We present an axiomatic way of assigning probabilities to black box models. In particular, we quantify an upper bound for probability of a model or in terms of information theory, a lower bound for amount of information that is stored in a model. In our setup, maximizing probabilities of models is equivalent to removing assumptions or information stored in the model. Furthermore, we represent the problem of learning from an alternative view where the underlying probability space is considered directly. In this perspective both the true underlying model and the model at hand are events. Consequently, the problem of learning is represented as minimizing the probability of the symmetric difference of the model and the true underlying model. 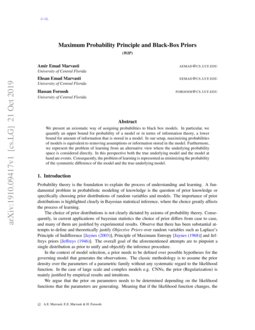 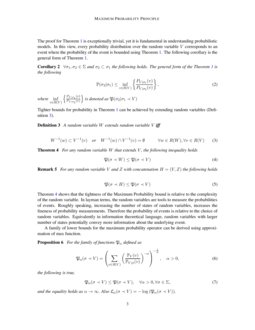 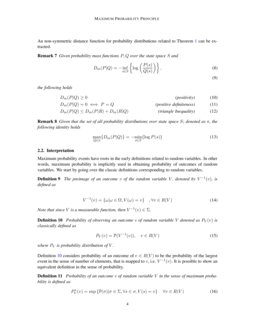 Probability theory is the foundation to explain the process of understanding and learning. A fundamental problem in probabilistic modeling of knowledge is the question of prior knowledge or specifically choosing prior distributions of random variables and models. The importance of prior distributions is highlighted clearly in Bayesian statistical inference, where the choice greatly affects the process of learning.

The choice of prior distributions is not clearly dictated by axioms of probability theory. Consequently, in current applications of bayesian statistics the choice of prior differs from case to case, and many of them are justified by experimental results. Observe that there has been substantial attempts to define and theoretically justify Objective Priors

over random variables such as Laplace’s Principle of Indifference [

[jaynes1968prior]] and Jeffreys priors [[jeffreys1946invariant]]. The overall goal of the aforementioned attempts are to pinpoint a single distribution as prior to unify and objectify the inference procedure.

In the context of model selection, a prior needs to be defined over possible hypotheses for the governing model that generates the observations. The classic methodology is to assume the prior density over the parameters of a parametric family without any systematic regard to the likelihood function. In the case of large scale and complex models e.g. CNNs, the prior (Regularization) is mainly justified by empirical results and intuitions.

Finally, the practical perspective and the consequences of our contribution is represented in Section 2.3.

where infv∈R(V){PV|σ1(v)PV|σ2(v)} is denoted as P(σ2|σ1≺V) Tighter bounds for probability in Theorem 2.1 can be achieved by extending random variables (Definition 2.1).

For any random variable W that extends V, the following inequality holds

For any random variable V and Z with concatenation H=(V,Z) the following holds

A family of lower bounds for the maximum probability operator can be derived using approximation of max function. For the family of functions Pα defined as

the following is true,

and the equality holds as α→∞. Also Lα(σ≺V)=−log(Pα(σ≺V)). An non-symmetric distance function for probability distributions related to Theorem 2.1 can be extracted. Given probability mass functions P,Q over the state space S and

Given that the set of all probability distributions over state space S; denoted as π, the following identity holds

Note that since V is a measurable function, then V−1(v)∈Σ.

Definition 2.2 reveals a principle hidden in definition 2.2 and 2.2, while Proposition 2.2 shows the equivalence of the two definitions. Preimage of an outcome v coincides with the most probable event being mapped to v because of the monotonicity of probability measures. Definition 2.2 highlights what we call the Maximum Probability Principle, which is described in the following statement.

While there are potentially many events leading to the outcome v, one considers the set of events with the highest probability. Consequently, probability of outcome v is the probability of the most probable event that is mapped to outcome v.

In Contrast, we define a Model as an event; M∈Σ, where the distribution of the random variable given a model is PV|M. Furthermore, an Oracle M∗∈Σ, is assumed, where the observed outcomes are generated from PV|M∗. The Oracle is the underlying probability model that our model is approximating. It is evident that with the maximum probability operator, one can calculate the maximum probability of models. As opposed to the classical formulations where a probability density is assumed on the parameters, in our perspective each model has a probability mass. From the perspective of information, the minimum information of a model can be interpreted as the information or assumptions that are stored in the model. In this section, we assume that the true distribution of the oracle PV|M∗ is given, to find an objective function in the ideal scenario. The consequences of using the empirical distribution of the oracle is not in the scope of this paper.

where (x)+=x(sign(x)+1)/2 for x∈R Probability of symmetric difference of two sets M⊂Ω, M∗⊂Ω and it’s complement is bounded by the following

Probability of symmetric difference of two sets M⊂Ω, M∗⊂Ω is bounded by the following when V is a random variable defined over Ω

The above lemmas provide a guideline for optimization of models. To summarize, the bounds in Lemma 2.3 can be calculated when P(V=i) is defined since P(M|V=i)=P(V=i|M)P(M)/P(V=i). We use Theorem 2.1. to calculate upper-bound of P(M) and P(M∗). In the next section, we explain the practical process briefly, by considering the upper bounds of probability measures when using stochastic models with hidden states.

As a toy example, consider the following classification problem where the set {xi,yi}ni=1 is given as the observations. Furthermore, Consider the model M characterized by θ∈Rn, determining a conditional probability model, namely P(Y,H|X,M) where X,Y are random variables associated with the i.i.d observations and H is the internal random variable. Note that M does not necessarily assume a probability distribution over X. The empirical distribution of X given by the available data can be used as P(X|M). However in this section we consider the general case that the model M

assumes a joint distribution over

The first step toward the formulation of the problem is to assume a probability distribution over random variables under the sample space Ω. We use Laplace principle of indifference to determine the prior conditional distribution. According to Laplace’s Principle a uniform probability distribution over Y,H,X should be assumed, i.e. P(Y=y,H=h,X=x)=1|R(Y)||R(H)||R(X)| where |R(H)| is the cardinality of the range of H. We introduce the random variable Z=[Y;H;X] to simplify the derivations. The objective function is constructed as

To optimize L using gradient methods, first we need to obtain the partial derivative of objective function with respect to parameters of the model; θ

. We use the chain rule to obtain

is the index for components of vector

θ. Considering (24), the first part of the total derivative is equal to

) can be approximated with Monte Carlo approximation, where the final optimization process is noisy. Stochastic Gradient Descent is empirically proven to be successful in Machine Learning community. The popular example of noisy optimization is Stochastic Gradient Descent, where the gradients are in the form of expectations over the empirical distribution and consequently are approximated with Monte Carlo.

The distribution defined by (27) is not explicitly known. We use rejection sampling to draw samples from (27). The samples are drawn from P(Z=z) and accepted with probability P(M¯¯¯¯¯ΔM∗|Z=z;θ). The empirical distribution of the accepted samples converges to (27). We showed the general bounds for P(M¯¯¯¯¯ΔM∗|Z=z;θ) in (21); however, we assume that M∗ and M are independent events conditioned on Z without loss of generality. Under the conditional independence assumption, we can conclude that

Bayes rule can be used to obtain P(M|Z=z;θ)

On the other hand, the quantities in (31) and (29) are computationally tractable. Therefore (27) can be sampled efficiently within the computational constraints imposed by rejection sampling i.e. probability of rejecting a sample. Since the upper-bound in (31) can be calculated in a deterministic fashion, the computational graph is available during training. Consequently, the gradients with respect to θ

are backpropagated according to the computational graph.

We introduced a new perspective on the probabilities of events when observing random variables. This perspective directly affects and simplifies the definition of probabilistic models and their probability. Classically, a prior distribution were assumed over the parameters of a model without any systematic regard on the models functionality. In contrast to classic perspective, we obtain the prior distribution over models by directly considering their functionality. Specifically, every model represents an event in the probability space. The maximum probability bound presented in this paper provides an upper bound for probability of the corresponding event.

Appendix A Classic View of Inferrence

To begin, we start with a popular methodology; Bayesian Inference and highlight the complications arising in assuming prior over parameters of models.

Consider a fairly simple example of a single coin flip, with possible outcomes {H,T} of the random variable C. The goal is to approximate the true probability distribution over the outcomes of a single flip represented by vector θ∗.

Pθ(.) is a density function over the simplex, representing our belief about the coin, prior to observations. Since Pθ does not depend on the evidence, it can be set to any pdf over the simplex and yet not conflict with any of the existing foundations of probability theory. In this example, although the observable random variables had finitely many states, the space of models contain uncountable states and the prior distribution over parameters compared to that of random variables is disproportionately complex. The choice of prior here would change the outcome of inference, especially when the observations are limited. The Bayesian perspective is rooted in Kolmogorov’s formulation of probability theory [[jaynes2003probability]]. It is insightful to visualize and understand the construction of Bayesian formalism within the underlying probability space. The underlying methodology consists of the following probabilistic construction. Given a probability space ⟨P,Ω,Σ⟩, and observable random variable C, we introduced an auxiliary random variable θ(parameters) with prior pdf Pθ and a likelihood function PC|θ. Therefore the posterior distribution over θ is determined given observations and Bayes rule. The visual procedure in the probability space is depicted in Figure 2. Note that the parameters in the aforementioned construction are usually not observable and are numerical representatives of models.

since above is true for all v then the following holds

The proof directly follows from the proof of the Theorem 2.1 by replacing Ω with σ1.

Since W is extends V and ∀w,W−1(w) is either the subset of some particular V−1(v) or does not have intersection above equation would reduce to

From the proof of Theorem 2.1 we can write

for all v∈R(V) we can write

Since (42) is valid for all possible outcomes of V, the inequality is valid for the outcomes that achieves the minimum of the left-hand side of (42). Consequently

the proof follows from Theorem 2.1, if H is extending V. By definition of (V,Z), for every state h∈R(H), H−1(h)=V−1(vh)∩Z−1(zh) for some zh∈R(Z),vh∈R(V). Therefore every state of H is either a subset of some partition induced by V or does not have intersection with it. Therefore H extends V.

where the equality holds as α→∞. (Lemma) Let us denote supi{ai}=a∗

since there exist at least an element in the set having the same value as supremum of the set, log(∑ieα(ai−a∗))=log(1+C) for some positive constant C and therefore positive. since α>0. Therefore (47) is greater than the supremum. In the limit case since

We can use the fact that supi{ai}=−infi{−ai} to prove the lemma for the infimum case. by directly using the inequlity in Lemma (47) we can show that

and by negating and exponentiating the above inequality we get