We propose an iterative algorithm that computes the maximum-likelihood estimate in quantum state tomography. The optimization error of the algorithm converges to zero at an O ( ( 1 / k ) log D ) rate, where k denotes the number of iterations and D denotes the dimension of the quantum state. The per-iteration computational complexity of the algorithm is O ( D ^ 3 + N D ^2 ), where N denotes the number of measurement outcomes. The algorithm can be considered as a parameter-free correction of the R ρ R method [A. I. Lvovsky. Iterative maximum-likelihood reconstruction in quantum homodyne tomography. J. Opt. B: Quantum Semiclass. Opt. 2004] [G. Molina-Terriza et al. Triggered qutrits for quantum communication protocols. Phys. Rev. Lett. 2004.]. 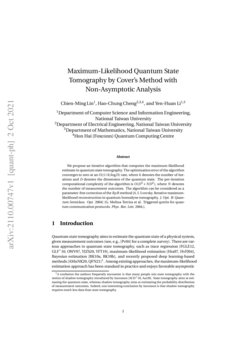 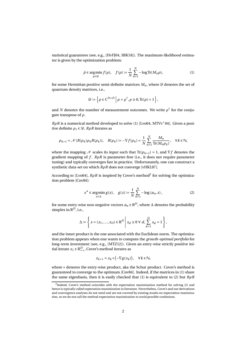 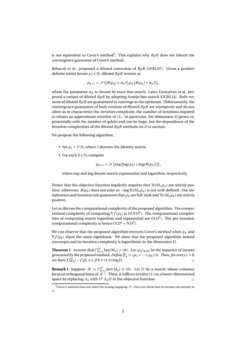 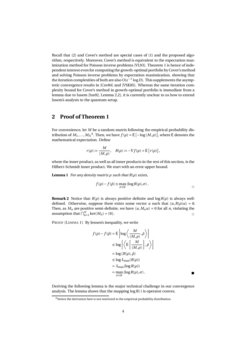 We propose, to the best of our knowledge, the first online algorithm for...
Chien-Ming Lin, et al. ∙

A comparative study of estimation methods in quantum tomography

We have developed an efficient algorithm for the maximum likelihood join...
Leonid I. Perlovsky, et al. ∙

[Ahmed2020, Quek2021]111A confusion the authors frequently encounter is that many people mix state tomography with the notion of shadow tomography introduced by Aaronson [Aaronson2018, Aaronson2020]

and N denotes the number of measurement outcomes. We write ρ† for the conjugate transpose of ρ.

where the mapping N scales its input such that Tr(ρk+1)=1, and ∇f denotes the gradient mapping of f. RρR is parameter-free (i.e., it does not require parameter tuning) and typically converges fast in practice. Unfortunately, one can construct a synthetic data-set on which RρR does not converge [Rehacek2007].

According to [Lvovsky2004], RρR is inspired by Cover’s method222

for some entry-wise non-negative vectors

denotes the probability simplex in

and the inner product is the one associated with the Euclidean norm. The optimization problem appears when one wants to compute the growth-optimal portfolio for long-term investment (see, e.g., [MacLean2012]). Given an entry-wise strictly positive initial iterate x1∈RD++, Cover’s method iterates as

where ∘ denotes the entry-wise product, aka the Schur product. Cover’s method is guaranteed to converge to the optimum [Cover1984]. Indeed, if the matrices in (1) share the same eigenbasis, then it is easily checked that (1) is equivalent to (2) but RρR is not equivalent to Cover’s method333Cover’s method does not need the scaling mapping N. One can check that its iterates are already in Δ.. This explains why RρR does not inherit the convergence guarantee of Cover’s method.

grows exponentially with the number of qubits and can be huge, but the dependence of the iteration complexities of the diluted

RρR methods on D is unclear.

We propose the following algorithm.

Suppose K\coloneqq⋂Nn=1ker(Mn)≠\set0. Let U be a matrix whose columns form an orthogonal basis of K⊥. Then, it suffices to solve (1) on a lower-dimensional space by replacing An with U†AnU in the objective function. □

Recall that (2) and Cover’s method are special cases of (1) and the proposed algorithm, respectively. Moreover, Cover’s method is equivalent to the expectation maximization method for Poisson inverse problems [Vardi1993]. Theorem 1 is hence of independent interest even for computing the growth-optimal portfolio by Cover’s method and solving Poisson inverse problems by expectation maximization, showing that the iteration complexities of both are also O(ε−1logD). This supplements the asymptotic convergence results in [Cover1984] and [Vardi1985]. Whereas the same iteration complexity bound for Cover’s method in growth-optimal portfolio is immediate from a lemma due to Iusem [Iusem1992, Lemma 2.2], it is currently unclear to us how to extend Iusem’s analysis to the quantum setup.

be a random matrix following the empirical probability distribution of

M1,…,MN444Notice the derivation here is not restricted to the empirical probability distribution.. Then, we have , where E denotes the mathematical expectation. Define

For any density matrix ρ such that R(ρ) exists,

Notice that R(ρ) is always positive definite and logR(ρ) is always well-defined. Otherwise, suppose there exists some vector u such that . Then, as Mn are positive semi-definite, we have for all n, violating the assumption that ⋂Nn=1ker(Mn)=\set0. □

By Jensen’s inequality, we write

Deriving the following lemma is the major technical challenge in our convergence analysis. The lemma shows that the mapping logR(⋅) is operator convex.

For any density matrix σ, the function is convex. □

which is positive semi-definite by an extension of the Cauchy-Schwarz inequality due to Lavergne [Lavergne2008]555Whereas Lavergne considers the real matrix case, we notice the proof directly extends to the Hermitian matrix case.. ■

Now, we are ready to prove Theorem 1.

By the Golden-Thompson inequality, we write

Therefore, by the iteration rule of the proposed algorithm and operator motononicity of the matrix logarithm, we have

Then, for any K∈N, we write