We discuss maximum likelihood estimation of parameters for models governed by a stochastic differential equation driven by a mixed fractional Brownian motion with random effects. 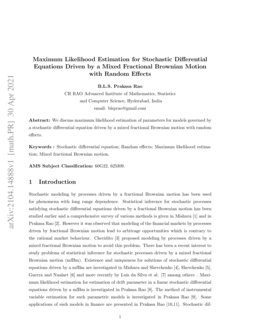 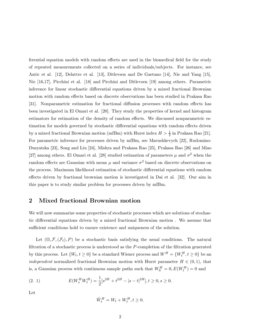 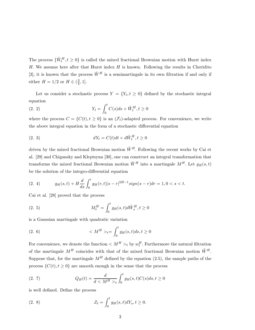 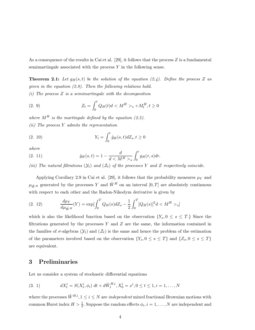 This paper focuses on the estimation of smoothing distributions in gener...
Pierre Gloaguen, et al. ∙

σ2 based on discrete observations on the process. Maximum likelihood estimation of stochastic differential equations with random effects driven by fractional brownian motion is investigated in Dai et al. [32]. Our aim in this paper is to study similar problem for processes driven by mfBm.

We will now summarize some properties of stochastic processes which are solutions of stochastic differential equations driven by a mixed fractional Brownian motion . We assume that sufficient conditions hold to ensure existence and uniqueness of the solution. Let (Ω,F,(Ft),P) be a stochastic basis satisfying the usual conditions. The natural filtration of a stochastic process is understood as the P-completion of the filtration generated by this process. Let {Wt,t≥0} be a standard Wiener process and WH={WHt,t≥0} be an independent normalized fractional Brownian motion with Hurst parameter H∈(0,1), that is, a Gaussian process with continuous sample paths such that WH0=0,E(WHt)=0 and

The process {~WHt,t≥0} is called the mixed fractional Brownian motion with Hurst index H. We assume here after that Hurst index H is known. Following the results in Cheridito [3], it is known that the process ~WH is a semimartingale in its own filtration if and only if either H=1/2 or H∈(34,1]. Let us consider a stochastic process Y={Yt,t≥0} defined by the stochastic integral equation

where the process C={C(t),t≥0} is an (Ft)-adapted process. For convenience, we write the above integral equation in the form of a stochastic differential equation

is a Gaussian martingale with quadratic variation

For convenience, we denote the function <MH>t by wHt. Furthermore the natural filtration of the martingale MH coincides with that of the mixed fractional Brownian motion ~WH. Suppose that, for the martingale MH defined by the equation (2.5), the sample paths of the process {C(t),t≥0} are smooth enough in the sense that the process

is well defined. Define the process

(i) The process Z is a semimartingale with the decomposition

where MH is the martingale defined by the equation (2.5).

(iii) The natural filtrations (Yt) and (Zt) of the processes Y and Z respectively coincide.

Applying Corollary 2.9 in Cai et al. [29], it follows that the probability measures

μY and μ~WH generated by the processes Y and ~WH on an interval [0,T] are absolutely continuous with respect to each other and the Radon-Nikodym derivative is given by

Let us consider a system of stochastic differential equations

where the processes ~WH,i,1≤i≤N are independent mixed fractional Brownian motions with common Hurst index H>12. Suppose the random effects ϕi,i=1,…,N are independent and identically distributed as that of the distribution of ϕ.

We assume that the random variables

ϕ1,…,ϕN are independent of the random processes {~WH,i,i=1,…,N} and sufficient conditions hold for the existence and uniqueness of the solutions for the system (3.1). See Mishura and Shevchenko [4], Shevchenko [5], Guerra and Nualart [6] and Luis da Silva [7] for sufficient conditions on the function S(.,.) for the existence and uniqueness of the solution for the system (3.1). The problem is to estimate the unknown parameters based on the set of observations {Xi(t),0≤t≤T;i=1,…,N} and study the asymptotic properties of the estimators as N tends to infinity. Here after we assume that the random effect ϕ

has a probability density function

g(ψ,θ) with respect to a σ-finite measure ν(.) on Rd and it is known but for the parameter θ=(θ1,…,θk)∈Θ∈Rk which is unknown. The problem is to estimate the parameter θ based on the observations {Xi(t),0≤t≤T},i=1,…,N. Let Pψ denote the probability measure generated by the process Xi over the interval [0,T] when ψ is the observe value of the random effect. Let ψ0 be another value of ψ. From the results in Section 2, it follows that, given ψ, the log-likelihood ratio, based on the observation of the process Xi over the interval [0,T], is given by

as defined by the equation (2.7). Without loss of generality, suppose that the parameter ψ0 satisfies the condition S(x,ψ0)=0. Then the log-likelihood function, given ψ, can be written in the form

Since the parameter ϕ has the probability density g(ψ,θ) with respect to the σ-finite measure ν(.), it follows that the likelihood function based on the observation of the process Xi over the interval [0,T], is given by

and the likelihood function based on the processes {Xi(t),0≤t≤T},i=1,…,N is given by

Suppose there exists an estimator ^θN defined by the relation

The estimator ^θN is called a maximum likelihood estimator (MLE) of the parameter θ. Existence and uniqueness of the MLE can be ensured under some conditions on the function λ(f,θ) and the parameter space Θ. (cf. Prakasa Rao [33]). Under standard regularity conditions on the function λ(f,θ), it can be shown that the MLE ^θn based on i.i.d. observations is consistent and asymptotically normal as N→∞ in the sense that

See Theorems 16.2 and Theorem 16.3, DasGupta [34] among others for details about the asymptotic theory of maximum likelihood estimators based on independent and identically distributed observations. We omit the details.

Observe that the processes Xi≡{Xi(t),0≤t≤T} are independent and identically distributed. From the computations given in the Sections 2 and 3, it is easy to check that the likelihood function based on these observed data is given by

for i=1,…,N. Maximizing the likelihood function, we obtain the maximum likelihood estimator of the parameter θ. Special case: Suppose that the functions g(ψ,θ) and the σ-finite measure ν(ψ) are such that g(ψ,θ)dν(ψ) is the Gaussian probability density with mean μ and variance σ20. Here θ=(μ,σ20). Following the computations similar to those given in Dai et al. (2020), it can be shown that, if the parameter σ20 is known, then the MLE ^μN of μ is given by

then, by the Strong law of large numbers (SLLN) for independent and identically distributed random variables (i.i.d.), it follows that

Applying the SLLN for i.i.d. random variables, it follows that

Applying the standard central limit theorem for independent and identically distributed random variables, it can be checked that

in distribution as N→∞. If both the parameters μ and σ20 are unknown, then the MLEs ^μN and ^σ20,N of μ and σ20 are given by the system of equations

but the explicit computation of the estimators ^μN and ^σ20,N and study of their asymptotic properties as N tends to infinity is cumbersome. Acknowledgment: This work was supported under the scheme “INSA Senior Scientist” by the Indian National Science Academy at the CR Rao Advanced Institute for Mathematics, Statistics and Computer Science, Hyderabad 500046, India. References