Ultra-reliability and low latency communication plays an important role in the fifth and sixth generation communication systems. Among the different research issues, scheduling as many users as possible to serve on the limited time-frequency resource is a crucial topic, with requirement of the maximum allowable transmission power and the minimum rate requirement of each user.We address it by proposing a mixed integer programming model, with objective function is maximizing the set cardinality of users instead of maximizing the system sum rate. Mathematical transformations and successive convex approximation are combined to solve the problem. Numerical results show that the proposed method achieves a considerable performance compared with exhaustive search method, but with lower computational complexity. 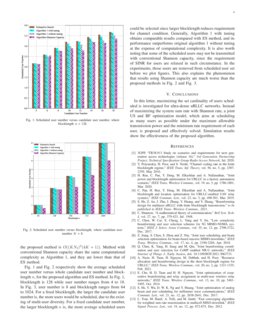 The 3rd generation partnership project (3GPP) proposes the general requirement of ultra-reliability and low latency communication (uRLLC) to be 99.999% (block error rate of 10−5) for one transmission of a 32 bytes packet with 1 ms latency [1]. Recently, discussions on the property of achievable rate with finite blocklength transmission are one hot topic for uRLLC [2]. The authors of [3]

consider four fundamental downlink transmission schemes and aimed for jointly optimizing the blocklength and power allocation to minimize the decoding error probability of the actuator. The authors of

[4] proposed a novel perturbation-based iterative algorithm to jointly optimize the blocklength allocation and the UAV’s location. Recently, the authors of [5] obtained an analytical condition under which the minimum rate requirement of any user can be satisfied.

For multiuser multi-antenna communication systems, a popular topic is joint beamforming (BF) and user selection (US), which could be formulated as non-convex mixed integer programming problem. It was usually studied based on conventional Shannon capacity [6]. The authors of [7] proposed a low complexity BF and US scheme for the downlink multiple input multiple output-based non-orthogonal multiple access (MIMO-NOMA) system, but the non-convex problem was handled by independently tracking two subproblems, namely, BF scheme and greedy min-power US scheme, instead of jointly solving them. The authors of [8] investigated the joint user scheduling and analog beam selection problem for codebook-based massive MIMO downlink systems with hybrid antenna architecture. Its optimization objective function was maximizing user rate with allowable transmission power constraint and a 0−1 diagonal digital precoding matrix, but without considering the demand of minimum rate of each user. The authors of [9] considered the joint coordinated BF and US for coordinated multi-point enabled new radio in unlicensed spectrum networks, with also aiming at maximizing the throughput instead of considering the rate demand for each user.

In this letter, we consider a downlink multiuser uRLLC system, including a multi-antenna BS and K single antenna users. The BS is assumed to be equipped with Nt transmitting antennas and K≥Nt. For simplicity, let K={1,2,⋯,K} and S={1,2,⋯,K∗}⊆K be the set of all users and served users, respectively, where K∗≤K. Let wk∈CNt×1 and sk

where nk denotes the additive white Gaussian noise with CN(0,σ2k) at the k-th user. Thus, the signal-to-interference-plus-noise ratio (SINR) of the k-th user is calculated as (2) with ¯¯¯¯hk=hkσk.

The achievable rate with taking into the desirable decoding error probability ϵ and finite blocklength n (or the number n of channels used) account is described as [2, 10]

It is not difficult to find that compared to the classical Shannon capacity, the achievable transmission rate defined in (3) takes the error probability into account, i.e., the second item in the right-hand of (3). It also means that this is a more conservative description of channel capacity.

In order to effectively achieve the multiuser diversity gain and assure each user obtain a minimum achievable rate i.e., R(γk)≥rk>0, we need to carefully schedule the set S of served users. To schedule as many users as possible under the condition of the requirement of minimum user rate and the maximum allowable transmitting power, the joint BF and US problem is formulated as follows

In (5a), |S| denotes the cardinality of set S. Note that problem (5) is non-convex problem and thus is hard to obtain the solution directly. Furthermore, due to the uncertainty of user scheduling set S, problem (5) is essentially an uncertainty problem. Generally speaking, brute exhaustive searching may be an effective selection for solving the considered problem at the cost of high computational complexity, especially for a large number of users to be scheduled.

To release the uncertainty of user scheduling set S and obtain a tractable form of problem (5), we introduce auxiliary variable κk to be an indicator of user scheduling. Specifically, if κk=1, the k-th user is scheduled as a communication user, i.e., k∈S. Otherwise, κk=0 means that the k-th user is not scheduled as a communication user, i.e., k∉S. Let κ=[κ1,κ2,⋯,κk,⋯,κK]T, thus, we can rewrite equivalently problem (5) as follows

Problem (6) is an equivalent form of problem (5) and the main goal of objective functions (6a) is to assure that as many users as possible are scheduled. Problem (6) is complicated for two reasons. Firstly, capacity formula R(γk) in constraint  (6b) is non-convex nor non-concave, with a square root and inverse form of γk. Secondly, constraint (6c) make it be a mixed integer continuous programming problem and also brings difficulties. Generally speaking, it is very difficult to obtain the global optimal solution of problem (6), even the local optimal solution.

In what follows, we focus on designing an effective iterative optimization algorithm to solve problem (6) using a series of basic mathematical operations. According to the conclusion in [5], constraint (6b) can be transformed equivalently into new constraint expressed as SINR form with following form:

where ˜γk is the minimum SINR for achieving the minimum rate rk and can be obtained via using the conclusion obtained in [5]. Similar to the method used in [11], problem (7) can be equivalently rewritten into the following form

Constraints (8b) and (8c) assure that the value of κk equals to either one or zero, i.e., κk∈{0,1}, ∀k∈K. Once the optimal solution is obtained, the inequality constraint (8e) is activated.

According to [11, Proposition 2], we resort to solve problem (8) via solving problem (9) by appropriately choosing μ>0.

For fixed μ, the main difficulties of solving problem (9) are the difference of convex (DC) constraint (9a) and (8d), which are nonconvex, since the remaining constraints are convex. This means that problem (8) is still a DC optimization problem. Fortunately, note that function κ2k is convex, while function ∣∣hHkwk∣∣2φk is quadratic-over-affine function, which is jointly convex w.r.t. the involved variables.

In the sequel, we resort to solve problem (9) via using successive convex approximation methods [12]. Using the convexity of function h(κ), we have

where h′(κk)=2μ(κk+(∑k∈Kκk)) and the superscript τ denotes the τ-th iteration of the iterative algorithm presented shortly. Note that ϕ(κ) is in fact the first-order Taylor series expansion approximation of function h(κ) around the point κ(τ)k. Similarly, using the convex property of function ∣∣hHkwk∣∣2φk, we can obtain their low boundary approximation as follows

From the aforementioned discussions, the convex approximation problem solved at the (τ+1)-th iteration of the proposed algorithm is given by

An iterative algorithm summarized as Algorithm 1 is outlined for solving problem (13), where ς(τ) denotes the objective value of optimization problem (13) at the τ-th iteration iteration. To speed up the convergence of Algorithm 1, we can first filter out the users who meet constraints (5b) and (5c) by solving single user communication with maximum ratio transmission and full power transmission.

Constraint (6c) is equivalently transformed into constraints (8b) and (8c), therefore, original integer programming problem is transformed into an equivalent continuous optimization problem. For convex problem (13), its optimal solution of the τ-th iteration is also a feasible point of the problem in the (τ+1)-th iteration. Therefore, Algorithm 1 is a non-increasing process. Besides, the power constraint (8f) limits the lower bound of the problem and guarantees the convergence of iteration[13].

In Algorithm 1, μ should be carefully tuned as it penalizes the objective function for any κk that is not equal to 0 or 1. A larger value of μ could help to speed up the convergence of iteration procedure, but may face the problem of missing some users. In this letter, a smaller value of μ would be chosen to find a better solution of (13) for the same initial solution. Meanwhile, an additional tuning process is adopted after Algorithm 1 to solve the problem that the values of κk may be between zero and one with small μ. The tuning process begins by carefully initializing beamforming vector wk. In particular, the k-th user with its value κk between 0 and 1 will be chosen, its beamforming vector is set to be 0, and the whole optimization steps 2-4 is executed. The algorithm with and without tuning operations are respectively referred as Algorithm 1 - with tuning and Algorithm 1 - without tuning.

In this section, numerical results are presented to evaluate the performance of the proposed algorithms. Channel coefficient hk from the BS to the k-th user is modeled as hk=√ϱk˜hk, where the channel power ϱk is given as ϱk=1/(1+(dk/d0)ϱ) with dk being the distance between the BS and the k-th user, d0 and ϱ respectively denoting the reference distance and the fading exponent. The elements of hk are independent and identically distributed (i.i.d.) with CN(0,1)

. All users have the same noise variance, i.e.,

σ2k=σ2, ∀k∈K. For easy of notation, we define the SNR as SNR =10log10(Pσ2) in dB. The main parameters are listed as follows: ϱ = 3, reference distance d0 = 30 m, cell radius is 300 m, ϵ = 10−6, antenna number Nt = 4, and SNR = 10 dB. Since there exists no published work on maximizing users via joint BF and US for uRLLC with finite blocklength transmission. We could only compare the proposed algorithm with exhaustive search (ES) method, with feasibility criterion as in [5, IV-D], and the method using conventional Shannon capacity, where the problem could be realized via solving (13c) with replacing ~γk with ~γ∗k=2Dn−1. Note that the computational complexity of ES method is O(K∑^k=1C^kK(^kNt)3(K−^k+1)^k), where C^kK is combinatorial number. Computational complexity of the proposed method is O((KNt)3(4K+1)). Method with conventional Shannon capacity share the same computational complexity as Algorithm 1, and they are lower than that of ES method.

Fig. 1 and Fig. 2 respectively show the average scheduled user number versus whole candidate user number and blocklength n, for the proposed algorithm and ES method. In Fig. 1, blocklength is 128 while user number ranges from 4 to 18. In Fig. 3, user number is 8 and blocklength ranges from 64 to 1024. For a fixed blocklength, the larger the candidate user number is, the more users would be scheduled, due to the existing of multi-user diversity. For a fixed candidate user number, the larger blocklength n is, the more average scheduled users could be selected since larger blocklength reduces requirement for channel condition. Generally, Algorithm 1 with tuning obtains comparable results compared with ES method, and its performance outperforms original algorithm 1 without tuning at the expense of computational complexity. It is also worth noting that some of the scheduled users may not be transmitted with conventional Shannon capacity, since the requirement of SINR for users are relaxed in such circumstance. In the experiments, those users are removed from scheduled user set before we plot figures. This also explains the phenomenon that results using Shannon capacity are much worse than the proposed methods in Fig. 2 and Fig. 3.

In this letter, maximizing the set cardinality of users scheduled is investigated for ultra-dense uRLLC networks. Instead of maximizing the system sum rate with Shannon rate, a joint US and BF optimization model, which aims at scheduling as many users as possible under the maximum allowable transmission power and the minimum rate requirement of each user, is proposed and effectively solved. Simulation results show the effectiveness of the proposed algorithm.