In many situations, Miniature Aerial Vehicles (MAVs) are limited to using only on-board sensors for navigation. This limits the data available to algorithms used for stabilization and localization, and current control methods are often insufficient to allow reliable hovering in place or trajectory following. In this research, we explore using machine learning to predict the drift (flight path errors) of an MAV while executing a desired flight path. This predicted drift will allow the MAV to adjust it's flightpath to maintain a desired course. 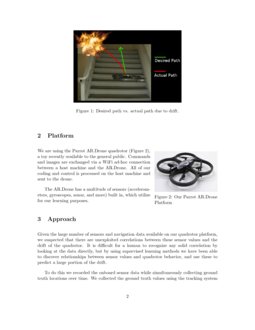 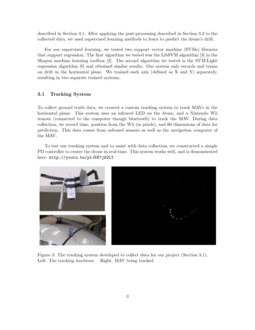 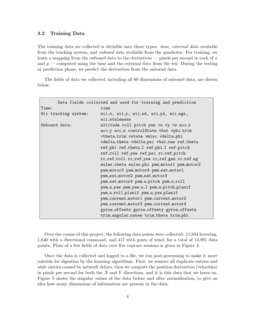 Past automation work with miniature aerial vehicles (MAVs) at Cornell has produced interesting results [1] and presented additional challenges. During past projects, results have often been limited not by insufficiencies in planning algorithms, but by navigation errors stemming from inadequate control in the face of realistic, breezy operating environments. In many cases the MAVs will simply drift off the desired path (path.jpg). Thus, this project focuses on refining the basic motion of the same platform, and in particular, minimizing its drift.

Our work focuses on reduction of low frequency drift in gps-denied environments. Similar work has been done, some using neural networks

[4] or using adaptive-fuzzy control methods [5] to stabilize a quadrotor. Though this research has produced promising results, these methods were demonstrated only in simulation, not via live testing.

path.jpg.6Desired path vs. actual path due to drift.

We are using the Parrot AR.Drone quadrotor (quadrotor), a toy recently available to the general public. Commands and images are exchanged via a WiFi ad-hoc connection between a host machine and the AR.Drone. All of our coding and control is processed on the host machine and sent to the drone.

The AR.Drone has a multitude of sensors (accelerometers, gyroscopes, sonar, and more) built in, which utilize for our learning purposes.

Given the large number of sensors and navigation data available on our quadrotor platform, we suspected that there are unexploited correlations between these sensor values and the drift of the quadrotor. It is difficult for a human to recognize any solid correlation by looking at the data directly, but by using supervised learning methods we have been able to discover relationships between sensor values and quadrotor behavior, and use these to predict a large portion of the drift.

To do this we recorded the onboard sensor data while simultaneously collecting ground truth locations over time. We collected the ground truth values using the tracking system described in trackingsystem. After applying the post-processing described in data to the collected data, we used supervised learning methods to learn to predict the drone’s drift.

For our supervised learning, we tested two support vector machine (SVMs) libraries that support regression. The first algorithm we tested was the LibSVM algorithm

[3] in the Shogun machine learning toolbox [2]. The second algorithm we tested is the SVM-Light regression algorithm [6] and obtained similar results. Our system only records and trains on drift in the horizontal plane. We trained each axis (defined as X and Y) separately, resulting in two separate trained systems.

To collect ground truth data, we created a custom tracking system to track MAVs in the horizontal plane. This system uses an infrared LED on the drone, and a Nintendo Wii remote (connected to the computer though bluetooth) to track the MAV. During data collection, we record time, position from the Wii (in pixels), and 60 dimensions of data for prediction. This data comes from onboard sensors as well as the navigation computer of the MAV.

To test our tracking system and to assist with data collection, we constructed a simple PD controller to center the drone in real-time. This system works well, and is demonstrated here: http://youtu.be/ptJ6E7jW2LY.

The training data we collected is divisible into three types: time, external data available from the tracking system, and onboard data available from the quadrotor. For training, we learn a mapping from the onboard data to the derivatives — pixels per second in each of x and y — computed using the time and the external data from the wii. During the testing or prediction phase, we predict the derivatives from the onborad data.

The fields of data we collected, including all 60 dimensions of onboard data, are shown below:

Data fields collected and used for training and prediction

Over the course of this project, the following data points were collected: 11,934 hovering, 1,640 with a directional command, and 417 with gusts of wind, for a total of 13,991 data points. Plots of a few fields of data over five capture sessions is given in fiveruns.

fiveruns.75Some of the data collected from five manual runs. The first plot is time, the next six are external data from the Wii tracking system, and the rest represent a fraction of the 60 dimensions of internal data from the quadrotor’s sensors. Note that these graphs are not meant to be analyzed, but are presented merely as an example subset of the available features over time.

Once the data is collected and logged to a file, we run post-processing to make it more suitable for digestion by the learning algorithms. First, we remove all duplicate entries and stale entries caused by network delays, then we compute the position derivatives (velocities) in pixels per second for both the X and Y

directions, and it is this data that we learn on. svd_not_norm shows the singular values of the data before and after normalization, to give an idea how many dimensions of information are present in the data.

By training on data collected in the lab, we were able to predict quadrotor drift quite accurately. dec17_1_DataLog-1292574599_07_x.pdf shows the actual drift velocity versus the drift velocity predicted by our learned model. The predictions are not perfect, but they do match the actual drift quite well, certainly much better than the null hypothesis of no drift at all.

While dec17_1_DataLog-1292574599_07_x.pdf shows results while hovering and drifting in normal indoor conditions, in dec17_windplus_40_DataLog-1292576304_00_x.pdf we show results obtained by creating an artificially windy environment. We created this environment by waving a large board back and forth, buffeting the quadrotor. A model was then trained on a combination of windy and non-windy data and tested on other windy runs. As one can see in the figure, the quadrotor drifts significantly in one direction, and the prediction follows quite well.

Although our algorithm was able to accurately predict drift, we are still working on getting the prediction code to be fast enough to control the quadrotor in live flight. The SVM regression code runs quickly, but we’re currently facing difficulties with delays due to I/O as well as a suboptimal configuration. We integrated and tested a complete feedback loop, but delays caused it to be unstable.

We are making strong progress towards predicting and removing the quadrotor drift. The drift is predicted fairly accurately via a 60 dimensional sensor data vector from the quadrotor, and we hope to soon demonstrate a controller enhanced by the predicted drift.