Matrix rigidity and the Croot-Lev-Pach lemma

Matrix rigidity is a notion put forth by Valiant as a means for proving arithmetic circuit lower bounds. A matrix is rigid if it is far, in Hamming distance, from any low rank matrix. Despite decades of efforts, no explicit matrix rigid enough to carry out Valiant's plan has been found. Recently, Alman and Williams showed, contrary to common belief, that the 2^n × 2^n Hadamard matrix could not be used for Valiant's program as it is not sufficiently rigid. In this note we observe a similar `non rigidity' phenomena for any q^n × q^n matrix M of the form M(x,y) = f(x+y), where f:F_q^n → F_q is any function and F_q is a fixed finite field of q elements (n goes to infinity). The theorem follows almost immediately from a recent lemma of Croot, Lev and Pach which is also the main ingredient in the recent solution of the cap-set problem. 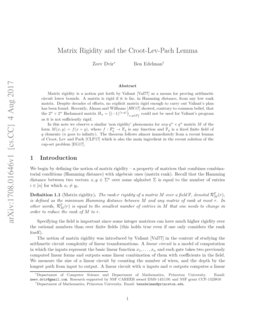 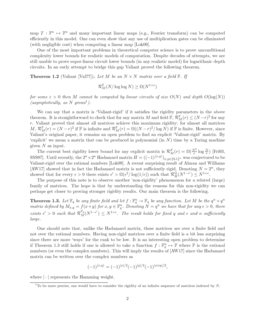 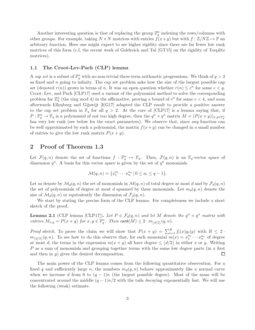 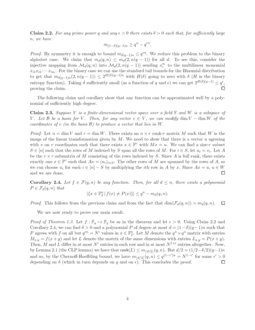 Fourier and Circulant Matrices are Not Rigid

The concept of matrix rigidity was introduced by Valiant(independently b...
C. Ramya, et al. ∙

On the Complexity of Learning with Kernels

A well-recognized limitation of kernel learning is the requirement to ha...
Nicolò Cesa-Bianchi, et al. ∙

We introduce a variant of PCPs, that we refer to as rectangular PCPs, wh...
Amey Bhangale, et al. ∙

In the classic apportionment problem the goal is to decide how many seat...
Claire Mathieu, et al. ∙

We begin by defining the notion of matrix rigidity – a property of matrices that combines combinatorial conditions (Hamming distance) with algebraic ones (matrix rank). Recall that the Hamming distance between two vectors

x,y∈Σn over some alphabet Σ is equal to the number of entries i∈[n] for which xi≠yi.

The rank-r rigidity of a matrix M over a field F, denoted RFM(r), is defined as the minimum Hamming distance between M and any matrix of rank at most r. In other words, RFM(r) is equal to the smallest number of entries in M that one needs to change in order to reduce the rank of M to r.

Specifying the field is important since some integer matrices can have much higher rigidity over the rational numbers than over finite fields (this holds true even if one only considers the rank itself).

The notion of matrix rigidity was introduced by Valiant [Val77]

in the context of studying the arithmetic circuit complexity of linear transformations. A

linear circuit is a model of computation in which the inputs represent the basic linear function x1,…,xn and each gate takes two previously computed linear forms and outputs some linear combination of them with coefficients in the field. We measure the size of a linear circuit by counting the number of wires, and the depth by the longest path from input to output. A linear circuit with n inputs and n outputs computes a linear map T:Fn↦Fn

and many important linear maps (e.g., Fourier transform) can be computed efficiently in this model. One can even show that any use of multiplication gates can be eliminated (with negligible cost) when computing a linear map

One of the most important problems in theoretical computer science is to prove unconditional complexity lower bounds for realistic models of computation. Despite decades of attempts, we are still unable to prove super-linear circuit lower bounds (in any realistic model) for logarithmic depth circuits. In an early attempt to bridge this gap Valiant proved the following theorem.

Let M be an N×N matrix over a field F. If

for some ε>0 then M cannot be computed by linear circuits of size O(N) and depth O(log(N)) (asymptotically, as N grows111To be more precise, one would have to consider the rigidity of an infinite sequence of matrices indexed by N.).

We can say that a matrix is ‘Valiant-rigid’ if it satisfies the rigidity parameters in the above theorem. It is straightforward to check that for any matrix M and field F, RFM(r)≤(N−r)2 for any r. Valiant proved that almost all matrices achieve this maximum rigidity: for almost all matrices M, RFM(r)=(N−r)2 if F is infinite and RFM(r)=Ω((N−r)2/logN) if F is finite. However, since Valiant’s original paper, it remains an open problem to find an explicit ‘Valiant-rigid’ matrix. By ‘explicit’ we mean a matrix that can be produced in polynomial (in N

) time by a Turing machine given

The current best rigidity lower bound for any explicit matrix is RFM(r)=Ω(N2rlogNr) [Fri93, SSS97]. Until recently, the 2n×2n Hadamard matrix H=((−1)⟨x,y⟩)x,y∈{0,1}n was conjectured to be Valiant-rigid over the rational numbers [Lok09]. A recent surprising result of Alman and Williams [AW17] showed that in fact the Hadamard matrix is not sufficiently rigid. Denoting N=2n, they showed that for every ϵ>0 there exists ϵ′>Ω(ϵ2/log(1/ϵ)) such that RQH(N1−ϵ′)≤N1+ϵ.

The purpose of this note is to observe another ‘non-rigidity’ phenomenon for a related (large) family of matrices. The hope is that by understanding the reasons for this non-rigidity we can perhaps get closer to proving stronger rigidity results. Our main theorem is the following.

Let Fq be any finite field and let f:Fnq→Fq be any function. Let M be the qn×qn matrix defined by Mx,y=f(x+y) for x,y∈Fnq. Denoting N=qn we have that for any ϵ>0, there exists ϵ′>0 such that RFqM(N1−ϵ′)≤N1+ϵ. The result holds for fixed q and ϵ and n sufficiently large.

One should note that, unlike the Hadamard matrix, these matrices are over a finite field and not over the rational numbers. Having non-rigid matrices over a finite field is a bit less surprising since there are more ‘ways’ for the rank to be low. It is an interesting open problem to determine if Theorem 1.3 still holds if one is allowed to take a function f:Fnq↦F where F is the rational numbers (or even the complex numbers). This will imply the results of [AW17] since the Hadamard matrix can be written over the complex numbers as

where |⋅| represents the Hamming weight.

Another interesting question is that of replacing the group Fnq indexing the rows/columns with other groups. For example, taking N×N matrices with entries f(x+y) but with f:Z/NZ↦F an arbitrary function. Here one might expect to see higher rigidity since there are far fewer low rank matrices of this form (c.f, the recent work of Goldreich and Tal [GT15] on the rigidity of Toeplitz matrices).

A cap set is a subset of Fnq with no non-trivial three-term arithmetic progressions. We think of q>2 as fixed and n going to infinity. The cap set problem asks how the size of the largest possible cap set (denoted r(n)) grows in terms of n. It was an open question whether r(n)≤cn for some c<q. Croot, Lev, and Pach [CLP17] used a variant of the polynomial method to solve the corresponding problem for Zn4 (the ring mod 4) in the affirmative, proving a bound of cn for some c<4, and soon afterwards Ellenberg and Gijswijt [EG17] adapted the CLP result to provide a positive answer to the cap set problem in Fq for all q>2. At the core of [CLP17] is a lemma saying that, if P:Fnq→Fq is a polynomial of not too high degree, then the qn×qn matrix M=(P(x+y))x,y∈Fnq has very low rank (see below for the exact parameters). We observe that, since any function can be well approximated by such a polynomial, the matrix f(x+y) can be changed in a small number of entries to give the low rank matrix P(x+y).

Let F(q,n) denote the set of functions f:Fnq↦Fq. Then, F(q,n) is an Fq-vector space of dimension qn. A basis for this vector space is given by the set of qn monomials

We start by stating the precise form of the CLP lemma. For completeness we include a short sketch of the proof.

To prove the claim we will show that P(x+y)=∑Ri=1fi(x)gi(y) with R≤2⋅m⌊d/2⌋(q,n). To see how to do this observe that, for each monomial m(x)=xa11⋯xann of degree at most d, the terms in the expression m(x+y) all have degree ≤⌊d/2⌋ in either x or y. Writing P as a sum of monomials and grouping together terms with the same low degree parts (in x first and then in y) gives the desired decomposition. ∎

The main power of the CLP lemma comes from the following quantitative observation. For a fixed q and sufficiently large n, the numbers md(q,n) behave approximately like a normal curve when we increase d from 0 to (q−1)n (the largest possible degree). Most of the mass will be concentrated around the middle (q−1)n/2

with the tails decaying exponentially fast. We will use the following (weak) estimate.

For any prime power q and any ϵ>0 there exists δ>0 such that, for sufficiently large n, we have

By symmetry it is enough to bound mδ(q−1)n≤qϵn. We reduce this problem to the binary alphabet case. We claim that md(q,n)≤md(2,n(q−1)) for all d. To see this, consider the injective mapping from Md(q,n) into Md(2,n(q−1)) sending xaii to the multilinear monomial xi1xi2⋯xiai

. For the binary case we can use the standard tail bounds for the Binomial distribution to get that

The following claim and corollary show that any function can be approximated well by a polynomial of sufficiently high degree.

Suppose V is a finite-dimensional vector space over a field F and W is a subspace of V. Let B be a basis for V. Then, for any vector v∈V, we can modify dimV−dimW of the coordinates of v (in the basis B) to produce a vector that lies in W.

Let n=dimV and r=dimW. There exists an n×r rank-r matrix M such that W is the image of the linear transformation given by M. We need to show that there is a vector u agreeing with v on r coordinates such that there exists x∈Fr with Mx=u. We can find a size-r subset S∈[n] such that the rows of M indexed by S span all the rows of M. For i∈S, let ui=vi. Let A be the r×r submatrix of M consisting of the rows indexed by S. Since A is full rank, there exists exactly one x∈Fr such that Ax=(ui)i∈S. The other rows of M are spanned by the rows of A, so we can choose ui for each i∈[n]−S by multiplying the ith row in A by x. Since Ax=u, u∈W and we are done. ∎

Let f∈F(q,n) be any function. Then, for all d≤n, there exists a polynomial P∈Fd(q,n) that

This follows from the previous claim and from the fact that dim(Fd(q,n))=md(q,n). ∎

We are now ready to prove our main result.