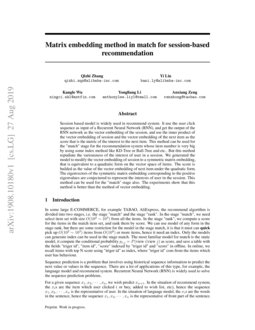 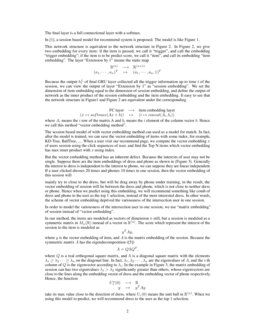 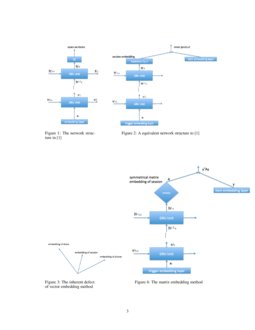 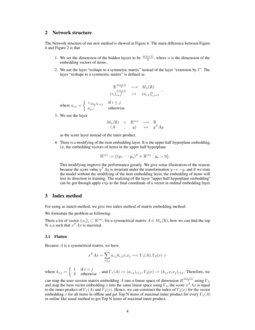 or more items, hence it need an index. Only the models can generate index can be used in the stage match. The most familiar model for match is the static model, it compute the conditional probability

pi,j=P(view i|view j) as score, and save a table with the fields "triger id", "item id", "score" indexed by "triger id" and "score" in offline. In online, we recall items with top N score using "triger id" as index, where "triger id" com from the items which user has behaviour.

Sequence prediction is a problem that involves using historical sequence information to predict the next value or values in the sequence. There are a lot of applications of this type, for example, the language model and recommend system. Recurrent Neural Network (RNN) is widely used to solve the sequence prediction problems.

The final layer is a full connectional layer with a softmax.

In SESSION_BASED , a session based model for recommend system is proposed. The model is like Figure 2.

where Ai means the i row of the matrix A and bi means the i element of the column vector b. Hence we call this method “vector embedding method”.

mainly try to close to the dress, but will be drag away by phone under training, in the result, the vector embedding of session will lie between the dress and phone, which is not close to neither dress or phone. Hence when we predict using this embedding, we will recommend something like comb of dress and phone to the user as the top 1 selection, instead of the most interested dress. In other words, the scheme of vector embedding deprived the variousness of the intersection user in one session.

In order to model the variousness of the intersection user in one session, we use “matrix embedding” of session instead of “vector embedding”.

In our method, the items are modeled as vectors of dimension n still, but a session is modeled as a symmetric matrix in Mn(R) instead of a vector in R(n). The score which represent the interest of the session to the item is modeled as

where Q is a real orthogonal square matrix, and Λ is a diagonal square matrix with the elements λ1≥λ2⋯≥λn on the diagonal line. In fact, λ1,λ2⋯,λn are the eigenvalues of A, and the i-th column of Q is the eigenvector according to λi. In the example in Figure 4, the matrix embedding of session can has two eigenvalues λ1>λ2 significantly greater than others, whose eigenvectors are close to the lines along the embedding vector of dress and the embedding vector of phone respectively. Hence, the function

take its max value close to the direction of dress, where Ur(0) means the unit ball in R(n). When we using this model to predict, we will recommend dress to the user as the top 1 selection.

The Network structure of our new method is showed in Figure 4. The main difference between Figure 4 and Figure 2 is that

For using as match method, we give two index method of matrix embedding method.

We formulate the problem as following:

There a lot of vector {xi}i⊂R(n), for a symmetrical matrix A∈Mn(R), how we can find the top N xis such that xTAx is maximal.

Because A is a symmetrical matrix, we have

where ki,j={1 if i=j2 otherwise, and Γ1(A):=(ai,j)i≤j, Γ2(x):=(ki,jxixj)i≤j. Therefore, we can map the user session matrix embedding A into a linear space of dimension Rn(n+1)2 using Γ1, and map the item vector embedding x into the same linear space using Γ2, the score xTAx is equal to the inner product of Γ1(A) and Γ2(x). Hence, we can construct the index of Γ2(x) for the vector embedding x for all items in offline and get Top N items of maximal inner product for every Γ1(A) in online like usual method to get Top N items of maximal inner product.

The Flatten method need build index for vectors of dimension n(n+1)2. When the dimension n

As a approximate method, we take a small positive integral number k, and take the top N items of maximal inner product <αi,x> for i=1,2,⋯,k, and hence we have kN items, then we take top N items from these kN items by computing xTAx.

We give the experiment to compare matrix embedding method and vector embedding method on the Dataset RSC15 (RecSys Challenge 2015 111 http://2015.recsyschallenge.com/) and the last.fm last_fm dataset .

For the RSC15 dataset, after tuning the hyperparameters on the validation set, we retrained the three models above on the whole days among six months, and used the last single day to evaluate those models. When it comes to the last.fm playlists dataset, since the playlists have no timestamps, we followed the preprocessing procedure of

last_fm_paper , that is, randomly assigned each playlist to one of the 31 buckets (days), and used the lastest single day to evaluate.

We compare the tree models:

in Tensorflow framework, including the whole GRU4REC architecture, the training procedure as well as the evaluation procedure.

GRU4REC with symmetric matrix To address the problem of GRU4REC demonstrated in section 1, we replace the output of the GRU i.e. the embedding vector of the current session with a symmetric matrix. More specifically…

In order to evaluate the performance of the three models described in section 2.1, we constrained the total quantity of their parameters to the same range. The detail of the networks’ architecture are shown in table 1 respectively.

Table 2 shows the results when testing those three models on the last day of the ACM RecSys 2015 Challenge dataset for 10 epochs. After tuning on the validation set, we set lr=0.002, batch size = 256 for all the experiments. And since the GRU4REC and GRU4REC with FC layer model have less hidden units, dropout=0.8 shows better performance for them while dropout=0.5 performs better for the symmetric matrix model. Meanwhile, they’re using bpr loss and adam optimizer in all cases.

We additionally include the results in SESSION_BASED which uses 1000 hidden units for the GRU4REC model. It’s obvious that by combining symmetric matrix embedding method with GRU4REC, we could use less parameter to achive better recall@20 and mrr@20 performance.

For the last.fm music playlists datasets, we applied the same network structure for each model as mentioned above, the specific parameters are shown in Table 3 as follows.

Since the music playlists dataset is so different from the e-commerce click sequence dataset, after tuning on the validation set, we finally set lr = 0.0012 for all cases while the batch size and dropout configuration remain the same.

Table 4 shows results for the last.fm music playlists datasets. We can notice the same trend when comparing the results with the RecSys15 dataset.