Mathematical and numerical analysis of a nonlocal Drude model in nanoplasmonics

In this paper, we consider the frequency-domain Maxwell's equations coupled to a nonlocal Drude model which describes the nonlocal optical response in metallic nanostructures. We prove the existence and uniqueness of weak solutions to the coupled equations. A Galerkin finite element method based on the Raviart--Thomas and Nédélec elements is proposed to solve the equations and the associated error estimates are given. This is the first work on the mathematical and numerical analysis of this model. Numerical examples are presented to verify our theoretical analysis. 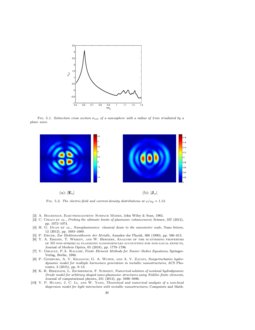 Nanoplasmonics is an active research field concerned with the study of optical properties of metallic nanostructures [4, 20]. The interaction of metallic nanostrucutes with light at optical frequencies produces the excitation of (localized) surface plasmons, i.e., the collective oscillation of conduction band electrons at the metal surface, leading to many unusual and fascinating properties. It enables the confinement of light at the nanoscale vicinity of metal surfaces, the enormous local fields enhancement of the incident wave, and the squeezing of light beyond the diffraction limit, providing unparalleled means for manipulation of light at the nanoscale. As a result, nanoplasmonics has found applications in different fields, such as near-field scanning microscopy [12], ultrasensitive sensing and detection [21], and plasmonic waveguilding [16]. To be able to understand and make use of nanoplasmonic phenomena, an appropriate modeling for describing the optical response of metallic nanostructures is required.

Historically, the interaction of light with metals has been described by the classical theory of light-matter interaction in which light and matter (the free electrons) are described by Maxwell’s equations and Newtonian mechanics, respectively. The most widely used model to describe the optical response of metals is Drude’s model [5]. In this model, the collective oscillation of conduction electrons in metals subject to driving optical fields is analysed within the framework of local-response approximation (LRA), where the material response occurs only in the point of space of the perturbation and there is no response at even short distances. Drude’s model has achieved a great success in the modeling of bulk metals. However, as the size of metallic structures shrinks down to nanometer scales, nonlocal interaction effects between electrons become predominant and Drude’s model is inadequate to explain experimentally observable phenomena.

Due to a relatively simple form and the successful interpretation of observable nonlocal effects [3], the NHD model has drew much attention in recent years and become a popular model in the study of optical properties of metallic nanostructures. Meanwhile, numerical methods for solving Maxwell’s equations coupled to the NHD model have been extensively studied. In [9], the frequency-domain NHD model (frequency-domain Maxwell’s equations coupled to the NHD model) is solved for modeling nano-plasmonic structures with complex geometries by using the Nédélec elements based finite element method. In [25]

In this paper, we present a rigorous mathematical and numerical analysis of the frequency-domain NHD model for the first time. The existence and uniqueness of weak solutions to the equations are proved. A finite element method based on the Raviart–Thomas and Nédélec elements is developed for the equations and the convergence is proved. There are two aspects of this model that make the analysis challenging. First, the curl and div operators both have a large null space in the continuous and discrete levels, which must be removed from the function spaces by using the (discrete) Hemtholtz decompositions. To this end, an understanding of some properties of the continuous function spaces and the finite element spaces is required. Second, the bilinear forms in the weak formulation of the equations are not coercive, which brings difficulty to the analysis in both continuous and discrete levels. To overcome this problem, in the proof of the well-posedness, we first show the uniqueness of weak solutions and then apply the Fredholm alternative to prove the existence of weak solutions, while in the proof of the convergence of the finite element discretization, the theory of convergence of collectively compact operators developed in [13, 14] is used. Although our methods are somewhat similar to those used in [14] for the analysis of frequency-domain Maxwell’s equations, the proof presented in this paper is much more delicate due to the coupled system nature.

The rest of this paper is organized as follows. In section 2, we give a brief derivation of the NHD model and describe the problem considered in this paper. In section 3, we prove the existence and uniqueness of weak solutions to the equations. In section 4, we propose a finite element discretization for the equations and prove the convergence of the scheme. In section 5, we give some numerical examples to confirm our theoretical analysis.

In this section, we briefly introduce the NHD model and give the problem considered in this paper.

In the absence of external charge and current, macroscopic Maxwell’s equations for metals can be written as

The equations link four macroscopic fields E (the electric field), H (the magnetic field), D (the dielectric displacement), and B (the magnetic flux density) with the free charge and current densities ρ and J. Maxwell’s equations (1) are supplemented by the constitutive laws which link B to H and D to E via

We derive the NHD model starting from the hydrodynamic model within which the free electrons are modeled as a charged fluid with the Euler equations:

where e is the electron charge, me is the effective electron mass, n is the electron density, v is the hydrodynamic velocity, p is the electron pressure, and γ>0 is the damping constant. The term −e(E+v×B) represents the Lorentz force. The polarization charge and current densities ρ and J of the free electrons are given as

The equations (1)-(4) form the self-consistent Euler–Maxwell coupled equations. In order to simplify the above equations, we linearize the equations (3) as in perturbation theory by expanding the physical fields in a non-oscillating term (e.g. the constant equilibrium electron density n0) and a small first-order dynamic term. In this spirit, we can write the perturbation expansions for n(x,t) and v(x,t)

Similar expansions can be written for the electric and magnetic fields. Since in the absence of an external field v=v0=0, the nonlinear terms v⋅∇v and v×B vanish due to the linearization. By using the Thomas-Fermi model for the pressure term in (3), we can linearize it as

where β is an important parameter representing the nonlocality related to the Fermi velocity [2]. Using the assumptions above, we get the linearized hydrodynamic equation

and the linearized continuity equation

Differentiating (7) with respect to time t, inserting the linearized current density J≈−en0v and using (8), we obtain

) by Fourier transformation in the time domain, where

i is the imaginary unit and ω is the angular frequency, and eliminating the magnetic field H, we get Maxwell’s equations with the NHD model in frequency domain

By Fourier transformation in the space domain, we replace ∇ with −ik in the second equation of (11), which gives

The parameter β represents the level of nonlocality. As β→0, we recover the classical Drude permittivity ϵ(ω)=ϵ∞−ω2p/(ω(ω+iγ)).

In this paper we consider the following equations

with the boundary conditions

Here Ω and Ωs are the bounded, simply-connected, Lipschitz polyhedron domains in R3 with ¯Ωs⊂Ω. Ω and Ωs are shown in Fig 2.1. The magnetic permeability μ and electric permittivity ε are two piecewise constant functions in the domain Ω, namely

and μi,εi(i=1,2) are positive constants.

where Einc and Hinc represent the electromagnetic fields of the incoming light. By substituting H=1iωμ∇×E into (17) and denoting iω(Hinc−n×Einc)×n by g, we get the boundary conditions (15) for the electric field E.

3 Existence and uniqueness of the solutions

In this section, we study the well-posedness of the problem (14)-(15). To begin with, we introduce some notations. We denote H1(Ω) as the conventional Sobolev spaces of complex-valued functions defined in Ω and H10(Ω) as the subspace of H1(Ω) consisting of functions whose traces are zero on ∂Ω. Let Lp(Ω) and Lp(Ω)=[Lp(Ω)]3

which are equipped with the norms

Functions in HT(curl;Ω) are equipped with the norm

For the sake of convenience, we denote by

is the characteristic function of

We now state the main result of this section. Let Ω and Ωs be the bounded, simply-connected, Lipschitz polyhedron domains in R3 with ¯Ωs⊂Ω. The equations (22) exist a unique solution (E,J)∈X(Ω)×Y(Ωs) satisfying

Next by setting v=J in the second equation of (22) and taking the imaginary part of the equation, we have

Thus we find that E satisfies

Before proving the existence of solutions of (22), we give two useful lemmas. We have the following Helmholtz decompositions for X(Ω) and Y(Ωs)

The compact embedding of X0(Ω) was proved in Theorem 4.7 of [14] and the compactness property of Y0(Ωs) can be proved by a similar trick.

We now define the sesquilinear form a+ by

It is not difficult to prove the following lemma. There exists a constant α>0 depending on μ1, ε1, μ2, ε2, γ, β, ω and ωp such that

We have the following result. The operator K is a bounded and compact map from L2(Ω)×L2(Ωs) into L2(Ω)×L2(Ωs). Moreover,

By using the classical theory of variational problems [14], we see that the mixed problem (43) exists a unique solution (A,q). In addition,

By using the Lax–Milgram theorem again, we see that ^F is well defined and

Since K is compact, by applying the Fredholm alternative theorem and Lemma 3, we see that (52) exists a unique solution ^Z with the following estimate

If ε is constant on the whole domain Ω, selecting u=∇ξ with ξ∈H10(Ω) in the first equation of (22) and applying a similar argument, we find

Let Th be a quasiuniform triangulation of Ω into tetrahedrons of maximal diameter h which matches with the interface ∂Ωs, i.e., both triangulations for Ωs and Ω/Ωs are combined into a standard triangulation of the whole domain Ω. For convenience, we denote by Th,s the restriction of Th in the domain Ωs. Let Pr be the spaces of polynomials of maximal total degree r and ˜Pr be the spaces of homogeneous polynomials of total degree exactly r. We define the finite element space of H10(Ω)