The relationship between democracy and economic growth is of long-standing interest. We revisit the panel data analysis of this relationship by Acemoglu, Naidu, Restrepo and Robinson (forthcoming) using state of the art econometric methods. We argue that this and lots of other panel data settings in economics are in fact high-dimensional, resulting in principal estimators -- the fixed effects (FE) and Arellano-Bond (AB) estimators -- to be biased to the degree that invalidates statistical inference. We can however remove these biases by using simple analytical and sample-splitting methods, and thereby restore valid statistical inference. We find that the debiased FE and AB estimators produce substantially higher estimates of the long-run effect of democracy on growth, providing even stronger support for the key hypothesis in Acemoglu, Naidu, Restrepo and Robinson (forthcoming). Given the ubiquitous nature of panel data, we conclude that the use of debiased panel data estimators should substantially improve the quality of empirical inference in economics. 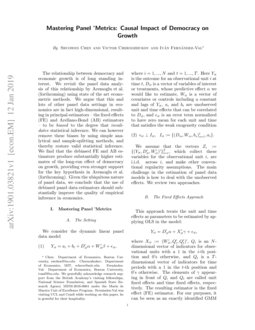 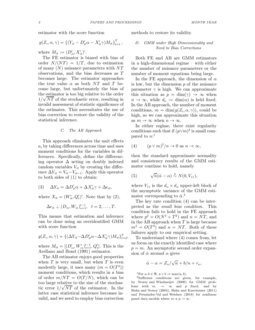 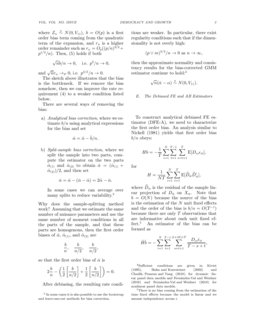 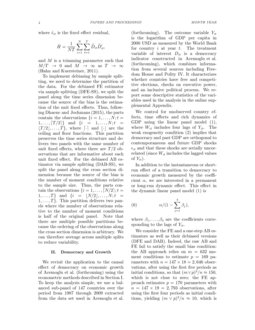 is a vector of variables of interest or treatments, whose predictive effect

α we would like to estimate, Wit is a vector of covariates or controls including a constant and lags of Yit, ai and bt are unobserved unit and time effects that can be correlated to Dit, and ϵit is an error term normalized to have zero mean for each unit and time that satisfies the weak exogeneity condition

We assume that the vectors Zi:={(Yit,D′it,W′it)′}Tt=1, which collect these variables for the observational unit i, are i.i.d. across i, and make other conventional regularity assumptions. The main challenge in the estimation of panel data models is how to deal with the unobserved effects. We review two approaches.

This approach treats the unit and time effects as parameters to be estimated by applying OLS in the model:

where Xit:=(W′it,Q′i,Q′t)′, Qi is an N-dimensional vector of indicators for observational units with a 1 in the i-th position and 0’s otherwise, and Qt is a T-dimensional vector of indicators for time periods with a 1 in the t-th position and 0’s otherwise. The elements of γ appearing in front of Qi and Qt are called unit fixed effects and time fixed effects, respectively. The resulting estimator is the fixed effect (FE) estimator. For our purposes, it can be seen as an exactly identified GMM estimator with the score function

The FE estimator is biased with bias of order N/(NT)=1/T, due to estimation of many (N) nuisance parameters with NT observations, and the bias decreases as T becomes large. The estimator approaches the true value α as both NT and T become large, but unfortunately the bias of the estimator is too big relative to the order 1/√NT of the stochastic error, resulting in invalid assessment of statistic significance of the estimates. This necessitates the use of bias correction to restore the validity of the statistical inference.

by taking differences across time and uses moment conditions for the variables in differences. Specifically, define the differencing operator

Vit by creating the difference ΔVit=Vit−Vit−1. Apply this operator to both sides of (1) to obtain:

The AB estimator enjoys good properties when T is very small, but when T is even modestly large, it uses many (m=O(T2)) moment conditions, which results in a bias of order m/NT=O(T/N), which can be too large relative to the size of the stochastic error 1/√NT of the estimator. In the latter case statistical inference becomes invalid, and we need to employ bias correction methods to restore its validity.

1.4 GMM under High Dimensionality and Need to Bias Corrections

Both FE and AB are GMM estimators in a high-dimensional regime – with either the number of nuisance parameters or the number of moment equations being large.

In the FE approach, the dimension of α is low, but the dimension p of the nuisance parameter γ is high. We can approximate this situation as p=dim(γ)→∞ when n→∞, while dα:=dim(α) is held fixed. In the AB approach, the number of moment conditions, m=dim(g(Zi,α,γ)), could be high, so we can approximate this situation as m→∞ when n→∞.

then the standard approximate normality and consistency results of the GMM estimator continue to hold, namely

The key rate condition (4) can be interpreted as the small bias condition. This condition fails to hold in the FE approach where p2=O(N2+T2) and n=NT, and in the AB approach when T is large because m2=O(T4) and n=NT. Both of these failures apply to our empirical setting.

To understand where (4) comes from, let us focus on the exactly identified case where p=m. An asymptotic second order expansion of ^α around α gives

The sketch above illustrates that the bias is the bottleneck. If we remove the bias somehow, then we can improve the rate requirement (4) to a weaker condition listed below.

There are several ways of removing the bias:

so that the first order bias of ˇα is

After debiasing, the resulting rate conditions are weaker. In particular, there exist regularity conditions such that if the dimensionality is not overly high:

then the approximate normality and consistency results for the bias-corrected GMM estimator continue to hold:444Sufficient conditions are given in Kiviet (1995), Hahn and Kuersteiner (2002) and Chudik, Pesaran and Yang (2018) for dynamic linear panel data models and Fernández-Val and Weidner (2016) and Fernández-Val and Weidner (2018) for nonlinear panel data models.

1.5 The Debiased FE and AB Estimators

where ^ϵit is the fixed effect residual,

, which combines information from several sources including Freedom House and Polity IV. It characterizes whether countries have free and competitive elections, checks on executive power, and an inclusive political process. We report some descriptive statistics of the variables used in the analysis in the online supplemental Appendix.

We control for unobserved country effects, time effects and rich dynamics of GDP using the linear panel model (1), where Wit includes four lags of Yit. The weak exogeneity condition (2) implies that democracy and past GDP are orthogonal to contemporaneous and future GDP shocks ϵit and that these shocks are serially uncorrelated (since Wit includes the lagged values of Yit).

In addition to the instantaneous or short-run effect of a transition to democracy to economic growth measured by the coefficient α, we are interested in a permanent or long-run dynamic effect. This effect in the dynamic linear panel model (1) is

where β1,…,β4 are the coefficients corresponding to the lags of Yit.

To debias the estimators, we consider both analytical and split sample bias corrections. For the fixed effect approach, DFE-A implements the analytical debiasing with M=4, whereas DFE-SS implements debiasing by sample splitting. We consider two versions of the debiasing via sample-splitting for AB, where DAB-SS1 uses one random split and DAB-SS5 uses the average of five random splits.

Table 1 presents the empirical results.666We obtained the estimates with the commands plm and pgmm of the package plm in R. FE finds that a transition to democracy increases economic growth by almost 1.9% in the first year and 16% in the long run, while AB finds larger impacts of 4% and 21% but less precisely estimated. We find that the debiasing changes the estimates by a significant amount in both statistical sense (relative to the standard error) and economic sense (relative to the uncorrected estimates). The debiased estimators, DFE and DAB, find that a transition to democracy increases economic growth by about 2.3-5.2% in the first year, and about 25-26% in the long run. Interestingly, the two debiased approaches produce very similar estimates. Moreover, the results coincide with the results obtained using the method of Hahn, Hausman and Kuersteiner (2005), as reported in Acemoglu et al. (forthcoming). We believe that the estimates reported here as well as the later estimates reported in Acemoglu et al. (forthcoming) represent an adequate, state of the art analysis. Of course, it would be interesting to continue to explore other modern, perhaps even more refined, econometric approaches to thoroughly examine the empirical question.

The online supplemental Appendix contains the data, descriptive statistics, and code in R and Stata for the empirical application.