Gaussian process regression is a popular method for non-parametric probabilistic modeling of functions. The Gaussian process prior is characterized by so-called hyperparameters, which often have a large influence on the posterior model and can be difficult to tune. This work provides a method for numerical marginalization of the hyperparameters, relying on the rigorous framework of sequential Monte Carlo. Our method is well suited for online problems, and we demonstrate its ability to handle real-world problems with several dimensions and compare it to other marginalization methods. We also conclude that our proposed method is a competitive alternative to the commonly used point estimates maximizing the likelihood, both in terms of computational load and its ability to handle multimodal posteriors. 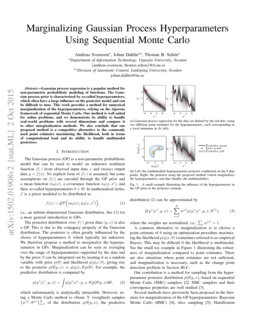 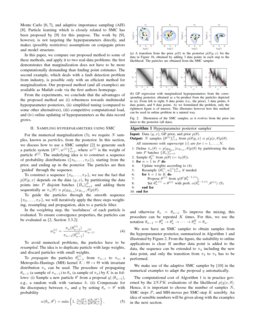 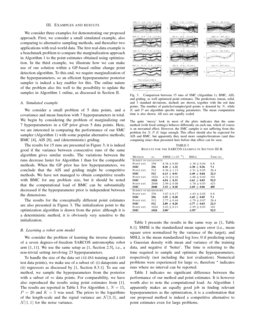 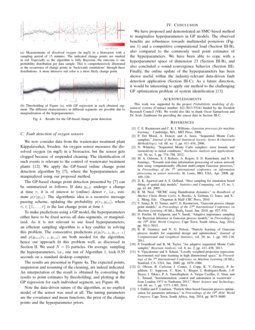 Prediction of aftershocks with GPR

This paper focusses on the formulation of numerical integration as an in...
Toni Karvonen, et al. ∙

The Gaussian process (GP) is a non-parametric probabilistic model that can be used to model an unknown nonlinear function f(⋅) from observed input data x and (noisy) output data y=f(x). No explicit form of f(⋅) is assumed, but some assumptions on f(⋅) are encoded through the GP prior and a mean function mθ(x), a covariance function κθ(x,x′), and their so-called hyperparameters θ∈Θ. In mathematical terms, f is a priori modeled to be distributed as

[1] for a more general introduction to GPs.

p(θ) and likelihood p(y|x,θ), giving rise to the posterior p(θ|y,x)∝p(y|x,θ)p(θ). For example, the predictive distribution is computed by

which unfortunately is analytically intractable. However, using a Monte Carlo method to obtain N (weighted) samples {w(i),θ(i)}Ni=1 of the distribution p(θ|y,x), the predictive distribution (2) can be approximated by

Our contribution is a method for sampling from the hyperparameter posterior distribution p(θ|y,x), based on sequential Monte Carlo (SMC) samplers [2]. SMC samplers and their convergence properties are well studied [3].

Several methods have previously been proposed in the literature for marginalization of the GP hyperparameters: Bayesian Monte Carlo (BMC) [4], slice sampling [5], Hamiltonian Monte Carlo [6, 7], and adaptive importance sampling (AIS) [8]. Particle learning which is closely related to SMC has been proposed by [9] for this purpose. The work by [9]

, however, is not targeting the hyperparameters directly, and makes (possibly restrictive) assumptions on conjugate priors and model structure.

In this paper, we compare our proposed method to some of these methods, and apply it to two real-data problems: the first demonstrates that marginalization does not have to be more computationally demanding than finding point estimates. The second example, which deals with a fault detection problem from industry, is possible only with an efficient method for marginalization. Our proposed method (and all examples) are available as Matlab code via the first authors homepage.

From the experiments, we conclude that the advantages of the proposed method are (i) robustness towards multimodal hyperparameter posteriors, (ii) simplified tuning (compared to some other alternatives), (iii) competitive computational load, and (iv) online updating of hyperparameters as the data record grows.

For the numerical marginalization (3), we require N samples, known as particles, from the posterior. In this section, we discuss how to use a SMC sampler [2] to generate such a particle system {θ(i),w(i)}Ni=1, where w(i) is the weight of particle θ(i)

. The underlying idea is to construct a sequence of probability distributions (

{π0,…,πP}), starting from the prior, and ending up in the posterior. The particles are then ‘guided’ through the sequence.

To guide the particles through the smooth sequence {π0,…,πP}, we will iteratively apply the three steps weighting, resampling and propagation, akin to a particle filter.

In the weighting step, the ‘usefulness’ of each particle is evaluated. To ensure convergence properties, the particles can be evaluated as [2, Section 3.3.2]

To avoid numerical problems, the particles have to be resampled. The idea is to duplicate particle with large weights, and discard particles with small weights.

To propagate the particles θ(i)n−1 from πn−1 to πn, a Metropolis-Hastings (MH) kernel K:Θ↦Θ with invariant distribution πn can be used. The procedure of propagating θn−1 (a sample of πn−1) to θn (a sample of πn) by K is as follows: (i) Sample a new particle θ′ from a proposal q(⋅|θn−1)

, e.g., a random walk with variance

h. (ii) Compensate for the discrepancy between πn and q by setting θn=θ′ with probability

and otherwise θn=θn−1. To improve the mixing, this procedure can be repeated K times. For this, we use the notation θn−1=θ0n→θ1n→⋯→θKn=θn.

We now have an SMC sampler to obtain samples from the hyperparameter posterior, summarized in Algorithm 1 and illustrated by Figure 6. From the figure, the suitability to online applications is clear: If another data point is added to the data, the sequence can be extended to π4 including the new data point, and only the transition from π3 to π4 has to be performed.

We make use of the adaptive SMC sampler by [10] in the numerical examples to adapt the proposal q automatically.

The computational cost of Algorithm 1 is in practice governed by the 2NPK evaluations of the likelihood p(y|x,θ). Hence, it is important to choose the number of samples N, SMC steps P, and MH-moves per SMC-step K sensibly. An idea of sensible numbers will be given along with the examples in the next section.

We consider three examples for demonstrating our proposed approach. First, we consider a small simulated example, also comparing to alternative sampling methods, and thereafter two applications with real-world data. The first real-data example is a benchmark problem to compare the marginalization approach in Algorithm 1 to the point estimates obtained using optimization. In the third example, we illustrate how we can make use of our solution within a GP-based online change point detection algorithm. To this end, we require marginalization of the hyperparameters, so an efficient hyperparameter posterior sampler is indeed a key enabler for this. The online nature of the problem also fits well to the possibility to update the samples in Algorithm 1 online, as discussed in Section II.

We consider a small problem of 5 data points, and a covariance and mean function with 7 hyperparameters in total. We begin by considering the problem of marginalizing out 7 hyperparameters in a GP prior given 5 data points. Here, we are interested in comparing the performance of our SMC sampler (Algorithm 1) with some popular alternative methods; BMC [4], AIS [8], and (deterministic) griding.

The results for 15 runs are presented in Figure 7; it is indeed good if the variance between consecutive runs of the same algorithm gives similar results. The variations between the runs decrease faster for Algorithm 1 than for the comparable methods. When the GP prior has few hyperparameters, we conclude that the AIS and griding might be competitive methods. We have not managed to obtain competitive results with BMC for any problem size, but it should be noted that the computational load of BMC can be substantially decreased if the hyperparameter prior is independent between the dimensions.

The results for the conceptually different point estimates are also presented in Figure 7. The initialization point to the optimization algorithm is drawn from the prior: although it is a deterministic method, it is obviously very sensitive to the initialization.

To handle the size of the data set (44484 training and 4449 test data points), we make use of a subset of: (i) datapoints and (ii) regressors as discussed by [1, Section 8.3.1]. To use our method, we sample the hyperparameters from the posterior with a subset of m data points. For comparability, we have also reproduced the results using point estimates from [1]. The results are reported in Table I. For Algorithm 1, N=15, P=20 and K=5 was used. The priors to the logarithms of the length-scale and the signal variance are N(3,3), and N(1,1) for the noise variance.

Table I presents the results in the same way as [1, Table 8.1]. SMSE is the standardized mean square error (i.e., mean square error normalized by the variance of the target), and MSLL is the mean standardized log loss; 0 if predicting using a Gaussian density with mean and variance of the training data, and negative if ‘better’. The time is referring to the time required to sample and optimize the hyperparameters, respectively (not including the test evaluation). Numerical problems were experienced for large m, therefore ⋆ indicates runs where no interval can be reported.

Table I indicates no significant difference between the performance of our method and point estimates. It is however worth also to note the computational load: As Algorithm 1 apparently makes an equally good job in finding relevant hyperparameters as the optimization, it is a confirmation that our proposed method is indeed a competitive alternative to point estimates even for large problems.

We now consider data from the wastewater treatment plant Käppalaverket, Sweden. An oxygen sensor measures the dissolved oxygen (in mg/l) in a bioreactor, but the sensor gets clogged because of suspended cleaning. The identification of such events is relevant to the control of wastewater treatment plants [12]. We apply the GP-based online change point detection algorithm by [7], where the hyperparameters are marginalized using our proposed method.

The GP-based change point detection presented by [7] can be summarized as follows: If data y1:T undergo a change at time r, it is of interest to (online) detect r, i.e., estimate p(r|y1:t). The algorithmic idea is a recursive message passing scheme, updating the probability p(rt,y1:t), where rt∈{1,…,t} is the last change point at time t.

To make predictions using a GP model, the hyperparameters either have to be fixed across all data segments, or marginalized. As it is not relevant to use fixed hyperparameters, an efficient sampling algorithm is a key enabler in solving this problem. The consecutive predictions p(yt|rt−1,yrt:t−1) and p(yt+1|rt−1,yrt:t) are both needed for the algorithm, hence our approach fit this problem well, as discussed in Section II. We used N=25 particles. On average, sampling the hyperparameters, i.e., one run of Algorithm 1, took 0.55 seconds on a standard desktop computer.

The results are presented in Figure (a)a. The expected points, suspension and resuming of the cleaning, are indeed indicated. An interpretation of the result is obtained by converting the results to point estimates by thresholding, and plotting at the GP regression for each individual segment, see Figure (b)b.

Note the data-driven nature of the algorithm, as no explicit model of the sensor was used at all. The tuning parameters are the covariance and mean functions, the prior of the change points and the hyperparameter priors.

This work was supported by the project Probabilistic modeling of dynamical systems (Contract number: 621-2013-5524) funded by the Swedish Research Council (VR). We would also like to thank Oscar Samuelsson and Dr. Jesús Zambrano for providing the sensor data in Section III-C.