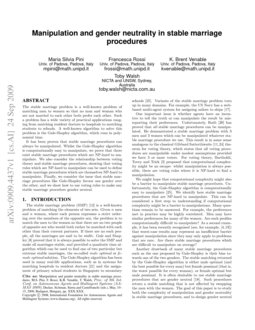 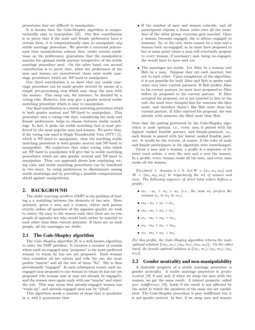 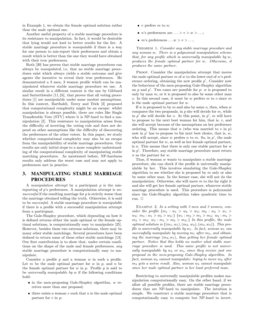 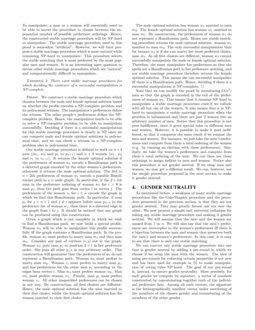 The stable marriage problem (SMP) sm-book is a well-known problem of matching the elements of two sets. Given n men and n women, where each person expresses a strict ordering over the members of the opposite sex, the problem is to match the men to the women so that there are no two people of opposite sex who would both rather be matched with each other than their current partners. If there are no such people, all the marriages are said to be stable. Gale and Shapley gs proved that it is always possible to solve the SMP and make all marriages stable, and provided a quadratic time algorithm which can be used to find one of two particular but extreme stable marriages, the so-called male optimal or female optimal solution. The Gale-Shapley algorithm has been used in many real-life applications, such as in systems for matching hospitals to resident doctors roth-H and the assignment of primary school students in Singapore to secondary schools revisited. Variants of the stable marriage problem turn up in many domains. For example, the US Navy has a web-based multi-agent system for assigning sailors to ships liebowitz.

One important issue is whether agents have an incentive to tell the truth or can manipulate the result by mis-reporting their preferences. Unfortunately, Roth roth-manip has proved that all stable marriage procedures can be manipulated. He demonstrated a stable marriage problem with 3 men and 3 women which can be manipulated whatever stable marriage procedure we use. This result is in some sense analogous to the classical Gibbard Satterthwaite gibbard; gibbard2 theorem for voting theory, which states that all voting procedures are manipulable under modest assumptions provided we have 3 or more voters. For voting theory, Bartholdi, Tovey and Trick bartholdi proposed that computational complexity might be an escape: whilst manipulation is always possible, there are voting rules where it is NP-hard to find a manipulation.

Our third contribution is to show that any stable marriage procedure can be made gender neutral by means of a simple pre-processing step which may swap the men with the women. This swap can, for instance, be decided by a voting rule. However, this may give a gender neutral stable matching procedure which is easy to manipulate.

The stable marriage problem (SMP) is the problem of finding a a matching between the elements of two sets. More precisely, given n men and n women, where each person strictly orders all members of the opposite gender, we wish to marry the men to the women such that there are no two people of opposite sex who would both rather be married to each other than their current partners. If there are no such people, all the marriages are stable.

The Gale-Shapley algorithm gs is a well-known algorithm to solve the SMP problem. It involves a number of rounds where each un-engaged man “proposes" to his most-preferred woman to whom he has not yet proposed. Each woman then considers all her suitors and tells the one she most prefers “maybe" and all the rest of them “No". She is then provisionally “engaged". In each subsequent round, each un-engaged man proposes to one woman to whom he has not yet proposed (the woman may or may not already be engaged), and the women once again reply with one “maybe" and reject the rest. This may mean that already-engaged women can “trade up", and already-engaged men can be “jilted".

This algorithm needs a number of steps that is quadratic in n, and it guarantees that:

Note that the pairing generated by the Gale-Shapley algorithm is male optimal, i.e., every man is paired with his highest ranked feasible partner, and female-pessimal, i.e., each female is paired with her lowest ranked feasible partner. It would be the reverse, of course, if the roles of male and female participants in the algorithm were interchanged.

Assume n=3. Let W={w1,w2,w3} and M={m1,m2,m3} be respectively the set of women and men. The following sequence of strict total orders defines a profile:

Another useful property of a stable marriage procedure is its resistance to manipulation. In fact, it would be desirable that lying would not lead to better results for the lier. A stable marriage procedure is manipulable if there is a way for one person to mis-report their preferences and obtain a result which is better than the one they would have obtained with their true preferences.

Roth roth-manip has proven that stable marriage procedures can always be manipulated, i.e, that no stable marriage procedures exist which always yields a stable outcome and give agents the incentive to reveal their true preferences. He demonstrated a 3 men, 3 women profile which can be manipulated whatever stable marriage procedure we use. A similar result in a different context is the one by Gibbard and Satterthwaite gibbard; gibbard2, that proves that all voting procedures handbook-sc are manipulable under some modest assumptions. In this context, Bartholdi, Tovey and Trick bartholdi proposed that computational complexity might be an escape: whilst manipulation is always possible, there are rules like Single Transferable Vote (STV) where it is NP-hard to find a manipulation stvhard. This resistance to manipulation arises from the difficulty of inverting the voting rule and does not depend on other assumptions like the difficulty of discovering the preferences of the other voters. In this paper, we study whether computational complexity may also be an escape from the manipulability of stable marriage procedures. Our results are only initial steps to a more complete understanding of the computational complexity of manipulating stable matching procedures. As mentioned before, NP-hardness results only address the worst case and may not apply to preferences met in practice.

The Gale-Shapley procedure, which depending on how it is defined returns either the male optimal or the female optimal solutions, is computationally easy to manipulate revisited. However, besides these two extreme solutions, there may be many other stable matchings. Several procedures have been defined to return some of these other stable matchings gusfield. Our first contribution is to show that, under certain conditions on the shape of the male and female preferences, any stable marriage procedure is computationally easy to manipulate.

Consider any stable marriage procedure and any woman w. There is a polynomial manipulation scheme that, for any profile which is universally manipulable by w, produces the female optimal partner for w. Otherwise, it produces the same partner.

Consider the manipulation attempt that moves the male optimal partner m of w to the lower end of w’s preference ordering, obtaining the new profile p′. Consider now the behaviour of the men-proposing Gale-Shapley algorithm on p and p′. Two cases are possible for p: w is proposed to only by man m, or it is proposed to also by some other man o. In this second case, it must be w prefers m to o since m is the male optimal partner for w.

If w is proposed to by m and also by some o, then, when w compares the two proposals, in p she will decide for m, while in p′ she will decide for o. At this point, in p′, m will have to propose to the next best woman for him, that is, v, and she will accept because of the assumptions on her preference ordering. This means that n (who was married to v in p) now in p′ has to propose to his next best choice, that is, w, who will accept, since w prefers n to m. So, in p′, the male optimal partner for w, as well as her female optimal partner, is n. This means that there is only one stable partner for w in p′. Therefore, any stable marriage procedure must return n as the partner for w.

Thus, if woman w wants to manipulate a stable marriage procedure, she can check if the profile is universally manipulable by her. This involves simulating the Gale-Shapley algorithm to see whether she is proposed by m only or also by some other man. In the former case, she will not do the manipulation. Otherwise, she will move m to the far right it and she will get her female optimal partner, whatever stable marriage procedure is used. This procedure is polynomial since the Gale-Shapley algorithm takes quadratic time to run. □

In a setting with 3 men and 3 women, consider the profile {m1:w1>w2>w3; m2:w2>w1>w3; m3:w1>w2>w3;} {w1:m2>m1>m3; w2:m1>m2>m3; w3:m1>m2>m3;} In this profile, the male optimal solution is {(m1,w1),(m2, w2),(m3,w3)}. This profile is universally manipulable by w1. In fact, woman w1 can successfully manipulate by moving m1 after m3, and obtaining the marriage (m2,w1), thus getting her female optimal partner. Notice that this holds no matter what stable marriage procedure is used. This same profile is not universally manipulable by w2 or w3, since they receive just one proposal in the men-proposing Gale-Shapley algorithm. In fact, woman w2 cannot manipulate: trying to move m2 after m3 gets a worse result. Also, woman w3 cannot manipulate since her male optimal partner is her least preferred man.

There exist stable marriage procedures for which deciding the existence of a successful manipulation is NP-complete.