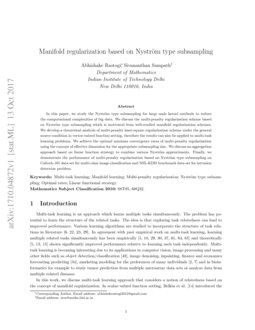 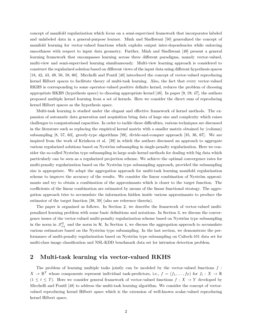 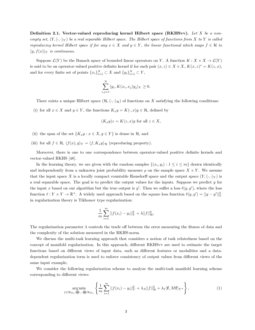 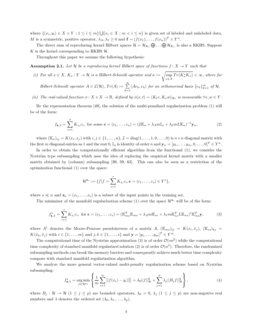 Multi-task learning is an approach which learns multiple tasks simultaneously. The problem has potential to learn the structure of the related tasks. The idea is that exploring task relatedness can lead to improved performance. Various learning algorithms are studied to incorporate the structure of task relations in literature [6, 22, 23, 29]. In agreement with past empirical work on multi-task learning, learning multiple related tasks simultaneously has been empirically [5, 10, 29, 30, 37, 61, 64, 65] and theoretically [5, 13, 15]

shown significantly improved performance relative to learning each task independently. Multi-task learning is becoming interesting due to its applications in computer vision, image processing and many other fields such as object detection/classification

[49], image denoising, inpainting, finance and economics forecasting predicting [34], marketing modeling for the preferences of many individuals [2, 7] and in bioinformatics for example to study tumor prediction from multiple micro array data sets or analyze data from multiple related diseases.

[18, 42, 43, 49, 56, 58, 60]. Micchelli and Pontil [48] introduced the concept of vector-valued reproducing kernel Hilbert spaces to facilitate theory of multi-task learning. Also, the fact that every vector-valued RKHS is corresponding to some operator-valued positive definite kernel, reduces the problem of choosing appropriate RKHS (hypothesis space) to choosing appropriate kernel [48]. In paper [9, 19, 47], the authors proposed multiple kernel learning from a set of kernels. Here we consider the direct sum of reproducing kernel Hilbert spaces as the hypothesis space.

Multi-task learning is studied under the elegant and effective framework of kernel methods. The expansion of automatic data generation and acquisition bring data of huge size and complexity which raises challenges to computational capacities. In order to tackle these difficulties, various techniques are discussed in the literature such as replacing the empirical kernel matrix with a smaller matrix obtained by (column) subsampling [8, 57, 63], greedy-type algorithms [59], divide-and-conquer approach [35, 36, 67]. We are inspired from the work of Kriukova et al. [39]

in which the authors discussed an approach to aggregate various regularized solutions based on Nyström subsampling in single-penalty regularization. Here we consider the so-called Nyström type subsampling in large scale kernel methods for dealing with big data which particularly can be seen as a regularized projection scheme. We achieve the optimal convergence rates for multi-penalty regularization based on the Nyström type subsampling approach, provided the subsampling size is appropriate. We adapt the aggregation approach for multi-task learning manifold regularization scheme to improve the accuracy of the results. We consider the linear combination of Nyström approximants and try to obtain a combination of the approximants which is closer to the target function. The coefficients of the linear combination are estimated by means of the linear functional strategy. The aggregation approach tries to accumulate the information hidden inside various approximants to produce the estimator of the target function

The problem of learning multiple tasks jointly can be modeled by the vector-valued functions f:X→RT whose components represent individual task-predictors, i.e., f=(f1,…,fT) for ft:X→R (1≤t≤T). Here we consider general framework of vector-valued functions f:X→Y developed by Micchelli and Pontil [48] to address the multi-task learning algorithm. We consider the concept of vector-valued reproducing kernel Hilbert space which is the extension of well-known scalar-valued reproducing kernel Hilbert space.

Suppose L(Y) be the Banach space of bounded linear operators on Y. A function K:X×X→L(Y) is said to be an operator-valued positive definite kernel if for each pair (x,z)∈X×X, K(x,z)∗=K(z,x), and for every finite set of points {xi}Ni=1⊂X and {yi}Ni=1⊂Y,

There exists a unique Hilbert space (H,⟨⋅,⋅⟩H) of functions on X satisfying the following conditions:

Moreover, there is one to one correspondence between operator-valued positive definite kernels and vector-valued RKHS [48].

In the learning theory, we are given with the random samples {(xi,yi):1≤i≤m}

drawn identically and independently from a unknown joint probability measure

ρ on the sample space X×Y. We assume that the input space X is a locally compact countable Hausdorff space and the output space (Y,⟨⋅,⋅⟩Y) is a real separable space. The goal is to predict the output values for the inputs. Suppose we predict y for the input x based on our algorithm but the true output is y′. Then we suffer a loss ℓ(y,y′)

, where the loss function

ℓ:Y×Y→R+. A widely used approach based on the square loss function ℓ(y,y′)=||y−y′||2Y in regularization theory is Tikhonov type regularization:

The regularization parameter λ controls the trade off between the error measuring the fitness of data and the complexity of the solution measured in the RKHS-norm.

We discuss the multi-task learning approach that considers a notion of task relatedness based on the concept of manifold regularization. In this approach, different RKHSvv are used to estimate the target functions based on different views of input data, such as different features or modalities and a data-dependent regularization term is used to enforce consistency of output values from different views of the same input example.

The direct sum of reproducing kernel Hilbert spaces H=HK1⨁…⨁HKv is also a RKHS. Suppose K is the kernel corresponding to RKHS H.

Throughout this paper we assume the following hypothesis:

Let H be a reproducing kernel Hilbert space of functions f:X→Y such that

By the representation theorem [49], the solution of the multi-penalized regularization problem (1) will be of the form:

In order to obtain the computationally efficient algorithm from the functional (1), we consider the Nyström type subsampling which uses the idea of replacing the empirical kernel matrix with a smaller matrix obtained by (column) subsampling [39, 59, 63]. This can also be seen as a restriction of the optimization functional (1) over the space:

where s≪n and xs=(x1,…,xs) is a subset of the input points in the training set.

The minimizer of the manifold regularization scheme (1) over the space Hxs will be of the form:

The computational time of the Nyström approximation (3) is of order O(sn2) while the computational time complexity of standard manifold regularized solution (2) is of order O(n3). Therefore, the randomized subsampling methods can break the memory barriers and consequently achieve much better time complexity compare with standard manifold regularization algorithm.

We analyze the more general vector-valued multi-penalty regularization scheme based on Nyström subsampling:

Here we introduce the sampling operator which is useful in the analysis of regularization schemes.

The sampling operator Sx:H→Ym associated with a discrete subset x=(xi)mi=1 is defined by

Then its adjoint is given by

The sampling operator is bounded by κ.

We obtain the following explicit expression of the minimizer of the regularization scheme (4). The proof of the theorem follows the same steps as of Lemma 1 [57].

For the positive choice of λ0, the functional (4) has unique minimizer:

where Pxs is the orthogonal projection operator with range Hxs.

The data-free version of the considered regularization scheme (4) is

where the integral operator LK is a self-adjoint, non-negative, compact operator on the Hilbert space (L2ρX,⟨⋅,⋅⟩L2ρX) of square-integrable functions from X to Y with respect to ρX, defined as

For any probability measure, we can always obtain a solution converging to the prescribed target function but the convergence rates may be arbitrarily slow. This phenomena is known as no free lunch theorem [28]. Therefore, we need some prior assumptions on the probability measure ρ in order to achieve the uniform convergence rates for learning algorithms. Following the notion of Bauer et al. [12], Caponnetto and De Vito [20], we consider the following assumptions on the joint probability measure ρ in terms of the complexity of the target function and a theoretical spectral parameter effective dimension:

It is worthwhile to observe that for the real-valued functions and multi-task learning algorithms, the boundedness of output space Y can be easily ensured. So we can get the error estimates from our analysis without imposing any condition on the conditional probability measure (10).

The smoothness of the target function can be described in terms of the integral operator by the source condition:

where ϕ is operator monotone function on the interval [0,κ2] with the assumption ϕ(0)=0 and ϕ2 is a concave function. Then the condition fH∈Ωϕ,R is usually referred to as general source condition [46].

(Polynomial decay condition) For fixed positive constants α,β and b>1

, we assume that the eigenvalues

tn’s of the integral operator LK follows the polynomial decay:

The effective dimension N(γ) can be estimated from Proposition 3 [20] under the polynomial decay condition as follows,

and without the polynomial decay condition, we have

We define the random variable

In this section, we present the optimal minimax convergence rates for vector-valued multi-penalty regularization based on Nyström type subsampling using the concept of effective dimension over the classes of the probability measures Pϕ and Pϕ,b.

In order to prove the optimal convergence rates, we need the following inequality which is used in the papers [12, 20] and based on the results of Pinelis and Sakhanenko [53].

Let ξ be a random variable on the probability space (Ω,B,P) with values in real separable Hilbert space H. If there exist two constants Q and S satisfying

In particular, the inequality (12) holds if

In the following proposition, we measure the effect of random sampling using noise assumption (10) in terms of the effective dimension N(γ). The quantity describes the probabilistic estimates of the perturbation measure due to random sampling.

To estimate the first expression, we consider the random variable ξ1(z)=(LK+γI)−1/2PxsKx(y−fH(x)) from (Z,ρ) to reproducing kernel Hilbert space H with

On applying Proposition 3.1 we conclude that

The second expression can be estimated easily by considering the random variable ξ2(x)=KxK∗x from (X,ρX) to L(H). The proof can also be found in De Vito et al. [27]. ∎

The following conditions on the sample size and sub-sample size are used to derive the convergence rates of regularized learning algorithms. In particular, we can assume the following inequality for sufficiently large sample with the confidence 1−η:

Following the notion of Rudi et al. [57] and Kriukova et al. [39] on subsampling, we measure the approximation power of the projection method induced by the projection operator Pxs in terms of Δs:=||L1/2K(I−Pxs)||L(H). We make the assumption on Δs as considered in Theorem 2 [39]:

In the following section, we discuss the error analysis of the multi-penalty regularization scheme based on Nyström type subsampling in probabilistic sense. In general, we derive the convergence rates for regularization algorithms in the norm in RKHS and the norm in L2ρX separately. In Theorem 3.1, 3.2, 3.3, we estimate error bounds for multi-penalty regularization based on Nyström type subsampling in ψ-weighted norm which consequently provides the convergence rates of the regularized solution fsz,λ in both ||⋅||H-norm and ||⋅||ρ-norm.