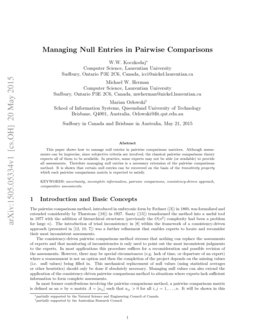 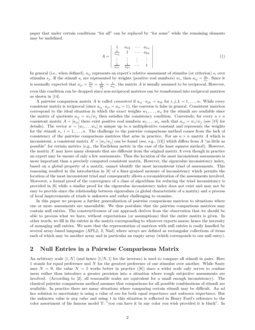 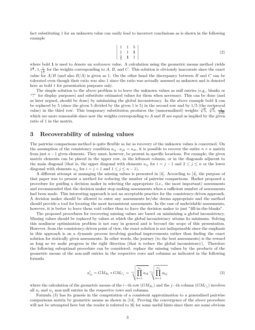 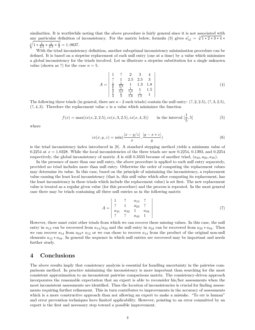 The pairwise comparisons method, introduced in embryonic form by Fechner ([3]) in 1860, was formalized and extended considerably by Thurstone ([16]) in 1927. Saaty ([15]) transformed the method into a useful tool in 1977 with the addition of hierarchical structures (previously the O(n2) complexity had been a problem for large n). The introduction of triad inconsistency in [8] within the framework of a consistency-driven approach (presented in [12, 10, 7]) was a further refinement that enables experts to locate and reconsider their most inconsistent assessments.

The consistency-driven pairwise comparisons method stresses that nothing can replace the assessments of experts and that monitoring of inconsistencies is only used to point out the most inconsistent judgments to the experts. In most applications this procedure suffices for a reconsideration and possible revision of the assessments. However, there may be special circumstances (e.g. lack of time, or departure of an expert) where a reassessment is not an option and then the completion of the project depends on the missing values (i.e. null values) being filled in. This mechanical replacement of null values (using statistical averages or other heuristics) should only be done if absolutely necessary. Managing null values can also extend the application of the consistency-driven pairwise comparisons method to situations where experts lack sufficient information to form complete assessments.

In most former contributions involving the pairwise comparisons method, a pairwise comparisons matrix is defined as an n by n matrix A=[aij] such that aij>0 for all i,j=1,…,n. It will be shown in this paper that under certain conditions “for all” can be replaced by “for some” while the remaining elements may be undefined.

In general (i.e., when defined), aij represents an expert’s relative assessment of stimulus (or criterion) si over stimulus sj. If the stimuli si are represented by weights (positive real numbers) wi, then aij=wiwj. Since it is normally expected that aji=wjwi=1wiwj=1aij, the matrix A is usually assumed to be reciprocal. However, even this condition can be dropped since non-reciprocal matrices can be transformed into reciprocal matrices as shown in [14].

A pairwise comparison matrix A is called consistent if aij⋅ajk=aik for i,j,k=1,…,n. While every consistent matrix is reciprocal (since aij⋅aji=aii=1), the converse is false in general. Consistent matrices correspond to the ideal situation in which the exact weights w1,…,wn for the stimuli are available since the matrix of quotients aij=wi/wj then satisfies the consistency condition. Conversely, for every n×n consistent matrix A=[aij] there exist positive real numbers w1,…wn such that aij=wi/wj (see [15]

for details). The vector

w=[w1,…wn] is unique up to a multiplicative constant and represents the weights for the stimuli si, i=1,…,n. The challenge to the pairwise comparisons method comes from the lack of consistency of the pairwise comparisons matrices that arise in practice. For an n×n matrix A which is inconsistent, a consistent matrix A′=[wi/wj] can be found (see, e.g., [13]) which differs from A “as little as possible” for certain metrics (e.g., the Euclidean metric in the case of the least squares method). However, the matrix A′ may have many elements that are different from the original matrix A

[8] of a finer-grained measure of inconsistency which permits the location of the most inconsistent triad and consequently allows a reconsideration of the assessments involved. Moreover, a formal proof of the convergence of a class of algorithms for reducing the triad inconsistency is provided in [6] while a similar proof for the eigenvalue inconsistency index does not exist and may not be easy to provide since the relationship between eigenvalues (a global characteristic of a matrix) and a process of local improvements of triads is unknown and rather challenging to examine.

In this paper we propose a further generalization of pairwise comparisons matrices to situations where one or more assessments are unavailable. We thus postulate that the pairwise comparisons matrices may contain null entries. The constructiveness of our approach derives from the observation that we should be able to process what we have, without expectations (or assumptions) that the entire matrix is given. In other words, we fill in the entries in the matrix corresponding to whatever experts assess; hence the necessity of managing null entries. We note that the representation of matrices with null entries is easily handled by several array-based languages (APL2, J, Nial) where arrays are defined as rectangular collections of items each of which may be another array and in particular an empty array (which corresponds to our null entry).

An arbitrary scale [1,N] (and hence [1/N,1] for the inverses) is used to compare all stimuli in pairs. Here 1 stands for equal preference and N for the greatest preference of one stimulus over another. While Saaty uses N=9, the value N=5 works better in practice ([8]) since a wider scale only serves to confuse users rather than introduce a greater precision into a situation where rough subjective assessments are involved. (According to [2], all reasonable scales are equivalent for a small enough inconsistency). The classical pairwise comparisons method assumes that comparisons for all possible combinations of stimuli are available. In practice there are many situations where comparing certain stimuli may be difficult. An ad hoc solution to uncertainty is using a value of one for both equal importance and unknown importance. But the unknown value is any value and using 1 in this situation is reflected in Henry Ford’s reference to the color assortment of his famous model T: ”you can have it in any color you wish provided it is black”. In fact substituting 1 for an unknown value can easily lead to incorrect conclusions as is shown in the following example

where bold 1 is used to denote an unknown

513, 1,1513 for the weights corresponding to A, B, and C. This solution is obviously inaccurate since the exact value for A/B (and also B/A) is given as 1. On the other hand the discrepancy between B and C can be tolerated even though their ratio was also 1 since the ratio was actually assessed as unknown and is denoted here as bold 1 for presentation purposes only.

The simple solution to the above problem is to leave the unknown values as null entries (e.g., blanks or “?” for display purposes) and substitute estimated values for them when necessary. This can be done (and as later argued, should be done) by minimizing the global inconsistency. In the above example bold

1 can be replaced by 5 (since the given 5 divided by the given 1 is 5) in the second row and by 1/5 (the reciprocal value) in the third row. This temporary substitution produces the (unnormalized) weights 3√5, 3√5, 13√25 which are more reasonable since now the weights corresponding to A and B are equal as implied by the given ratio of 1 in the matrix.

The pairwise comparisons method is quite flexible as far as recovery of the unknown values is concerned. On the assumption of the consistency condition aij⋅ajk=aik, it is possible to recover the entire n×n matrix from just n−1 given elements. They must, however, be present in specific locations. For example, the given matrix elements can be placed in the upper row, in the leftmost column, or in the diagonals adjacent to the main diagonal (that is, the upper diagonal with elements aij for i=j−1 and 2≤j≤n or the lower diagonal with elements aij for i=j+1 and 1≤j≤n−1).

A different attempt at managing the missing values is presented in [4]. According to [4], the purpose of that paper was to present a method for reducing the number of pairwise comparisons. Harker proposed a procedure for guiding a decision maker in selecting the appropriate (i.e., the most important) assessments and recommended that the decision maker stop making assessments when a sufficient number of assessments had been made. This interesting approach is not an acceptable practice for the consistency-driven approach. A decision maker should be allowed to enter any assessments he/she deems appropriate and the method should provide a tool for locating the most inconsistent assessments. In the case of undecidable assessments, however, it is better to leave them void rather than to force the decision maker to just ”fill-in-the-blanks”.

The proposed procedures for recovering missing values are based on minimizing a global inconsistency. Missing values should be replaced by values at which the global inconsistency attains its minimum. Solving this nonlinear optimization problem is not easy in general and is beyond the scope of this presentation. However, from the consistency-driven point of view, the exact solution is not indispensable since the emphasis in this approach is on a dynamic process involving gradual improvements rather than finding the exact solution for statically given assessments. In other words, the journey (to the best assessments) is the reward as long as we make progress in the right direction (that is reduce the global inconsistency). Therefore the following suboptimal procedure can be considered: replace the missing values by the products of the geometric means of the non-null entries in the respective rows and columns as indicated in the following formula

where the calculation of the geometric means of the i−th row (GMRi) and the j−th column (GMCj) involves all ni and nj non-null entries in the respective rows and columns.

Formula (3) has its genesis in the computation of a consistent approximation to a generalized pairwise comparisons matrix by geometric means as shown in [14]. Proving the convergence of the above procedure will not be attempted here but the reader is referred to [6] for some useful hints since there are some obvious similarities. It is worthwhile noting that the above procedure is fairly general since it is not associated with any particular definition of inconsistency. For the matrix below, formula (3) gives a′12=4√1∗2∗3∗4∗4√1∗12.5∗12.5∗13=1.0637.

With the triad inconsistency definition, another suboptimal inconsistency minimization procedure can be defined. It is based on a stepwise replacement of each null entry (one at a time) by a value which minimizes a global inconsistency for the triads involved. Let us illustrate a stepwise substitution for a single unknown value (shown as ?) for the case n=5.

The above results imply that consistency analysis is essential for handling uncertainty in the pairwise comparisons method. In practice minimizing the inconsistency is more important than searching for the most consistent approximation to an inconsistent pairwise comparisons matrix. The consistency-driven approach incorporates the reasonable expectation that an expert is able to reconsider his/her assessments when the most inconsistent assessments are identified. Thus the location of inconsistencies is crucial for finding assessments requiring further refinement. This in turn contributes to improvements in the accuracy of assessments which is a more constructive approach than not allowing an expert to make a mistake. “To err is human” and error prevention techniques have limited applicability. However, pointing to an error committed by an expert is the first and necessary step toward a possible improvement.

The dynamic process of consistency analysis is facilitated by software, which locates and displays the most inconsistent assessments (as implemented in The Concluder system which has been released to the public domain and is available at URL http://www.laurentian.ca/www/math/wkocz/ref.html).