Stochastic gradient descent (SGD) is one of the most widely used algorithms for large scale optimization problems. While classical theoretical analysis of SGD for convex problems studies (suffix) averages of iterates and obtains information theoretically optimal bounds on suboptimality, the last point of SGD is, by far, the most preferred choice in practice. The best known results for last point of SGD shamir2013stochastic however, are suboptimal compared to information theoretic lower bounds by a T factor, where T is the number of iterations. harvey2018tight shows that in fact, this additional T factor is tight for standard step size sequences of 1/√(t) and 1/t for non-strongly convex and strongly convex settings, respectively. Similarly, even for subgradient descent (GD) when applied to non-smooth, convex functions, the best known step-size sequences still lead to O( T)-suboptimal convergence rates (on the final iterate). The main contribution of this work is to design new step size sequences that enjoy information theoretically optimal bounds on the suboptimality of last point of SGD as well as GD. We achieve this by designing a modification scheme, that converts one sequence of step sizes to another so that the last point of SGD/GD with modified sequence has the same suboptimality guarantees as the average of SGD/GD with original sequence. We also show that our result holds with high-probability. We validate our results through simulations which demonstrate that the new step size sequence indeed improves the final iterate significantly compared to the standard step size sequences. 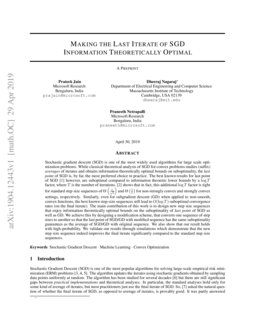 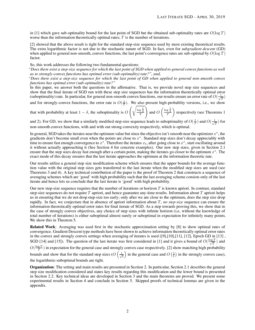 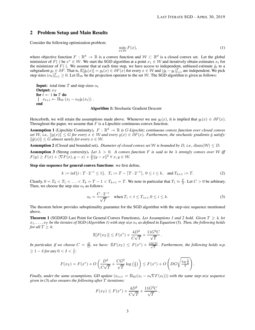 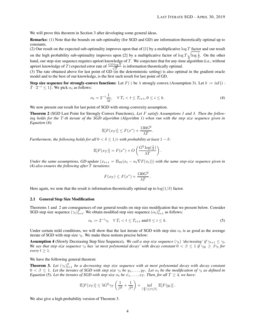 Stochastic Gradient Descent (SGD) is one of the most popular algorithms for solving large-scale empirical risk minimization (ERM) problems [3, 4, 5]. The algorithm updates the iterates using stochastic gradients obtained by sampling data points uniformly at random. The algorithm has been studied for several decades [6] but there are still significant gaps between practical implementations and theoretical analyses. In particular, the standard analyses hold only for some kind of average of iterates, but most practitioners just use the final iterate of SGD. So, [7] asked the natural question of whether the final iterate of SGD, as opposed to average of iterates, is provably good. It was partly answered in [1] which gave sub-optimality bound for the last point of SGD but the obtained sub-optimality rates are O(logT) worse than the information theoretically optimal rates; T is the number of iterations.

[2] showed that the above result is tight for the standard step-size sequence used by most existing theoretical results. The extra logarithmic factor is not due to the stochastic nature of SGD. In fact, even for subgradient descent (GD) when applied to general non-smooth, convex functions, the last point’s convergence rates are sub-optimal by O(logT) factor.

In general, SGD takes the iterates near the optimum value but since the objective isn’t smooth near the optimizer x∗, the gradients don’t become small even when the points are close to x∗. Standard step sizes don’t decay appreciably with time to ensure fast enough convergence to x∗. Therefore the iterates xt, after going close to x∗, start oscillating around it without actually approaching it (See Section 4 for concrete examples). Our new step sizes, given in Section 2.1 ensure that the step sizes decay fast enough after a certain point, making the iterates go closer to the optimum x∗. The exact mode of this decay ensures that the last iterate approaches the optimum at the information theoretic rate.

Our new step-size sequence requires that the number of iterations or horizon T is known apriori. In contrast, standard step-size sequences do not require T apriori, and hence guarantee any-time results. Information about T apriori helps us in ensuring that we do not drop step-size too early; only after we are close to the optimum, does the step size drop rapidly. In fact, we conjecture that in absence of apriori information about T, no step-size sequence can ensure the information theoretically optimal error rates for final iterate of SGD. As a step towards proving this, we show that in the case of strongly convex objectives, any choice of step sizes with infinite horizon (i.e, without the knowledge of total number of iterations) is either suboptimal almost surely or suboptimal in expectation for infinitely many points. We show this in Theorem 5.

Related Work: Averaging was used first in the stochastic approximation setting by [8] to show optimal rates of convergence. Gradient Descent type methods have been shown to achieve information theoretically optimal error rates in the convex and strongly convex settings when averaging of iterates is used ([9],[10],[11], [12]

[13] , SGD [14] and [15]). The question of the last iterate was first considered in [1] and it gives a bound of O(logT√T) and O(logTT) in expectation for the general case and strongly convex case respectively. [2] show matching high probability bounds and show that for the standard step sizes (O(1√t) in the general case and O(1t) in the strongly convex case), the logarithmic-suboptimal bounds are tight.

where objective function F:Rd→R is a convex function and W⊂Rd is a closed convex set. Let the global minimizer of F(⋅) be x∗∈W. We start the SGD algorithm at a point x1∈W

xt for the minimizer of F(⋅)

. We assume that at each time step, we have access to independent, unbiased estimate

Henceforth, we will retain the assumptions made above. Whenever we use gt(x), it is implied that gt(x)∈∂F(x). Throughout the paper, we assume that F is a Lipschitz continuous convex function.

The theorem below provides suboptimality guarantee for the SGD algorithm with the step-size sequence mentioned above.

Finally, under the same assumptions, GD update (xt+1=ΠW(xt−αt∇F(xt))) with the same step-size sequence given in (3) also ensures the following after T iterations:

We will prove this theorem in Section 3 after developing some general ideas.

Remarks: (1) Note that the bounds on sub-optimality (for SGD and GD) are information theoretically optimal up to constants. (2) Our result on the expected sub-optimality improves upon that of [1] by a multiplicative logT factor and our result on the high probability sub-optimality improves upon [2] by a multiplicative factor of logT√log1δ. On the other hand, our step-size sequence requires apriori knowledge of T. We conjecture that for any-time algorithm (i.e., without apriori knowledge of T) expected error rate of GDlogT√T is information theoretically optimal. (3) The rate obtained above for last point of GD (in the deterministic setting) is also optimal in the gradient oracle model and to the best of our knowledge, is the first such result for last point of GD.

We now present our result for last point of SGD with strong-convexity assumption.

Let F satisfy Assumptions 1 and 3. Then the following holds for the T-th iterate of the SGD algorithm (Algorithm 1) when run with the step size sequence given in Equation (4):

Furthermore, the following holds for all 0<δ≤1/e with probability at least 1−δ:

Under the same assumptions, GD update (xt+1=ΠW(xt−αt∇F(xt))) with the same step-size sequence given in (4) also ensures the following after T iterations:

Here again, we note that the result is information theoretically optimal up to log(1/δ) factor.

We have the following general theorem:

We also give a high probability version of Theorem 3.

be any arbitrary fixed probability distribution over the set

That is, the above theorems show that compared to any weighted average of function values of iterates in the [T/4,T1] iterations, the error is not significantly larger if β is reasonably large and γT is small. Now, using standard analysis, we can ensure small average function value for iterates in [T/4,T1] iterations. Small value of γT and bound on β hold trivially for standard step-size sequences.

See Section 3 for detailed proofs of the above theorems. We first develop general technique and prove key lemmas in the next section, and then present proofs for all the theorems.

The step size modification procedure described above assumed the knowledge of the last iterate T (this is not a setback in practice). We study the case of infinite horizon SGD. In this section we state our bounds on the last iterate of ‘any time’ (infinite horizon) SGD in the case of strongly convex objectives. We will first introduce the notion of suboptimality that we consider. In particular, we look at two kinds of ‘bad performance’ in infinite horizon SGD for non-smooth strongly convex optimization. Consider any infinite step size sequence γt.

We give a ‘no free lunch’ theorem: that is we show that infinite horizon step-size sequence for non-smooth strongly convex optimization is either ‘bad in expectation’ or ‘bad almost surely’. More precisely, we will show that if any infinite horizon SGD is good in ‘expectation’ for every t for every strongly convex function, then it is ‘bad almost surely’ for some function F.

Consider infinite horizon SGD with step size γt such that assumptions 1 2 and  3 hold for the objective function. Then, for any choice of γt>0, the algorithm is either bad in expectation or bad almost surely.

We give the proof in Section B.

Recall the definition of Ti from Section 2. The rough idea behind the proof is as follows: we will find a ‘good point’ in the range [⌈T4⌉,T1] and then show that this implies that there is a ‘good point’ between T1=T/2 and T2≈3T/4 and so on, until we conclude that xT is a good point.

To this end, we first provide a key lemma that bounds the total weighted deviation of SGD iterates from a given iterate xt0 (in terms of function value), i.e., it intuitively shows that once we find an iterate with small function value, the remaining iterates cannot deviate from it significantly. The lemma uses a trick that was first used in [16] and then also in [1].

By convexity of W, we have:

Taking squares and expanding on both sides,

Taking expectation on both sides, and realizing that ^gt is independent of xt and xt0, we conclude,

The result now follows by summing the above term from t=t0 to t=t1. ∎

We now provide a high probability version of Lemma 1. To this end, we construct an exponential super-martingale that when combined with a Chernoff bound leads to exponential concentration bound. The method used is somewhat similar to the one used in [2], but our technique is specifically for Lemma 1 and is more concise.

For simplicity of exposition, we first define a few key quantities. Let 1<t0<t1≤T and r=t1−t0+1. We define the sequence Lt as follows: for t0≤t≤t1 as follows:

, we define the following random variables :

Additionally, if diam(W)≤D almost surely, we have:

See Section A for proofs of the above given lemmata. We also require the following technical lemma:

Lemma follows from the fact that 2⌈a⌉−1≤⌈2a⌉≤2⌈a⌉. ∎

Henceforth, we will assume that γt is a decreasing step size sequence with at most polynomial decay (decay constant being β). We let αt be the modification of γt as defined in Equation 5. Let,

Note that τk+1=T. We note that τi are completely deterministic and only used as part of the proof. The ability to compute τi is not necessary.

We now present a high probability version of Lemma 5.

For i=0, the following holds with probability atleast 1−δ0:

We exchange summation and collect the coefficients of the term F(xt) to conclude:

The proof of this lemma is given in Section A

Recall the definition of τi in (8). Clearly, τk+1=T. Summing the bounds in Lemma 5 we conclude:

We conclude the result by noting that xt=yt for all t≤T1. ∎

This proof is similar to the proof of Theorem 3, but instead of Lemma 5 we use Lemma 6. In Lemma 6, we pick q(i)=p(i) for 1≤i≤k−1 and we let q(0) be arbitrary. We let δi=δ2i+2. By union bound, the inequalities in the statement of Lemma 6 hold for all 0≤i≤k−1 simultaneously with probabiliy atleast 1−∑k−1i=0δi≥1−δ2. Summing all these inequalities, we conclude:

We note that the distribution p(k) has unit mass over the point Tk+1=T and that xt=yt when t≤T1 to conclude the result. ∎

We note that the step size defined in Equation (3) is the modification of the standard step size γt=C√T. Let yt be the output of SGD under the assumptions of the theorem when step size γt is used. Using the fact that infimum is smaller than any weighted average, we have: