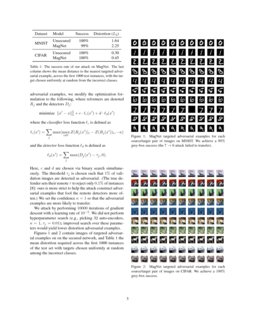 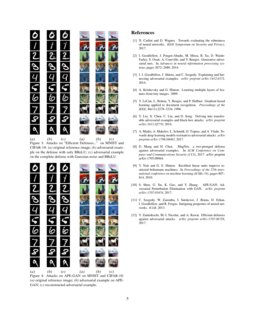 It has been shown that adversaries can craft example inputs to neural ne...
Mohammad Hashemi, et al. ∙

A survey on Adversarial Attacks and Defenses in Text

In this short paper, we demonstrate these three defenses are not effective on the MNIST [5] and CIFAR-10 [4] datasets. We show that we are able to bypass MagNet with greater than 99% success, and the latter two with 100%, with only a slight increase in distortion.

We defeat “Efficient Defenses Against Adversarial Attack” and APE-GAN by showing that existing attack can defeat them with 100% success without modification. Adversarial examples are not more visually detectable than an undefended network.

be a neural network used for classification outputting a probability distribution. Call the second-to-last layer (the layer before the the softmax layer)

Z, so that F(x)=softmax(Z(x)). Each output yi corresponds to the predicted probability that the object x is labelled as class i. Let C(x)=argmaxi F(xi) correspond to the classification of x on F. In this paper we are concerned with neural networks used to classify images (on MNIST and CIFAR-10).

Adversarial examples [11] are instances x′ that are very close to a normal instance x with respect to some distance metric (L2 distance, in this paper), but where C(x′)=t for any target t chosen by the adversary.

where the loss function

ℓ is defined as

and the constant c is chosen via binary search.

The authors argue these defenses complement each other: the detector should be able to detect any adversarial examples with large distortion and are far away from the true data manifold. The reformer takes instances which are close to the data manifold and maps them directly on to the manifold to remove any minor adversarial perturbations that may not have been detected.

The specific instantiation of the detector and reformer suggested by the authors are based on auto-encoders. Given an auto-encoder AE, to detect if an input is adversarial, compare the mean squared error ∥x−AE(x)∥2 with a threshold τ chosen to minimize the false positive rate. On CIFAR, the authors suggest one further detector: compute the Jensen-Shannon divergence JSD(F(x)/T,F(AE(x))/T) with temperature T (set to 10 and 40), and report “adversarial” if the difference is greater than a different threshold τ′, also chosen to minimize the false positive rate.

Similarly, to reform an adversarial example run it through the auto-encoder and let x←AE(x): since the auto-encoder is trained to reconstruct typical instances, this operation projects it back to the data manifold.

works by making two modifications to standard neural networks. First, the authors propose use of the Bounded ReLU activation function, defined as

APE-GAN [10] works by constructing a pre-processing network G(⋅) trained to project both normal instances and adversarial examples back to the data manifold as done in MagNet. The network G

is trained with a GAN instead of an auto-encoder. Note that unlike a standard GAN which takes as input a noise vector and must produce an output image, the generator in APE-GAN takes in an adversarial example and must make it appear non-adversarial. During training, the authors train on adversarial examples generated with the Fast Gradient Sign algorithm

[3]; despite this, the authors claim robustness on a wide range of attacks (including [1]).

Defense Models. We take the MagNet implementation from the authors’ open-source code 111https://github.com/Trevillie/MagNet and train our own models. Since the provided code does not include an implementation of the CIFAR defense and classifier, we implement it as described in the paper.

We were unable to obtain source code for “Efficient Defenses…”. We therefore re-implement the proposed defense based on the description in the paper. We take the APE-GAN implementation from the authors open-source code 222https://github.com/shenqixiaojiang/APE-GAN.

We demonstrate MagNet is not robust by generating transferable adversarial examples with Carlini and Wagner’s L2 attack. To do this, we (as the adversary) train 32 local auto-encoders to use as detectors and reformers (different than the 16 the defender will use). To generate adversarial examples, we modify the optimization formulation to the following, where reformers are denoted Rj and the detectors Dj:

where the classifier loss function ℓc is defined as

and the detector loss function ℓd is defined as

Here, c and d are chosen via binary search simultaneously. The threshold τj is chosen such that 1% of validation images are detected as adversarial. (The true defender sets their remote τ to reject only 0.1% of instances [8]: ours is more strict to help the attack construct adversarial examples that fool the remote detectors more often.) We set the confidence κ=1 so that the adversarial examples are more likely to transfer.

. We did not perform hyperparameter search (e.g., picking

Figures 1 and 2 contain images of targeted adversarial examples on on the secured network, and Table 1 the mean distortion required across the first 1000 instances of the test set with targets chosen uniformly at random among the incorrect classes.

We demonstrate this defense is not robust by generating adversarial examples with Carlini and Wagner’s L2 attack. We do nothing more than apply the attack to the defended network.

Figure 3 contains images of adversarial examples on the secured network, and Table 2 the mean distortion required across the first 1000 instances of the test set with targets chosen at random among the incorrect classes.

On MNIST, the full defense increases mean distance to the nearest adversarial example by 30%, and on CIFAR by 20%. This is in contrast with other forms of retraining, such as adversarial retraining [7], which increase distortion by a significantly larger amount. Interestingly, we find that BReLU provides some increase in distortion when trained without Gaussian augmentation, but when trained with it, does not help.

We demonstrate APE-GAN is not robust by generating adversarial examples with Carlini and Wagner’s L2 attack. We do nothing more than apply the attack to defended network. That is, we change the loss function to account for the fact that the manifold-projection is done before classification. Specifically, we let

and solve the same minimization formulation.

Figure 4 contains images of adversarial examples on APE-GAN, and Table 3 the mean distortion required across the first 1000 instances of the test set with targets chosen at random among the incorrect classes.

As this short paper demonstrates, MagNet is not robust to transferable adversarial examples, and combining Gaussian data augmentation and BReLU activations does not significantly increase the robustness of a neural network against strong iterative attacks. Surprisingly, we found that while all three defenses take different approaches to increasing the robustness against adversarial examples, they all give approximately the same increase in robustness (∼30%).

We recommend that researchers who propose defenses attempt adaptive white-box attacks against their schemes before claiming robustness. Or, if arguing security in the grey-box threat model, we recommend researchers generate adversarial examples targeting the specific defense by using a copy of that defense as the source model. Just because the adversary is not aware of the exact parameters, does not mean the best that can be done is to transfer from an unsecured model: as we have shown here, transfering from a local copy of the model improves the attack success rate.