Machine Learning of Thermodynamic Observables in the Presence of Mode Collapse

Estimating the free energy, as well as other thermodynamic observables, is a key task in lattice field theories. Recently, it has been pointed out that deep generative models can be used in this context [1]. Crucially, these models allow for the direct estimation of the free energy at a given point in parameter space. This is in contrast to existing methods based on Markov chains which generically require integration through parameter space. In this contribution, we will review this novel machine-learning-based estimation method. We will in detail discuss the issue of mode collapse and outline mitigation techniques which are particularly suited for applications at finite temperature. 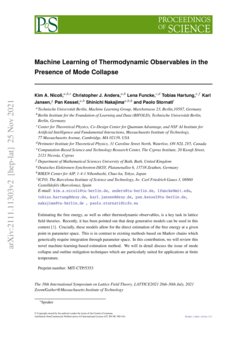 Machine-learning physics from unphysics: Finding deconfinement temperature in lattice Yang-Mills theories from outside the scaling window

Almost sure convergence of the accelerated weight histogram algorithm

Another important application of flows was recently pointed out in [nicoli2020asymptotically]

: they can directly estimate the free energy of a lattice field theory (which can also be accomplished with methods such as tensor networks, see, e.g.,

[akiyama2020tensor] and references therein). The free energy is important as it allows to compute the entropy, pressure and the equation of state of the considered physical system. In the case of Quantum Chromodynamics, such thermodynamic observables are of the utmost importance in the physics of the early universe and are probed by heavy ion experiments [busza2018heavy].

In the following, we will review this deep-learning-based estimation technique of the free energy and discuss the important issue of mode collapse. To illustrate the mode collapse of the flow in a concrete example, consider a target density with two modes, as is the case for a quantum mechanical particle in a double well potential or scalar

ϕ4-theory in the broken phase. The latter example will be discussed in detail in Section 3.2. For both systems, the theory has a spontaneously broken Z2 symmetry and thus two modes corresponding to the vacuum expectation values ±Φ. As we will discuss in Section 2.1

, the training process can however lead to a flow that only approximates one mode of the target density of the lattice field theory and assigns (almost) vanishing probability mass to the other

[nicoli2021estimation, hackett2021flow]. This will lead to systematic errors of the free energy estimate which can be difficult to detect. In this contribution, we report on both mitigation and detection techniques for such a mode collapse and demonstrate their effectiveness for the example of two-dimensional scalar ϕ4 theory.

Let f:M→N be an orientation-preserving diffeomorphism between two orientable n-dimensional Riemannian manifolds M and N. We assume that there is a probability measure qdV defined on M where dV is the measure associated with volume form on M and q:M→R+ is a positive smooth map. In particular, it holds that ∫MqdV=1. The push-forward measure f∗(qdV) is then a probability measure on N.

In coordinates (xi,U) on N, the push-forward f∗(qdV) takes the form

where |f′| is the determinant of the Jacobian. In the machine learning literature, one therefore often refers to

as the push-forward density of q.

We will be interested in the case M=N=Rn since we will consider real-valued scalar fields. The basic idea of a normalizing flow is to define a family of diffeomorphisms fθ with parameters θ. We then adjust these parameters θ such that the push-forward density (fθ)∗q closely approximates a certain target density p.

In practice, the diffeomorphism fθ

is parameterized by a deep neural network. Neural networks are composite functions of the form

with weights Wi∈Rn,n and biases bi∈Rn being the free parameters of the neural network, i.e. θ={(Wi,bi)}Ki=1.111We restrict to all weights and biases being of the same dimensionality since we will be interested in networks that can be used to model invertible maps. Furthermore, σ(z) is a non-linear function, such as σ(z)=tanh(z)

, which is applied element-wise to each component of the vector

Wiz+bi∈Rn. A neural network is called deep if the number of layers L is large (although there is no clearly defined threshold).

There are various approaches for parameterizing diffeomorphisms by neural networks. We will restrict to a particularly straightforward approach, called Non-linear Independent Component Estimation (NICE), which splits the input z=(zu,zd)∈Rn in two parts zu∈Rn−k and zd∈Rk for given k∈{1,n−1}. A diffeomorphism is then given by

where mθ is a (not necessarily invertible) neural network of the form (2). Due to the splitting of the input z, this can be easily inverted by

For the NICE architecture, the determinant of the Jacobian is given by

A normalizing flow fθ∗q is typically chosen to be a push-forward of a simple base density, e.g. q=N(0,1). This allows for efficient sampling by first drawing z∼N(0,1) and then applying the diffeomorphism fθ to the sample z, i.e.

where the push-forward density fθ∗q is given by (1).

2.1 Training of the Flow

where ϕ, S and Z denote the field, its action, and the partition function respectively. A similarity measure between two densities p and fθ∗q is given by the Kullback–Leibler (KL) divergence

The KL divergence is non-negative and vanishes if and only if both densities are equal, i.e. p=q.222We restrict to continuous densities here. Otherwise, the densities can have different values on a set of zero measure. We can therefore train the flow to approximate the target density q by minimizing this KL divergence using gradient descent, i.e. θ←θ−∇θKL(fθ∗q||p). For this, we observe that the KL divergence can be rewritten as

where the last summand contains terms independent of θ and can thus be ignored for gradient descent. We now sample from the flow to obtain its Monte-Carlo estimator, i.e.

The log probability can efficiently be calculated by (1). Additionally, we can very efficiently sample from the flow by pushing forward samples from the base density, see (4). However, the training of the flow may yield poor results for a multi-modal target density. This is because the training relies on self-sampling. During training, self-sampling may lead to a collapse of almost all the flow’s probability mass to a subset of the modes of the target density p. The KL divergence does not penalize this behaviour since the flow does no longer produce samples from the other modes of the target density p. We will discuss both detection and mitigation of mode collapse in the next section.

where Z is the partion function. The temperature is given by T=1NTa with lattice spacing a and NT denoting the number of lattice points along the temporal direction of the lattice.

Estimating the free energy with MCMC is challenging. To illustrate this fact, we discuss a reweighting procedure [de2001t, philipsen2013qcd] which starts from the observation that the difference in free energies ΔFeb=Fe−Fb=−Tlog(ZeZb) between two different points e and b in parameter space can be calculated by

This expectation value can be estimated by MCMC. If we choose the point b in parameter space such that the free energy Fb can be calculated exactly or approximately, we can obtain the value of the free energy at the point e by Fe=ΔFeb+Fb.

In practice, the variance of the estimator (

8) will become prohibitively large if the two distributions pb and pe have a small overlap. This can be avoided by choosing intermediate distributions pi1,…piK such that neighbouring distributions pik and pik+1 overlap sufficiently. The free energy difference can then be obtained by

This comes at the price of an accumulated error of all free energy differences ΔFikik+1. The error therefore crucially depends on all points of the (discretized) trajectory connecting the points e and b in parameter space.

This dependence on the trajectory can lead to serious problems, as we illustrate in a concrete example of the ϕ4 theory in two dimensions with the action

with Kn being the Bessel function of the second kind.

in order to ensure sufficient overlap. Crucially, the estimate of the free energy in the broken phase will now suffer from critical slowing down as the corresponding trajectory has to cross the phase transition in order to reach the initial hopping parameter

κa=0. This will lead to a significant increase in the statistical error, see Figure 1.

3.3 Flow-based Estimators of the Free Energy

Normalizing flows allow us to directly estimate the free energy F=−Tlog(Z) at a given point in parameter space and therefore allow us to avoid critical slowing down in the specific situations discussed in the previous section. This can be seen by observing that we can estimate the partition function Z using a trained flow in two different ways. Firstly, we can use samples from the flow

Using this definition, we obtain the reverse estimator of the free energy by

Secondly, one can use samples from the target density p

to obtain the forward estimator

Both estimators have relative strengths and weaknesses. If we are confident that the flow closely approximates the target density p, it is advisable to use the reverse estimator (12) because sampling from the flow is more efficient. However, this estimator may lead to incorrect results if the flow is mode-dropping. In contrast, the forward estimator ^Fp uses samples from p and thus cannot neglect any mode of the target density p. If mode-dropping is a risk (for example in the broken phase of the ϕ4-theory), one should therefore also use the forward estimator (12) as a consistency check.

In the following, we will illustrate the difference in using the forward and the reverse variants for the free energy estimation in the presence of mode-dropping. To this end, we consider two normalizing flows trained for the two-dimensional scalar ϕ4-theory for a hopping parameter of κ=0.6 and a bare coupling of λ=0.022 on a NT×NL=16×8 lattice. The theory is thus considered in its broken phase, see Figure 2. One of the flows is mode-collapsed on a single mode of the target density p, while the other flow covers both modes, as can be seen on the right of Figure 2. For both flows, we then use the forward estimator ^Fp and reverse estimator ^Fq as defined in (12) and (11) respectively. The estimated values for the free energy are visualized in Figure 2. For the mode-collapsed flow, we see a clear discrepancy in the prediction while the mode-covering flow leads to consistent values of the forward and reverse estimators. The fact that the forward estimator ^Fq

In summary, this experiment clearly illustrates that forward estimation of the free energy is crucial in the presence of mode collapse.

Deep generative models, in particular normalizing flows, allow for a direct estimation of the free energy. Current normalizing flow architectures are however far from perfect. For example, they are challenging to train in the broken phase (particularly for larger lattices) and can suffer from mode collapse for multi-modal densities. In this contribution, we have briefly outlined how forward estimation of the free energy can help to mitigate this weakness.

K.A.N. , C.A. , P.K. and S.N. are funded by the German Ministry for Education and Research as BIFOLD - Berlin Institute for the Foundations of Learning and Data (ref. 01IS18025A and ref 01IS18037A). P.S. is supported from Agencia Estatal de Investigación (“Severo Ochoa” Center of Excellence CEX2019-000910-S, Plan National FIDEUA PID2019-106901GB-I00/10.13039 / 501100011033, FPI) ), Fundació Privada Cellex, Fundació Mir-Puig, and from Generalitat de Catalunya (AGAUR Grant No. 2017 SGR 1341, CERCA program). L.F. is partially supported by the Co-Design Center for Quantum Advantage (C2QA) under subcontract number 390034, by the DOE QuantiSED Consortium under subcontract number 675352, by the National Science Foundation under Cooperative Agreement PHY-2019786 (The NSF AI Institute for Artificial Intelligence and Fundamental Interactions, http://iaifi.org/), and by the U.S. Department of Energy, Office of Science, Office of Nuclear Physics under grant contract numbers DE-SC0011090 and DE-SC0021006. Research at Perimeter Institute is supported in part by the Government of Canada through the Department of Innovation, Science and Industry Canada and by the Province of Ontario through the Ministry of Colleges and Universities.