Accurate classification of seizure types plays a crucial role in the treatment and disease management of epileptic patients. Epileptic seizure type not only impacts on the choice of drugs but also on the range of activities a patient can safely engage in. With recent advances being made towards artificial intelligence enabled automatic seizure detection, the next frontier is the automatic classification of seizure types. On that note, in this paper, we undertake the first study to explore the application of machine learning algorithms for multi-class seizure type classification. We used the recently released TUH EEG Seizure Corpus and conducted a thorough search space exploration to evaluate the performance of a combination of various pre-processing techniques, machine learning algorithms, and corresponding hyperparameters on this task. We show that our algorithms can reach a weighted F1 score of up to 0.907 thereby setting the first benchmark for scalp EEG based multi-class seizure type classification. 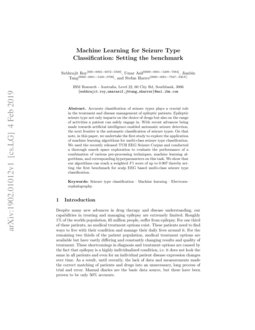 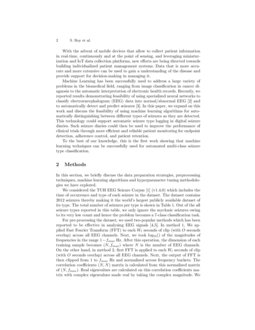 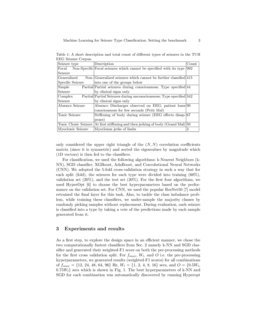 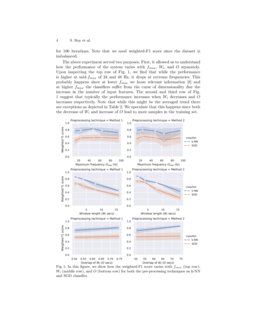 Classification of seizure type is a key step in the clinical process for...
David Ahmedt-Aristizabal, et al. ∙

Classification of seizure type is a key step in the clinical process for...
David Ahmedt-Aristizabal, et al. ∙

Machine Learning Evaluation of the Echo-Chamber Effect in Medical Forums

Despite many new advances in drug therapy and disease understanding, our capabilities in treating and managing epilepsy are extremely limited. Roughly 1% of the world’s population, 65 million people, suffer from epilepsy. For one third of these patients, no medical treatment options exist. These patients need to find ways to live with their condition and manage their daily lives around it. For the remaining two thirds of the patient population, medical treatment options are available but have vastly differing and constantly changing results and quality of treatment. These shortcomings in diagnosis and treatment options are caused by the fact that epilepsy is a highly individualized condition, i.e. it does not look the same in all patients and even for an individual patient disease expression changes over time. As a result, until recently, the lack of data and measurements made the correct matching of patients and drugs into an unnecessary, long process of trial and error. Manual diaries are the basic data source, but these have been proven to be only 50% accurate.

With the advent of mobile devices that allow to collect patient information in real-time, continuously and at the point of sensing, and leveraging miniaturization and IoT data collection platforms, new efforts are being directed towards building individualized patient management systems. Data that is more accurate and more extensive can be used to gain a understanding of the disease and provide support for decision-making in managing it.

Machine Learning has been successfully used to address a large variety of problems in the biomedical field, ranging from image classification in cancer diagnosis to the automatic interpretation of electronic health records. Recently, we reported results demonstrating feasibility of using specialized neural networks to classify electroencephalogram (EEG) data into normal/abnormal EEG

[2] and to automatically detect and predict seizures [3]. In this paper, we expand on this work and discuss the feasibility of using machine learning algorithms for automatically distinguishing between different types of seizures as they are detected. This technology could support automatic seizure type logging in digital seizure diaries. Such seizure diaries could then be used to improve the performance of clinical trials through more efficient and reliable patient monitoring for endpoint detection, adherence control, and patient retention.

To the best of our knowledge, this is the first work showing that machine learning techniques can be successfully used for automated multi-class seizure type classification.

In this section, we briefly discuss the data preparation strategies, preprocessing techniques, machine learning algorithms and hyperparameter tuning methodologies we have explored.

We considered the TUH EEG Seizure Corpus [1] (v1.4.0) which includes the time of occurrence and type of each seizure in the dataset. The dataset contains 2012 seizures thereby making it the world’s largest publicly available dataset of its type. The total number of seizures per type is shown in Table 1. Out of the all seizure types reported in this table, we only ignore the myclonic seizures owing to its very low count and hence the problem becomes a 7-class classification task.

For pre-processing the dataset, we used two-popular methods which has been reported to be effective in analysing EEG signals [4, 5]

. In method 1, We applied Fast Fourier Transform (FFT) to each

. Real eigenvalues are calculated on this correlation coefficients matrix with complex eigenvalues made real by taking the complex magnitude. We only considered the upper right triangle of the

correlation coefficients matrix (since it is symmetric) and sorted the eigenvalues by magnitude which (1D vectors) is then fed to the classifiers.

For classification, we used the following algorithms: k-Nearest Neighbors (k-NN), SGD classifier, XGBoost, AdaBoost, and Convolutional Neural Networks (CNN). We adopted the 5-fold cross-validation strategy in such a way that for each split (fold), the seizures for each type were divided into training (60%), validation set (20%), and the test set (20%). For the first four algorithms, we used HyperOpt

[6] to choose the best hyperparameters based on the performance on the validation set. For CNN, we used the popular ResNet50 [7] model retrained the final layer for this task. Also, to tackle the class imbalance problem, while training these classifiers, we under-sample the majority classes by randomly picking samples without replacement. During evaluation, each seizure is classified into a type by taking a vote of the predictions made by each sample generated from it.

As a first step, to explore the design space in an efficient manner, we chose the two computationally fastest classifiers from Sec. 2 namely k-NN and SGD classifier and generated their weighted-F1 score on both the pre-processing methods for the first cross validation split. For fmax, Wl, and O i.e. the pre-processing hyperparameters, we generated results (weighted-F1 scores) for all combinations of fmax = {12, 24, 48, 64, 96} Hz, Wl = {1, 2, 4, 8, 16} secs, and O = {0.5Wl, 0.75Wl} secs which is shown in Fig. 1. The best hyperparameters of k-NN and SGD for each combination was automatically discovered by running Hyperopt for 100 iterations. Note that we used weighted-F1 score since the dataset is imbalanced.

The above experiment served two purposes. First, it allowed us to understand how the performance of the system varies with fmax, Wl, and O separately. Upon inspecting the top row of Fig. 1, we find that while the performance is higher at mid-fmax

of 24 and 48 Hz, it drops at extreme frequencies. This probably happens since at lower

fmax we loose relevant information [8] and at higher fmax

the classifiers suffer from the curse of dimensionality due the increase in the number of input features. The second and third row of Fig.

1 suggest that typically the performance increases when Wl decreases and O increases respectively. Note that while this might be the averaged trend there are exceptions as depicted in Table 2. We speculate that this happens since both the decrease of Wl and increase of O lead to more samples in the training set.

In this article, we performed the first exploratory study to show that machine learning techniques can be used to classify the type of detected seizures. We hope that automatic classification of seizure types will improve long-term patient care, enabling timely drug adjustments and remote monitoring.