We describe two recently proposed machine learning approaches for discovering emerging trends in fatal accidental drug overdoses. The Gaussian Process Subset Scan enables early detection of emerging patterns in spatio-temporal data, accounting for both the non-iid nature of the data and the fact that detecting subtle patterns requires integration of information across multiple spatial areas and multiple time steps. We apply this approach to 17 years of county-aggregated data for monthly opioid overdose deaths in the New York City metropolitan area, showing clear advantages in the utility of discovered patterns as compared to typical anomaly detection approaches. To detect and characterize emerging overdose patterns that differentially affect a subpopulation of the data, including geographic, demographic, and behavioral patterns (e.g., which combinations of drugs are involved), we apply the Multidimensional Tensor Scan to 8 years of case-level overdose data from Allegheny County, PA. We discover previously unidentified overdose patterns which reveal unusual demographic clusters, show impacts of drug legislation, and demonstrate potential for early detection and targeted intervention. These approaches to early detection of overdose patterns can inform prevention and response efforts, as well as understanding the effects of policy changes. 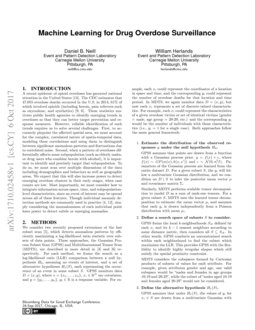 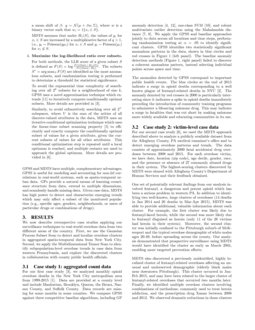 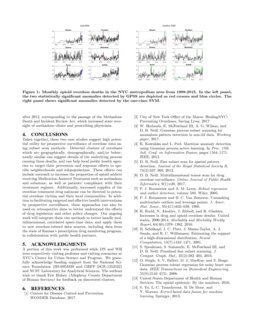 . The CDC estimates that 47,055 overdose deaths occurred in the U.S. in 2014, 61% of which involved opioids (including heroin, pain relievers such as oxycodone, and synthetics)

[9, 6]. These statistics motivate public health agencies to identify emerging trends in overdoses so that they can better target prevention and response measures. However, reliable identification of such trends requires us to solve several challenges. First, to accurately pinpoint the affected spatial area, we must account for the complex, correlated nature of spatio-temporal data, modeling these correlations and using them to distinguish between significant anomalous patterns and fluctuations due to correlated noise. Second, when a pattern of overdoses differentially affects some subpopulation (such as elderly males, or drug users who combine heroin with alcohol), it is important to identify and precisely target that subpopulation. To do so, we must scan over multiple dimensions of the data including demographics and behaviors as well as geographic areas. We expect that this will also increase power to detect emerging overdose clusters in their early stages, when case counts are low. Most importantly, we must consider how to integrate information across space, time, and subpopulation-level characteristics, since an event of interest may be spread across all of these features. Though individual anomaly detection methods are commonly used in practice [4, 12], simply considering the anomalousness of each individual point loses power to detect subtle or emerging anomalies.

We consider two recently proposed extensions of the fast subset scan [5], which detects anomalous patterns by efficiently maximizing a log-likelihood ratio statistic over subsets of data points. These approaches, the Gaussian Process Subset Scan (GPSS) and Multidimensional Tensor Scan (MDTS), are described in more detail in [3] and [6]

respectively. For each method, we frame the search as a log-likelihood ratio (LLR) comparison between a null hypothesis

H0, assuming no events of interest, and a set of alternative hypotheses H1(S), each representing the occurrence of an event in some subset S. GPSS monitors data D=(x,y), where x={x1,…,xn}, xi∈RD are covariates, and y={y1,…,yn}, yi∈R

is a response variable. For example, each

GPSS and MDTS have multiple, complementary advantages. GPSS is useful for modeling and accounting for non-iid correlations in real-world systems, such as spatio-temporal urban data. GPs provide a natural means of learning covariance structure from data, extend to multiple dimensions, and seamlessly handle missing data. Given case data, MDTS has high power to detect and characterize emerging trends which may only affect a subset of the monitored population (e.g., specific ages, genders, neighborhoods, or users of particular drugs or combinations of drugs).

We now describe retrospective case studies applying our surveillance techniques to real-world overdose data from two different areas of the country. First, we use the Gaussian Process Subset Scan to detect and localize overdose clusters in aggregated spatio-temporal data from New York City. Second, we apply the Multidimensional Tensor Scan to identify subpopulation-level overdose trends in case data from western Pennsylvania, and explore the discovered clusters in collaboration with county public health officials.

For our first case study [3], we analyzed monthly opioid overdose deaths in the New York City metropolitan area from 1999-2015 [1]. Data are provided at a county level and include Manhattan, Brooklyn, Queens, the Bronx, Nassau County, and Suffolk County. Data records are missing for some months in some counties. We compare GPSS against three competitive baseline algorithms, including GP anomaly detection [4, 12], one-class SVM [10]

The anomalies detected by GPSS correspond to important public health events. The blue circles at the end of 2015 indicate a surge in opioid deaths corresponding to a well known plague of fentanyl-related deaths in NYC [2]. The anomaly denoted by red crosses in 2006 is particularly interesting since it indicates a spike in opioid deaths immediately preceding the introduction of community training programs to administer a lifesaving naloxone drug. This may indicate a surge in fatalities that was cut short by making naloxone more widely available and educating communities in its use.

For our second case study [6]

, we used the MDTS approach described above to analyze a publicly available dataset from the Allegheny County, PA medical examiner’s office and to detect emerging overdose patterns and trends. The data consists of approximately 2000 fatal accidental drug overdoses between 2008 and 2015. For each overdose victim, we have date, location (zip code), age decile, gender, race, and the presence or absence of 27 commonly abused drugs in their system. The highest-scoring clusters discovered by MDTS were shared with Allegheny County’s Department of Human Services and their feedback obtained.

One set of potentially relevant findings from our analysis involved fentanyl, a dangerous and potent opioid which has been a serious problem in western PA. In addition to identifying two well-known, large clusters of overdoses (14 deaths in Jan 2014 and 26 deaths in Mar-Apr 2015), MDTS was able to provide additional, valuable information about each cluster. For example, the first cluster was likely due to fentanyl-laced heroin, while the second was more likely due to fentanyl disguised as heroin (only 11 of the 26 victims had heroin in their system). Moreover, the second cluster was initially confined to the Pittsburgh suburb of McKeesport and the typical overdose demographic of white males ages 20-49, before spreading across the county. Our analysis demonstrated that prospective surveillance using MDTS would have identified the cluster as early as March 29th, enabling more targeted prevention efforts.

MDTS also discovered a previously unidentified, highly localized cluster of fentanyl-related overdoses affecting an unusual and underserved demographic (elderly black males near downtown Pittsburgh). This cluster occurred in Jan-Feb 2015, and may have been related to the larger cluster of fentanyl-related overdoses that occurred two months later. Finally, we identified multiple overdose clusters involving combinations of methadone, commonly used to treat heroin addiction, and the prescription drug Xanax between 2008 and 2012. We observed dramatic reductions in these clusters after 2012, corresponding to the passage of the Methadone Death and Incident Review Act, which increased state oversight of methadone clinics and prescribing physicians.

Taken together, these two case studies suggest high potential utility for prospective surveillance of overdose data using subset scan methods. Detected clusters of overdoses which are geographically, demographically, and/or behaviorally similar can suggest details of the underlying process causing these deaths, and can help local public health agencies to target their prevention and response efforts to specific neighborhoods and subpopulations. These efforts can include outreach to increase the proportion of opioid addicts receiving Medication-Assisted Treatment such as methadone and suboxone, as well as patients’ compliance with their treatment regimes. Additionally, increased supplies of the overdose treatment drug naloxone can be directed to potential overdose victims and their local communities. In addition to facilitating targeted and effective health interventions by prospective surveillance, these approaches can also be used on retrospective data to better understand the effects of drug legislation and other policy changes. Our ongoing work will integrate these two methods to better handle multidimensional, correlated space-time data, and apply them to new overdose-related data sources, including data from the state of Kansas’s prescription drug monitoring program, in collaboration with public health partners.

A portion of this work was performed while DN and WH were respectively visiting professor and visiting researcher at NYU’s Center for Urban Science and Progress. We gratefully acknowledge funding support from the National Science Foundation (IIS-0953330 and GRFP DGE-1252522) and NCSU Laboratory for Analytical Sciences. The authors wish to thank Eric Hulsey (Allegheny County Department of Human Services) for feedback on discovered clusters.