We introduce a machine-learning-based framework for constructing continuum non-Newtonian fluid dynamics model directly from a micro-scale description. Polymer solution is used as an example to demonstrate the essential ideas. To faithfully retain molecular fidelity, we establish a micro-macro correspondence via a set of encoders for the micro-scale polymer configurations and their macro-scale counterparts, a set of nonlinear conformation tensors. The dynamics of these conformation tensors can be derived from the micro-scale model and the relevant terms can be parametrized using machine learning. The final model, named the deep non-Newtonian model (DeePN^2), takes the form of conventional non-Newtonian fluid dynamics models, with a new form of the objective tensor derivative. Numerical results demonstrate the accuracy of DeePN^2. 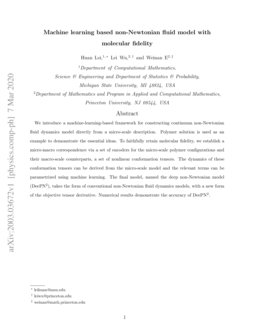 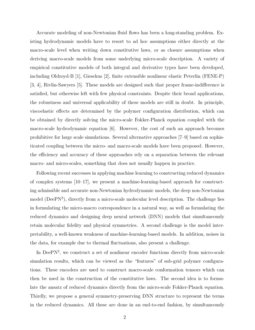 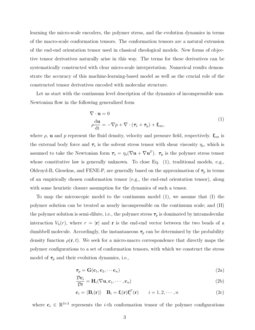 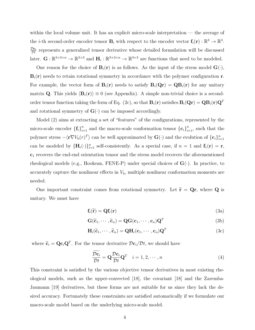 A long standing problem in the modeling of non-Newtonian hydrodynamics i...
Lidong Fang, et al. ∙

In this paper a new monolithic Eulerian formulation in the framework of ...
Nazim Hussain, et al. ∙

Uniformly accurate numerical schemes for a class of dissipative systems

The purpose of this paper is to advance the understanding of the conditi...
James Paulin, et al. ∙

In this section, we show that both the modeling ansatz and the DNN representation of the DeePN2 model satisfy the rotational invariance condition.

a.1 Rotational invariance from the continuum and microscopic perspective

Let us consider a symmetric tensor c∈R3×3 in two different coordinate frames. Frame 1 is a static inertial frame. We let ~x, ~v:=v(~x,t), ~c:=c(~x,t), the position, velocity and c in frame 1. Framework 2 is a rotated frame which is related to frame 1 by a unitary matrix Q(t). We denote x, v(x,t), c(x,t) the position, velocity and c in frame 2. Accordingly, x, c and v follows the transformation rule

To construct the dynamics of c, we need to choose an objective derivative DcDt which retains proper rotational symmetry, i.e.,

For example, if we choose D/Dt as the material derivative ddt:=∂∂t+v⋅∇, Eq. (17) cannot be satisfied, since

where the second identity follows from

Alternatively, if we choose D/Dt to be the objective tensor derivatives coupled with κ:=(∇v)T, e.g., the upper-convected ▽c=dcdt−κc−cκT, covariant derivative △c=dcdt+κTc+cκ, the Jaumann derivative ∘c=12(▽c+△c), Eq. (17) is satisfied. For example,

On the other hand, this analysis does not provide us concrete guidance to constructing DcDt, since multiple choices such as ▽c, △c and ∘c all satisfy Eq. (17). To address this issue, we look for a micro-scale perspective based on the Fokker-Planck equation to understand the rotational invariance and construct DcDt.

Let us consider the Fokker-Planck equation of a dumb-bell polymer with end-end vector r coupled with flow field v. By ignoring the external field, the evolution of the density ρ(r,t) is governed by

where γ is the friction coefficient of the solvent, Vb(r) is the intra-molecule potential energy.

Eq. (21) retains rotational invariance under the transformation by Eq. (16), i.e.

where we have used the fact that ˙QTQ is anti-symmetric. In addition, it is straightforward to show that the terms ∇2ρ and ∇⋅∇Vb(r) are invariant. Therefore we have (22). ∎

Accordingly, if we define c to be the mean value of a second-order tensor B(r):R3→R3×3, the dynamics follows

where we have used the relation

The rotational symmetry of the other terms follows similarly. ∎

The above analysis shows that, from the perspective of the Fokker-Planck equation, the evolution dynamics retains the rotational symmetry. In particular, the term ddt⟨~B⟩−~κ:⟨~r∇~r⊗~B⟩ provides a microscopic perspective for understanding the objective tensor derivative DBDt, which we use to construct the DNN representation of the constitutive models.

Next we establish a micro-macro correspondence via a set of encoder {gi(r)}ni=1 (see Proposition A.4 for details) and, accordingly, a set of micro-scale tensor Bi and ci, i.e.,

We will use {ci}ni=1 to construct the evolution dynamics (24) via some proper DNN structure which retains the rotational invariance. In particular, we consider the fourth-order tensor ⟨r∇r⊗B⟩ and show that the following DNN representation (see also Eq. (11) in main text) ensures the rotational symmetry of DBDt. For simplicity, the subscript i is ignored and we use c to denote the set of conformation tensor {ci}ni=1.

The following ansatz of ⟨r∇r⊗B⟩ ensures that the dynamic of evolution of c retains rotational invariance.

where G1 and G2 satisfy

Without loss of generality, we represent the fourth order tensor by the following two basis

where the super-script T{2,3} represent the transpose between the 2nd and 3rd indices; also F1, F2, F3, G1 and G2 satisfy the symmetry conditions

where we have used Tr(˙QQT)≡0.

On the other hand, note that

To ensure the rotational symmetry of DBDt, we have

Accordingly, the remaining part of ⟨r∇r⊗B⟩ is expanded by

ensures the rotational invariance in the dynamic equation of c. ∎

Appendix B The micro-scale model

where ks is the spring constant and r=|r| and r is the end-end vector between the two beads of a polymer molecule. In addition, pairwise interactions are imposed between all particles (except the intramolecular pairs bonded by Vb) under dissipative particle dynamics Hoogerbrugge and Koelman (1992); Groot and Warren (1997), i.e.,

FCij, FDij, FRij are the total conservative, dissipative and random forces between particles i and j, respectively. rc is the cut-off radius beyond which all interactions vanish. The coefficients a, γ and σ represent the strength of the conservative, dissipative and random force, respectively. The last two coefficients are coupled with the temperature of the system by the fluctuation-dissipation theorem Espanol and Warren (1995) as σ2=2γkBT. Similar to Ref. Lei et al. (2010), the weight functions wD(r) and wR(r) are defined by

We refer to Ref. Lei et al. (2017) for the details of the reverse Poiseuille flow simulation and the calculation of the shear rate dependent viscosity. In all the numerical experiments, the number density of the solvent particle ns is set to be 4.0 and the number density of the polymer molecule np is set to be 0.5. Other model parameters are given in Tab. LABEL:tab:polymer_model_parameter.

The training dataset is collected from micro-scale shear flow simulations of the polymer solution in a domain [0,20]×[0,20]×[0,20], with periodic boundary condition imposed in each direction. The Lees-Edwards boundary condition Lees and Edwards (1972) is used to impose the shear flow rates ˙γ. The simulation is run for a production period of 5×104 with time step 10−3. 36000 samples of the polymer configurations are collected with ˙γ uniformly selected between [0,0.06]. 32000 samples are used for training and the remaining ones are used for testing.

The constructed DeePN2 model is represented by various DNNs for the encoders {gi(r)}ni=1, stress model G, evolution dynamics {H1,i}ni=1, {H2,i}ni=1 and the 4th order tensors {Ei}ni=1 of the objective tensor derivatives. In particular, by choosing g1(r)≡1, G∝H2,1 so we do not need to train G

separately. The loss function is defined by

are hyperparameters specified later. For each training batch of

m training samples, LH1, LH2, LE are given by

where ∥⋅∥2 denotes the total sum of squares of the entries in the tensor. V(i) is the matrix composed of the eigenvectors of c1=⟨rrT⟩ of the i−th sample.

layer fully-connected DNNs. The number of neurons in the hidden layers are set to be

, respectively. The activation function is taken to be the hyperbolic tangent.

The DNNs are trained by the Adam stochastic gradient descent method

Kingma and Ba (2015) for 400epochs, using 75 samples per batch size. The initial learning rate is 1.8×10−4 and decay rate is 0.8 per 9000 steps. The hyper-parameters λH1, λH2 and λE are chosen in the following two ways. In the first setup, we set them to be constant throughout the training process, e.g., λH1=λH2=λE=1/3. In the second setup, the hyper-parameters are updated every Nλ epochs by

where ˜L(⋅) denotes the mean of the loss during the past Nλ epochs. For the present study, both approaches achieve a loss L smaller than 1×10−4 and the root of relative loss less than 1.6×10−2. More sophisticated choices of λH1, λH2 and λE as well as other formulation of L will be investigated in future work.

We note that the size of the volume unit is chosen empirically in the continuum models of the flow systems considered in the present work. Our sensitivity studies show that the numerical results of the DeePN2 model agree well with the full MD when the average number of polymer within a unit volume is greater than 200. For all the cases, the computational cost of the DeePN2 model is less than 0.05% of the computational cost of the full MD simulations and less than 10 times the cost of empirical continuum models.