Salient object detection is a fundamental topic in computer vision. Previous methods based on RGB-D often suffer from the incompatibility of multi-modal feature fusion and the insufficiency of multi-scale feature aggregation. To tackle these two dilemmas, we propose a novel multi-modal and multi-scale refined network (M2RNet). Three essential components are presented in this network. The nested dual attention module (NDAM) explicitly exploits the combined features of RGB and depth flows. The adjacent interactive aggregation module (AIAM) gradually integrates the neighbor features of high, middle and low levels. The joint hybrid optimization loss (JHOL) makes the predictions have a prominent outline. Extensive experiments demonstrate that our method outperforms other state-of-the-art approaches. 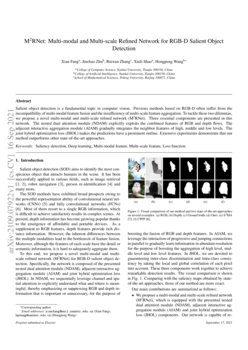 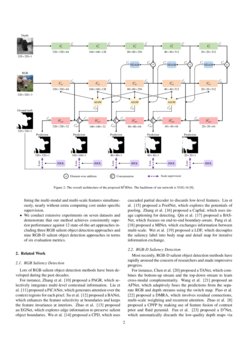 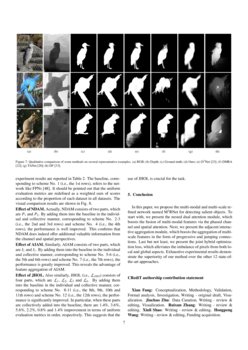 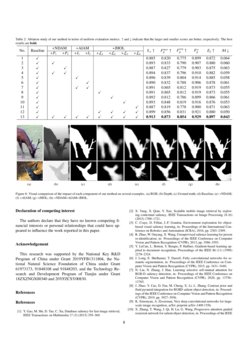 Salient object detection (SOD) aims to identify the most conspicuous object that attracts humans in the scene. It has been successfully applied in various fields, such as image retrieval

LeCun et al. (1998) and fully convolutional networks (FCNs) Long et al. (2015). Most of them resort to a single RGB information, which is difficult to achieve satisfactory results in complex scenes. At present, depth information has become growing popular thanks to the emergence of affordable and portable devices. As a supplement to RGB features, depth features provide rich distance information. However, the inherent differences between the multiple modalities lead to the bottleneck of feature fusion. Moreover, although the features of each scale have the detail or semantic information, it is hard to adequately aggregate them.

To this end, we propose a novel multi-modal and multi-scale refined network (M2RNet) for RGB-D salient object detection. Specifically, the network is composed of the presented nested dual attention module (NDAM), adjacent interactive aggregation module (AIAM) and joint hybrid optimization loss (JHOL). In NDAM, we sequentially leverage channel and spatial attention to explicitly understand what and where is meaningful, thereby emphasizing or suppressing RGB and depth information that is important or unnecessary, for the purpose of boosting the fusion of RGB and depth features. In AIAM, we leverage the interaction of progressive and jumping connections in parallel to gradually learn information in abundant resolution for the purpose of boosting the aggregation of high level, middle level and low level features. In JHOL, we are devoted to guaranteeing inter-class discrimination and intra-class consistency by taking the local and global correlation of each pixel into account. These three components work together to achieve remarkable detection results. The visual comparison is shown in Fig. 1. Comparing with the saliency maps obtained by state-of-the-art approaches, those of our method are more exact.

Lots of RGB salient object detection methods have been developed during the past decades.

proposed a BANet, which enhances the feature selectivity at boundaries and keeps the feature invariance at interiors. Zhao et al.

Most recently, RGB-D salient object detection methods have rapidly aroused the concern of researchers and made impressive progress.

The proposed multi-modal and multi-scale refined network (M2RNet) is an encoder-decoder architecture, covering nested dual attention module (NDAM), adjacent interactive aggregation module (AIAM) and joint hybrid optimization loss (JHOL), as shown in Fig. 2. To be concise, we denote the output features of RGB branch in the encoder as fid (i=1,2,3,4,5), the output features of depth branch in the encoder as firgb (i=1,2,3,4,5), and the output features in the decoder as firgbd (i=1,2,3,4,5). Let ficm (i=3,4,5) denote the combined features of RGB flow and depth flow, we utilize NDAM to strengthen their robustness to get the corresponding enhanced features ficm′ (i=3,4,5). For each group of three consecutive features {fi−1rgb, firgb, fi+1rgb} (i=2,3,4), we utilize AIAM to produce their aggregated features firgb′ (i=2,3,4). In order to facilitate the optimization, we embed JHOL as the auxiliary loss.

where Ci(⋅) and Si(⋅) (i=1,2) denote the channel attention and spatial attention, respectively. The nested attention is roughly divided into two phases of P1 and P2, as shown in Fig. 3.

In the first phase P1, given an intermediate feature ¯¯¯f∈RC×X, in which X=H×W, and C, H and W are the channel, height and width of the feature ¯¯¯f, respectively, the dual attentions C1(⋅) and S1(⋅) are defined as:

where (⋅)T denotes the transpose operation and δ(⋅) is the Softmax function. Note that the channel of the feature in Eq. (4) is set to 1/8 of the original channel of that for computation efficiency.

is the Sigmoid function,

Relying on this, we propose an adjacent interactive aggregation module (AIAM) to guide the interaction of multi-scale features. In this way, the neighbor features that are of intimate correlation are constantly complemented. The interaction behind the features of three triples {fi−1rgb, firgb, fi+1rgb} (i=2,3,4) helps the generation of desired resulting features {firgb′} (i=2,3,4). The procedure of different levels feature aggregation can be described as:

where I1 and I2 denote two kinds of feature interactions, as shown in Fig. 4

. The difference between them is that the interaction of the former is progressive, while that of the latter is jumping in the initial stage. After that, these relevant features repeatedly pass through some convolutional layers, batch normalization layers and ReLU layers, and finally are associated with a residual block.

Let P={p|0<p<1} and G={g|0<g<1} denote the prediction saliency map and ground truth saliency map, respectively. As the most classical loss function, binary cross entropy loss (BCEL), symbolized by LBCE, can be formulated as:

where H and W are the height and width of the image, respectively.

To reinforce the capability of supervision from both local and global aspects, we propose a joint hybrid optimization loss (JHOL), symbolized by LJHO, as an auxiliary loss function, which can be formulated as:

where λ1, λ2, λ3 and λ4 are the parameters to control the trade-off among the four terms of the loss. For the sake of simplicity, they are all set to 1. To be specific, L1, L2, L3 and L4 are defined as:

Therefore, the total loss LTotal can be written as:

where μ is the parameter to control the trade-off between LBCE and LJHO. In practice, it is also set to 1.

We implement our method based on the PyTorch toolbox with a single GeForce RTX 2080 Ti GPU. The VGG-16

Simonyan and Zisserman (2014) is adopted as the backbone. For each input image, it is simply resized to 320×320 and then fed into the network to obtain prediction without any other pre-processing (e.g., HHA Gupta et al. (2014)) or post-processing (e.g., CRF Krähenbühl and Koltun (2011)

). To avoid over-fitting, the techniques of flipping, cropping and rotation act as data augmentation. The stochastic gradient descent (SGD) optimizer is used with the batch size of 4, the momentum of 0.9 and the weight decay of 5e-4. The whole network is stopped after 30 epochs.

Quantitative Comparison. The quantitative comparison results are reported in Table 1. It can be seen that our method performs best in almost all cases. For an intuitive comparison, the PR curves and Fβ curves are shown in Fig. 5 and Fig. 6, respectively. Obviously, the curves generated by our method are closer to the top and straighter in a large range than others, which reflects its excellence and stability.

Qualitative Comparison. The qualitative comparison results as shown in Fig. 7. It can be observed that our method can handle a wide variety of challenging scenes, such as blurred foreground, cluttered background, low contrast and multiple objects. More specifically, our method yields clear foreground, clean background, complete structure and sharp boundary. These results prove that our method is able to utilize cross-modal complementary information, which can not only achieve the reinforcement from the reliable depth maps but also prevent the contamination from the unreliable depth maps.

A series of ablation studies are conducted to investigate the impact of each core component of our method. The ablation experiment results are reported in Table 2. The baseline, corresponding to scheme No. 1 (i.e., the 1st rows), refers to the network like FPNs Lin et al. (2017). It should be pointed out that the uniform evaluation metrics are redefined as a weighted sum of scores according to the proportion of each dataset in all datasets. The visual comparison results are shown in Fig. 8.

Effect of NDAM. Actually, NDAM consists of two parts, which are P1 and P2. By adding them into the baseline in the individual and collective manner, corresponding to scheme No. 2-3 (i.e., the 2nd and 3rd rows) and scheme No. 4 (i.e., the 4th rows), the performance is well improved. This confirms that NDAM does indeed offer additional valuable information from the channel and spatial perspectives.

Effect of AIAM. Similarly, AIAM consists of two parts, which are I1 and I1. By adding them into the baseline in the individual and collective manner, corresponding to scheme No. 5-6 (i.e., the 5th and 6th rows) and scheme No. 7 (i.e., the 7th rows), the performance is greatly improved. This reveals the advantage of feature aggregation of AIAM.

Effect of JHOL. Also similarly, JHOL (i.e., LJHO) consists of four parts, which are L1, L2, L3 and L4. By adding them into the baseline in the individual and collective manner, corresponding to scheme No. 8-11 (i.e., the 8th, 9th, 10th and 11th rows) and scheme No. 12 (i.e., the 12th rows), the performance is significantly improved. In particular, when these parts are collectively added into the baseline, there are 1.4%, 3.6%, 5.6%, 2.2%, 0.8% and 1.4% improvement in terms of uniform evaluation metrics in order, respectively. This suggests that the use of JHOL is crucial for the task.

In this paper, we propose the multi-modal and multi-scale refined network named M2RNet for detecting salient objects. To start with, we present the nested dual attention module, which boosts the fusion of multi-modal features via the phased channel and spatial attention. Next, we present the adjacent interactive aggregation module, which boosts the aggregation of multi-scale features in the form of progressive and jumping connections. Last but not least, we present the joint hybrid optimization loss, which alleviates the imbalance of pixels from both local and global aspects. Exhaustive experimental results demonstrate the superiority of our method over the other 12 state-of-the-art approaches.

The authors declare that they have no known competing financial interests or personal relationships that could have appeared to influence the work reported in this paper.