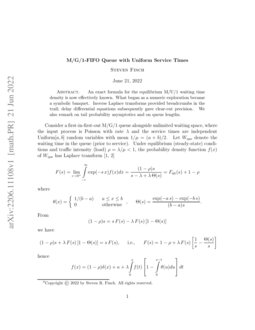 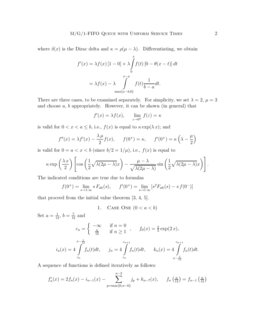 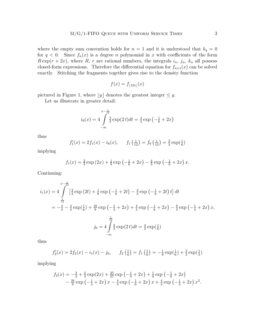 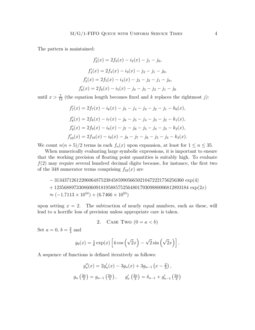 In multi-server queueing systems where there is no central queue holding...
Tuhinangshu Choudhury, et al. ∙

In this paper, we provide a novel and simple approach to study the super...
Quan-Lin Li, et al. ∙

A Neat Linked Queue with the Rear Sentinel

A modular version of the baskets queue of Hoffman, Shalev and Shavit is ...
Armando Castañeda, et al. ∙

where the empty sum convention holds for n=1 and it is understood that kq=0 for q<0.  Since fn(x) is a degree n polynomial in x with coefficients of the form Rexp(r+2x), where R, r are rational numbers, the integrals in, jn, kn all possess closed-form expressions.  Therefore the differential equation for fn+1(x) can be solved exactly.  Stitching the fragments together gives rise to the density function

pictured in Figure 1, where ⌊y⌋ denotes the greatest integer ≤y.

Let us illustrate in greater detail:

The pattern is maintained:

until x>712 (the equation length becomes fixed and k replaces the rightmost j):

When numerically evaluating large symbolic expressions, it is important to ensure that the working precision of floating point quantities is suitably high. To evaluate f(2) may require several hundred decimal digits because, for instance, the first two of the 348 numerator terms comprising f24(x) are

upon setting x=2.  The subtraction of nearly equal numbers, such as these, will lead to a horrific loss of precision unless appropriate care is taken.

where δm is the Kronecker delta.  Stitching the fragments together gives rise to

Let us illustrate in greater detail:

Beyond this point, the derivatives at x=2n3 match:

The role of δm

here is more pronounced than in Section 2: a jump discontinuity occurs in the density at

x=13 (as opposed to merely a sharp corner) .  Stitching the fragments together gives rise to

I taught a semester-long class in statistical programming at Harvard University (as a preceptor) for nearly ten years.  A favorite set of problems began with an M/M/1 example [10] involving a hospital emergency room (ER).

Patients (clients) arrive according to a Poisson process with rate λ.  One doctor (server) is available to treat them.  The doctor, when busy, treats patients with rate μ

.  The ER is open 24 hours a day, 7 days a week.  Patients must wait until the doctor is free and are treated in the order via which they arrive.  Simulate the performance of the ER over many weeks.  What can be said about waiting time in queue per patient (excluding service time)?  Determine the mean, variance, mode and median of

Putting aside experiment in favor of pristine theory, the Laplace transform of service density μexp(−μx) is μ/(μ+s).  Formulas for the mean and variance of Wque follow immediately from

giving 23 and 89 respectively.  An expression for the density of Wque:

shows that the mode is 0; integrating and solving the equation

The aforementioned problem set continued with an M/G/1 example, involving the same ER parameters, but with Uniform[a,b] treatment lengths.  Since 1/3=(a+b)/2 was required, I arbitrarily chose a=1/12 and b=7/12.

Perform exactly the same simulation as before, except assume treatment lengths (in minutes) are uniformly distributed on the interval

[5,35].  Less is known about this scenario than the preceding (with exponential service times).

did not occur to me until later.  I had imagined that numerical inversion of Laplace transforms was the only avenue available to reliably estimate the mode and median.

is the first moment of treatment lengths,

are the corresponding second and third moments.  Again, favoring pristine theory over experiment,

My classroom example deviates from the direction of research [13], which emphasizes heavy-tailed service time distributions.  Ramsay [14] discovered a remarkably compact formula – a single integral of a non-oscillating function over the real line – in connection with Pareto service times.  My formulas for uniform service times are sprawling by comparison.

The recursive solution of delay-differential equations is certainly not new [15] but application of such to queueing theory does not seem to be widespread.  Counterexamples include [16, 17]; surely there are more that I’ve missed.  Symbolics are mentioned in [13].

The waiting time probability for M/D/1 seems to decay exponentially (as do the other two cases).  The Cramér-Lundberg approximation [18] is applicable; alternatively, we have asymptotics [11, 19]

Returning finally to M/U/1, let Lsys denote the number of patients in the system (both queue and service).  Define

giving 3524 and 45471728 respectively.  The final term for the variance is missing in [21].  The probability generating function ~f(ℓ) seems to decay geometrically, but details surrounding the exact limit of successive ratios have not been verified [20].

I am grateful to innumerable software developers, as my “effective” formulas are too lengthy to be studied in any traditional sense.  Mathematica routines NDSolve for DDEs and InverseLaplaceTransform (for Mma version ≥12.2) plus ILTCME [22] assisted in numerically confirming many results.  R steadfastly remains my favorite statistical programming language.  A student asked in 2006 for my help in writing a relevant R simulation, leading to the computational exercises described here and to my abiding interest in queues.