We consider a class of M-estimators of the parameters of the GARCH models which are asymptotically normal under mild assumptions on the moments of the underlying error distribution. Since heavy-tailed error distributions without higher order moments are common in the GARCH modeling of many real financial data, it becomes worthwhile to use such estimators for the time series inference instead of the quasi maximum likelihood estimator. We discuss the weighted bootstrap approximations of the distributions of M-estimators. Through extensive simulations and data analysis, we demonstrate the robustness of the M-estimators under heavy-tailed error distributions and the accuracy of the bootstrap approximation. In addition to the GARCH (1, 1) model, we obtain extensive computation and simulation results which are useful in the context of higher order models such as GARCH (2, 1) and GARCH (1, 2) but have not yet received sufficient attention in the literature. Finally, we use M-estimators for the analysis of three real financial time series fitted with GARCH (1, 1) or GARCH (2, 1) models. 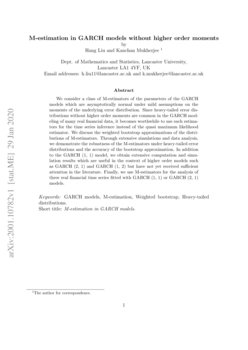 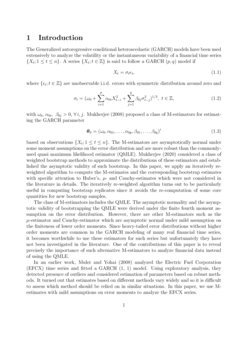 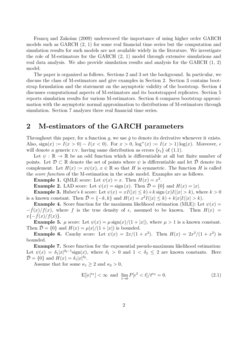 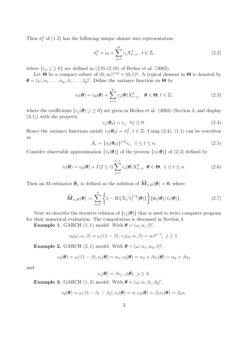 where {ϵt;t∈Z} are unobservable i.i.d. errors with symmetric distribution around zero and

with ω0, α0i,β0j>0, ∀i,j. Mukherjee (2008) proposed a class of M-estimators for estimating the GARCH parameter

based on observations {Xt;1≤t≤n}. The M-estimators are asymptotically normal under some moment assumptions on the error distribution and are more robust than the commonly-used quasi maximum likelihood estimator (QMLE). Mukherjee (2020) considered a class of weighted bootstrap methods to approximate the distributions of these estimators and established the asymptotic validity of such bootstrap. In this paper, we apply an iteratively re-weighted algorithm to compute the M-estimates and the corresponding bootstrap estimates with specific attention to Huber’s, μ- and Cauchy-estimates which were not considered in the literature in details. The iteratively re-weighted algorithm turns out to be particularly useful in computing bootstrap replicates since it avoids the re-computation of some core quantities for new bootstrap samples.

The class of M-estimators includes the QMLE. The asymptotic normality and the asymptotic validity of bootstrapping the QMLE were derived under the finite fourth moment assumption on the error distribution. However, there are other M-estimators such as the μ-estimator and Cauchy-estimator which are asymptotic normal under mild assumption on the finiteness of lower order moments. Since heavy-tailed error distributions without higher order moments are common in the GARCH modeling of many real financial time series, it becomes worthwhile to use these estimators for such series but unfortunately they have not been investigated in the literature. One of the contributions of this paper is to reveal precisely the importance of such alternative M-estimators to analyze financial data instead of using the QMLE.

In an earlier work, Muler and Yohai (2008) analyzed the Electric Fuel Corporation (EFCX) time series and fitted a GARCH (1, 1) model. Using exploratory analysis, they detected presence of outliers and considered estimation of parameters based on robust methods. It turned out that estimates based on different methods vary widely and so it is difficult to assess which method should be relied on in similar situations. In this paper, we use M-estimates with mild assumptions on error moments to analyze the EFCX series.

Francq and Zakoïan (2009) underscored the importance of using higher order GARCH models such as GARCH (2, 1) for some real financial time series but the computation and simulation results for such models are not available widely in the literature. We investigate the role of M-estimators for the GARCH (2, 1) model through extensive simulations and real data analysis. We also provide simulation results and analysis for the GARCH (1, 2) model.

2 M-estimators of the GARCH parameters

be an odd function which is differentiable at all but finite number of points. Let

D⊂R denote the set of points where ψ is differentiable and let ¯D denote its complement. Let H(x):=xψ(x), x∈R so that H is symmetric. The function H is called the score function of the M-estimation in the scale model. Examples are as follows.

Then σ2t of (1.2) has the following unique almost sure representation:

. Define the variance function on

Next we describe the iterative relation of {cj(\boldmathθ)} that is used to write computer program for their numerical evaluation. The computation is discussed in Section 4.

The asymptotic distribution of ^\boldmathθn is derived under the following assumptions.

Conditions on the score function:

Also various Smoothness conditions on H as in Mukherjee (2008) are assumed which are satisfied in all examples of H considered above. Define the score function factor

and the transformed parameter

Note that cH used in above formulas are given by (i) cH=E(ϵ2) for the QMLE, (ii) cH=(E|ϵ|)2 for the LAD while for the Huber, μ-estimator, Cauchy and other scores, cH does not have closed-form expression. For such score functions, cH is calculated using (2.8) as follows. We fix a large positive integer I and generate {ϵi;1≤i≤I} from the error distribution considered for the simulation. Then, using the bisection method on c>0, we solve the equation

Values of cH computed in this way were provided in Mukherjee (2008, page 1541) for some error distributions and score functions. In Table 1 we provide cH for few more error distributions and score functions such as Huber’s k-score and μ-estimator with k=1.5 and μ=3 which are used in simulations and data analysis of later sections. In the sequel, Double exponential is abbreviated as DE.

Based on these weights, bootstrap estimate ^\boldmathθ∗n is defined as the solution of ˆ\boldmathM∗n,H(\boldmathθ)=% \boldmath0, where

Examples. From many different choices of bootstrap weights, we consider the following three schemes for comparison.

(i) Scheme M. The sequence of weights {wn1,…,wnn} has a multinomial (n,1/n,…,1/n) distribution, which is essentially the classical paired bootstrap.

(ii) Scheme E. When wnt=(nEt)/∑ni=1Ei, where {Et} are i.i.d. exponential r.v. with mean 1. Under scheme E, ^\boldmathθ∗n is a weighted M-estimator with weights proportional to Et, 1≤i≤n.

A host of other bootstrap methods in the literature are special cases of the above bootstrap formulation. Such general formulation of weighted bootstrap offers a unified way of studying several bootstrap schemes simultaneously. See, for example, Chatterjee and Bose (2005) for details in other contexts.

We assume that the weights satisfy the following basic conditions (Conditions BW of Chatterjee and Bose (2005)) where σ2n=Var(wni) and k3>0 is a constant.

Under (3.2) and some additional smoothness and moment conditions in Mukherjee (2020), weighted bootstrap is asymptotic valid.

, the rate of convergence of the bootstrap estimator is the same as that of the original estimator. The standard deviation of the weights

{σn} at the denominator of the scaling reflects the contribution of the corresponding weights.

The distributional result of (3.3

) is useful for constructing the confidence interval of the GARCH parameters as follows. Let

-th quantile of the numbers

. Consequently, the bootstrap coverage probability is computed by the proportion of the above set of

In the following Section 6, we will compare the accuracy of the confidence intervals constructed by the bootstrap and asymptotic approximations.

We discuss the implementation of an iteratively re-weighted algorithm proposed in Mukherjee (2020) for computing M-estimates. In particular, we highlight μ-estimate and Cauchy-estimate of the GARCH parameters in this paper as their asymptotic distributions are derived under mild moment assumptions. We also consider the bootstrap estimators based on the corresponding score functions.

For the convenience of writing, let α(c)=E[H(cϵ)] for c>0. Using a Taylor expansion of ˆ\boldmathMn,H, we obtain the following recursive equation for computing the updated estimate ~\boldmathθ of ^\boldmathθn from the current estimate θ of ˆ\boldmathMn,H(\boldmathθ)=\boldmath% 0:

where ˙α(1)=E{ϵ˙H(ϵ)} under smoothness conditions on H. Since the GARCH residuals {Xt/^v1/2t(^\boldmathθn)} estimate only {ϵt/c1/2H}, in general, we cannot estimate ˙α(1) from the data. Therefore, we use ad hoc techniques such as simulating {~ϵt;1≤t≤n} from N(0,1) or standardized DE distribution and then use n−1∑nt=1~ϵ˙H(~ϵ) to carry out the iteration. Note that if the iteration in (4.1) converges then ~\boldmathθ≈\boldmathθ. Therefore in this case from (4.1), ˆ\boldmathMn,H(\boldmathθ)≈% \boldmath0 and hence ~\boldmathθ is the desired ^\boldmathθn. Based on our extensive simulation study and real data analysis, the algorithm is robust enough to converge to the same value of ^\boldmathθn irrespective of different values of the unknown factor ˙α(1) used in computation.

In the following examples, we discuss (4.1) when specialized to the M-estimators computed in this paper.

Note that when E(ϵ2)=1, this is same as the formula obtained through the BHHH algorithm proposed by Berndt et al. (1974).

Here the relevant function is ˆ\boldmathM∗n,H(\boldmathθ) defined in (3.1) and the bootstrap estimate ^\boldmathθ∗n can be computed using the updating equation