The recent development of light-weighted neural networks has promoted the applications of deep learning under resource constraints and mobile applications. Many of these applications need to perform a real-time and efficient prediction for semantic segmentation with a light-weighted network. This paper introduces a light-weighted network with an efficient reduced non-local module (LRNNet) for efficient and realtime semantic segmentation. We proposed a factorized convolutional block in ResNet-Style encoder to achieve more lightweighted, efficient and powerful feature extraction. Meanwhile, our proposed reduced non-local module utilizes spatial regional dominant singular vectors to achieve reduced and more representative non-local feature integration with much lower computation and memory cost. Experiments demonstrate our superior trade-off among light-weight, speed, computation and accuracy. Without additional processing and pretraining, LRNNet achieves 72.2 mIoU on Cityscapes test dataset only using the fine annotation data for training with only 0.68M parameters and with 71 FPS on a GTX 1080Ti card. 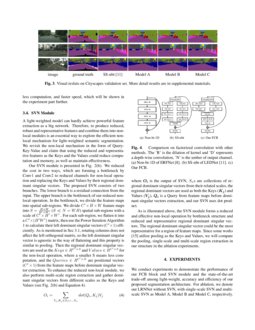 Semantic segmentation can be viewed as a task of pixel-wise classification, which assigns a specific pre-defined category to each pixel in an image. The task has many potential applications in autonomous driving or image editing and so on. Although many works [11, 6, 9] have made great progress in the accuracy of image semantic segmentation tasks, their network size, inference speed, computation and memory cost limit their practical applications. Therefore, it’s essential to develop the light-weighted, efficient and real-time methods for semantic segmentation.

Among these properties, light-weight could be the most essential one, because using a smaller scale network can lead to faster speed and more efficient in computation or memory cost easier. A less learnable network parameter means that the network has less redundancy and network structure makes its parameters more effective. Practically, a smaller model size is more favorable for cellphone apps. Designing blocks with proper factorized convolution to construct an effective light-weighted network could be a more scalable way and could be easier to balance among accuracy, network size, speed, and efficiency. In this way, many works [12, 19, 15, 17, 10] achieve promising results and show their potential for many potential applications. But those works [15, 17] do not balance factorized convolution and long-range features in a proper way.

[6]. However, modeling relationships between every position could be rather heavy in computation and memory cost. Some works try to develop factorized [9] or reduced [22]

non-local methods to make it more efficient. Since efficient non-local or positional attention is not developed enough for light-weighted and efficient semantic segmentation, our approach tries to develop a powerful reduced non-local method to model long-range dependencies and global feature selection efficiently.

In our work, we develop a light-weighted factorized convolution block (FCB) (Fig. 4) to build a feature extraction network (encoder), which deals with long-range and short-range features with proper factorized convolution respectively, and we proposed a powerful reduced non-local module with regional singular vectors to model long-range dependencies and global feature selection for the features from encoder to enhance the segmentation results. Contributions are summarized as follows:

Before introducing the proposed method, we first introduce the singular value decomposition and non-local method, which are related to our SVN module in section 3.4.

Non-local Module. Non-local module [16] models global feature relationships. We illustrate it in the form of Query-Key-Value. It can be formulated as:

where qi∈Q,kj∈K,vj∈V, qi∈RC1 is a Query, Oi is the corresponding output of qi, kj∈RC1, is a Key, vi∈RC2, is a Value, Sim(⋅,⋅) is the measure of similarity between ki and qi, and C(x) is a normalization function, Q∈RC1×N1, K∈RC1×N2 and V∈RC2×N2 are the collections of the Queries, the Keys and the Values, respectively. And a smaller N2 means less computation.

3.2 Overview of the Network Architecture

In this section, we introduce our network architecture. Our LRNNet consists of a feature extraction network constructed by our proposed factorized convolution block (Fig. 4(c)) and a pixel classifier enhanced by our SVN module (Fig. 2).

We form our encoder in a three-stages ResNet-style ( Fig. 2(a)). We adopt the same transition between stages as ENet [12] using a downsampling unit. The core components are our FCB units, which provide light-weighted and efficient feature extraction. For better comparison of other light-weight factorized convolution block, we adopt the same dilation series of FCB in encoder as LEDNet [17] after the last downsampling unit (details in supplemental material). Our decoder ( Fig. 2(b)) is a pixel-wise classifier enhanced by our SVN module.

convolution kernel, which could have the same receptive field and fewer parameters. However, neglecting the information lost of crossing the activate function between the two 1D convolution kernel, it could be a rank-1 approximation for the

Therefore, the convolution kernel with large dilation will receive complex or spatially informative long-range features (features separated with a large dilation) in space, and it needs more parameters in space. Meanwhile, a convolution kernel with small dilation will receive simple or less informative short-range features in space, and fewer parameters in space are enough. Our FCB (Fig. 4(c)

) first deals with short-range and spatially less informative features with 1D factorized convolution in two split groups, which is fully connected in channel, so the factorized convolution reduces the parameter and computation a lot. To enlarge the receptive field, our FCB utilizes 2D kernel with larger dilation and use depthwise separable convolution to reduce the parameter and computation. A channel shuffle operation is set at last because there is a residual connection after the point-wise convolution. In total, FCB uses a low-rank approximation (1D kernel) in space for short-range features and depth-wise spatial 2D dilated kernel for long-range features, which lead to more light-weight, efficient and powerful feature extraction.

Compared with other factorized convolution blocks (Fig. 4), our FCB has a more elaborate design, fewer parameters, less computation, and faster speed, which will be shown in the experiment part further.

A light-weighted model can hardly achieve powerful feature extraction as a big network. Therefore, to produce reduced, robust and representative features and combine them into non-local modules is an essential way to explore the efficient non-local mechanism for light-weighted semantic segmentation. We revisit the non-local mechanism in the form of Query-Key-Value and claim that using the reduced and representative features as the Keys and the Values could reduce computation and memory, as well as maintain effectiveness.

Our SVN module is presented in Fig. 2(b). We reduced the cost in two ways, which are forming a bottleneck by Conv1 and Conv2 to reduced channels for non-local operation and replacing the Keys and Values by their regional dominant singular vectors. The proposed SVN consists of two branches. The lower branch is a residual connection from the input. The upper branch is the bottleneck of our reduced non-local operation. In the bottleneck, we divide the feature maps into spatial sub-regions. We divide C′×H×W feature maps into S=H×WH′×W′ (S≪N=WH) spatial sub-regions with a scale of C′×H′×W′ . For each sub-region, we flatten it into a C′×(H′W′) matrix, then use the Power Iteration Algorithm 1 to calculate their left dominant singular vectors (C′×1

Keys∈RC′×S and Values∈RC′×S for the non-local operation, where a smaller S means less computation, and the Queries∈RC′×N are positional vectors (C′×1) from the feature maps before dominant singular vector extraction. To enhance the reduced non-local module, we also perform multi-scale region extraction and gather dominant singular vectors from different scales as the Keys and Values (see Fig. 2(b) and Equation 4).

As is illustrated above, the SVN module forms a reduced and effective non-local operation by bottleneck structure and reduced and representative regional dominant singular vectors. The regional dominant singular vector could be the most representative for a region of feature maps. Since some works [22] utilize pooling as the Keys and Values, we will compare the pooling, single-scale and multi-scale region extraction in our structure in the ablation experiments.

We conduct experiments to demonstrate the performance of our FCB block and SVN module and the state-of-the-art trade-off among light-weight, accuracy and efficiency of our proposed segmentation architecture. For ablation, we denote our LRNNet without SVN, with single-scale SVN and multi-scale SVN as Model A, Model B and Model C, respectively.

We implement all our methods using Pytorch [13] on a single GTX 1080Ti. Following [3], we employ a poly learning rate policy and the base learning rate is 0.01. The batch size is set to 8 for all training. For CamVid testing and evaluation on Cityscapes validation set, we take 250k iterations for training to study our network quickly. And we only train our model on fine annotations for Cityscapes test set with 520K iterations.

Table 2 shows the performances of different sub-region choices of our SVN module and the standard non-local. Balancing accuracy, speed and computation cost, we choose 64 (8×8) sub-region as single-scale SVN (Model B) and 8×8+4×4 sub-regions for multi-scale SVN (Model C).

We compare using regional dominant singular vectors (Model B) with using pooling features in single scale (8×8) (Table 1) to show the effectiveness of dominant singular vectors. Results on Cityscapes validation are shown in Table 1. Comparison of Model single-scale SVN (Model B) and pooling (max or average) shows that regional singular vectors are effective for our network with a light-weighted encoder with 0.5 mIoU improvement and additional 0.09 GFLOPS, while using pooling can not provide representative features for a light-weighted network. And the multi-scale SVN (Model C) further improves the result to 71.4% mIoU with a little cost on inference time and computation.

4.4 Comparison with Other Methods

We compare our LRNNet with other light-weighted methods on Cityscapes and Camvid test sets in terms of parameter size, accuracy, speed and computation. We only report the speed of methods on the open-source deep-learning framework, such as Pytorch, TensorFlow and Caffe, because they have comparable implemented performance, but have a large gap comparing with the non open-source deep-learning framework of those works

[10, 19] and details are in supplemental material. Results are shown in Table 3 and 4. ”-” indicates that the speed is not achieved by open-source deep learning frameworks or not provided. Our network constructed by FCB (Model A) achieves 70.6% mIoU and 76.5 FPS on Cityscapes test set with only 0.67M parameters and 8.48 GFLOPS, which is more light-weighted and efficient than ERFNet [15] and LEDNet [17] with better accuracy. With single-scale (Model B) and multi-scale SVN (Model C), LRNNet achieves 71.6% and 72.2% mIoU on Cityscapes test set with a little cost on speed and efficiency, respectively. Our LRNNet with multi-scale SVN achieves 69.2% mIoU with only 0.68M parameters on CamVid test set. All results show the state-of-the-art trade-off among parameter size, speed, computation and accuracy of our LRNNet. Visual comparison can be viewed in Fig. 1.

We have proposed LRNNet for real-time semantic segmentation. The proposed FCB unit explores a proper form of factorized convolution block to deal with short-range and long-range features, which provides light-weighted, efficient and powerful feature extraction for the encoder of our LRNNet. Our SVN module utilizes regional dominant singular vectors to construct the efficient reduced non-local operation, which enhances the decoder with a very low cost. Extensive experimental results have validated our state-of-the-art trade-off in terms of parameter size, speed, computation and accuracy.