LRA: an accelerated rough set framework based on local redundancy of attribute for feature selection

In this paper, we propose and prove the theorem regarding the stability of attributes in a decision system. Based on the theorem, we propose the LRA framework for accelerating rough set algorithms. It is a general-purpose framework which can be applied to almost all rough set methods significantly . Theoretical analysis guarantees high efficiency. Note that the enhancement of efficiency will not lead to any decrease of the classification accuracy. Besides, we provide a simpler prove for the positive approximation acceleration framework. 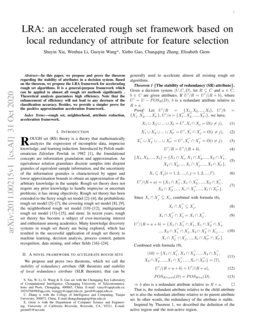 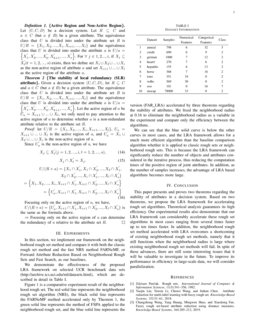 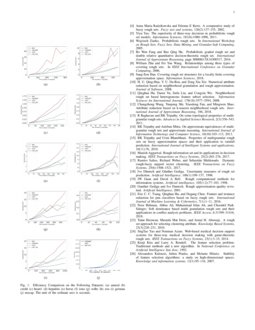 An Efficient and Accurate Rough Set for Feature Selection, Classification and Knowledge Representation

Extension of Rough Set Based on Positive Transitive Relation

Attribute reduction is one of the most important topics in rough set the...
Xi'ao Ma, et al. ∙

, and more. In recent years, rough set theory has become a subject of ever-increasing interest and enthusiasm among academics. Many knowledge discovery systems in rough set theory are being explored, which has resulted in the successful application of rough set theory to machine learning, decision analysis, process control, pattern recognition, data mining, and other fields

Since Xi∩X′′j⊆Xi, combined with formula (6),

⇒ b also is a redundant attribute relative to R+a.∎

Inspired by Theorem 1, we described the definition of the active region and the non-active region.

Since U′a is the non-active region of a, we have

Focusing only on the active region of a, we have,

⇒ Focusing only on the active region of a can determine the redundancy of a relative to the attribute set R.∎

We demonstrate the effectiveness of the proposed LRA framework on selected UCR benchmark data sets (http://archive.ics.uci.edu/ml/datasets.html), which are described in detail in Table I.

We can see that the blue solid curve is below the other curves in most cases, and the LRA framework allows for a much more efficient algorithm than the baseline comparison algorithm whether it is applied to classic rough sets or neighborhood rough sets. This is because the LRA framework can significantly reduce the number of objects and attributes considered in the iterative process, thus reducing the computation times of the positive region of joint attributes. In addition, as the number of samples increases, the advantage of LRA based algorithms becomes more large.

This paper presents and proves two theorems regarding the stability of attributes in a decision system. Based on two theorems, we propose the LRA framework for accelerating rough set algorithms. Theoretical analysis guarantees its high efficiency. Our experimental results also demonstrate that our LRA framework can considerably accelerate these rough set algorithms in most cases ranging from several times faster up to ten times faster. In addition, the neighborhood rough set method accelerated with LRA overcomes a shortcoming of existing neighborhood rough set methods, namely that it still functions when the neighborhood radius is large where existing neighborhood rough set methods will fail. In spite of these advances, there are still some interesting issues that it will be valuable to investigate in the future. To improve its performance in efficiency in large-scale data, we will consider parallelization.