We use results from communication complexity, both new and old ones, to prove lower bounds for problems on unambiguous finite automata (UFAs). We show: (1) Complementing UFAs with n states requires in general at least n^Ω̃(log n) states, improving on a bound by Raskin. (2) There are languages L_n such that both L_n and its complement are recognized by NFAs with n states but any UFA that recognizes L_n requires n^Ω(log n) states, refuting a conjecture by Colcombet on separation. 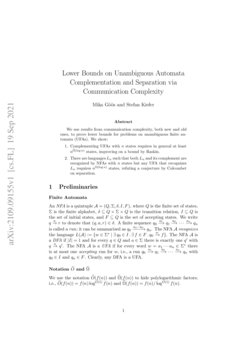 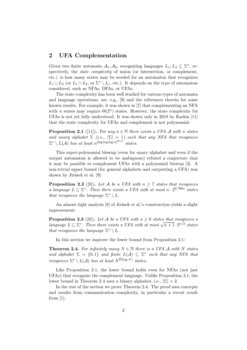 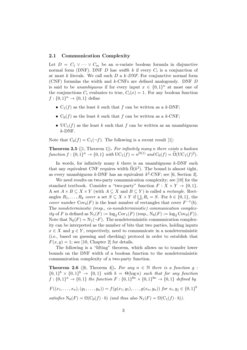 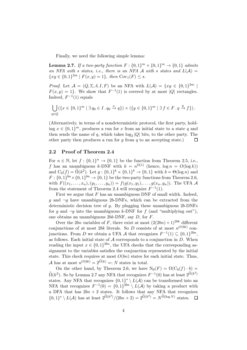 Given two finite automata A1,A2, recognizing languages L1,L2⊆Σ∗, respectively, the state complexity of union (or intersection, or complement, etc.) is how many states may be needed for an automaton that recognizes L1∪L2 (or L1∩L2, or Σ∗∖L1, etc.). It depends on the type of automaton considered, such as NFAs, DFAs, or UFAs.

For any n∈N there exists a UFA A with n states and unary alphabet Σ (i.e., |Σ|=1) such that any NFA that recognizes Σ∗∖L(A) has at least n(logloglogn)Ω(1) states.

This super-polynomial blowup (even for unary alphabet and even if the output automaton is allowed to be ambiguous) refuted a conjecture that it may be possible to complement UFAs with a polynomial blowup [3]. A non-trivial upper bound (for general alphabets and outputting a UFA) was shown by Jirásek et al. [9]:

In this section we improve the lower bound from Proposition 2.1:

For infinitely many N∈N there is a UFA A with N states and alphabet Σ={0,1} and finite L(A)⊆Σ∗ such that any NFA that recognizes Σ∗∖L(A) has at least N˜Ω(logN) states.

In the rest of the section we prove Theorem 2.4. The proof uses concepts and results from communication complexity, in particular a recent result from [1].

Let D=C1∨⋯∨Cm be an n-variate boolean formula in disjunctive normal form (DNF). DNF D has width k if every Ci is a conjunction of at most k literals. We call such D a k-DNF. For conjunctive normal form (CNF) formulas the width and k-CNFs are defined analogously. DNF D is said to be unambiguous if for every input x∈{0,1}n at most one of the conjunctions Ci evaluates to true, Ci(x)=1. For any boolean function f:{0,1}n→{0,1} define

The following is a “lifting” theorem, which allows us to transfer lower bounds on the DNF width of a boolean function to the nondeterministic communication complexity of a two-party function.

First we argue that F has an unambiguous DNF of small width. Indeed, g and ¬g have unambiguous 2b

-DNFs, which can be extracted from the deterministic decision tree of

Over the 2bn variables of F, there exist at most (2(2bn)+1)2bk different conjunctions of at most 2bk literals. So D consists of at most nO(bk) conjunctions. From D we obtain a UFA A that recognizes F−1(1)⊆{0,1}2bn, as follows. Each initial state of A corresponds to a conjunction in D. When reading the input x∈{0,1}2bn, the UFA checks that the corresponding assignment to the variables satisfies the conjunction represented by the initial state. This check requires at most O(bn) states for each initial state. Thus, A has at most nO(bk)=2˜O(k)=:N states in total.

3 Separation of Regular Languages by UFAs

In [3, Conjecture 2], Colcombet conjectured that for any NFAs A1,A2 with L(A1)∩L(A2)=∅ there is a polynomial-sized UFA A with L(A1)⊆L(A) and L(A)∩L(A2)=∅. Related separability questions are classical in formal language theory and have attracted renewed attention; see, e.g, [5] and the references therein. Separating automata have also been used recently to elegantly describe quasi-polynomial time algorithms for solving parity games in an automata theoretic framework; see [2, Chapter 3] and [4].

In this section we refute the above-mentioned conjecture by Colcombet, even when L(A2)=Σ∗∖L(A1):

Loosely speaking, in our construction, NFAs A1,A2 recognize (sparse) set disjointness and its complement. For n∈N write [n]:={1,…,n} and define for k≤n

Define also ⟨\textscDisjnk⟩:={⟨S⟩⟨T⟩∣(S,T)∈\textscDisjnk} where ⟨S⟩∈Σn={0,1}n is such that the ith letter of ⟨S⟩ is 1 if and only if i∈S, and similarly for ⟨T⟩. Note that ⟨S⟩,⟨T⟩ each contain k times the letter 1. To prove Theorem 3.1 it suffices to prove the following lemma.

In the rest of the section we prove Lemma 3.2. We use known results from communication complexity to show that any UFA for ⟨\textscDisjnk⟩ needs super-polynomially many states. We will give a self-contained proof of the existence of polynomial-sized NFAs for ⟨\textscDisjnk⟩ and its complement, but the main argument also comes from communication complexity, as we remark below at the end of the section.

The following lemma and its proof are analogous to Lemma 2.7.

and the rectangles do not overlap, as A is unambiguous. ∎

It is easy to see that there is an NFA, A2, with nO(1) states and L(A2)=Σ∗∖⟨\textscDisjnk⟩. Indeed, we can assume that the input is of the form ⟨S⟩⟨T⟩; otherwise A2 accepts. NFA A2 guesses i∈[n] such that i∈S∩T and then checks it.

Finally, we show that there is an NFA, A1, with nO(1) states and L(A1)=⟨\textscDisjnk⟩. We can assume that the input is of the form ⟨S⟩⟨T⟩; otherwise A1 rejects. NFA A1 “hard-codes” polynomially many sets Z1,…,Zℓ⊆[n]. It guesses i∈[ℓ] such that S⊆Zi and Zi∩T=∅ and then checks it. It remains to show that there exist ℓ=nO(1) sets Z1,…,Zℓ⊆[n] such that for any (S,T)∈\textscDisjnk there is i∈[ℓ] with S⊆Zi and Zi∩T=∅. The argument uses the probabilistic method and is due to [12]; see also [10, Example 2.12]. We reproduce it here due to its elegance and brevity.

In the main results, Theorems 3.1 and 2.4, we have obtained super-polynomial but quasi-polynomial lower bounds on UFA complementation and separation. These bounds are not known to be tight; indeed, in both cases the best known upper bound is exponential. At the same time, we have transferred techniques from communication complexity relatively directly. More concretely, both main theorems hinge on a finite language {xy∣F(x,y)=1} where F is a two-party function whose communication complexity is in a sense extreme. This suggests two kinds of opportunities for future work: