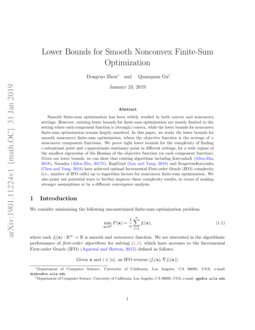 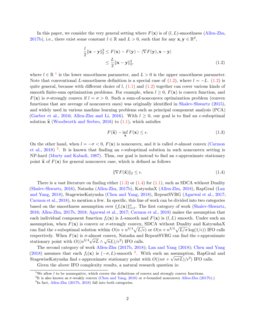 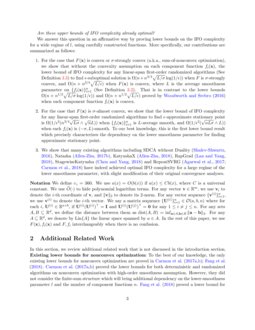 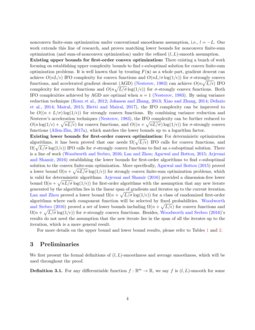 where each fi(\xb):\RRm→\RR is smooth and nonconvex function. We are interested in the algorithmic performance of first-order algorithms for solving (1), which have accesses to the Incremental First-order Oracle (IFO) (Agarwal and Bottou, 2015) defined as follows:

where l∈\RR 111We allow l to be nonnegative, which covers the definitions of convex and strongly convex functions. is the lower smoothness parameter, and L>0 is the upper smoothness parameter. Note that conventional L-smoothness definition is a special case of (1), where l=−L. (1) is quite general, because with different choice of l, (1) and (1) together can cover various kinds of smooth finite-sum optimization problems. For example, when l≥0, F(\xb) is convex function, and F(\xb) is σ-strongly convex if l=σ>0. Such a sum-of-nonconvex optimization problem (convex functions that are average of nonconvex ones) was originally identified in Shalev-Shwartz (2015)

On the other hand, when l=−σ<0, F(\xb) is nonconvex, and it is called σ-almost convex (Carmon et al., 2018) 222It is also known as σ-weakly convex (Chen and Yang, 2018) or σ-bounded nonconvex Allen-Zhu (2017b).). It is known that finding an ϵ-suboptimal solution in such nonconvex setting is NP-hard (Murty and Kabadi, 1987). Thus, our goal is instead to find an ϵ-approximate stationary point ^\xb of F(\xb) for general nonconvex case, which is defined as follows

Given the above IFO complexity results, a natural research question is:

Are these upper bounds of IFO complexity already optimal?

We answer this question in an affirmative way by proving lower bounds on the IFO complexity for a wide regime of l, using carefully constructed functions. More specifically, our contributions are summarized as follows:

In this section, we review additional related work that is not discussed in the introduction section.

Existing lower bounds for first-order convex optimization: For deterministic optimization algorithms, it has been proved that one needs Ω(√L/ϵ) IFO calls for convex functions, and Ω(√L/σlog(1/ϵ)) IFO calls for σ-strongly convex functions to find an ϵ-suboptimal solution. There is a line of work (Woodworth and Srebro, 2016; Lan and Zhou, ; Agarwal and Bottou, 2015; Arjevani and Shamir, 2016) establishing the lower bounds for first-order algorithms to find ϵ-suboptimal solution to the convex finite-sum optimization. More specifically, Agarwal and Bottou (2015) proved a lower bound Ω(n+√nL/σlog(1/ϵ)) for strongly convex finite-sum optimization problems, which is valid for deterministic algorithms. Arjevani and Shamir (2016) provided a dimension-free lower bound Ω(n+√nL/σlog(1/ϵ)) for first-order algorithms with the assumption that any new iterate generated by the algorithm lies in the linear span of gradients and iterates up to the current iteration. Lan and Zhou proved a lower bound Ω(n+√L/σlog(1/ϵ))

for a class of randomized first-order algorithms where each component function will be selected by fixed probabilities.

For more details on the upper bound and lower bound results, please refer to Tables 1 and 2.

We first present the formal definitions of (l,L)-smoothness and average smoothness, which will be used throughout the proof. For any differentiable function f:\RRm→\RR, we say f is (l,L)-smooth for some l∈\RR and L∈\RR+ if for any \xb,\yb∈\RRm, it holds that

for any random variable

In this work, we focus on the linear-span randomized first-order algorithm, which is defined as follows:

Given an initial point \xb(0), a linear-span randomized first-order algorithm \cA is defined as a measurable mapping from functions {fi}ni=1 to an infinite sequence of point and index pairs {(\xb(t),it)}∞t=0 with random variable it∈[n], which satisfies

In this work, we prove the lower bounds by constructing adversarial functions which are “hard enough” for any linear-span randomized first-order algorithms. To demonstrate the construction of adversarial functions, we first introduce the following quadratic function class, which comes from Nesterov (2013). Let Q(\xb;ξ,m,ζ):\RRm→\RR be:

In short, the first property of Q(\xb;ξ,m,ζ) says that Q is a convex function with 4

-smoothness, and the second property says that for any orthogonal matrix

\Ub, the composite function Q(\Ub\xb;ξ,m,ζ)+∑mi=1μ(\xb⊤\ub(i)) enjoys the so-called zero-chain property (Carmon et al., 2017a): if the current point is ¯\xb, then the information brought by an IFO call at the current point can at most increase the dimension of lienar space which ¯\xb belongs to by 1, which is very important for the proof of lower bounds.

Based on Definition 3, one can define the following three function classes: f\cNsc, f\cNc from Nesterov (2013) and f\cC from Carmon et al. (2017b). We first introduce a class of strongly convex functions f\cNsc, which is originally defined in Nesterov (2013). (Nesterov, 2013) Let f\cNsc(\xb;α,m):\RRm→\RR be

IFO calls. Our lower bounds (7) and (8) are tight, because they have been achieved by SDCA without Duality (Shalev-Shwartz, 2016) for l=σ and KatyushaX (Allen-Zhu, 2018) for l=σ and l=0 up to a logarithm factor. It is interesting to compare (7) and (8) with the corresponding lower bounds for convex finite-sum optimization in Woodworth and Srebro (2016), which proves ~Ω(n+√nL/σ) lower bound for strongly convex functions and Ω(n+√nL/ϵ) for convex functions. The dependence on n is n3/4 in the nonconvex case when ϵ≪1, as opposed to n1/2 in the (strongly) convex case. This suggests a fundamental gap. This gap has been observed firstly by Shalev-Shwartz (2016) from view of the upper bounds. Our lower bound results suggest that such a gap cannot be removed.

Next we show lower bounds under a slightly stronger assumption that each fi∈\cS(−σ,L). Our result shows that with such a stronger assumption, the optimal dependency on n will be smaller. For any linear-span randomized first-order algorithm \cA and any L,n,Δ,ϵ which satisfies that ϵ2≤(ΔLn−1∧Δσ)/103, there exist a dimension d=O(Δ/ϵ2⋅(√nσL∧L)) and functions {fi}ni=1:\RRd→\RR which satisfy that each fi∈\cS(−σ,L) and F(\xb(0))−inf\xb∈\RRdF(\xb)≤Δ. In order to find ^\xb∈\RRd such that \EE∥∇F(^\xb)∥2≤ϵ, \cA needs at least

4.3 Discussion on the Average Smoothness Assumption

To verify this, we need to rethink about the role that the assumption fi∈\cS(−L,L) for each i∈[n] plays in the convergence analyses for those algorithms. In detail, in the convergence analyses of those nonconvex finite-sum optimization algorithms including SDCA without Duality (Shalev-Shwartz, 2016), Natasha (Allen-Zhu, 2017b), KatyushaX (Allen-Zhu, 2018), one needs the assumption that fi∈\cS(−L,L) for each i∈[n] in the following two scenarios: First, it is used to show that F∈\cS(−L,L), which can be derived as follows: for any \xb,\yb∈\RRd,

Second, it is used to upper bound the variance of the semi-stochastic gradient at each iteration, which is an unbiased estimator of the true gradient. More specifically, let

where ^\xb is the global minimum of F when F is convex or any snapshot of \xb when F is nonconvex. Then we have

We can see that in both scenarios, the weaker assumption {fi}ni=1∈\cV(L) is sufficient to make (11) and (12) hold. Thus, we make the following informal statement, which may be regarded as a slight improvement/modification in terms of assumptions over existing algorithms for nonconvex finite-sum optimization problems. For existing nonconvex finite-sum optimization algorithms including SDCA without Duality (Shalev-Shwartz, 2016), Natasha (Allen-Zhu, 2017b), KatyushaX (Allen-Zhu, 2018), RapGrad (Lan and Yang, 2018), StagewiseKatyusha (Chen and Yang, 2018) and RepeatSVRG (Agarwal et al., 2017; Carmon et al., 2018), we can replace the smoothness assumption that fi∈\cS(−L,L) with {fi}ni=1∈\cV(L), without affecting their IFO complexities.

Our proofs are based on the following three technical lemmas, whose proofs can be found in the supplementary material.