We prove a nearly tight lower bound on the approximate degree of the two-level AND-OR tree using symmetrization arguments. Specifically, we show that deg(AND_m ∘OR_n) = Ω(√(mn)). To our knowledge, this is the first proof of this fact that relies on symmetrization exclusively; most other proofs involve formulating approximate degree as a linear program and exhibiting an explicit dual witness. Our proof relies on a symmetrization technique involving Laurent polynomials (polynomials with negative exponents) that was previously introduced by Aaronson, Kothari, Kretschmer, and Thaler [AKKT19]. 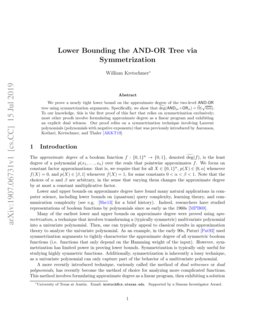 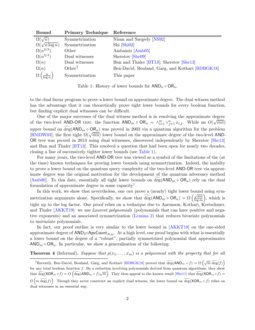 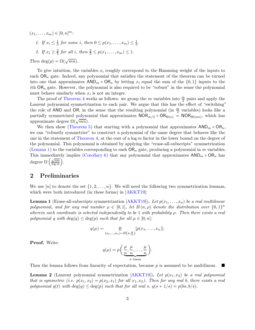 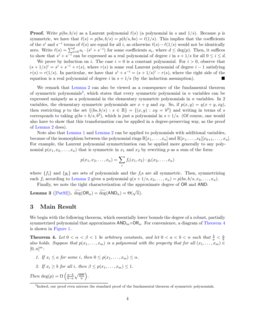 The approximate degree of a boolean function f:{0,1}n→{0,1}, denoted ˜deg(f), is the least degree of a polynomial p(x1,…,xn) over the reals that pointwise approximates f. We focus on constant factor approximations: that is, we require that for all X∈{0,1}n, p(X)∈[0,α] whenever f(X)=0, and p(X)∈[β,1] whenever f(X)=1, for some constants 0<α<β<1. Note that the choices of α and β are arbitrary, in the sense that varying them changes the approximate degree by at most a constant multiplicative factor.

Lower and upper bounds on approximate degree have found many natural applications in computer science, including lower bounds on (quantum) query complexity, learning theory, and communication complexity (see e.g. [She13] for a brief history). Indeed, researchers have studied representations of boolean functions by polynomials since as early as the 1960s [MPB69].

A more recently introduced technique, variously called the method of dual witnesses or dual polynomials, has recently become the method of choice for analyzing more complicated functions. This method involves formulating approximate degree as a linear program, then exhibiting a solution to the dual linear program to prove a lower bound on approximate degree. The dual witness method has the advantage that it can theoretically prove tight lower bounds for every boolean function, but finding explicit dual witnesses can be difficult.

One of the major successes of the dual witness method is in resolving the approximate degree of the two-level AND-OR tree: the function ANDm∘ORn=∧mi=1∨nj=1xi,j. While an O(√mn) upper bound on ˜deg(ANDm∘ORn) was proved in 2003 via a quantum algorithm for the problem [HMDW03], the first tight Ω(√mn) lower bound on the approximate degree of the two-level AND-OR tree was proved in 2013 using dual witnesses, discovered independently by Sherstov [She13] and Bun and Thaler [BT13]. This resolved a question that had been open for nearly two decades, closing a line of successively tighter lower bounds (see Table 1).

For many years, the two-level AND-OR tree was viewed as a symbol of the limitations of the (at the time) known techniques for proving lower bounds using symmetrization. Indeed, the inabilty to prove a lower bound on the quantum query complexity of the two-level AND-OR tree via approximate degree was the original motivation for the development of the quantum adversary method [Amb00]. To this date, essentially all tight lower bounds on ˜deg(ANDm∘ORn) rely on the dual formulation of approximate degree in some capacity111Recently, Ben-David, Bouland, Garg, and Kothari [BDBGK18] proved that ˜deg(ANDm∘f)=Ω(√m˜deg(f)) for any total boolean function f. By a reduction involving polynomials derived from quantum algorithms, they show that ˜deg(XORm∘f)=O(˜deg(ANDm∘f)√m). They then appeal to the known result [She11] that ˜deg(XORm∘f)=Ω(m˜deg(f)). Though they never construct an explicit dual witness, the lower bound on ˜deg(XORm∘f) relies on dual witnesses in an essential way..

In this work, we show that nevertheless, one can prove a (nearly) tight lower bound using symmetrization arguments alone. Specifically, we show that ˜deg(ANDm∘ORn)=Ω(√mnlogm), which is tight up to the log factor. Our proof relies on a technique due to Aaronson, Kothari, Kretschmer, and Thaler [AKKT19]: we use Laurent polynomials (polynomials that can have positive and negative exponents) and an associated symmetrization (Lemma 2) that reduces bivariate polynomials to univariate polynomials.

In fact, our proof outline is very similar to the lower bound in [AKKT19] on the one-sided approximate degree of AND2∘ApxCountN,w. At a high level, our proof begins with what is essentially a lower bound on the degree of a “robust”, partially symmetrized polynomial that approximates ANDm∘ORn. In particular, we show a generalization of the following:

To give intuition, the variables xi roughly correspond to the Hamming weight of the inputs to each ORn gate. Indeed, any polynomial that satisfies the statement of the theorem can be turned into one that approximates ANDm∘ORn by letting xi equal the sum of the {0,1} inputs to the ith ORn gate. However, the polynomial is also required to be “robust” in the sense the polynomial must behave similarly when xi is not an integer.

The proof of Theorem 4 works as follows: we group the m variables into m2 pairs and apply the Laurent polynomial symmetrization to each pair. We argue that this has the effect of “switching” the role of AND and OR, in the sense that the resulting polynomial (in m2 variables) looks like a partially symmetrized polynomial that approximates NORm/2∘ORΘ(n)=NORΘ(mn), which has approximate degree Ω(√mn).

We use [n] to denote the set {1,2,…,n}. We will need the following two symmetrization lemmas, which were both introduced (in these forms) in [AKKT19]:

Let p(x1,…,xn) be a real multilinear polynomial, and for any real number ρ∈[0,1], let B(n,ρ) denote the distribution over {0,1}n wherein each coordinate is selected independently to be 1

Then the lemma follows from linearity of expectation, because p is assumed to be multilinear. ∎

Note also that Lemma 1 and Lemma 2 can be applied to polynomials with additional variables, because of the isomorphism between the polynomial rings R[x1,…,xn] and R[x1,…,xk][xk+1,…,xn]. For example, the Laurent polynomial symmetrization can be applied more generally to any polynomial p(x1,x2,…,xn) that is symmetric in x1 and x2 by rewriting p as a sum of the form:

where {fi} and {gi} are sets of polynomials and the fis are all symmetric. Then, symmetrizing each fi according to Lemma 2 gives a polynomial q(s+1/s,x3,…,xn)=p(bs,b/s,x3,…,xn).

Finally, we note the tight characterization of the approximate degree of OR and AND:

We begin with the following theorem, which essentially lower bounds the degree of a robust, partially symmetrized polynomial that approximates ANDm∘ORn. For convenience, a diagram of Theorem 4 is shown in Figure 1.

Next, we show that a polynomial that approximates ANDm∘ORn can be “robustly symmetrized” one like in the statement of Theorem 4 with a=O(1) and b=O(logm).

Assume without loss of generality that p is multilinear (because x2=x over {0,1}), so that we can apply the erase-all-subscripts symmetrization (Lemma 1) separately to the inputs of each OR gate. This erases all of the “j” subscripts, giving a polynomial q(x1,…,xm) with deg(q)≤deg(p) such that:

where B(n,ρ) denotes the distribution over {0,1}n

Putting these two theorems together gives:

Though our lower bound on ˜deg(ANDm∘ORn) is not tight, it suggests a natural way get a tighter lower bound via the same method: either tighten the “robust symmetrization” argument in Theorem 5 to eliminate the log factor (i.e. construct a polynomial of the same degree with a=Ω(1) and b=O(1)), or show that Theorem 4 can be tightened by a logm factor. We conjecture that Theorem 4 is tight, and that Theorem 5 can be improved.

We remark that nevertheless, it is an open problem to exhibit polynomials of minimal degree that satisfy the statement of Theorem 4 with a and b constant, even in the case where n=1! We highlight this below:

In particular, do such polynomials exist of degree O(√m)?

More nontrivially, polynomials of degree O(√mclog∗m) are sufficient for some constant c>0, where log∗ denotes the iterated logarithm. Such polynomials can be derived from a quantum algorithm for search on bounded-error inputs described in the introduction of [HMDW03], using the well known connection between quantum query algorithms and approximating polynomials [BBC+01]. The algorithm involves partitioning the input into blocks of size log2m. Search on a single block can be done in O(logmloglogm) queries using the trivial error reduction procedure in combination with Grover search. Then, using an additional O(logm) queries, one can reduce the error probability in the case where xi≥23 for all i. Overall, the search on the block accepts with constant probability if xi≤13 for some i, and with probability 1poly(m) if xi≥23 for all i. One then applies this quantum algorithm recursively.

Note that the main algorithm of Høyer, Mosca, and de Wolf [HMDW03] does not give degree O(√m) polynomials for creftypecap 7, as the polynomial derived from that quantum algorithm requires each input to be in either [0,13] or [23,1]. In contrast, in case 1 of creftypecap 7, there may be some inputs in [13,23]. Likewise, Sherstov’s result on making polynomials robust to noise [She12] does not resolve the question, because it also only makes polynomials robust on inputs in ([0,13]∪[23,1])m.

This paper originated as a project in Scott Aaronson’s Spring 2019 Quantum Complexity Theory course; I am grateful for his guidance. I thank Robin Kothari for bringing creftypecap 7 and [BDBGK18] to my attention. Thanks also to Justin Thaler for helpful discussions and feedback.