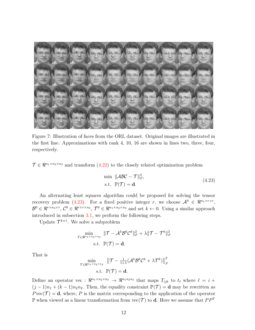 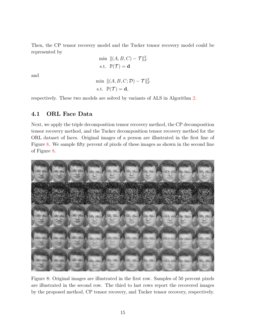 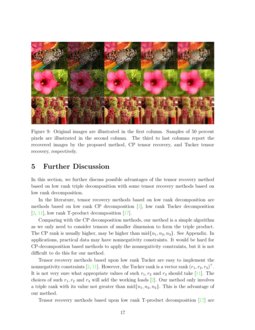 One approach for matrix completion and recovery is via low rank matrix decomposition. Suppose that we have an m×n real valued matrix X. Then we may decompose X as the product of two low rank matrices A and B, where A is an m×r matrix, and B is an r×n matrix, such that

The smallest integer value r such that (1.1) holds is called the rank of X. Such a decomposition is especially attractive for data matrices arising from real world applications, where, even though the dimensions m and n may be huge, often the rank r may be well smaller than min{m,n}, i.e.,

Suppose that X is observed as an m×n matrix M, which is only known in Ω. Let PΩ be the projection operator for Ω. Assume that the rank of X takes a value r satisfying (1.3). Then the matrix X may be recovered as ^X=AB, where A and B are solutions of

where ∥⋅∥F is the Frobenius norm for matrices.

where ∗ denotes the T-product [5], and

The smallest integer value r such that (1.5) holds is called the tubal rank of X [4]. For a third order data tensor X arising from real applications, we may have,

Suppose that X is observed as an n1×n2×n3 tensor M, which is only known in Ω. Let PΩ be the projection operator for Ω. Assume that the tubal rank of X takes a value r satisfying (1.7). Then the tensor X may be recovered by X=A∗B, where A and B are solutions of

∥⋅∥F is the Frobenius norm for tensors. The authors of [17]

showed that for image and video data recovery, their method clearly demonstrated the superior performance and efficiency over state of the arts including the Tensor Nuclear Norm (TNN) based and matricization based methods.

One may argue, however, that this approach treats the three modes somewhat unequally. In particular, structural properties of the third mode (i.e. corresponding to n3) is not exploited in this approach. For many applications, the roles of the three modes have important physical meanings. For example, in the tensor recovery problem for internet traffic data, the three modes of a third order tensor have explicit space and time meanings and their spatio-temporal relations should be considered in its tensor recovery [1, 10, 16]. If we apply the approach in [17] to such problems, it is not sure which two modes should be used as the first two modes in the T-product.

In this paper, we decompose a third order tensor to three low rank third tensors in a balanced way. We call such a decomposition the triple decomposition, and the corresponding rank the triple rank. Numerical tests show that third order tensor data from practical applications such as internet traffic and video image are of low triple ranks. A tensor recovery method is proposed based on such low rank triple decomposition. Numerically, this method is shown to be efficient.

The rest of this paper is distributed as follows. We introduce triple decomposition and triple rank in the next section. In Section 3, we show that practical data of third order tensors from internet traffic and video image are of low triple ranks. A tensor recovery method is proposed in Section 4, based on such low rank triple decomposition. Numerical comparisons of our method with some main methods for tensor recovery are also presented in that section. Further discussions are made in Section 5.

Comparing with some main methods for tensor recovery, this method has its own merits, and can be a new choice for practical users. This is the contribution of our paper.

then we call (2.9) a low rank triple decomposition of X. See Figure 3.

The smallest value of r such that (2.10) holds is called the triple rank of X, and is denoted as Rank(X)=r. For a zero tensor, we define its triple rank as zero. Note that Rank(X) is zero if and only if it is a zero tensor. This is analogous to the matrix case.

In the next two sections, we demonstrate that low rank triple decomposition and triple ranks are useful in applications. This is enough to justify their introduction. In the appendix, we study some of their properties and raise some theoretical questions. For practical users, these may be skipped.

3.1 A Method for Testing The Low Triple Rank Property

We are going to study an alternating least squares (ALS) algorithm for the triple decomposition of third order tensors in this subsection. Consider a given third order tensor X∈Rn1×n2×n3 with n1≥n2≥n3≥2 and a fixed positive integer r. The following cost function will be minimized

where A∈Rn1×r×r, B∈Rr×n2×r, C∈Rr×r×n3 are unknown. In this way, we will obtain a triple decomposition ABC of triple rank not greater than r, to approximate X.

ALS is an iterative approach starting from an initial points (A0,B0,C0)∈Rn1×r×r⊕Rr×n2×r⊕Rr×r×n3. Then we set k←0 and perform the following steps until the iterative sequence converges.

Update Ak+1. Fixing Bk and Ck, we solve a subproblem

the A-subproblem could be represented as

Then, the B-subproblem is rewritten as

Let H∈Rn1n2×r2 be a matrix with entries

Set k←k+1 and repeat the process. See Algorithm 1 for a complete algorithm. Here, we use the extrapolation technique with step size γ∈[1,2) to deal with the swamp effect. ALS may terminates if the difference between two iterates are tiny

or the iteration arrives a preset maximal iterative number. Convergence analysis of Algorithm 1 could be obtained by a similar approach presented in [3] using the semialgebraic property of tensors.

The first application we consider is the internet traffic data. The data set is the Abilene data set 111The abilene observatory data collections. http://abilene.internet2.edu/observatory/data-collections.html [10].

The Abilene data is arising from the backbone network located in North America. There are 11 routers: Atlanta GA, Chicago IL, Denver CO, Houston TX, Indianapolis, Kansas City MO, Los Angeles CA, New York NY, Sunnyvale CA, Seattle WA, and Washington DC. These routers send and receive data. Thus we get 121 original-destination (OD) pairs. For each OD pair, we record the internet traffic data of every 5 minutes in a week from Dec 8, 2003 to Dec 14, 2003. Hence, there are 7×24×60/5=2016 numbers for each OD pairs. In this way, we get a third order tensor XAbil with size 11-by-11-by-2016. This model was used in [1, 16] for internet traffic data recovery.

A similar conclusion is obtained if we view the Abilene traffic data as a third order tensor arranged differently as ~XAbil∈R121×96×21 which is indexed by 121 source-destination pairs, 96 time slots for each day, and 21 days. This is the model used in [10]. Figure 5 shows the relative error of the low rank approximations obtained by Algorithm 1 as a function of the target ranks upto 30. Actually, this is more illustrative as here n2=96 and the low rank triple decomposition is very good when r≥25.

In this section, we consider the tensor recovery problem:

An alternating least squares algorithm could be proposed for solving the tensor recovery problem (4.23). For a fixed positive integer r, we choose A0∈Rn1×r×r, B0∈Rr×n2×r, C0∈Rr×r×n3, T0∈Rn1×n2×n3 and set k←0. Using a similar approach introduced in subsection 3.1, we perform the following steps.

Update Tk+1. We solve a subproblem

Define an operator vec:Rn1×n2×n3→Rn1n2n3 that maps Tijk to tℓ where ℓ=i+(j−1)n1+(k−1)n2n2. Then, the equality constraint P(T)=d may be rewritten as Pvec(T)=d, where, P is the matrix corresponding to the application of the operator P

when viewed as a linear transformation from

vec(T) to d. Here we assume that PPT is invertible. Then, the above optimization problem may be represented as

which has a closed-form solution

This is defined as vec(˜Tk). Then, we set

we obtain ˜Ak by calculating

we obtain ˜Bk by calculating

we obtain ˜Ck by calculating

Subsequently, we set k←k+1 and repeat this process until convergence. The detailed algorithm are illustrated in Algorithm 2.

In addition, let D∈Rr×r×r be a core tensor. The Tucker tensor (A,B,C;D) has entries

respectively. These two models are solved by variants of ALS in Algorithm 2.

Once a tensor Trec is recovered, we calculate the relative error

Comparing with the CP decomposition methods, our method is a simple algorithm as we only need to consider tensors of smaller dimension to form the triple product. The CP rank is usually higher, may be higher than mid{n1,n2,n3}. See Appendix. In applications, practical data may have nonnegativity constraints. It would be hard for CP-decomposition based methods to apply the nonnegativity constraints, but it is not difficult to do this for our method.

Tensor recovery methods based upon low rank Tucker are easy to implement the nonnegativity constraints [2, 11]. However, the Tucker rank is a vector rank (r1,r2,r3)⊤. It is not very sure what appropriate values of such r1,r2 and r3 should take [11]. The choices of such r1,r2 and r3 will add the working loads [2]. Our method only involves a triple rank with its value not greater than mid{n1,n2,n3}. This is the advantage of our method.

We do not think that our method is superior to these methods in every aspects. However, our method has its own merits as discussed above, and thus would be a new choice of the practical applications.

Acknowledgment We are thankful to Dr. Qun Wang, who drew Figures 1-3 for us, and Prof. Ziyan Luo for her comments.

We consider some special cases of low rank triple decomposition. If Aiqs=aiαqs, Bpjs=bjβps, and Cpqk=ckγpq, by (2.10), then elements of the tensor X=ABC are

This means that the product tensor ABC is a rank-one tensor.

Then, this is a formulation of the Tucker decomposition. In addition, if the core tensor FGH is a diagonal tensor, we get the CP decomposition.

We have the following proposition.

Here Rank(X) is the triple rank of X, and RankCP(X) denotes the CP-rank of tensor X.