In this paper, we consider the problem of low-rank phase retrieval whose objective is to estimate a complex low-rank matrix from magnitude-only measurements. We propose a hierarchical prior model for low-rank phase retrieval, in which a Gaussian-Wishart hierarchical prior is placed on the underlying low-rank matrix to promote the low-rankness of the matrix. Based on the proposed hierarchical model, a variational expectation-maximization (EM) algorithm is developed. The proposed method is less sensitive to the choice of the initialization point and works well with random initialization. Simulation results are provided to illustrate the effectiveness of the proposed algorithm. 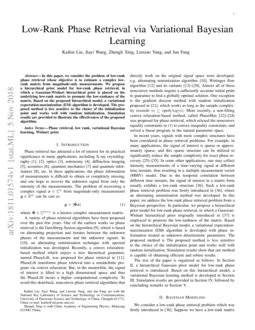 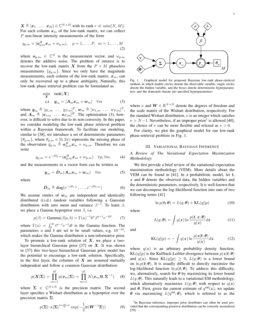 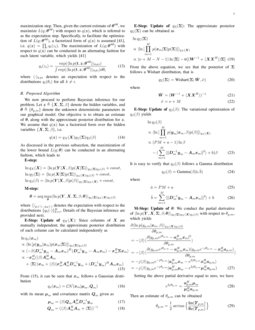 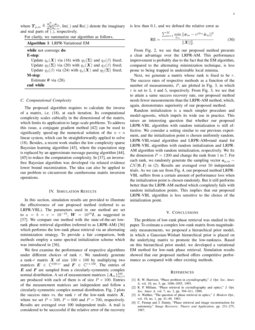 We study the low-rank phase retrieval problem, where the objective is to...
Soo Min Kwon, et al. ∙

We may think of low-rank matrix sensing as a learning problem with infin...
Armin Eftekhari, et al. ∙

Many computer vision problems can be posed as learning a low-dimensional...
Xiangyong Cao, et al. ∙

Phase retrieval has attracted a lot of interest for its practical significance in many applications, including X-ray crystallography [1, 2], optics [3], astronomy [4], diffraction imaging [5], acoustics [6], quantum mechanics [7] and quantum information [8], etc. In these applications, the phase information of measurements is difficult to obtain or completely missing, and one hope to recover the unknown signal from only the intensity of the measurements. The problem of recovering a complex signal x∈Cn from magnitude-only measurements y∈Rm can be cast as

where Φ∈Cm×n is a known complex measurement matrix.

A variety of phase retrieval algorithms have been proposed over the past few years. One of the earliest works on phase retrieval is the Gerchberg-Saxton algorithm [9], which is based on alternating projection and iterates between the unknown phases of the measurements and the unknown signals. In [10], an alternating minimization technique with spectral initialization was developed. Recently, a convex relaxation-based method which enjoys a nice theoretical guarantee, named PhaseLift, was proposed for phase retrieval in [11]. PhaseLift transforms phase retrieval into a semidefinite program via convex relaxation. But, in the meanwhile, the signal of interest is lifted to a high dimensional space and thus the PhaseLift incurs a higher computational complexity. To avoid this drawback, nonconvex phase retrieval algorithms that directly work on the original signal space were developed, e.g. alternating minimization algorithm [10], Wirtinger flow algorithm [12] and its variants [13, 14, 15, 16, 17, 18, 19, 20], Almost all of these nonconvex methods require a sufficiently accurate initial point to guarantee to find a globally optimal solution. One exception is the gradient descent method with random initialization proposed in [21], which works as long as the sample complexity exceeds m≳npolylog(n). More recently, a non-lifting convex relaxation-based method, called PhaseMax [22, 23, 24] was proposed for phase retrieval, which relaxed the nonconvex equality constraints in (1

) to convex inequality constraints, and solved a linear program in the natural parameter space.

In recent years, signals with more complex structures have been considered in phase retrieval problems. For example, in many applications, the signal of interest is sparse or approximately sparse, and this sparse structure can be utilized to significantly reduce the sample complexity for exact phase recovery [25, 26, 27, 28, 29, 30, 31, 32, 33, 34, 35]

[36]. Such a low-rank phase retrieval problem was firstly introduced in [36], where an alternating minimization method was developed. In this paper, we address the low-rank phase retrieval problem from a Bayesian perspective. In particular, we propose a hierarchical prior model for low-rank phase retrieval, in which a Gaussian-Wishart hierarchical prior originally introduced in [37] is employed to promote the low-rankness of the matrix. Based on the hierarchical Bayesian model, a variational expectation-maximization (EM) algorithm is developed with phase information treated as unknown deterministic parameters. The proposed method is The proposed method is less sensitive to the choice of the initialization point and works well with random initialization. Simulation results show that our method is capable of obtaining efficient and robust results.

The rest of the paper is organized as follows. In Section II, a hierarchical Gaussian prior model for low-rank phase retrieval is introduced. Based on this hierarchical model, a variational Bayesian learning method is developed in Section III. Simulation results are provided in Section IV, followed by concluding remarks in Section V.

We consider a low-rank phase retrieval problem which was firstly introduced in [36]. Suppose we have a low-rank matrix X≜[x10…0xM]∈CN×M with its rank r≪min{N,M}. For each column xm of the low-rank matrix, we can collect P non-linear intensity measurements of the form

where ap,m∈CN is the measurement vector, and wp,m denotes the additive noise. The problem of interest is to recover the low-rank matrix X from the P×M phaseless measurements {yp,m}. Since we only have the magnitude measurements, each column of the low-rank matrix, xm, can only be recovered up to a phase ambiguity. Naturally, this low-rank phase retrieval problem can be formulated as

where ym≜[y1,m0…0yP,m]T, wm≜[w1,m0…0wP,m]T, and Am≜[a1,m0…0aP,m]H. The optimization (3), however, is difficult to solve due to its non-convexity. In this paper, we consider modeling the low-rank phase retrieval problem within a Bayesian framework. To facilitate our modeling, similar to [38], we introduce a set of deterministic parameters {θp,m}, where θp,m∈[0,2π) represents the missing phase of the observation ~yp,m≜aHp,mxm+wp,m. Therefore we can write

and the measurements in a vector form can be written as

We assume entries of wm

, we place a Gamma hyperprior over

, which makes the Gamma distribution a non-informative prior.

ν is an integer which satisfies ν>N−1. Nevertheless, if an improper prior111

In Bayesian inference, improper prior distributes can often be used provided that the corresponding posterior distribution can be correctly normalized

For clarity, we plot the graphical model for our low-rank phase-retrieval problem in Fig. 1.

We first provide a brief review of the variational expectation maximization methodology (VEM). More details about the VEM can be found in [41]. In a probabilistic model, let t, z and θ denote the observed data, the hidden variables and the deterministic parameters, respectively. It is well-known that we can decompose the log-likelihood function into sum of two following terms [41]

is an arbitrary probability density function,

is the Kullback-Leibler divergence between

p(z|t;θ) and q(z). Since KL(q||p)≥0, L(q;θ) is a lower bound on lnp(t;θ). It is usually difficult to directly maximize the log-likelihood function lnp(t;θ). To address this difficulty, we, alternatively, search for θ by maximizing its lower bound L(q;θ). This naturally leads to a variational EM methodology, which alternatively maximizes L(q;θ) with respect to q(z) and θ. First, given the current estimate of qold(z), we update θ via maximizing L(qold;θ), which is referred to as the maximization step. Then, given the current estimate of θold, we maximize L(q;θold) with respect to q(z), which is referred to as the expectation step. Specifically, to facilitate the optimization of L(q;θold), a factorized form of q(z) is assumed [41], i.e. q(z)=∏iqi(zi). The maximization of L(q;θold) with respect to q(z) can be conducted in an alternating fashion for each latent variable, which yields [41]

We now proceed to perform Bayesian inference for our problem. Let z≜{X,Σ,β} denote the hidden variables, and θ≜{θp,m} denote the unknown deterministic parameters in our graphical model. Our objective is to obtain an estimate of θ, along with the approximate posterior distribution for z. We assume that q(z) has a factorized form over the hidden variables {X,Σ,β}, i.e.

As discussed in the previous subsection, the maximization of the lower bound L(q;θ) can be conducted in an alternating fashion, which leads to

where ⟨⟩q1(⋅)...qK(⋅) denotes the expectation with respect to the distributions {qk(⋅)}Kk=1. Details of the Bayesian inference are provided next.

E-Step: Update of qX(X): Since columns of X are mutually independent, the approximate posterior distribution of each column can be calculated independently as

From (15), it can be seen that xm follows a Gaussian distribution

with its mean μm and covariance matrix Qm given as

E-Step: Update of qΣ(Σ): The approximate posterior qΣ(Σ) can be obtained as

From the above equation, we see that the posterior of Σ follows a Wishart distribution, that is

E-Step: Update of qβ(β): The variational optimization of qβ(β) yields

M-Step: Update of θ: We conduct the partial derivative of ⟨lnp(Y,X,Σ,β;θ)⟩qΣ(Σ)qX(X)qβ(β) with respect to θp,m, which yields

Setting the above partial derivative equal to zero, we have

Then an estimate of θp,m can be obtained

where Υp,m≜aHp,mμmμHmap,m, Im(.) and Re(.) denote the imaginary and real parts of (.), respectively.

For clarity, we summarize our algorithm as follows.

The proposed algorithm requires to calculate the inverse of a matrix, i.e. (18), at each iteration. Its computational complexity scales cubically in the dimensional of the matrix, which limits its application to large-scale problems. To address this issue, a conjugate gradient method [42] can be used to significantly speed-up the numerical solution of the n×n linear system, which can be straightforwardly applied to solve (18). Besides, a recent work studies the low complexity sparse Bayesian learning algorithm [43], where the expectation step is replaced by an approximate message passing algorithm [44, 45] to reduce the computation complexity. In [37], an inverse-free Bayesian algorithm was developed via relaxed evidence lower bound maximization. The idea can also be applied to our problem to circumvent the cumbersome matrix inversion operations.

In this section, simulation results are provided to illustrate the effectiveness of our proposed method (referred to as LRPR-VBL). The parameters used in our method are set to a=b=v=10−10, W=1010I, as suggested in [37]. We compare our method with the state-of-the-art low-rank phase retrieval algorithm (referred to as LRPR-AM) [36] which performs the low-rank phase retrieval via an alternating minimization strategy. To provide a fair comparison, both methods employ a same spectral initialization scheme which was introduced in [36].

We first examine the performance of respective algorithms under different choices of rank r. We randomly generate a rank-r matrix X of size 100×100 by multiplying two matrices E∈C100×r and F∈Cr×100. The entries of E and F

are sampled from a circularly-symmetric complex normal distribution. A set of measurement matrices

{Am}100m=1 are produced with each of them is of size P×100. Entries of the measurement matrices are independent and follow a circularly-symmetric complex normal distribution. Fig. 2 plots the success rates vs. the rank r of the low-rank matrix X, where we set P=500, P=600 and P=700, respectively. Results are averaged over 100 independent trails. A trail is considered to be successful if the relative error of the recovery is less than 0.1, and we defined the relative error as

From Fig. 2, we see that our proposed method presents a clear advantage over the LRPR-AM. This performance improvement is probably due to the fact that the EM algorithm, compared to the alternating minimization technique, is less prone to being trapped in undesirable local minima.

Next, we generate a matrix whose rank is fixed to be r. The success rates of respective methods as a function of the number of measurements, P, are plotted in Fig. 3, in which r is set to 3, 4 and 5, respectively. From Fig. 3, we see that to attain a same success recovery rate, our proposed method needs fewer measurements than the LRPR-AM method, which, again, demonstrates superiority of our proposed method.