The paper considers two possible approaches, which enable multiple pairs of users to exchange information via multiple multi-antenna relays within one time-slot to save the communication bandwidth in low-latency communications. The first approach is to deploy full-duplexes for both users and relays to make their simultaneous signal transmission and reception possible. In the second approach the users use a fraction of a time slot to send their information to the relays and the relays use the remaining complementary fraction of the time slot to send the beamformed signals to the users. The inherent loop self-interference in the duplexes and inter-full-duplexing-user interference in the first approach are absent in the second approach. Under both these approaches, the joint users' power allocation and relays' beamformers to either optimize the users' exchange of information or maximize the energy-efficiency subject to user quality-of-service (QoS) in terms of the exchanging information throughput thresholds lead to complex nonconvex optimization problems. Path-following algorithms are developed for their computational solutions. The provided numerical examples show the advantages of the second approach over the first approach. 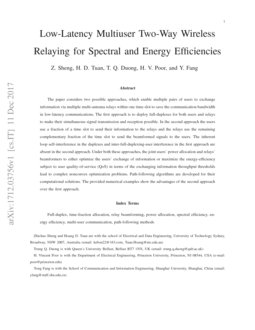 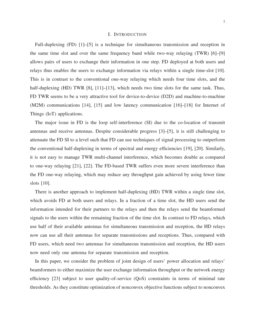 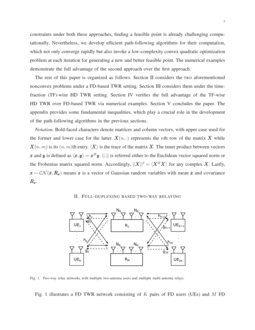 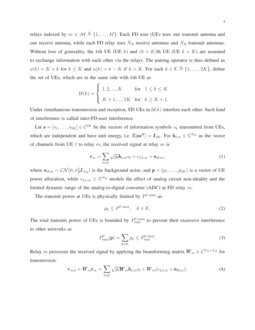 Full-duplexing (FD) [1, 2, 3, 4, 5] is a technique for simultaneous transmission and reception in the same time slot and over the same frequency band while two-way relaying (TWR) [6, 7, 8, 9] allows pairs of users to exchange their information in one step. FD deployed at both users and relays thus enables the users to exchange information via relays within a single time-slot [10]. This is in contrast to the conventional one-way relaying which needs four time slots, and the half-duplexing (HD) TWR [11, 12, 8, 13], which needs two time slots for the same task. Thus, FD TWR seems to be a very attractive tool for device-to-device (D2D) and machine-to-machine (M2M) communications [14, 15] and low latency communication [16, 17, 18] for Internet of Things (IoT) applications.

The major issue in FD is the loop self-interference (SI) due to the co-location of transmit antennas and receive antennas. Despite considerable progress [3, 4, 5], it is still challenging to attenuate the FD SI to a level such that FD can use techniques of signal processing to outperform the conventional half-duplexing in terms of spectral and energy efficiencies [19, 20]. Similarly, it is not easy to manage TWR multi-channel interference, which becomes double as compared to one-way relaying [21, 22]. The FD-based TWR suffers even more severe interference than the FD one-way relaying, which may reduce any throughput gain achieved by using fewer time slots [10].

In this paper, we consider the problem of joint design of users’ power allocation and relays’ beamformers to either maximize the user exchange information throughput or the network energy efficiency [23] subject to user quality-of-service (QoS) constraints in terms of minimal rate thresholds. As they constitute optimization of nonconvex objective functions subject to nonconvex constraints under both these approaches, finding a feasible point is already challenging computationally. Nevertheless, we develop efficient path-following algorithms for their computation, which not only converge rapidly but also invoke a low-complexity convex quadratic optimization problem at each iteration for generating a new and better feasible point. The numerical examples demonstrate the full advantage of the second approach over the first approach.

The rest of this paper is organized as follows. Section II considers the two aforementioned nonconvex problems under a FD-based TWR setting. Section III considers them under the time-fraction (TF)-wise HD TWR setting. Section IV verifies the full advantage of the TF-wise HD TWR over FD-based TWR via numerical examples. Section V concludes the paper. The appendix provides some fundamental inequalities, which play a crucial role in the development of the path-following algorithms in the previous sections.

Bold-faced characters denote matrices and column vectors, with upper case used for the former and lower case for the latter.

X(n,⋅) represents the nth row of the matrix X while X(n,m) is its (n,m)th entry. ⟨X⟩ is the trace of the matrix X. The inner product between vectors x and y is defined as ⟨x,y⟩=xHy. ||.|| is referred either to the Euclidean vector squared norm or the Frobenius matrix squared norm. Accordingly, ||X||2=⟨XHX⟩ for any complex X. Lastly, x∼CN(¯x,Rx) means x

is a vector of Gaussian random variables with mean

Fig. 1 illustrates a FD TWR network consisting of K pairs of FD users (UEs) and M FD relays indexed by m∈M≜{1,…,M}. Each FD user (UE) uses one transmit antenna and one receive antenna, while each FD relay uses NR receive antennas and NR transmit antennas. Without loss of generality, the kth UE (UE k) and (k+K)th UE (UE k+K) are assumed to exchange information with each other via the relays. The pairing operator is thus defined as a(k)=K+k for k≤K and a(k)=k−K if k>K. For each k∈K≜{1,…,2K}, define the set of UEs, which are in the same side with kth UE as

Under simultaneous transmission and reception, FD UEs in U(k) interfere each other. Such kind of interference is called inter-FD-user interference.

Let s=[s1,…,s2K]∈C2K be the vectors of information symbols sk transmitted from UEs, which are independent and have unit energy, i.e. E[ssH]=I2K. For hℓ,m∈CNR as the vector of channels from UE ℓ to relay m, the received signal at relay m is

where nR,m∼CN(0,σ2RINR) is the background noise, and p=(p1,…,p2K) is a vector of UE power allocation, while eLI,m∈CNR models the effect of analog circuit non-ideality and the limited dynamic range of the analog-to-digital converter (ADC) at FD relay m.

The transmit power at UEs is physically limited by PU,max as

The total transmit power of UEs is bounded by PU,maxsum to prevent their excessive interference to other networks as

This transmit power at relay m must be physically limited by a physical parameter PA,max as

and their sum is also bounded by PR,maxsum to control the network emission to other networks:

The relays transmit the processed signals to all UEs. For the vector channel gm,k∈CNR from relay m to UE k and channel χη,k from UE η∈U(k) to UE k, the received signal at UE k is given by

where nk∼CN(0,σ2k) is the background noise, and |χk,k|2=σ2SI as χk,k~sk represents the loop interference at UE k. We can rewrite (8) as

Note that the first term in (9) is the desired signal component, the third term is the inter-pair interference and the last two terms are noise. UE k can cancel the self-interference by the second term using the channel state information of the forward channels hk,m from itself to the relays and backward channels gm,k from the relays to itself as well as the beamforming matrix Wm. The challenges here is that the loop SI term ∑η∈U(k)χη,k√pη~sη, which may be strong due to the proximity of UEs in U(k), cannot be nulled out. This means more power should be given to the relays but it leads to more FD SI at the relays.

Furthermore, for fm,k≜g∗m,k, the signal-to-interference-plus-noise ratio (SINR) at UE k’ receiver can be calculated as

In FD TWR, the performance of interest is the exchange information throughput of UE pairs:

Another problem, which attracted recent attention in 5G [23, 24] is the following problem of maximizing the network energy-efficiency (EE) subject to UE QoS in terms of the exchange information throughput thresholds:

where ζ, PR and PU are the reciprocal of drain efficiency of power amplifier, the circuit powers of the relay and UE, respectively, and rk sets the exchange throughput threshold for UE pairs.

The next two subsections are devoted to computational solution for problems (14) and (15), respectively.

The main issue now is to handle the nonconcave objective function in (19a) of (19), which is resolved by the following theorem.

over the trust region

Proof:  (2) follows by applying inequality (59) in the Appendix for

and then the inequality

By Algorithm 1 we propose a path-following procedure for computing (19), which solves the following convex optimization problem of inner approximation at the κth iteration to generate the next feasible point (W(κ+1),α(κ+1),β(κ+1)):

Similarly to [13, Alg. 1], it can be shown that the sequence {(W(κ),α(κ),β(κ))} generated by Algorithm 1 at least converges to a local optimal solution of (19).222As mentioned in [27, Remark] this desired property of a limit point indeed does not require the differentiability of the objective function

The objective function in (25a) is nonconcave and constraint (25b) is nonconvex.

Suppose that (W(κ),α(κ),β(κ)) is a feasible point for (25) found from the (κ−1)th iteration. Applying inequality (Appendix) in the Appendix for

and using inequality (23) yield the following bound for the terms of the objective function in (25a):

Furthermore, we use f(κ)k,a(k) defined from (20) to provide the following inner convex approximation for the nonconvex constraint (25b):

By Algorithm 2 we propose a path-following procedure for computing (25), which solves the following convex optimization problem at the κth iteration to generate the next feasible point (W(κ+1),α(κ+1),β(κ+1)):

Analogously to Algorithm 1, the sequence {(W(κ),α(κ),β(κ))} generated by Algorithm 2 at least converges to a local optimal solution of (25).

An initial feasible point (W(0),α(0),β(0)) for initializing Algorithm 2 can be found by using Algorithm 1 for computing (14), which terminates upon

Through the FD-based TWR detailed in the previous section one can see the following obvious issues for its practical implementations:

We now propose a new way for UE information exchange via HD TWR within the time slot as illustrated by Fig. 2, where at time-fraction 0<τ<1 all UEs send information to the relays and at the remaining time fraction (1−τ) the relays send the beamformed signals to UEs. This alternative has the following advantages:

Suppose that UE k uses the power τpk to send information to the delay. The following physical limitation is imposed:

where ¯PUE is a physical parameter to signify the hardware limit in transmission during time-fractions. Typically, ¯PUE=3PU,max for PU,max defined from (2).

The received signal at relay m can be simply written as

Given the physical parameter PA,max as in (6) and then ¯PR=3PA,max, the transmit power at relay m is physically limited as

Given a budget PR,maxsum as in (7), the sum transmit power by the relays is also constrained as