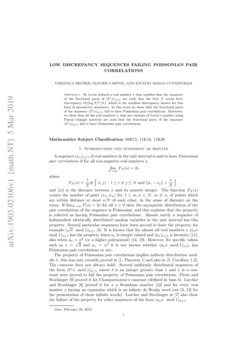 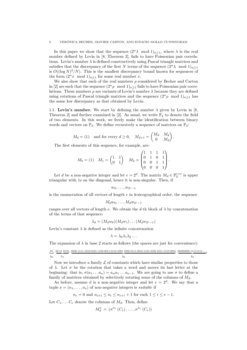 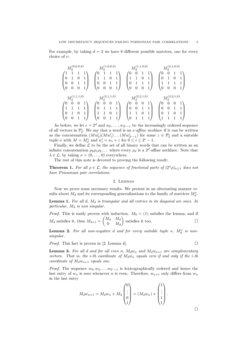 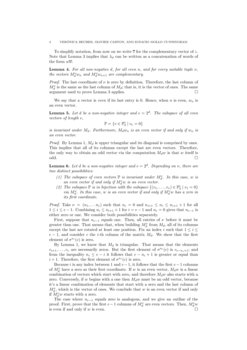 1. Introduction and statement of results

A sequence (xn)n≥1 of real numbers in the unit interval is said to have Poissonian pair correlations if for all non-negative real numbers s,

and ∥x∥ is the distance between x and its nearest integer. The function FN(s) counts the number of pairs (xn,xm) for 1≤m,n≤N, m≠n, of points which are within distance at most s/N of each other, in the sense of distance on the torus. If limN→∞F(s)=2s for all s≥0

then the asymptotic distribution of the pair correlations of the sequence is Poissonian, and this explains that the property is referred as having Poissonian pair correlations. Almost surely a sequence of independent identically distributed random variables in the unit interval has this property. Several particular sequences have been proved to have the property, for example

1, this was only recently proved in [1, Theorem 1] and also in [5, Corollary 1.2]. The converse does not always hold. Several uniformly distributed sequences of the form (bnxmod1)n≥1 where b is an integer greater than 1 and x is a constant were proved to fail the property of Poissonian pair correlations. Pirsic and Stockinger [9] proved it for Champernowne’s constant (defined in base b). Larcher and Stockinger [6] proved it for x a Stoneham number [12] and for every real number x having an expansion which is an infinite de Bruijn word (see [3, 13] for the presentation of these infinite words). Larcher and Stockinger in [7] also show the failure of the property for other sequences of the form (anxmod1)n≥1.

In this paper we show that the sequence (2nλmod1)n≥1, where λ is the real number defined by Levin in [8, Theorem 2], fails to have Poissonian pair correlations. Levin’s number λ is defined constructively using Pascal triangle matrices and satisfies that the discrepancy of the first N terms of the sequence (2nλmod1)n≥1 is O((logN)2/N). This is the smallest discrepancy bound known for sequences of the form (2nxmod1)n≥1 for some real number x.

We also show that each of the real numbers ρ considered by Becher and Carton in [2] are such that the sequence (2nρmod1)n≥1 fails to have Poissonian pair correlations. These numbers ρ are variants of Levin’s number λ because they are defined using rotations of Pascal triangle matrices and the sequence (2nρmod1)n≥1 has the same low discrepancy as that obtained by Levin.

We start by defining the number λ given by Levin in [8, Theorem 2] and further examined in [2]. As usual, we write F2

to denote the field of two elements. In this work, we freely make the identification between binary words and vectors on

F2. We define recursively a sequence of matrices on F2:

The first elements of this sequence, for example, are:

Let d be a non-negative integer and let e=2d. The matrix Md∈Fe×e2 is upper triangular with 1s on the diagonal, hence it is non-singular. Then, if

is the enumeration of all vectors of length e in lexicographical order, the sequence

ranges over all vectors of length e. We obtain the d-th block of λ by concatenation of the terms of that sequence:

Levin’s constant λ is defined as the infinite concatenation

The expansion of λ in base 2 starts as follows (the spaces are just for convenience):

Now we introduce a family L of constants which have similar properties to those of λ. Let σ be the rotation that takes a word and moves its last letter at the beginning: that is, σ(a1…an)=ana1…an−1. We are going to use σ to define a family of matrices obtained by selectively rotating some of the columns of Md.

Let C1,…Ce denote the columns of Md. Then, define

For example, by taking d=2 we have 8 different possible matrices, one for every choice of ν:

Finally, we define L to be the set of all binary words that can be written as an infinite concatenation ρ0ρ1ρ2… where every ρd is a 2d-affine necklace. Note that λ∈L, by taking ν=(0,…,0) everywhere.

The rest of this note is devoted to proving the following result:

For all ρ∈L, the sequence of fractional parts of (2nρ)n≥1 does not have Poissonian pair correlations.

Now we prove some necessary results. We present in an alternating manner results about Md and its corresponding generalizations to the family of matrices Mνd.

For all d, Md is triangular and all entries in its diagonal are ones. In particular, Md is non singular.

This is easily proven with induction. M0=(1) satisfies the lemma, and if Md satisfies it, then Md+1=(MdMd0Md) satisfies it too. ∎

For all non-negative d and for every suitable tuple ν, Mνd is non-singular.

The sequence w0,w2,…w2e−1 is lexicographically ordered and hence the last entry of wn is zero whenever n is even. Therefore, wn+1 only differs from wn in the last entry

To simplify notation, from now on we write ¯¯¯z for the complementary vector of z. Note that Lemma 3 implies that λd can be written as a concatenation of words of the form w¯¯¯¯w.

For all non-negative d, for all even n, and for every suitable tuple ν, the vectors Mνdwn and Mνdwn+1 are complementary.

We say that a vector is even if its last entry is 0. Hence, when n is even, wn is an even vector.

Let d be a non-negative integer and e=2d. The subspace of all even vectors of length e,

is upper triangular and its diagonal is comprised by ones. This implies that all of its columns except the last are even vectors. Therefore, the only way to obtain an odd vector via the computation

Mdw is that w itself is odd. ∎

Let d be a non-negative integer and e=2d. Depending on ν, there are two distinct possibilities:

First, suppose that ne−1 equals one. Then, all entries of ν before it must be greater than one. That means that, when building Mνd from Md, all of its columns except the last are rotated at least one position. Fix an index i such that 1≤i≤e−1, and consider c the i-th column of the matrix Md. We show that the first element of σni(c) is zero.

Because i is any index between 1 and e−1, it follows that the first e−1 columns of Mνd have a zero as their first coordinate. If w is an even vector, Mdw is a linear combination of vectors which start with zero, and therefore Mdw also starts with a zero. Conversely, if w begins with a one then Mdw must be an odd vector, because it’s a linear combination of elements that start with a zero and the last column of Mνd, which is the vector of ones. We conclude that w is an even vector if and only if Mνdw starts with a zero.

The case where ne−1 equals zero is analogous, and we give an outline of the proof. First, prove that the first e−1 columns of Mνd are even vectors. Then, Mνdw is even if and only if w is even. ∎

3. Proof of the main theorem

We first prove the theorem for λ and at the end we explain how to generalize the result to each number in the family L. For any given non-negative d, we set e=2d and show that for an appropriate choice of increasing N which depends on d and e, FN(2) diverges. For this we show that some selected patterns have too many occurrences in λd. More precisely, we count occurrences of binary words of length d+e,

The reason for this choice comes from Lemma 3 and it will soon become clear. We need some terminology. Given a word a as above and an occurrence of a in λd,

We require n to be an even number and z to be in the range d≤z≤e. The latter is to prevent the word a from spanning over more than two words, and the former is to ensure that a match for the first d letters automatically yields a match for the last d letters (a combination of Lemma 3 and the hypothesis over a). In addition, by Lemma 5 we know that Mdwn is an even word, and therefore az must be zero.

We fix k and count all possible occurrences in λd of every possible word a. There are exactly

words a with k zeros in ad…ae. For every one of them, we have a choice of k different z, because we know that az must be zero. We claim that each of those choices for z correspond to an actual occurrence of a in λd. Let’s suppose that the binary word a, whose length is d+e, starts in Mdwn and continues in Mdwn+1. Then, it must hold that, for some z,

So, Lemma 3 allows us to conclude that

By Lemma 1, we know that there exists some wn that satisfies this equation and by Lemma 5, n must be an even number. Therefore, given a choice of z there is an occurrence of a. We conclude that for every choice of k, and for every word a∈{0,1}e+d with k zeros in ad…ae, we have exactly k occurrences within λd.

We now prove that the sequence of fractional parts of (2nλ)n≥1 does not have Poissonian pair correlations. Take s=2 and N=2d+e+1. We prove that limd→∞FN(s)=∞. In order to do that, we note that two different occurrences of the same word a∈{0,1}e+d correspond to two different suffixes of λ that share its first e+d digits.

We write {x} to denote x−⌊x⌋, the fractional expansion of x. If a has two different occurrences within λ at positions i and j then

Therefore, if i and j are both no greater than N, the pairs (i,j) and (j,i) count for FN(s). For indices i and j of λ which correspond to elements of λd this is the case:

In the third step, we used the identity

and the last expression diverges as d→∞ because e is squared in the numerator but linear in the denominator and d is insignificant with respect to e. This concludes the proof that the sequence of the fractional parts of (2nλ)n≥1 does not have Poissonian pair correlations.

We now explain how the proof extends to for any given constant in L. Take ρ∈L. Then ρ can be written as a concatenation

where each ρd is a 2d-affine necklace. That means that for every d, there exists a suitable tuple ν such that

We take s=2 and Nd=2e+d+1 and we prove that the sequence FNd(s) diverges as d→∞. As we did for λ, it is possible to give a lower bound for FNd(s) by counting occurrences within ρd of words of length e+d.

Fix a non-negative integer d. By Lemma 6, there are two possibilities: either Mνd maps the subspace of even vectors P to itself, or it maps it to the set of vectors beginning with zero. In the first case, we can replicate essentially verbatim the procedure we followed for λ to get a lower bound for FNd(s). In the second case, we have to slightly alter the argument: z is redefined to be the index of a such that az matches the first letter of (Mνdwn+1), and k is redefined to be the number of ones in ad+1…ae+1. Despite these modifications, we reach the same lower bound for FNd(s). Since it diverges as d→∞ we conclude that the sequence of the fractional parts of (2nρ)n≥1 does not have Poissonian pair correlations.