Orthogonal signal-division multiplexing (OSDM) is an attractive alternative to conventional orthogonal frequency-division multiplexing (OFDM) due to its enhanced ability in peak-to-average power ratio (PAPR) reduction. Combining OSDM with multiple-input multiple-output (MIMO) signaling has the potential to achieve high spectral and power efficiency. However, a direct channel equalization in this case incurs a cubic complexity, which may be expensive for practical use. To solve the problem, low-complexity per-vector and block equalization algorithms of MIMO-OSDM are proposed in this paper for time-invariant and time-varying channels, respectively. By exploiting the channel matrix structures, these algorithms have only a linear complexity in the transformed domain. Simulation results demonstrate their validity and the related performance comparisons. 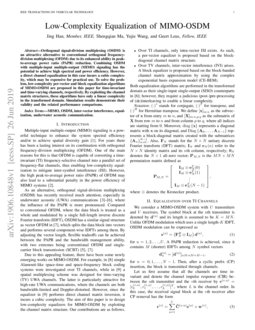 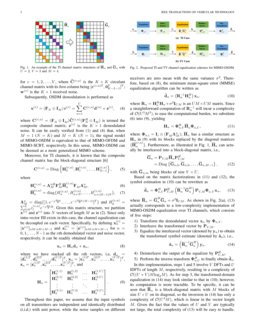 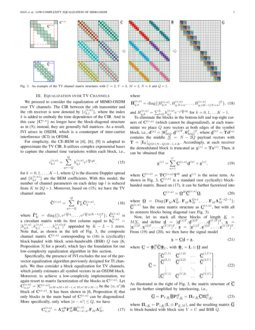 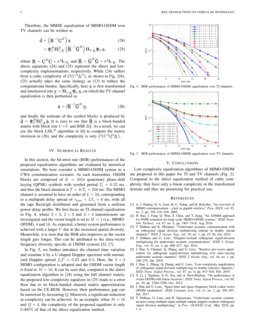 Multiple-input multiple-output (MIMO) signaling is a powerful technique to enhance the system spectral efficiency and/or to achieve spatial diversity gain [1]. For years there has been a lasting interest on its combination with orthogonal frequency-division multiplexing (OFDM). One of the main reasons for this is that OFDM is capable of converting a time-invariant (TI) frequency-selective channel into a parallel set of frequency-flat channels, thus enabling low-complexity equalization to mitigate inter-symbol interference (ISI). However, the high peak-to-average power ratio (PAPR) of OFDM may also lead to a substantial penalty in the power efficiency of MIMO systems [2].

, where the influence of the PAPR is more pronounced. Compared to conventional OFDM, where the data block is treated as a whole and modulated by a single full-length inverse discrete Fourier transform (IDFT), OSDM has a similar signal structure as vector OFDM in

[7], which splits the data block into vectors and performs several component-wise IDFTs among them. By adjusting the vector length, flexible tradeoffs can be achieved between the PAPR and the bandwidth management ability, with two extremes being conventional OFDM and single-carrier block transmission (SCBT) [7, 5].

Due to this appealing feature, there have been some newly emerging works on MIMO-OSDM. For example, in [8] simple Alamouti-like space-time and space-frequency block coding systems were investigated over TI channels, while in [9] a spatial multiplexing scheme was designed for time-varying (TV) UWA channels. The latter is particularly attractive for high-rate UWA communications, where the channels are both bandwidth-limited and Doppler-distorted. However, since the equalizer in [9] performs direct channel matrix inversion, it incurs a cubic complexity. The aim of this paper is to design low-complexity equalizers for MIMO-OSDM by exploiting the channel matrix structure. Our contributions are as follows.

Both equalization algorithms are performed in the transformed domain as their single-input single-output (SISO) counterparts in [6]; however, they require a judicious (post-)pre-processing of (de)interleaving to enable a linear complexity.

Notation: (⋅)∗ stands for conjugate, (⋅)T for transpose, and (⋅)H for Hermitian transpose. We define [x]m:n as the subvector of x from entry m to n, and [X]m:n,p:q as the submatrix of X from row m to n and from column p to q, where all indices are starting from 0. Moreover, diag{x} represents a diagonal matrix with x on its diagonal, and Diag{A0,…,AN−1} represents a block-diagonal matrix created with the submatrices {An}N−1n=0. Also, FN stands for the N×N unitary discrete Fourier transform (DFT) matrix; IN and eN(n) refer to the N×Nidentity matrix and its nth column, respectively; 0N denotes the N×1 all-zero vector; PM,N is the MN×MN permutation matrix defined as

where ⊗ denotes the Kronecker product.

We consider a MIMO-OSDM system with U transmitters and V receivers. The symbol block at the uth transmitter is denoted by d(u) and its length is assumed to be K=MN. Unlike OFDM modulation which uses a single length-K IDFT, OSDM modulation can be expressed as

for u=1,2,…,U. A PAPR reduction is achieved, since it contains M (shorter) IDFTs among N symbol vectors

for n=0,1,…,N−1. Then, after a cyclic prefix (CP) insertion, the block is transmitted through channels.

Let us first assume that all the channels are time invariant and denote the channel impulse response (CIR) between the uth transmitter and the vth receiver by c(v,u)=[c(v,u)0,c(v,u)1,…,c(v,u)L]T, where L is the channel order. In this case, the received signal block at the vth receiver after CP removal has the form

Subsequently, OSDM demodulation is performed as

where C(v,u)=(FN⊗IM)~C(v,u)(FHN⊗IM) is termed the composite channel matrix; z(v) is the K×1 demodulated noise. It can be easily verified from (1) and (4) that, when M=1 (N=K) and M=K (N=1), the signal model of MIMO-OSDM is equivalent to that of MIMO-OFDM and MIMO-SCBT, respectively. In this sense, MIMO-OSDM can be deemed as a more generalized MIMO scheme.

Moreover, for TI channels, it is known that the composite channel matrix has the block-diagonal structure [6]

Throughout this paper, we assume that the input symbols on all transmitters are independent and identically distributed (i.i.d.) with unit power, while the noise samples on different receivers are zero mean with the same variance

σ2. Therefore, based on (8), the minimum mean-square error (MMSE) equalization algorithm can be written as

where Rn=HHnHn+σ2IUM is an UM×UM matrix. Since a straightforward computation of R−1n will incur a complexity of O(U3M3), to ease the computational burden, we substitute (6) into (9), yielding

where Φn,i=Ii⊗(FMΛnM); ¯¯¯¯Hn has a similar structure as Hn in (9) with its blocks replaced by the diagonal matrices {¯¯¯¯H(v,u)n}. Furthermore, as illustrated in Fig. 1, ¯¯¯¯Hn can actually be interleaved into a block-diagonal matrix, i.e.,

Based on the matrix factorizations in (11) and (12

), the symbol estimation in (

where ¯¯¯¯Rn=¯¯¯¯GHn¯¯¯¯Gn+σ2IUM. As shown in Fig. 2(a), (13) actually corresponds to a low-complexity implementation of MIMO-OSDM equalization over TI channels, which consists of five steps:

In this implementation, steps 1 and 5 involve V DFTs and U IDFTs of length M, respectively, resulting in a complexity of O((U+V)Mlog2M). As for step 3, the transformed-domain equalization in (14) may look similar to that in (10); however, its computation is more tractable. To be specific, it can be seen that ¯¯¯¯Rn is a block-diagonal matrix with M blocks of size U×U on its diagonal, so the inversion in (14) has only a complexity of O(U3M), which is linear in the vector length M. Given the fact that the values of U and V are typically not large, the total complexity of (13) will be easy to handle.

We proceed to consider the equalization of MIMO-OSDM over TV channels. The CIR between the uth transmitter and the vth receiver is now denoted by {c(v,u)k,l}, where the index k is added to embody the time dependence of the CIR. And in this case {Cv,u} no longer have the block-diagonal structure as in (5); instead, they are generally full matrices. As a result, IVI arises in OSDM, which is a counterpart of inter-carrier interference (ICI) in OFDM.

For simplicity, the CE-BEM in [4, 6, 9] is adopted to approximate the TV CIR. It utilizes complex exponential bases to capture the channel time variations within each block, i.e.,

for k=0,1,…,K−1, where Q is the discrete Doppler spread and {h(v,u)q,l} are the BEM coefficients. With this model, the number of channel parameters on each delay tap l is reduced from K to 2Q+1. Moreover, based on (15), we have the TV channel matrix

Specifically, the presence of IVI excludes the use of the per-vector equalization algorithm previously designed for TI channels. We thus consider a block equalization for TV channels, which jointly estimates all symbol vectors in an OSDM block. Moreover, to achieve a low-complexity implementation, we again resort to matrix factorization of the blocks in C(v,u). Let C(v,u)n,n′=[C(v,u)]nM:nM+M−1,n′M:n′M+M−1 be the (n,n′)th block of C(v,u). It has been shown in [6, Proposition 4] that only blocks in the main band of C(v,u) can be diagonalized. More specifically, only when |n−n′|≤Q, we have

To eliminate the blocks in the bottom-left and top-right corners of C(v,u) (which cannot be diagonalized), at each transmitter we place Q zero vectors at both edges of the symbol block, i.e., d(u)=[0TMQ,d––(u)T,0TMQ]T, where d––(u)=Td(u) contains the middle N––=N−2Q payload vectors with T=[IK]QM:(N−Q)M−1,1:K. Accordingly, at each receiver the demodulated block is truncated as x–(v)=Tx(v). Then, it can be obtained that

As illustrated in the right of Fig. 3, the matrix structure of ¯¯¯¯C–– can be further simplified by interleaving, i.e.,

where , and the resulting matrix ¯¯¯¯G–– is block-banded with block size V×U and BSB Q.

Therefore, the MMSE equalization of MIMO-OSDM over TV channels can be written as

where and ¯¯¯¯R––=¯¯¯¯G––H¯¯¯¯G––+σ2IU–K. The above equations (24) and (25) represent the direct and low-complexity implementations, respectively. While (24) suffers from a cubic complexity of , as shown in Fig. 2(b), (25) actually takes the same strategy as (13) to reduce the computational burden. Specifically, here x– is first transformed and interleaved into y–=ΠV,K––Φ––Vx–, on which the TV channel equalization is then performed as

and finally the estimate of the symbol blocks is produced by . It is easy to see that ¯¯¯¯R–– is a block-banded matrix with block size U×U and BSB 2Q. As a result, we can use the block LDLH algorithm in [6] to compute the matrix inversion in (26), and the complexity is only O{U3Q2K––}.

In this section, the bit-error rate (BER) performances of the proposed equalization algorithms are evaluated by numerical simulations. We here consider a MIMO-OSDM system in a UWA communication scenario. At each transmitter, OSDM blocks are composed of K=1024 quaternary phase-shift keying (QPSK) symbols with symbol period Ts=0.25 ms, and thus the block duration is T=KTs=256 ms. The MIMO channel is assumed to have an order of L=24, corresponding to a multipath delay spread of τmax=LTs=6 ms, with all the taps Rayleigh distributed and generated from a uniform power delay profile. We first focus on TI channel equalization in Fig. 4, where 2×2, 2×3 and 2×4 transmissions are investigated and the vector length is set to M=1 (i.e., MIMO-OFDM), 4 and 16. As expected, a better system performance is achieved with a larger V due to the increased spatial diversity. Meanwhile, it is seen that the BER also improves as the vector length gets longer. This can be attributed to the intra-vector frequency diversity specific in OSDM systems [7, 5].

In Fig. 5, we further introduce the channel time variation and simulate it by a U-shaped Doppler spectrum with normalized Doppler spread fdT=0.25 and 0.5. Here, the 2×3 MIMO configuration is adopted and the OSDM vector length is fixed to M=16. It can be seen that, compared to the direct equalization algorithm in (24) using the full channel matrix, the proposed low-complexity equalizer in (25) leads to a error floor due to its block-banded channel matrix approximation based on the CE-BEM. However, their performance gap can be narrowed by increasing Q. Moreover, a significant reduction in complexity can be achieved. As an example, when M=16 and Q=4, the complexity of the proposed equalizer is only 0.008% of that of the direct equalization method.

Low-complexity equalization algorithms of MIMO-OSDM are proposed in this paper for TI and TV channels (Fig. 2). Compared to the direct equalization method of cubic complexity, they have only a linear complexity in the transformed domain and thus are promising for practical use.