Existing methods for robust multigroup multicast beamforming obtain feasible points using semidefinite relaxation (SDR) and Gaussian randomization, and have high computational complexity. In this letter, we consider the robust multigroup multicast beamforming design to minimize the sum power (SP) or per-antenna power (PAP) under the signal-to-interference-plus-noise ratio (SINR) constraints and to maximize the worst-case SINR under the SP constraint or PAP constraints, respectively. The resulting optimization problems are challenging non-convex problems with infinitely many constraints. For each problem, using the majorization-minimization (MM) approach, we propose an iterative algorithm to obtain a feasible solution which is shown to be a stationary point under certain conditions. We also show that the proposed algorithms have much lower computational complexity than existing SDR-based algorithms. 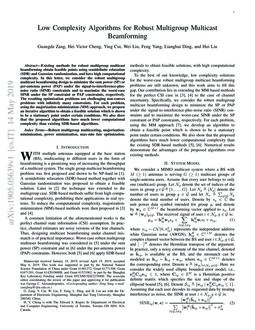 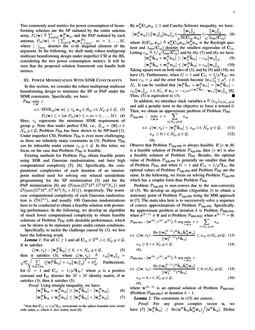 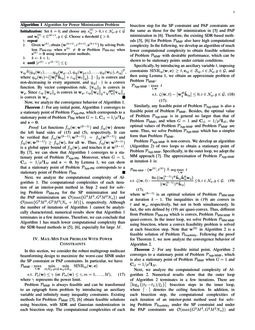 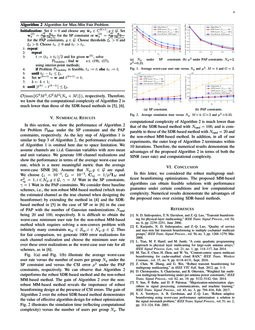 With multiple antennas equipped at the base station (BS), multicasting to different users in the form of beamforming is a promising way of increasing the throughput of a multicast system. The single group multicast beamforming problem was first proposed and shown to be NP-hard in [1]. A semidefinite relaxation (SDR)-based method together with Gaussian randomization was proposed to obtain a feasible solution. Later in [2] the technique was extended to the multigroup case. SDR-based methods suffer from high computational complexity, prohibiting their applications in real systems. To reduce the computational complexity, majorization-minimization (MM)-based methods were then proposed in [3] and [4].

A common limitation of the aforementioned works is the perfect channel state information (CSI) assumption. In practice, channel estimates are noisy versions of the true channels. Thus, designing multicast beamforming under channel mismatch is of practical importance. Worst-case robust multigroup multiuser beamforming was considered in

[5] under the sum power (SP) constraint and in [6] under the per-antenna power (PAP) constraints. However, both [5] and [6] apply SDR-based methods to obtain feasible solutions, with high computational complexity.

To the best of our knowledge, low complexity solutions for the worst-case robust multigroup multicast beamforming problems are still unknown, and this work aims to fill this gap. Our contribution lies in extending the MM-based methods for the perfect CSI case in [3, 4] to the case of channel uncertainty. Specifically, we consider the robust multigroup multicast beamforming design to minimize the SP or PAP under the signal-to-interference-plus-noise ratio (SINR) constraints and to maximize the worst-case SINR under the SP constraint or PAP constraints, respectively. For each problem, using the MM approach [7], we develop an algorithm to obtain a feasible point which is shown to be a stationary point under certain conditions. We also show that the proposed algorithms have much lower computational complexity than the existing SDR-based methods [5, 6]. Numerical results demonstrate the advantages of the proposed algorithms over existing methods.

We consider a MIMO multicast system where a BS with M (≥1) antennas is serving G (≥1) multicast groups of single-antenna users. Assume that every user belongs to only one (multicast) group. Let Ng denote the set of indices of the users in group g∈G≜{1,…,G}. Let Ng≜|Ng| denote the number of users in group g∈G and let Nu≜∑g∈GNg denote the total number of users. Denote by sg∈C the unit power data symbol intended for group g, and denote by wg∈CM×1

the beamforming vector applied to

where nig∼CN(0,σ2ig) represents the independent additive white Gaussian noise (AWGN), hHig∈C1×M denotes the complex channel vector between the BS and user i∈Ng,g∈G, and [ ⋅ ]H denotes the Hermitian transpose of the argument. In practice, only a noisy estimate of the true channel, denoted as ^hig, is available at the BS, and the mismatch can be modeled as hig=^hig+eig, where eig∈CM×1 denotes the corresponding error. Denote e≜(eig)i∈Ng,g∈G. Here we consider the widely used elliptic bounded error model, i.e., eHigCigeig≤1, where Cig∈SM is a Hermitian positive definite matrix which specifies the size and shape of the ellipsoid bound [5, 6]. Denote . Assuming that each user decodes its requested data by treating interference as noise, the SINR at user i∈Ng,g∈G is:

Two commonly used metrics for power consumption of beamforming schemes are the SP radiated by the entire antenna array, Ps(w)≜∑g∈GwHgwg, and the PAP radiated by each antenna, Pm(w)=[∑g∈GwgwHg]mm, m=1,…,M, where [ ⋅ ]mm denotes the m-th diagonal element of the argument. In the following, we shall study robust multigroup multicast beamforming design under imperfect CSI at the BS, considering the two power consumption metrics. It will be seen that the proposed solution framework can handle both metrics.

In this section, we consider the robust multigroup multicast beamforming design to minimize the SP or PAP under the SINR constraints. Specifically, we have:

Here, τg represents the minimum SINR requirement of group g. Note that under perfect CSI, i.e., Si,g={0},i∈Ng,g∈G, Problem PPM has been shown to be NP-hard [1]. Under imperfect CSI, Problem PPM is even more challenging, as there are infinitely many constraints in (3). Problem PPM can be infeasible under certain τg,g∈G. In this letter, we focus on the case that Problem PPM is feasible.

Specifically, to tackle the challenge caused by (3), we first have the following result.

Using triangle inequality, we have:

By eHigCigeig≤1 and Cauchy-Schwarz inequality, we have:

denotes the smallest eigenvalue of

In addition, we introduce slack variables s≜(sig)i∈Ng,g∈G and add a penalty term in the objective to force s toward 0. Then, we obtain an approximate problem of Problem PPM:

The constraints in (15) are convex.

Now, we analyze the convergence behavior of Algorithm 1.

In this section, we consider the robust multigroup multicast beamforming design to maximize the worst-case SINR under the SP constraint or PAP constraints. In particular, we have:

where γ represents the power limit.

Specifically, by introducing an auxiliary variable t, imposing constraints SINRig(w,e)≥t,eig∈Sig,i∈Ng,g∈G, and then using Lemma 1, we obtain an approximate problem of Problem PMMF:

where w(k−1) is an optimal solution of Problem PMM-MMF at iteration k−1. The inequalities in (19) are convex in t and wg, respectively, but not in both simultaneously. In fact, the sets defined by (19) are quasi-convex. Thus, different from Problem PMM-PM which is convex, Problem PMM-MMF is quasi-convex. In the inner loop, we solve Problem PMM-MMF using bisection, where a convex feasibility problem is solved at each bisection step. Note that w(0) in Algorithm 2 is a feasible solution of Problem PFeasibility. Following the proof for Theorem 1, we now analyze the convergence behavior of Algorithm 2.

[6]. Assume that Ng,g∈G are equal. We choose ξ1=10−3, ξ2=10−3, Cig=1/μ2IM and σ2ig=1,i∈Ng,g∈G, γ=M Watt in the SP constraints, γ=1 Watt in the PAP constraints. We consider three baseline schemes, i.e., the non-robust MM-based method (which treats the estimated channel as the true channel when designing the beamformer) by extending the method in [4] and the SDR-based method in [5] in the case of SP or in [6] in the case of PAP with the number of Gaussian randomizations Nrand being 20 and 100, respectively. It is difficult to obtain the worst-case minimum user rate for the non-robust MM-based method which requires solving a non-convex problem with infinitely many constraints eig∈Sig,i∈Ng,g∈G. Thus for fair comparison, we generate 1000 error realizations for each channel realization and choose the minimum user rate over these error realizations as the worst-case user rate for all schemes, as in [6].

In this letter, we considered the robust multigroup multicast beamforming optimizations. The proposed MM-based algorithms can obtain feasible solutions with performance guarantee under certain conditions and low computational complexity. Numerical results demonstrate the advantages of the proposed ones over existing SDR-based methods.