Lost in Machine Translation: A Method to Reduce Meaning Loss

A desideratum of high-quality translation systems is that they preserve meaning, in the sense that two sentences with different meanings should not translate to one and the same sentence in another language. However, state-of-the-art systems often fail in this regard, particularly in cases where the source and target languages partition the "meaning space" in different ways. For instance, "I cut my finger." and "I cut my finger off." describe different states of the world but are translated to French (by both Fairseq and Google Translate) as "Je me suis coupe le doigt.", which is ambiguous as to whether the finger is detached. More generally, translation systems are typically many-to-one (non-injective) functions from source to target language, which in many cases results in important distinctions in meaning being lost in translation. Building on Bayesian models of informative utterance production, we present a method to define a less ambiguous translation system in terms of an underlying pre-trained neural sequence-to-sequence model. This method increases injectivity, resulting in greater preservation of meaning as measured by improvement in cycle-consistency, without impeding translation quality (measured by BLEU score). 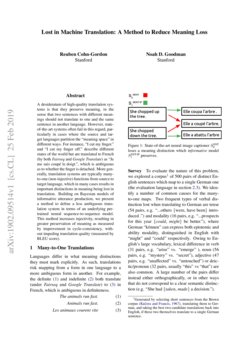 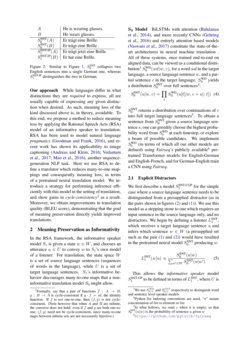 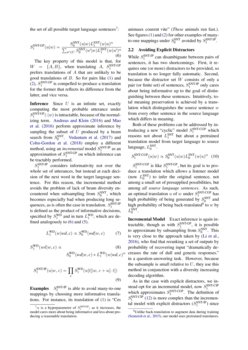 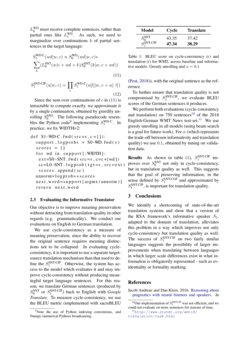 Summarize and Generate to Back-translate: Unsupervised Translation of Programming Languages

Towards Two-Dimensional Sequence to Sequence Model in Neural Machine Translation

A Winograd schema is a pair of sentences that differ in a single word an...
Ernest Davis, et al. ∙

In this paper, as a case study, we present a systematic study of gender ...
Anna Farkas, et al. ∙

Languages differ in what meaning distinctions they must mark explicitly. As such, translations risk mapping from a form in one language to a more ambiguous form in another. For example, the definite (1) and indefinite (2) both translate (under Fairseq and Google Translate) to (3) in French, which is ambiguous in definiteness.

To evaluate the nature of this problem, we explored a corpus111Generated by selecting short sentences from the Brown corpus (Kučera and Francis, 1967), translating them to German, and taking the best two candidate translations back into English, if these two themselves translate to a single German sentence. of 500 pairs of distinct English sentences which map to a single German one (the evaluation language in section 2.3). We identify a number of common causes for the many-to-one maps. Two frequent types of verbal distinction lost when translating to German are tense (54 pairs, e.g. “…others {were, have been} introduced .”) and modality (16 pairs, e.g. “…prospects for this year {could, might} be better.”), where German “können” can express both epistemic and ability modality, distinguished in English with “might” and “could” respectively. Owing to English’s large vocabulary, lexical difference in verb (31 pairs, e.g. “arise” vs. “emerge” ), noun (56 pairs, e.g. “mystery” vs. “secret”), adjective (47 pairs, e.g. “unaffected” vs. “untouched”) or deictic/pronoun (32 pairs, usually “this” vs “that”) are also common. A large number of the pairs differ instead either orthographically, or in other ways that do not correspond to a clear semantic distinction (e.g. “She had {taken, made} a decision.”).

While languages differ in what distinctions they are required to express, all are usually capable of expressing any given distinction when desired. As such, meaning loss of the kind discussed above is, in theory, avoidable. To this end, we propose a method to reduce meaning loss by applying the Rational Speech Acts (RSA) model of an informative speaker to translation. RSA has been used to model natural language pragmatics (Goodman and Frank, 2016), and recent work has shown its applicability to image captioning (Andreas and Klein, 2016; Vedantam et al., 2017; Mao et al., 2016), another sequence-generation NLP task. Here we use RSA to define a translator which reduces many-to-one mappings and consequently meaning loss, in terms of a pretrained neural translation model. We introduce a strategy for performing inference efficiently with this model in the setting of translation, and show gains in cycle-consistency222Formally, say that a pair of functions f:A→B, g:B→A is cycle-consistent if g⋅f=id, the identity function. If f is not one-to-one, then (f,g) is not cycle-consistent. (Note however that when A and B are infinite, the converse does not hold: even if f and g are both one-to-one, (f,g) need not be cycle-consistent, since many-to-one maps between infinite sets are not necessarily bijective.) as a result. Moreover, we obtain improvements in translation quality (BLEU score), demonstrating that the goal of meaning preservation directly yields improved translations.

In the RSA framework, the informative speaker model S1 is given a state w∈W, and chooses an utterance u∈U to convey w to S1’s own model of a listener. For translation, the state space W is a set of source language sentences (sequences of words in the language), while U is a set of target language sentences. S1’s informative behavior discourages many-to-one maps that a non-informative translation model S0 might allow.

constitute the state-of-the-art architectures in neural machine translation . All of these systems, once trained end-to-end on aligned data, can be viewed as a conditional distribution

333We use SWD0/1 and SSNT0/1 respectively to distinguish word and sentence level speaker models SWD0(wd|w,c), for a word wd in the target language, a source language sentence w, and a partial sentence c in the target language. SWD0 yields a distribution SSNT0 over full sentences444Python list indexing conventions are used, “+” means concatenation of list to element or list:

SSNT0 returns a distribution over continuations of c into full target language sentences555In what follows, we omit c when it is empty, so that SSNT0(u|w) is the probability of sentence u given w. To obtain a sentence from SSNT0 given a source language sentence s

, one can greedily choose the highest probability word from

SWD0 at each timestep, or explore a beam of possible candidates. We implement SWD0 (in terms of which all our other models are defined) using Fairseq’s publicly available666https://github.com/pytorch/fairseq pretrained Transformer models for English-German and English-French, and for German-English train a CNN using Fairseq.

We first describe a model SSNT-CGP1 for the simple case where a source language sentence needs to be distinguished from a presupplied distractor (as in the pairs shown in figures (2) and (1)). We use this model as a stepping stone to one which requires an input sentence in the source language only, and no distractors. We begin by defining a listener LSNT1, which receives a target language sentence u and infers which sentence w∈W (a presupplied set such as the pair (1) and (2)) would have resulted in the pretrained neural model SSNT0 producing u:

This allows the informative speaker model SSNT-GP1 to be defined in terms of LSNT1, where U is the set of all possible target language sentences777α

is a hyperparameter of

SSNT-GP1; as it increases, the model cares more about being informative and less about producing a reasonable translation.:

The key property of this model is that, for W={A,B}, when translating A, SSNT-GP1 prefers translations of A that are unlikely to be good translations of B. So for pairs like (1) and (2), SSNT-GP1 is compelled to produce a translation for the former that reflects its difference from the latter, and vice versa.

Since U is an infinite set, exactly computing the most probable utterance under SSNT-GP1(⋅|w) is intractable, because of the normalizing term. Andreas and Klein (2016) and Mao et al. (2016) perform approximate inference by sampling the subset of U produced by a beam search from SSNT0. Vedantam et al. (2017) and Cohn-Gordon et al. (2018) employ a different method, using an incremental model SSNT-IP1 as an approximation of SSNT-GP1 on which inference can be tractably performed.

SSNT-IP1 considers informativity not over the whole set of utterances, but instead at each decision of the next word in the target language sentence. For this reason, the incremental method avoids the problem of lack of beam diversity encountered when subsampling from SSNT0, which becomes especially bad when producing long sequences, as is often the case in translation. SSNT-IP1 is defined as the product of informative decisions, specified by SWD1 and in turn LWD1, which are defined analogously to (6) and (5).

While SSNT-IP1 can disambiguate between pairs of sentences, it has two shortcomings. First, it requires one (or more) distractors to be provided, so translation is no longer fully automatic. Second, because the distractor set W consists of only a pair (or finite set) of sentences, SSNT-IP1 only cares about being informative up to the goal of distinguishing between these sentences. Intuitively, total meaning preservation is achieved by a translation which distinguishes the source sentence w from every other sentence in the source language which differs in meaning.

Both of these problems can be addressed by introducing a new “cyclic” model SSNT-CGP1 which reasons not about LSNT1 but about a pretrained translation model from target language to source language, LSNT0.

SSNT-CGP1 is like SSNT-GP1, but its goal is to produce a translation which allows a listener model (now LSNT0) to infer the original sentence, not among a small set of presupplied possibilities, but among all source language sentences. As such, an optimal translation u of w under SSNT-CGP1 has high probability of being generated by SSNT0 and high probability of being back-translated888Unlike back-translation to augment data during training Sennrich et al. (2015), our model uses pretrained translators. to w by LSNT0.

Exact inference is again intractable, though as with SSNT-GP1, it is possible to approximate by subsampling from SSNT0. This is very close to the approach taken by (Li et al., 2016), who find that reranking a set of outputs by probability of recovering input “dramatically decreases the rate of dull and generic responses.” in a question-answering task. However, because the subsample is small relative to U, they use this method in conjunction with a diversity increasing decoding algorithm.

As in the case with explicit distractors, we instead opt for an incremental model, now SSNT-CIP1 which approximates SSNT-CGP1. The definition of SSNT-CIP1 (12) is more complex than the incremental model with explicit distractors (SSNT-IP1) since LWD0 must receive complete sentences, rather than partial ones like LWD1. As such, we need to marginalize over continuations k of partial sentences in the target language:

Since the sum over continuations of c in (11) is intractable to compute exactly, we approximate it by a single continuation, obtained by greedily unrolling SSNT0. The following pseudocode resembles the Python code999Note the use of Python indexing conventions, and Numpy (numerical Python) broadcasting. implementing SWD-C1. In practice, we fix WIDTH=2:

Our objective is to improve meaning preservation without detracting from translation quality in other regards (e.g. grammaticality). We conduct our evaluations on English to German translation.

We use cycle-consistency as a measure of meaning preservation, since the ability to recover the original sentence requires meaning distinctions not to be collapsed. In evaluating cycle-consistency, it is important to use a separate target-source translation mechanism than that used to define the SSNT-CIP1. Otherwise, the system has access to the model which evaluates it and may improve cycle-consistency without producing meaningful target language sentences. For this reason, we translate German sentences (produced by SSNT0 or SSNT-CIP1) back to English with Google Translate. To measure cycle-consistency, we use the BLEU metric (implemented with sacreBLEU (Post, 2018)), with the original sentence as the reference.

To further ensure that translation quality is not compromised by SSNT-CIP1, we evaluate BLEU scores of the German sentences it produces.

We perform both evaluations (cycle-consistency and translation) on 750 sentences101010Our implementation of SSNT-CIP1 was not efficient, and we could not evaluate on more sentences for reasons of time. of the 2018 English-German WMT News test-set.111111http://www.statmt.org/wmt18/translation-task.html We use greedy unrolling in all models (using beam search is a goal for future work). For α (which represents the trade-off between informativity and translation quality) we use 0.1, obtained by tuning on validation data.

We identify a shortcoming of state-of-the-art translation systems and show that a version of the RSA framework’s informative speaker S1, adapted to the domain of translation, alleviates this problem in a way which improves not only cycle-consistency but translation quality as well. The success of SSNT-CIP1 on two fairly similar languages suggests the possibility of larger improvements when translating between languages in which larger scale differences exist in what information is obligatorily represented - such as evidentiality or formality marking.