When training end-to-end learned models for lossy compression, one has to balance the rate and distortion losses. This is typically done by manually setting a tradeoff parameter β, an approach called β-VAE. Using this approach it is difficult to target a specific rate or distortion value, because the result can be very sensitive to β, and the appropriate value for β depends on the model and problem setup. As a result, model comparison requires extensive per-model β-tuning, and producing a whole rate-distortion curve (by varying β) for each model to be compared. We argue that the constrained optimization method of Rezende and Viola, 2018 is a lot more appropriate for training lossy compression models because it allows us to obtain the best possible rate subject to a distortion constraint. This enables pointwise model comparisons, by training two models with the same distortion target and comparing their rate. We show that the method does manage to satisfy the constraint on a realistic image compression task, outperforms a constrained optimization method based on a hinge-loss, and is more practical to use for model selection than a β-VAE. 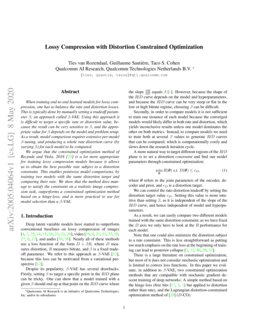 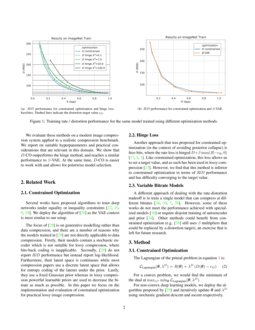 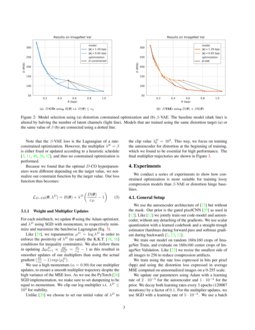 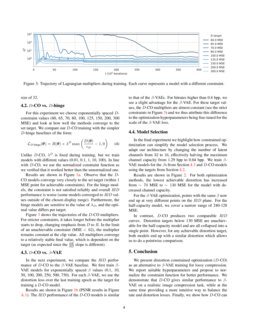 Even though rate-distortion optimization is a crucial part of traditiona...
Fabian Brand, et al. ∙

Critical Slowing Down Near Topological Transitions in Rate-Distortion Problems

Multi-Rate VAE: Train Once, Get the Full Rate-Distortion Curve

. Nearly all of these methods use a loss function of the form

D+βR, where D measures distortion, R measures bitrate, and β is a fixed tradeoff parameter. We refer to this approach as β-VAE [13], because this loss can be motivated from a variational perspective [12].

Despite its popularity, β-VAE has several drawbacks. Firstly, setting β to target a specific point in the R/D plane can be tricky. One can show that a model trained with a given β should end up at that point on the R/D curve where the slope ∂R∂D equals β [1]. However, because the shape of the R/D

curve depends on the model and hyperparameters, and because the

R/D curve can be very steep or flat in the low or high bitrate regime, choosing β can be difficult.

Secondly, in order to compare models it is not sufficient to train one instance of each model because the converged models would likely differ in both rate and distortion, which yields inconclusive results unless one model dominates the other on both metrics. Instead, to compare models we need to train both at several β values to generate R/D curves that can be compared, which is computationally costly and slows down the research iteration cycle.

A more natural way to target different regions of the R/D plane is to set a distortion constraint and find our model parameters through constrained optimization:

where θ refers to the joint parameters of the encoder, decoder and prior, and cD is a distortion target.

We can control the rate-distortion tradeoff by setting the distortion target value cD. Setting this value is more intuitive than setting β, as it is independent of the slope of the R/D curve, and hence independent of model and hyperparameters.

As a result, we can easily compare two different models trained with the same distortion constraint; as we have fixed the D axis we only have to look at the R performance for each model.

Note that one could also minimize the distortion subject to a rate constraint. This is less straightforward as putting too much emphasis on the rate loss at the beginning of training can lead to posterior collapse [3, 11, 40, 28, 32].

There is a large literature on constrained optimization, but most of it does not consider stochastic optimization and is limited to convex loss functions. In this paper we evaluate, in addition to β

-VAE, two constrained optimization methods that are compatible with stochastic gradient descent training of deep networks: A simple method based on the hinge loss (free bits

[17, 5, 1] but applied to distortion rather than rate), and the Lagrangian distortion-constrained optimization method of [29] (D-CO).

We evaluate these methods on a modern image compression system applied to a realistic compression benchmark. We report on suitable hyperparameters and practical considerations that are relevant in this domain. We show that D-CO outperforms the hinge method, and reaches a similar performance to β-VAE. At the same time, D-CO is easier to work with and allows for pointwise model selection.

Several works have proposed algorithms to train deep networks under equality or inequality constraints [22, 10, 9, 29]. We deploy the algorithm of [29] as the VAE context is most similar to our setup.

The focus of [29] is on generative modelling rather than data compression, and there are a number of reasons why the models trained in [29] are not directly applicable to data compression. Firstly, their models contain a stochastic encoder which is not suitable for lossy compression, where bits-back coding is inapplicable. Secondly, [29] do not report R/D performance but instead report log-likelihood. Furthermore, their latent space is continuous while most compression papers use a discrete latent space that allows for entropy coding of the latents under the prior. Lastly, they use a fixed Guassian prior whereas in lossy compression powerful learnable priors are used to decrease the bitrate as much as possible. In this paper we focus on the implementation and evaluation of constrained optimization for practical lossy image compression.

A different approach of dealing with the rate-distortion tradeoff is to train a single model that can compress at different bitrates [34, 30, 7, 39]. However, some of these works do not meet the performance achieved with specialized models [39]

or require disjoint training of autoencoder and prior

[34]. Other methods could benefit from constrained optimization (e.g. [39] still uses β multipliers that could be replaced by a distortion target), an exercise that is left for future research.

The Lagrangian of the primal problem in equation 1 is:

For a convex problem, we would find the minimum of the dual at maxλDminθLLagrangian(θ,λD).

For non-convex deep learning models, we deploy the algorithm proposed by

Note that the β-VAE loss is the Lagrangian of a rate-constrained optimization. However, the multiplier λR=β

is either fixed or updated according to a heuristic schedule

Because we found that the optimal D-CO hyperparameters were different depending on the target value, we normalize our constraint function by the target value. Our loss function thus becomes:

For each minibatch, we update θ using the Adam optimizer, and λD using SGD with momentum, to respectively minimize and maximize the batchwise Lagrangian (Eq. 3).

Like [29], we reparametrize μD=logλD in order to enforce the positivity of λD (to satisfy the K.K.T. [18, 16] conditions for inequality constraints). We also follow them in updating ΔμDt+1∝∂L∂λDt=DtcD−1 as this resulted in smoother updates of our multipliers than using the actual gradient (DtcD−1)exp(μDt).

) for our multiplier updates, to ensure a smooth multiplier trajectory despite the high variance of the MSE loss. As we use the PyTorch

[26] SGD implementation, we make sure to set dampening to be equal to momentum. We clip our log-multiplier s.t. λD≤103 for stability.

Unlike [29] we choose to set our initial value of λD to the clip value λD0=103. This way, we focus on training the autoencoder for distortion at the beginning of training, which we found to be essential for high performance. The final multiplier trajectories are shown in Figure 3.

We conduct a series of experiments to show how constrained optimization is more suitable for training lossy compression models than β-VAE or distortion hinge baselines.

we jointly train our code-model and autoencoder, without any detaching of the gradients. We use scalar quantization with a learned codebook and a straight-trough estimator (hardmax during forward pass and softmax gradient during backward)

[23] we resize the smallest side of all images to 256 to reduce compression artifacts.

for the prior. We decay both learning rates every 3 epochs (120087 iterations) by a factor of

Unlike D-CO, λD is fixed during training, but we train models with different values (0.01, 0.1, 1, 10, 100). In line with D-CO, we use the normalized constraint function as we verified that it worked better than the unnormalized one.

Results are shown in Figure (a)a. Observe that the D-CO models converge very closely to the set target (within 1 MSE point for achievable constraints). For the hinge models, the constraint is not satisfied reliably and overall R/D performance is worse (some models converged to R/D values outside of the chosen display range). Furthermore, the hinge models are sensitive to the value of λD, and the optimal value differs per target.

Figure 3 shows the trajectories of the D-CO multipliers. For stricter constraints, it takes longer before the multiplier starts to drop, changing emphasis from D to R. In the limit of an unachievable constraint (MSE <62), the multiplier remains constant at the clip value. All multipliers converge to a relatively stable final value, which is dependent on the target (as expected since the ∂R∂D slope is different).

Results are shown in Figure (b)b (PSNR results in Figure A.1). The R/D performance of the D-CO models is similar to that of the β-VAEs. For bitrates higher than 0.4 bpp, we see a slight advantage for the β-VAE. For these target values, the D-CO multipliers are almost constant (see the strict constraints in Figure 3) and we thus attribute this difference to the optimization hyperparameters being fine-tuned for the scale of the β-VAE loss.

In the final experiment we highlight how constrained optimization can simplify the model selection process. We adapt our architecture by changing the number of latent channels from 32 to 16, effectively halving the maximum channel capacity from 1.29 bpp to 0.64 bpp. We train β-VAE models for the βs from Section 4.3 and D-CO models using the targets from Section 4.2.

Results are shown in Figure 2. For both optimization methods, the lowest achievable distortion has increased from ∼70 MSE to ∼130 MSE for the model with decreased channel capacity.

For the β-VAE optimization, points with the same β now end up at very different points on the R/D plane. For the half-capacity model, we cover a narrow range of 240-128 MSE.

In contrast, D-CO produces two comparable R/D curves. Distortion targets below 130 MSE are unachievable for the half-capacity model and are all collapsed into a single point. However, for any achievable distortion target, both models end up with a similar distortion which allows us to do a pointwise comparison.

We present distortion constrained optimization (D-CO) as an alternative to β-VAE training for lossy compression. We report suitable hyperparameters and propose to normalize the constraint function for better performance. We demonstrate that D-CO gives similar performance to β-VAE on a realistic image compression task, while at the same time providing a more intuitive way to balance the rate and distortion losses. Finally, we show how D-CO can facilitate the model selection process by allowing pointwise model comparisons.