The amoeba of a Laurent polynomial is the image of the corresponding hypersurface under the coordinatewise log absolute value map. In this article, we demonstrate that a theoretical amoeba approximation method due to Purbhoo can be used efficiently in practice. To do this, we resolve the main bottleneck in Purbhoo's method by exploiting relations between cyclic resultants. We use the same approach to give an approximation of the Log preimage of the amoeba of a Laurent polynomial using semi-algebraic sets. We also provide a SINGULAR/SAGE implementation of these algorithms, which shows a significant speedup when our specialized cyclic resultant computation is used, versus a general purpose resultant algorithm. 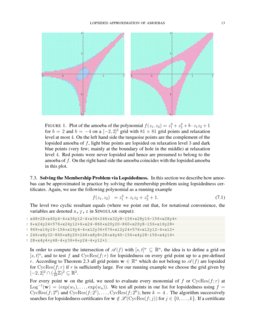 Gelfand, Kapranov and Zelevinsky introduced amoebas in [GKZ94, Definition 6.1.4] in the context of toric geometry. Since then, amoebas have been used in different areas such as complex analysis [FPT00, PR04], real algebraic curves [Mik00], statistical thermodynamics [PPT13], and nonnegativity of real polynomials [IdW16]. Overviews on amoeba theory include [dW17, Mik04, PT05].

The usefulness of amoebas motivates the problem of finding an efficient algorithm for computing them. Since Log|⋅| is a non-algebraic map, A(f) is not a semi-algebraic set in general. The amoeba A(f) is, however, a semi-analytic set. The absolute value map, on the other hand, is a real algebraic map. Therefore, the unlog amoeba U(f) is a real semi-algebraic set. Hence, the ideal solution to the problem of amoeba computation can be described as follows.

Given a Laurent polynomial f∈C[z±1], efficiently compute a real semi-algebraic description of the unlog amoeba U(f).

Theobald was the first to tackle computational aspects of amoebas in [The02]. He described, in the case n=2, methods to compute a superset of the boundary of A(f) called the contour of A(f). Later, his method was extended by Schroeter and the fourth author in [SdW13], who provide a method to test whether a contour point of A(f) belongs to the boundary of A(f) in the case when the hypersurface defined by f is smooth.

An approach, different than Theobald’s, for computing amoebas arises from following problem.

The membership problem was addressed by Purbhoo in [Pur08], using the notion of lopsidedness; see Definition 1.3. A second approach for certifying non-membership of a point in A(f) was provided by Theobald and the fourth author in [TdW15] using semidefinite programming and sums of squares. A rough but quick method to approximate amoebas was given by Avendaño, Kogan, Nisse and Rojas [AKNR13] via tropical geometry. In [BKS16], Bogdanov, Kytmanov and Sadykov computed amoebas in dimensions two and three, with focus on amoebas with the most complicated topology possible. We remark that even for univariate polynomials deciding the membership problem is NP-hard [AKNR13, Section 1.2].

The main aim of this article is to make the results in [Pur08] effective and efficient in practice.

The lopsided amoeba of f is defined by

It is not hard to see that A(f)⊆L(f); the special case n=1 of this result was proven in the nineteenth century, in an equivalent formulation, by Pellet [Pel81]. We remark that, in general, A(f)≠L(f).

The main obstacle in turning Purbhoo’s result into an efficient approximation method for amoebas is the difficulty in computing the polynomials CycRes(f;r). The degree and the number of terms of CycRes(f;r) grow exponentially with r, but more importantly, the methods used by computer algebra systems to find resultants fail to take advantage of the sparseness of the polynomials uri−1, and are therefore manifestly inefficient when applied to CycRes(f;r).

Our main results are as follows.

Purbhoo’s Amoeba Approximation Theorem is the main ingredient in the proof of Theorem 6.1 and in Algorithm 6.2. Using toric geometry, we also show that there exists a natural correspondence between the boundary components of lopsided amoebas and the boundary components of linear amoebas, where the latter are well understood due to Forsberg, Passare, and Tsikh [FPT00]; see Section 5 for further details.

Lemma 3.3 allows us to compute cyclic resultants for powers r=2k

using a divide and conquer algorithm. Note that several prominent algorithms are built on a similar approach, for example the Cooley–Tukey algorithm for the Fast Fourier Transformation

As a companion to this work we provide the first implementation of lopsided approximation of amoebas, available here:

This paper is organized as follows. Section 2 contains background on amoebas and lopsided amoebas. Section 3 outlines a fast way of computing certain cyclic resultants. In Section 4 we describe how the algorithm from Section 3 can be used to approximate amoebas. Section 5

6 we describe how to use results from Sections 3 and 5 to compute semialgebraic sets approximating the amoeba. Finally, Section 7 is devoted to examples.

In this section, we review the theory of amoebas and lopsided amoebas which is used in this work.

Recall that throughout this article, f∈C[z±1] denotes the Laurent polynomial (1.1). We denote by A the support of f, namely,

For a nonzero Laurent polynomial f, the complement Rn∖A(f) is non-empty. Every component of Rn∖A(f) is convex and open (with respect to the standard topology).

Forsberg, Passare and Tsikh [FPT00] showed that every component of the complement of an amoeba A(f) can be associated with a specific lattice point in the Newton polytope New(f) via the order map:

The image of the order map is contained in New(f)∩Zn. Let w,w′∈Rn∖A(f). Then w and w′ belong to the same component of the complement of A(f) if and only if ord(w)=ord(w′).

As a consequence of Theorem 2.2, it is possible to define the component of order α of the complement of A(f). We use the following notation:

We now give a more precise statement of the main result in [Pur08], which was alluded to in the introduction.

For r→∞ the family L(CycRes(f;r)) converges uniformly to A(f). More precisely, for every ε>0 there exists an integer N such that for all r>N the lopsided amoeba L(CycRes(f;r)) is contained in an ε-neighborhood of A(f).

The integer N in Theorem 2.3 depends only on ε and the Newton polytope (or degree) of f, and can be computed explicitly from this data. For simplicity, assume that f is a polynomial of degree d. Let Log|v|∈Rn∖A(f) be of distance at least ε from the amoeba A(f). Then, by [Pur08, Theorem 1], if r is chosen such that

then it holds that CycRes(f;r) is lopsided at the point Log|v|. We will typically be interested in the case r=2k. Then, it suffices that

If f is lopsided at a point Log|v|∈Rn, then it is straightforward to determine the order of the component of the complement of A(f) which contains Log|v|.

The following useful criterion for lopsidedness is a consequence of the triangle inequality.

The Laurent polynomial f(z) is not lopsided at Log|z| if and only if there exist arguments θ∈(S1)d such that ∑dj=1bjeθj√−1zα(j)=0.

In this section, we provide a fast way of computing certain cyclic resultants.

We recall the Poisson formula for the resultant. If f(z) and g(z) are univariate polynomials, and g has leading coefficient b, then

The equality follows from the Poisson formula, since u2k+1−1=(u2k−1)(u2k+1), and these factors have disjoint sets of roots. ∎

Proof of correctness of Algorithm 3.4.

In order to perform the complexity analysis we will impose the assumption that n=1. This is not a severe restriction, as for a multivariate polynomial our algorithm iterates the univariate case, however it greatly simplifies the computations.

We count complexity as the number of arithmetic operations performed in a field containing the coefficients of f. Here, we consider addition and multiplication to have the same cost. In the comparison with the signed resultant algorithm we need to assume that the coefficients are real; however, this does not affect our complexity analysis.

By Lemma 3.1 we have that, for each l, the polynomial CycResult has at most d+1 terms. Multiplying the coefficient of every second term (i.e., the terms whose exponents are not divisible by 2l) by −1 requires ⌊d/2⌋ arithmetic operations.

Since we perform this task k times, the total complexity is less than

The algorithm we propose is, hence, a vast improvement. In particular since, in the typical situation, the degree d is fixed while one varies the parameter k in order to obtain an improved approximation. Overall, it reduces the runtime from exponential to polynomial in one variable and from double to single exponential in arbitrary many variables.

We point out that Hillar and Levine [Hil05, HL07] have shown that the sequence of cyclic resultants {Resz(g(z),zk−1)}∞k=1 satisfies a linear recurrence of order 2deg(g). While this recurrence can be used to compute all cyclic resultants, it is in general slower than our method for computing Resu(g(zu),u2k−1), and the latter is sufficient for our purposes.

In this section, we describe how Algorithm 3.4 can be applied to approximate an amoeba of a given polynomial. There are two obstacles in obtaining an algorithm to approximate amoebas from the results of Section 3. First, we can only compute cyclic resultants of finite level k. That is, according to Theorem 2.3 and Remark 2.4, we can only test for membership in some ε neighborhood of the amoeba, where ε determines k. Second, it is not effective to test all points of Rn for membership.

Neither of these obstacles are insurmountable. Our approach will be as follows. Let us fix some ε>0, which determines the integer k in accordance with Remark 2.4. Also, we will construct a grid \definecolor[named]pgfstrokecolorrgb0,0,1\pgfsys@color@rgb@stroke001\pgfsys@color@rgb@fill001G:=[s,t]n∩(ℓ⋅Z)n⊆Qn for some ℓ∈Qn. Here, ℓ should be chosen small enough so that any ball of radius ε inside [s,t]n contains at least one point of G. Then, testing the finitely many points of G on the level k, we are assured to find points in every component of the complement of the amoeba whose intersection with [s,t]n contains a ball of radius ε. Since the complement of the amoeba consists of a finite number of open sets, this ensures that we will find all components of the complement if ε is chosen sufficiently small. Though, we remark that there is currently no explicit expression describing how small ε should be chosen. In practice we will chose the grid G rather than ε; the latter can then be determined from the former.

5. Geometry of the Lopsided Amoeba

The main result of this section, Theorem 5.2, gives a geometric interpretation of the lopsided amoeba of a Laurent polynomial.

For convenience, we denote the coordinates of Rd×Rd by (Log|w|,Log|x|).

and the result follows. ∎

We embed A(XA) in the second factor Rd×Rd, in order to be able to compare this set to the amoeba A(F). Let \definecolor[named]pgfstrokecolorrgb0,0,1\pgfsys@color@rgb@stroke001\pgfsys@color@rgb@fill001¯¯¯¯¯prA=sA∘pr2. Note that, given b, the induced map

is an affine isomorphism.

By Lemma 2.6, f is not lopsided at Log|z| if and only if there exist angles θb∈(S1)d such that