For the discretization of the convective term in the Navier-Stokes equations (NSEs), the commonly used convective formulation (CONV) does not preserve the energy if the divergence constraint is only weakly enforced. In this paper, we apply the skew-symmetrization technique in [B. Cockburn, G. Kanschat and D. Schötzau, Math. Comp., 74 (2005), pp. 1067-1095] to conforming finite element methods, which restores energy conservation for CONV. The crucial idea is to replace the discrete advective velocity with its a H(div)-conforming divergence-free approximation in CONV. We prove that the modified convective formulation also conserves linear momentum, helicity, 2D enstrophy and total vorticity under some appropriate senses. Its a Picard-type linearization form also conserves them. Under the assumption u∈ L^2(0,T;W^1,∞(Ω)), it can be shown that the Gronwall constant does not explicitly depend on the Reynolds number in the error estimates. The long time numerical simulations show that the linearized and modified convective formulation has a similar performance with the EMAC formulation and outperforms the usual skew-symmetric formulation (SKEW). 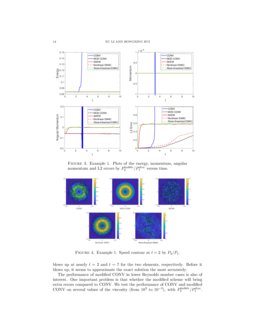 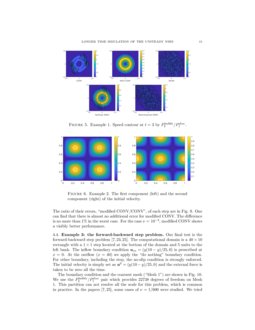 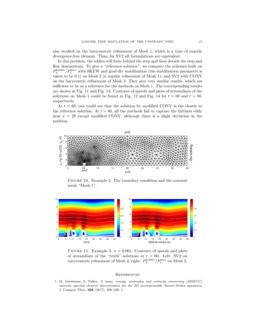 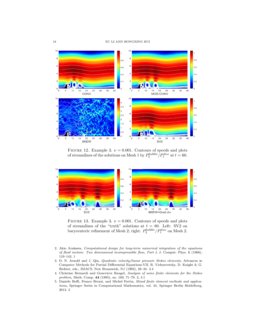 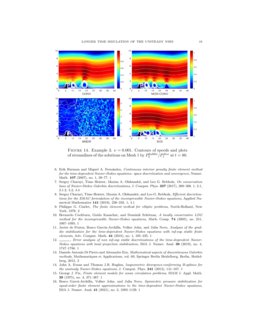 In this paper, we consider the recently introduced EMAC formulation for ...
Maxim A. Olshanskii, et al. ∙

An energy, momentum and angular momentum conserving scheme for a regularization model of incompressible flow

The velocity solution of the incompressible Stokes equations is not affe...
Thomas Apel, et al. ∙

In the spirit of the "Principle of Equipresence" introduced by Truesdell...
Xi Chen, et al. ∙

where Ω⊂Rd (d=2,3) is a bounded domain with Lipschitz and polyhedral boundary Γ; the velocity u and pressure p are two unknowns; ν>0 is the constant kinematic viscosity; f=f(x) represents the external body force at x∈Ω; and u0 denotes the initial velocity.

Physically, there are several balance laws implied in the Navier-Stokes equations such as the balances of kinetic energy, linear momentum and angular momentum (EMA) [14, 7]. In some cases (e.g., vanishing external force and viscosity), these quantities are conservative under some appropriate assumptions [7]. Since at least Arakawa devised an energy and enstrophy conservation method for two-dimensional NSEs in [2], scientists have recognised that these conservation (balance) laws are important references for unlocking efficient and stable numerical methods for NSEs [15, 39, 38, 1, 14, 36]. A violation of these laws may bring unexpected instability.

In this paper, we consider inf-sup stable mixed methods for NSEs. The crucial points for these balance laws are the discretization of the nonlinear term and the finite elements one uses. The most common formulation for this term might be the so-called convective formulation (CONV). However, it was shown in [7] that this formulation was not EMA-conserving unless exactly divergence-free elements were used. We note that most classical elements are not divergence-free [24]. Also in [7], Charnyi et al. proposed an EMA-conserving formulation (”EMAC”) for the common elements. The numerical experiments in [7, 29, 28, 37] demonstrated that this formulation was always among the best discretizations of the nonlinear term. In addition, the EMAC formulation was also shown to preserve the 2D enstrophy, helicity and total vorticity under certain appropriate assumptions. In the paper [36], Olshanskii and Rebholz proved that the Gronwall constant in the EMAC error estimates does not explicitly depend on the Reynolds number, which is contrast to other formulations such as SKEW. We note that, although the EMAC formulation has many fascinating properties, it is not easy to find a fully satisfactory linearization scheme for it. In [8], Charnyi et al. proposed two linearization schemes for this method: a skew-symmetric linearization and the Newton linearization. The former did not conserve momentum and angular momentum, which gave a poor performance for some problems, the latter conserved momentum and angular momentum but was not energy-stable. The objective of this paper is to design an alternative formulation that is very suited to Picard linearization.

The idea for this paper goes back to a class of locally discontinuous Galerkin (DG) methods for NSEs, cf. [10]. By replacing one of the velocity with its a divergence-free approximation in the nonlinear term, a class of energy-stable DG methods were developed in [10]. Similar techniques were also applied in [21, 26] and to coupled flow-transport problems [34, 19, 24]. Meanwhile, seeking an exactly divergence-free approximation to some discretely divergence-free velocity is also an objective of the pressure-robust reconstruction methods [32, 27, 31], where a large class of divergence-free reconstruction operators were proposed, almost covered all the classical conforming elements. In this paper, we will use these operators to reconstruct CONV for conforming elements.

One motivation for our methods is that, the CONV formulation not only has the easiest form but also usually shows good performance before the scheme blows up due to the energy instability (e.g., see the comparison experiments in [7]). In our opinion, it has the potential to simulate a problem accurately and the divergence-free reconstruction is one of the keys to unlock this potential. Here we focus on unsteady NSEs and give some theoretical analysis of the reconstructed CONV formulation. In what follows, we shall refer to it simply as “modified CONV” sometimes. We prove that modified CONV conserves kinetic energy, linear momentum, total vorticity, 2D enstrophy and helicity under the same assumptions as EMAC [7]. Further, we also prove that the Picard linearization conserves them as well. Compared to EMAC, our formulation does not conserve angular momentum theoretically. However, the numerical experiments show that modified CONV preserves this quantity well. For the semi-discrete scheme, we prove that the Gronwall constant of the error bounds does not depend on the Reynolds number explicitly under the assumption u∈L2(0,T;W1,∞(Ω)). In this aspect a related concept is called (Re-)semi-robustness [40, 22], which is a type of robustness that the constants (including Gronwall constant) in velocity error estimates do not explicitly depend on the inverse of the viscosity. For Re-semi-robust methods/analysis, we refer to [42, 41, 40, 6, 11, 12, 16].

The rest of this paper is organized as follows. In Section 2 we state the reconstructed scheme and discuss the conservative properties and error estimates of the semi-discrete scheme. Section 3 is devoted to investigating the conservative properties of Picard linearization, matching the Crank-Nicolson time stepping method. Section 4 studies some numerical experiments.

Let Th be shape-regular partitions of Ω [9] and h=maxT∈ThhT with hT the diameter of element T. Let V=H10(Ω), W=L20(Ω) and Vh×Wh∈V×W denotes a pair of inf-sup stable finite element spaces on Th. Here we do not give them a concrete definition first.

A continuous variational form for eq. 1.1 is: equationparentequation

for any u,v,w∈V and q∈W. Here the trilinear form c(⋅,⋅,⋅) is the so-called convective formulation (CONV).

Let u∗ be the velocity solution of eq. 2.1 or eq. 2.2. Introduce the kinetic energy:

The following identity is widely used in energy-stability analysis:

Equation 2.3 gives a skew-symmetric structure for ‘‘v" and ‘‘w" in c(⋅,⋅,⋅) when ‘‘u" is divergence-free. Based on this fact, one could further prove that the continuous velocity is energy-stable in eq. 2.1. In the discrete level, however, the divergence constraint is usually relaxed for most of the classical elements such as the Bernardi-Raugel elements [4] and the Taylor-Hood elements [18, 5]. Then the skew-symmetric structure loses. The discretely divergence-free subspace of Vh is defined by

To fix the lack of skew-symmetry, one commonly used method is to modify the CONV formulation into the following SKEW formulation:

However, Olshanskii and Rebholz [36] showed that the SKEW formulation might give a poor accuracy for long time simulations with higher Reynolds number. In this paper, we consider another skew-symmetrization way for CONV, where we shall use the divergence-free projection operators.

the unit external normal vector on

Γ. Denote by Πh:Vh→H0(div;Ω) a generic divergence-free projection operator, which may be different for different space pairs. Introduce a corresponding finite element space Xh⊂H0(div;Ω) such that ΠhVh⊆Xh. Here we assume that Πh has the following properties:

For most cases, the inequality in Assumption 1 ➁ can be obtained by a combination of the L2 approximation property of Πh, the inverse inequality and triangle inequality.

We consider the reconstructed scheme: Find (uh,ph):(0,T]→Vh×Wh such that equationparentequation

The following lemma is very essential for our analysis.

Lemma 1 can be regarded as a special case of the skew-symmetric discontinuous Galerkin formulation (see, e.g., [13, Lemma 6.39]). Here for completeness we reprove this special case. To make the proof process more clear, we will derive it in the component form. Let (v1,v2,...,vd) denotes the component form of any vh∈L2(Ω). We have

The integration by parts on each element T gives

where ni denotes the i-th component of the unit external normal vector of T, n. A combination of the continuity and boundary conditions of uh,vh and wh implies that

and the first condition in Lemma 1 gives

By Lemma 1 and Assumption 1 one can obtain

In this subsection, we focus on the conservative properties of the modified method eq. 2.7. First, let us give the definitions of momentum, angular momentum, helicity, enstrophy and vorticity. Denote by u∗ the exact velocity in eq. 1.1 or the discrete velocity in eq. 2.7. Let w∗=curlu∗ when u∗ represents the continuous solution; let w∗ be the solution of some finite element discretization of the Navier-Stokes vorticity equation (see eq. 2.14 and eq. 2.15 below) when u∗ is the discrete velocity. Note that the operator curl in two dimensions denotes a scalar operator [18]. Then we define

When ν=0 and f=0, one can similarly obtain 12ddt∥uh∥2=0. In this case, kinetic energy is conserved by our method.

To analysis the conservative properties of the other quantities, we need some extra assumptions, which are similar to the EMAC analysis [7].

The exact solution (u,p), the discrete solution (uh,ph) and the source term f are only supported on a sub-domain ^Ω⊂Ω such that there exists restriction χ(g)∈Vh for g=ei,x×ei with χ(g)=g in ^Ω and χ(g)=0 on Γ. Here ei represents the i-th usual basis of Rd.

We divide the proof of the above theorem into several subsections.

Then the conservation of momentum follows.

Here we apply the fact that ∇⋅(x×ei)=0 and Δ(x×ei)=0. Assuming that f has zero angular momentum, i.e., (f,x×ei)=0, the above equation gives that ddt(uh,x×ei)=ch(uh,x×ei,uh)=−(Πhuh×uh,ei)≠0, since Πhuh≠uh in general. Thus angular momentum is not preserved by our methods.

Let w be the curl of the exact solution u: w=∇×u. Note that ∇⋅w=0. In two dimensions, w represents a scalar and we use the symbol w to denote it. Taking the curl operator on eq. 1.1a gives the following Navier-Stokes vorticity equations:

For the discrete case, we apply the strategy in [35, 7]. Here we do not analyze the quantity wh=curluh for the discrete solution uh. We consider a sightly altered virticity wh which is a solution of some direct discretization of eq. 2.14. As it was said in [7], ‘this discrete vorticity still depends on the computed velocity uh, but more implicitly, through the equation coefficients’. We further assume vorticity also vanishes on and near the boundary due to Assumption 2. The corresponding finite element methods to eq. 2.14 reads: Find wh:(0,T]→Vh and the Lagrange multifier ηh:(0,T]→Wh such that

where we use the property eq. 2.12. Thus helicity is also conserved.

Thus we prove the conservative property of the 2D enstrophy.

in the case where ν=0 and f=0. Note that the exact vorticity w satisfies

There is a little difference between the continuous case eq. 2.21 and the discrete case eq. 2.20 formally.

which implies that the total vorticity is conserved.

Denote by ΠSh:H10(Ω)→V0h the Stokes projection which satisfies that

To satisfy the estimate eq. 2.26, some extra conditions might be required. For example, the domain Ω is convex. For the concrete analysis of eq. 2.26, we refer the readers to the paper [17]. Let

The following error equation will be used in error analysis.

The above equation can be further rewritten as

Then the Cauchy-Schwarz inequality, Equation 2.26 and the Young’s inequality give that

Then integrating over (0,T] and using the Gronwall inequality and Hölder inequality we finally obtain

Finally, the estimate eq. 2.29 follows immediately from eq. 2.39 and the triangle inequality. ∎

In practice, a commonly used linearization way is replacing one of the velocity solutions of the nonlinear term with last time step solutions. In this section we prove that this way preserves all the conservative properties from the semi-discrete version when matching the Crank-Nicolson time discretizations. The linearized Crank-Nicolson scheme is that