Lolisa: Formal Syntax and Semantics for a Subset of the Solidity Programming Language

This article presents the formal syntax and semantics for a large subset of the Solidity programming language developed for the Etheruem blockchain platform based on our resent work about developing a general, extensible, and reusable formal memory (GERM) framework and an extension of Curry-Howard isomorphism, denoted as execution-verification isomorphism (EVI). This subset is denoted as Lolisa, which, to our knowledge, is the first mechanized and validated formal syntax and semantics developed for Solidity. The formal syntax of Lolisa adopts a stronger static type system than Solidity for enhanced type safety. In addition, Lolisa not only includes nearly all the syntax components of Solidity, such as mapping, modifier, contract, and address types, but it also contains general-purpose programming language features, such as multiple return values, pointer arithmetic, struct, and field access. Therefore, the inherent compatibility of Lolisa allows Solidity programs to be directly translated into Lolisa with a line-by-line correspondence without rebuilding or abstracting, and, in addition, the inherent generality of Lolisa allows it to be extended to express other programming languages as well. To this end, we also present a preliminary scheme for extending Lolisa to other languages systematically. 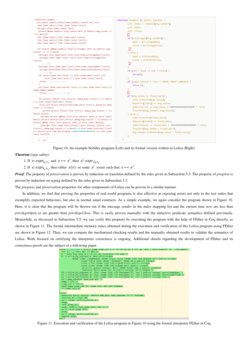 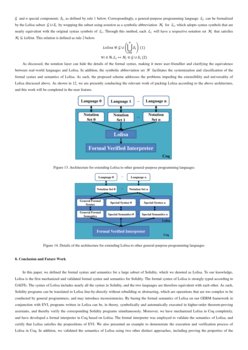 Budge: a programming language and a theorem prover

Probabilistic Programming with Densities in SlicStan: Efficient, Flexible and Deterministic

Stan is a probabilistic programming language that has been increasingly ...
Maria I. Gorinova, et al. ∙

Lupa: A Framework for Large Scale Analysis of the Programming Language Usage

In this paper, we present Lupa - a framework for large-scale analysis of...
Anna Vlasova, et al. ∙

We report on the experience of developing Merlin, a language server for ...
Frédéric Bour, et al. ∙