Taking an algebraic perspective on the basic structures of Rough Concept Analysis as the starting point, in this paper we introduce some varieties of lattices expanded with normal modal operators which can be regarded as the natural rough algebra counterparts of certain subclasses of rough formal contexts, and introduce proper display calculi for the logics associated with these varieties which are sound, complete, conservative and with uniform cut elimination and subformula property. These calculi modularly extend the multi-type calculi for rough algebras to a `nondistributive' (i.e. general lattice-based) setting. 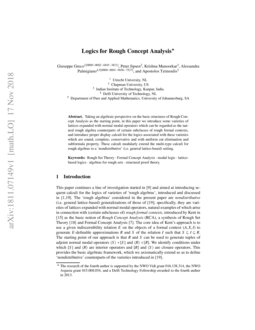 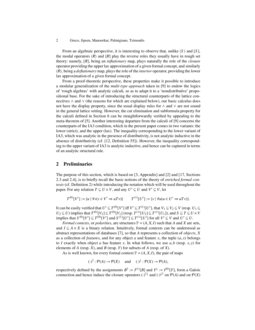 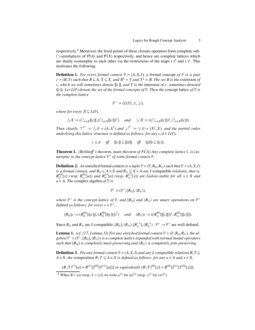 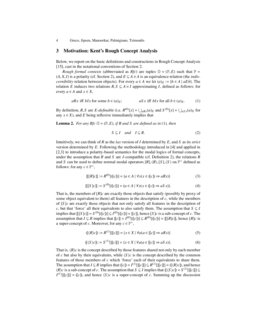 This paper continues a line of investigation started in [9] and aimed at introducing sequent calculi for the logics of varieties of ‘rough algebras’, introduced and discussed in [1, 19]. The ‘rough algebras’ considered in the present paper are nondistributive (i.e. general lattice-based) generalizations of those of [19]; specifically, they are varieties of lattices expanded with normal modal operators, natural examples of which arise in connection with (certain subclasses of) rough formal contexts, introduced by Kent in [15] as the basic notion of Rough Concept Analysis (RCA), a synthesis of Rough Set Theory [18] and Formal Concept Analysis [7]. The core idea of Kent’s approach is to use a given indiscernibility relation E on the objects of a formal context (A,X,I) to generate E-definable approximations R and S of the relation I such that S⊆I⊆R. The starting point of our approach is that R and S can be used to generate tuples of adjoint normal modal operators ⟨S⟩⊣[S] and ⟨R⟩⊣[R]. We identify conditions under which [S] and ⟨R⟩ are interior operators and [R] and ⟨S⟩ are closure operators. This provides the basic algebraic framework, which we axiomatically extend so as to define ‘nondistributive’ counterparts of the varieties introduced in [19].

From an algebraic perspective, it is interesting to observe that, unlike ⟨S⟩ and [S], the modal operators ⟨R⟩ and [R] play the reverse roles they usually have in rough set theory: namely, [R], being an inflationary map, plays naturally the role of the closure operator providing the upper lax approximation of a given formal concept, and similarly ⟨R⟩, being a deflationary map, plays the role of the interior operator, providing the lower lax approximation of a given formal concept.

From a proof-theoretic perspective, these properties make it possible to introduce a modular generalization of the multi-type approach taken in [9] to endow the logics of ‘rough algebras’ with analytic calculi, so as to adapt it to a ‘nondistributive’ propositional base. For the sake of introducing the structural counterparts of the lattice connectives ∧ and ∨ (the reasons for which are explained below), our basic calculus does not have the display property, since the usual display rules for ∧ and ∨ are not sound in the general lattice setting. However, the cut elimination and subformula property for the calculi defined in Section 6 can be straightforwardly verified by appealing to the meta-theorem of [5]. Another interesting departure from the calculi of [9] concerns the counterparts of the IA3 condition, which in the present paper comes in two variants: the lower (strict), and the upper (lax). The inequality corresponding to the lower variant of IA3, which was analytic in the presence of distributivity, is not analytic inductive in the absence of distributivity (cf. [12, Definition 55]). However, the inequality corresponding to the upper variant of IA3 is analytic inductive, and hence can be captured in terms of an analytic structural rule.

The purpose of this section, which is based on [3, Appendix] and [2] and [17, Sections 2.3 and 2.4], is to briefly recall the basic notions of the theory of enriched formal contexts (cf. Definition 2) while introducing the notation which will be used throughout the paper. For any relation T⊆U×V, and any U′⊆U and V′⊆V, let

Formal contexts, or polarities, are structures P=(A,X,I) such that A and X are sets, and I⊆A×X is a binary relation. Intuitively, formal contexts can be understood as abstract representations of databases [7], so that A represents a collection of objects, X as a collection of features, and for any object a and feature x, the tuple (a,x) belongs to I exactly when object a has feature x. In what follows, we use a,b (resp. x,y) for elements of A (resp. X), and B (resp. Y) for subsets of A (resp. of X).

As is well known, for every formal context P=(A,X,I), the pair of maps

respectively defined by the assignments B↑:=I(1)[B] and Y↓:=I(0)[Y], form a Galois connection and hence induce the closure operators (⋅)↑↓ and (⋅)↓↑ on P(A) and on P(X) respectively.111When B={a} (resp. Y={x}) we write a↑↓ for {a}↑↓ (resp. x↓↑ for {x}↓↑). Moreover, the fixed points of these closure operators form complete sub-⋂-semilattices of P(A) and P(X) respectively, and hence are complete lattices which are dually isomorphic to each other via the restrictions of the maps (⋅)↑ and (⋅)↓. This motivates the following

Then clearly, ⊤P+:=⋀∅=(A,A↑) and ⊥P+:=⋁∅=(X↓,X), and the partial order underlying this lattice structure is defined as follows: for any c,d∈L(P),

(Birkhoff’s theorem, main theorem of FCA) Any complete lattice L is isomorphic to the concept lattice P+ of some formal context P.

where P+ is the concept lattice of P, and [R□] and ⟨R◊⟩ are unary operations on P+ defined as follows: for every c∈P+,

(cf. [17, Lemma 3]) For any enriched formal context F=(P,R□,R◊), the algebra F+=(P+,[R□],⟨R◊⟩) is a complete lattice expanded with normal modal operators such that [R□] is completely meet-preserving and ⟨R◊⟩ is completely join-preserving.

For any formal context P=(A,X,I) and any I-compatible relations R,T⊆A×X, the composition R;T⊆A×X is defined as follows: for any a∈A and x∈X,

Below, we report on the basic definitions and constructions in Rough Concept Analysis [15], cast in the notational conventions of Section 2.

Rough formal contexts (abbreviated as Rfc) are tuples G=(P,E) such that P=(A,X,I) is a polarity (cf. Section 2), and E⊆A×A is an equivalence relation (the indiscernibility relation between objects). For every a∈A we let (a)E:={b∈A∣aEb}. The relation E induces two relations R,S⊆A×I approximating I, defined as follows: for every a∈A and x∈X,

Intuitively, we can think of R as the lax version of I determined by E, and S as its strict version determined by E. Following the methodology introduced in [4] and applied in [2, 3] to introduce a polarity-based semantics for the modal logics of formal concepts, under the assumption that R and S are I-compatible (cf. Definition 2), the relations R and S can be used to define normal modal operators [R],⟨R⟩,[S],⟨S⟩ on P+ defined as follows: for any c∈P+,

That is, ⟨R⟩c is the concept described by those features shared not only by each member of c but also by their equivalents, while ⟨S⟩c is the concept described by the common features of those members of c which ‘force’ each of their equivalents to share them. The assumption that I⊆R implies that ([c])=I(1)[[[c]]]⊆R(1)[[[c]]]=([⟨R⟩c]), and hence ⟨R⟩c is a sub-concept of c. The assumption that S⊆I implies that ([⟨S⟩c])=S(1)[[[c]]]⊆I(1)[[[c]]]=([c]), and hence ⟨S⟩c is a super-concept of c. Summing up the discussion above, we have verified that the conditions I⊆R and S⊆I imply that the following sequents of the modal logic of formal concepts are valid on Kent’s basic structures:

where □s is interpreted as [S], □ℓ as [R], ◊s as ⟨S⟩ and ◊ℓ as ⟨R⟩. Translated algebraically, these conditions say that □s and ◊ℓ are deflationary, as interior operators are, ◊s and □ℓ are inflationary, as closure operators are. Hence, it is natural to ask under which conditions they (i.e. their semantic interpretations) are indeed closure/interior operators. The next definition and lemma provide answers to this question.

By the general theory developed in [4] and applied to enriched formal contexts in [17, Proposition 5], properties (8) guarantee that the following sequents of the modal logic of formal concepts are also valid on amenable Rfc’s:

Finally, again by [17, Proposition 5], the fact that by construction □s and ◊s (resp. □ℓ and ◊ℓ) are interpreted by operations defined in terms of the same relation guarantees the validity of the following sequents on amenable Rfc’s:

Axioms (7), (9) and (10) constitute the starting point and motivation for the proof-theoretic investigation of the logics associated to varieties of algebraic structures which can be understood as abstractions of amenable Rfc’s. We define these varieties in the next section.

In the present section, we introduce basic Kent algebras (and the variety of abstract Kent algebras (aKa) to which they naturally belong), as algebraic generalizations of amenable Rfc’s, and then introduce some subvarieties of aKas in the style of [19].

A basic Kent algebra is a structure A=(L,□s,◊s,□ℓ,◊ℓ) such that L is a complete lattice, and □s,◊s,□ℓ,◊ℓ are unary operations on L such that for all a,b∈L,

We let KA+ denote the class of basic Kent algebras.

where P+ is the concept lattice of the formal context P and [S],⟨S⟩,[R],⟨R⟩ are defined as in (3)–(6). The following proposition is an immediate consequence of [17, Proposition 5], using Lemmas 2 and 3, and the fact that [R] and ⟨R⟩ (resp. [S] and ⟨S⟩) are defined using the same relation.

Interestingly, the third and fourth inequality in (18) are not analytic inductive (cf. [12, Definition 55]); however, they are equivalent to analytic inductive inequalities in the multi-type language of the heterogeneous algebras discussed in the next section.

Similarly to what holds for rough algebras (cf. [9, Section 3]), since the modal operations of any aKa A=(L,□s,◊s,□ℓ,◊ℓ) are either interior operators or closure operators, each of them factorizes into a pair of adjoint normal modal operators which are retractions or co-retractions, as illustrated in the following table:

Again similarly to what observed in [9], the lattice structure of L can be exported to each of the sets SI,SC,LC and LI via the corresponding pair of modal operators as follows.

For any aKa A, the strict interior kernel SI=(SI,∪I,∩I,tI,fI) and the strict closure kernel SC=(SC,∪C,∩C,tC,fC) are such that, for all α,β∈SI, and all δ,γ∈SC,

The lax interior kernel and the lax closure kernel are such that, for all π,ξ∈LI, and all σ,τ∈LC,

Similarly to what observed in [9], it is easy to verify that the algebras defined above are lattices, and the operations indicated with a circle (either black or white) are lattice homomorphisms (i.e. are both normal box-type and normal diamond-type operators). The construction above justifies the following definition of class of heterogeneous algebras equivalent to aKas:

A heterogeneous aKa (haKa) is a tuple

The haKas corresponding to the varieties of Definition 7 are defined as follows:

Similarly to what discussed in [9, Section 3], one can readily show that the classes of haKas defined above correspond to the varieties defined in Section 4. That is, for any aKa A one can define its corresponding haKa A+ using the factorizations described at the beginning of the present section and Definition 8, and conversely, given a haKa H, one can define its corresponding aKa H+ by endowing its first domain L with modal operations defined by taking the appropriate compositions of pairs of heterogeneous maps of H. Then, for every K∈{aKa, aKa5’, K-IA3s, K-IA3ℓ}, letting HK denote its corresponding class of heterogeneous algebras, the following holds:

6 Multi-type calculi for the logics of Kent algebras

In the present section, we introduce the multi-type calculi associated with each class of algebras K∈{aKa,aKa5′,K-IA3ℓ}. The language of these logics matches the language of haKas, and is built up from structural and operational (i.e. logical) connectives. Each structural connective is denoted by decorating its corresponding logical connective with ^a (resp. ˇa or ~a). In what follows, we will adopt the convention that unary connectives bind more strongly than binary ones.