Here we suppose that the observed random variable has cumulative distribution function F with regularly varying tail, i.e. 1-F ∈ RV_-α, α > 0. Using the results about exponential order statistics we investigate logarithms of ratios of two order statistics of a sample of independent observations on Pareto distributed random variable with parameter α. Short explicit formulae for its mean and variance are obtained. Then we transform this function in such a way that to obtain unbiased, asymptotically efficient, and asymptotically normal estimator for α. Finally we simulate Pareto samples and show that in the considered cases the proposed estimator outperforms the well known Hill, t-Hill, Pickands and Deckers-Einmahl-de Haan estimators. 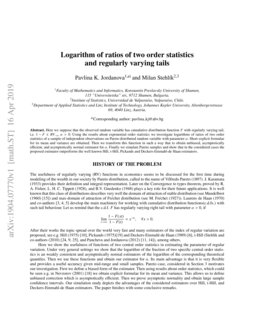 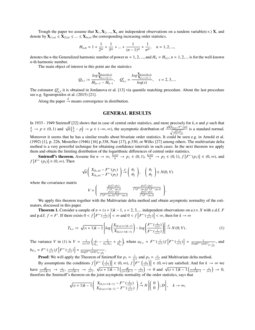 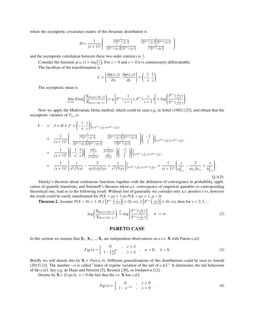 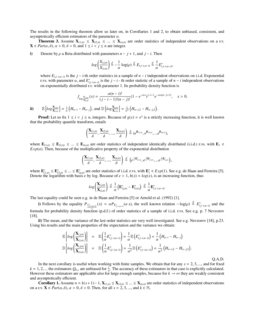 1 History of the Problem

The usefulness of regularly varying (RV) functions in economics seems to be discussed for the first time during modeling of the wealth in our society by Pareto distribution, called to the name of Vilfredo Pareto (1897). J. Karamata (1933) provides their definition and integral representation. Later on the Convergence to types theorem, proved by R. A. Fisher, L. H. C. Tippett (1928), and B.V. Gnedenko (1948) plays a key role for their future applications. It is well known that this class of distributions describes very well the domain of attraction of stable distribution (see Mandelbrot (1960) [15]) and max-domain of attraction of Fr´echet distribution (see M. Fr´echet (1927)). Laurens de Haan (1970) and co-authors [3, 4, 5] develop the main machinery for working with cumulative distribution functions(c.d.fs.) with such tail behaviour. Let us remind that the c.d.f. F has regularly varying right tail with parameter α>0, if

Here we show the usefulness of functions of two central order statistics in estimating the parameter of regular variation. Under very general settings we show that the logarithm of the fraction of two specific central order statistics is an weakly consistent and asymptotically normal estimators of the logarithm of the corresponding theoretical quantiles. Then we use these functions and obtain our estimator for

α. Its main advantage is that it is very flexible and provides a useful accuracy given mid-range and small samples. Pareto case, considered in Section 3 motivates our investigation. First we define a biased form of the estimator. Then using results about order statistics, which could be seen e.g. in Nevzorov (2001) [18]

we obtain explicit formulae for its mean and variance. This allows us to define unbiased correction which is asymptotically efficient. Then we prove asymptotic normality and obtain large sample confidence intervals. Our simulation study depicts the advantages of the considered estimators over Hill, t-Hill, and Deckers-Einmahl-de Haan estimators. The paper finishes with some conclusive remarks.

Trough the paper we assume that X1,X2,...,Xn are independent observations on a random variable(r.v.) X, and denote by X(1,n)≤X(2,n)≤...≤X(n,n) the corresponding increasing order statistics.

The main object of interest in this point are the statistics

The estimator Q∗k,3 it is obtained in Jordanova et al. [13] via quantile matching procedure. About the last procedure see e.g. Sgouropoulos et al. (2015) [21].

Along the paper d→ means convergence in distribution.

where the covariance matrix

We apply this theorem together with the Multivariate delta method and obtain asymptotic normality of the estimators, discussed in this paper.

Proof: We will apply the Theorem of Smirnoff for p1=1s+1 and p2=ss+1 and Multivariate delta method.

where the asymptotic covariance matrix of this bivariate distribution is

and the asymptotic correlation between these two order statistics is 1s.

Consider the function g(x,y)=log(yx). For x>0 and y>0 it is continuously differentiable.

The Jacobian of the transformation is

The asymptotic mean is

Now we apply the Multivariate Delta method, which could be seen e.g. in Sobel (1982) [23], and obtain that the asymptotic variance of Tk,s is

Slutsky’s theorem about continuous functions together with the definition of convergence in probability, application of quantile transform, and Smirnoff’s theorem about a.s. convergence of empirical quantiles to corresponding theoretical one, lead us to the following result. Without lost of generality we consider only a.s. positive r.vs, however the result could be easily transformed for

In this section we assume that X1,X2,...,Xn are independent observations on a r.v. X with Pareto c.d.f.

Briefly we will denote this by X∈Par(α,δ). Different generalizations of this distributions could be seen in Arnold (2015) [2]. The number −α is called ”index of regular variation of the tail of c.d.f.”. It determines the tail behaviour of the c.d.f. See e.g. de Haan and Ferreira [5], Resnick [20], or Jordanova [12].

The results in the following theorem allow us later on, in Corollaries 1 and 2, to obtain unbiased, consistent, and asymptotically efficient estimators of the parameter α.

a Beta distributed with parameters

. Its probability density function is

Proof: Let us fix 1≤i<j≤n, integers. Because of g(x)=ex is a strictly increasing function, it is well known that the probability quantile transform, entails

where E(1,n)≤E(2,n)≤...≤E(n,n) are order statistics of independent identically distributed (i.i.d.) r.vs. with E1∈Exp(α). Then, because of the multiplicative property of the exponential distribution

ii) The mean, and the variance of the last order statistics are very well investigated. See e.g. Nevzorov [18], p.23. Using his results and the main properties of the expectation and the variance we obtain:

In the next corollary is useful when working with finite samples. We obtain that for any s=2,3,..., and for fixed k=1,2,... the estimators Qk,s are unbiased for 1α. The accuracy of these estimators in that case is explicitly calculated. However these estimators are applicable also for large enough samples, because for k→∞ they are weakly consistent and asymptotically efficient.

Denote by ρ a Beta distributed with parameters k, and (s−1)k. Then

The estimator Qk,s is asymptotically efficient. For k→∞,

The estimator Qk,s is weekly consistent. More precisely, for all ε>0, limk→∞P[∣∣Qk,s−1α∣∣>ε]=0.

Proof: i) and ii) follow by Theorem 1, definition of Qk,s and the relations

iii) is corollary of ii) and Chebyshev’s inequality.

In the last equality we have used the well known solution of the Basel problem, and more precisely the limit limn→∞Hn,2=π26.

In the previous proof we have seen that for any fixed s=2,3,..., limk→∞(Hks−1−Hk−1)=log(s). Therefore, although Q∗k,s are biased, they are asymptotically unbiased, asymptotically normal, weakly consistent and asymptotically efficient estimators for 1α. The next conclusions follow by the relation Q∗k,s=Qk,s(Hks−1−Hk−1)log(s), and the main properties of the mean and the variance.

Denote by ρ a Beta distributed with parameters k, and (s−1)k. Then, for all k∈N,

Now we are ready to compute the corresponding confidence intervals. Let us chose α0∈(0,1) and denote by z1−α02, 1−α02

9), and the definition of Q∗k,s we obtain