This paper introduces an efficient procedure to localize user-defined points on the surface of deformable objects and track their positions in 3D space over time. To cope with a deformable object's infinite number of DOF, we propose a discretized deformation field, which is estimated during runtime using a multi-step non-linear solver pipeline. The resulting high-dimensional energy minimization problem describes the deviation between an offline-defined reference model and a pre-processed camera image. An additional regularization term allows for assumptions about the object's hidden areas and increases the solver's numerical stability. Our approach is capable of solving the localization problem online in a data-parallel manner, making it ideally suitable for the perception of non-rigid objects in industrial manufacturing processes. 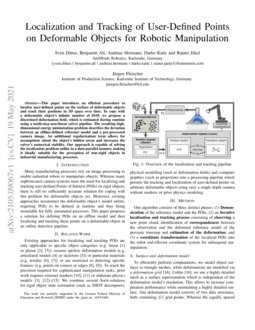 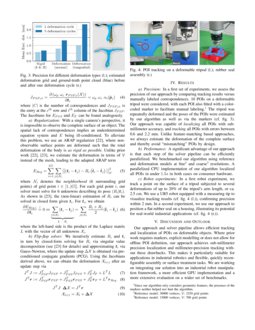 Many manufacturing processes rely on image processing to enable industrial robots to manipulate objects. Whereas many sophisticated camera systems meet the need for localizing and tracking user-defined Points of Interest on rigid objects, there is still no sufficiently accurate solution for coping with this problem for deformable objects yet. Moreover, existing approaches reconstruct the deformable object‘s model online, requiring POIs to be defined at runtime and thus being unsuitable for fully automated processes. This paper proposes a solution for defining POIs on an offline model and then localizing and tracking these points on a deformable object in an online detection pipeline.

Our algorithm consists of three distinct phases: (1) Demonstration of the reference model and the POIs; (2) an iterative localization and tracking process consisting of observing a new point cloud, identification of correspondences between the observation and the deformed reference model of the previous timestep and estimation of the deformation; and (3) a coordinate transformation of the localized POIs into the robot end-effector coordinate system for subsequent manipulation.

To efficiently perform computations, we model object surfaces as triangle meshes, while deformations are modelled via a deformation grid [Innmann.2016]. Unlike [Innmann.2016], we use a highly detailed mesh as a surface representation which is independent of the deformation model’s resolution. This allows to increase computation performance while maintaining a highly detailed surface. Our deformation model consists of two data structures, both containing |G| grid points. Whereas the equally spaced static grid G describes the undeformed reference model, the deformation field V represents the object’s deformed state at the current timestep t. Each gridpoint i is defined in G

by a position vector

^ti, allowing to express the position ^p of an undeformed vertex within G as ^p=∑|G|i=1αi^ti with trilinear weights αi∈[0,1] (cf. fig. 2). The position p of the same vertex in the deformation field V can be described analogously by a weighted sum of deformed gridpoint positions ti as p=∑|G|i=1αiti. We define an observation D as an organized point cloud of the deformed object.

Most SotA approaches use either a low-resolution reference model of the deformable object [Zollhofer.2014] or none at all [Newcombe.2015, Innmann.2016]. To allow for user demonstrations of POIs, our algorithm requires a high-detail reference model to be created offline. To improve the stability of our solver, we limit the object’s initial deformation with respect to its reference model by demonstrating a library L of reference models in an offline step. Each model in L is a triangle mesh of the object in a distinct deformation state. The models are generated by fusing several depth images into a Truncated Signed Distance Field (TSDF) and then extracting the triangles via the MarchingCubes algorithm [Lorensen.1987]. After the demonstration of the reference models, the user can select relevant POIs on the meshed surface via a graphical user interface. At runtime, after the first observation D, the model in L most similar to D is used to initialize G.

Result from projecting each surface point pc of the deformed reference model into the image plane and comparing it to the corresponding point pac that has been measured. The quality of a point-to-point (P2P)-correspondence can be described by a weight wc=(wd+wn+wv3)2 where wd denotes the distance between projected point pc and its correspondent pac, wn the distance between pc’s normal nc and its correspondent nac, and wv the angle between the camera view direction v and nc.

Projective correspondences such as P2P

typically only yield approximate, not exact, correspondences. p2s-correspondences add another degree of freedom by associating a point in the model to a

plane in the observation, defined by the P2P-correspondence pac and its normal nac. During deformation estimation, this allows to only minimize the distance dc along the normal.

Unlike projective correspondences, correspondences based on feature matching can detect large deformations, tangential movements and rotations of the object out of the image plane. Prior work [Guo.2016, Hansch.2014]

and our own experiments have found the PFH and FPFH descriptors to be highly sensitive and specific but to scale poorly with the size of the point cloud, while SHOT descriptors scale linearly and are robust against outliers. We implement feature correspondences using SHOT, as its sensitivity suffices for most real-world applications.

The interpretation of correspondences as error terms E allows to formulate the deformation estimation of X as an energy minimization problem, which is also suggested by [Innmann.2016, Zollhofer.2014, Newcombe.2015]. This optimization can be regarded as a model regression problem and solved by existing solvers:

[Zollhofer.2014] and [Innmann.2016] solve a similar high-dimensional nonlinear optimization problem by linearizing the model and using the Gauss-Newton method, incurring a significant overhead for the computation of the Jacobian J. [Innmann.2016] splits the optimization into a two-stage process composed of a fixed registration followed by a deformation estimation. We leverage the fact observed in [Sorkine.2007] that the deformation estimation can again be split into two independent sub-problems, which allows to solve for nonlinear rotations and linear translations using iterative Gauss-Newton on each subproblem in turn (“flip-flop” strategy). We perform fixed registration, the estimation of a global transformation (t,R), via Prerejective RANSAC (PSC). For the deformation estimation, setting up the Jacobian for the error terms of the three correspondence types is straightforward:

where |C| is the number of correspondences and JP2P,ci is the entry at the cth row and ith column of the Jacobian JP2P. The Jacobians for EP2S and EF can be found analogously.

With a single camera’s perspective, it is impossible to observe the complete surface of an object. The spatial lack of correspondences implies an underdetermined equation system and E being ill-conditioned. To alleviate this problem, we use an ARAP regularizer [Sorkine.2007], where non-observable surface points are deformed such that the total deformation of the body is as rigid as possible. Unlike prior work [Sorkine.2007, Sorkine.2017], we estimate the deformation in terms of V instead of the mesh, leading to the adapted ARAP term

where Ni denotes the neighborhood (6 surrounding grid points) of grid point i∈[1,|G|]. For each grid point i, our solver must solve for 6 unknowns describing its pose (Ri|ti). As shown in [Sorkine.2017], the (non-linear) estimation of Ri can be solved in closed form given ti. For ti, we obtain

where the left-hand side is the product of the Laplace matrix L with the vector of all unknowns Xi.

[Sorkine.2017] for details) and approximating ti via Gauss-Newton, where the update step ΔX is obtained via preconditioned conjugate gradients (PCG). Using the Jacobians derived above, we can obtain the deformation Xt+1 after an update step via

In a first set of experiments, we assess the precision of our approach by comparing tracking results versus manually labeled correspondences. 10 POIs on a deformable tripod were considered, with each POI also fitted with a color-coded marker to facilitate manual labeling.111Since our algorithm only considers geometric features, the presence of the markers neither helped nor hurt the algorithm. The tripod was repeatedly deformed and the poses of the POIs were estimated by our algorithm as well as via the markers (cf. fig. 3). Our approach was capable of localizing all POIs with sub-millimeter accuracy, and tracking all POIs with errors between 0.6 and 2.2 mm. Unlike feature-matching based approaches, we always estimate the deformation of the complete surface and thereby avoid “mismatching” POIs by design.

A significant advantage of our approach is that each step of the solver pipeline can be efficiently parallelized. We benchmarked our algorithm using reference and deformation models at fine222Reference model: 30000 vertices, V: 3250 grid points and coarse333Reference model: 15000 vertices, V: 700 grid points resolutions. A parallelized CPU implementation of our algorithm localized all POIs in under 1.5s in both cases on consumer hardware.

In a first robot experiment, we track a point on the surface of a tripod subjected to several deformations of up to 20% of the tripod’s arm length, or ca. 2.5 cm. We use a UR5 robot equipped with a measuring tip to visualize tracking results (cf. fig. 4 (l.)), confirming precision within 2 mm. In a second experiment, we use our approach to position a flat rubber seal on a housing, illustrating its potential for real-world industrial applications (cf. fig. 4 (r.)).

Our approach and solver pipeline allows efficient tracking and localization of POIs on deformable objects. Where prior work requires markers, explicit modelling or does not allow for offline POI definition, our approach achieves sub-millimeter precision localization and millimeter-precision tracking without these drawbacks. This makes it particularly suitable for applications in industrial robotics and flexible, quickly reconfigurable assembly or surface treatment tasks. We are working on integrating our solution into an industrial robot manipulation framework, a more efficient GPU implementation and a more extensive evaluation on a wider set of benchmarks.