GAN is one of the most popular and commonly used neural network models. When the model is large and there is a lot of data, the learning process can be delayed. The standard way out is to use multiple devices. Therefore, the methods of distributed and federated training for GANs are an important question. But from an optimization point of view, GANs are nothing more than a classical saddle-point problem: min_x max_y f(x,y). Therefore, this paper focuses on the distributed optimization of the smooth stochastic saddle-point problems using Local SGD. We present a new algorithm specifically for our problem – Extra Step Local SGD. The obtained theoretical bounds of communication rounds are Ω(K^2/3 M^1/3) in strongly-convex-strongly-concave case and Ω(K^8/9 M^4/9) in convex-concave (here M – number of functions (nodes) and K - number of iterations). 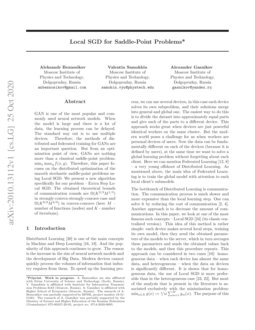 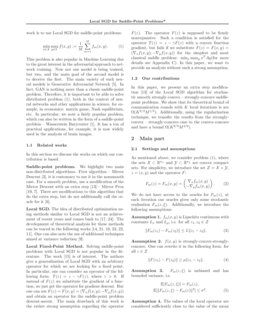 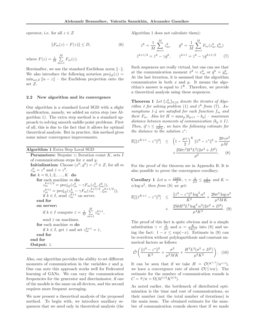 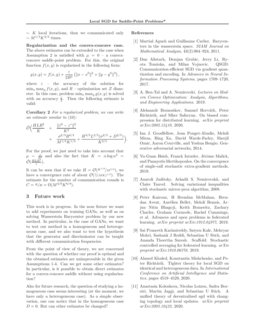 is one of the main concepts in Machine and Deep Learning

[16, 18]. And the popularity of this approach continues to grow. The reason is the increase in the size of neural network models and the development of Big Data. Modern devices cannot quickly process the volumes of information that industry requires from them. To speed up the learning process, we can use several devices, in this case each device solves its own subproblem, and their solutions merge into general and global one. The easiest way to do this is to divide the dataset into approximately equal parts and give each of the parts to a different device. This approach works great when devices are just powerful identical workers on the same cluster. But the modern world poses a challenge for us when workers are personal devices of users. Now the data can be fundamentally different on each of the devices (because it is defined by users), at the same time we want to solve a global learning problem without forgetting about each client. Here we can mention Federated Learning [12, 8] – a very young offshoot of Distributed Learning. As mentioned above, the main idea of Federated Learning is to train the global model with attention to each local client’s submodels.

The bottleneck of Distributed Learning is communication. The communication process is much slower and more expensive than the local learning step. One can solve it by reducing the cost of communication [2, 4]. Another approach is to decrease the amount of communications. In this paper, we look at one of the most famous such concepts – Local SGD [24] (its classic centralized version). This idea of this method is rather simple: each device makes several local steps, training its own model, then they send the obtained parameters of the models to the server, which in turn averages these parameters and sends the obtained values back to the models, and then this procedure repeats. This approach can be considered in two cases [10]: homogeneous data – when each device has almost the same data, and heterogeneous – when the data on devices is significantly different. It is shown that for homogeneous data, the use of Local SGD is more preferable than in the heterogeneous case [23, 22]. But most of the analysis that is present in the literature is associated exclusively with the minimization problem: minx∈Xg(x):=\nicefrac1M∑Mm=1gm(x). The purpose of this work is to use Local SGD for saddle-point problems:

This problem is also popular in Machine Learning due to the great interest in the adversarial approach to network training. Now not one model is being trained, but two, and the main goal of the second model is to deceive the first. The main variety of such neural models is Generative Adversarial Network

[5]. In fact, GAN is nothing more than a classic saddle-point problem. Therefore, it is important to be able to solve distributed problem (1), both in the context of neural networks and other applications in science, for example, in economics: matrix game, Nash equilibrium, etc. In particular, we note a fairly popular problem, which can also be written in the form of a saddle-point problem – Wasserstein Barycenter [1]. It has a ton of practical applications, for example, it is now widely used in the analysis of brain images.

In this section we discuss the works on which our contribution is based.

Saddle-point problems. We highlight two main non-distributed algorithms. First algorithm – Mirror Descent [3], it is customary to use it in the nonsmooth case. For a smooth problem, use a modification of the Mirror Descent with an extra step [13] – Mirror Prox [19, 7]. There are modifications to this algorithm that do the extra step, but do not additionally call the oracle for it [6].

Local SGD. The idea of distributed optimization using methods similar to Local SGD is not an achievement of recent years and comes back to [17, 24]. The development of theoretical analysis for these methods can be traced in the following works [14, 21, 10, 23, 22, 11]

. One can also note the use of additional techniques aimed at variance reduction

Local Fixed-Point Method. Solving saddle-point problems with Local SGD is not popular in the literature. The work [15] is of interest. The authors give a generalization of Local SGD with an arbitrary operator for which we are looking for a fixed point. In particular, one can consider an operator of the following form: T(z)=z−γF(z), where γ>0. If instead of F(z) we substitute the gradient of a function, we just get the operator for gradient descent. But one can use F(z)=F(x,y)=(∇xf(x,y);−∇yf(x,y)) and obtain an operator for the saddle-point problem descent-ascent. The main drawback of this work is the rather strong assumption regarding the operator F(z). The operator F(z) is supposed to be firmly nonexpansive. Such a condition is satisfied for the operator T(z)=z−γF(z) with a convex function gradient, but fails if we substitute F(z)=F(x,y)=(∇xf(x,y);−∇yf(x,y)) for the simplest and most classical saddle problem: minxmaxyxTAy(for more details see Appendix C). In this paper, we want to provide an analysis without such a strong assumption.

As mentioned above, we consider problem (1), where the sets X⊂Rnx and Y⊂Rny are convex compact sets. For simplicity, we introduce the set Z=X×Y, z=(x,y) and the operator F:

We do not have access to the oracles for Fm(z), at each iteration our oracles gives only some stochastic realisation Fm(z,ξ). Additionally, we introduce the following assumptions:

Assumption 1. fm(x,y) is Lipschitz continuous with constants Lx and Ly, i.e. for all z1,z2∈Z

Assumption 2. f(x,y) is strongly-convex-strongly-concave. One can rewrite it in the following form: for all z∈Z

Assumption 3. Fm(z,ξ) is unbiased and has bounded variance, i.e.

Assumption 4. The values of the local operator are considered sufficiently close to the value of the mean operator, i.e. for all z∈Z

Hereinafter, we use the standard Euclidean norm ∥⋅∥. We also introduce the following notation projZ(z)=minu∈Z∥u−z∥ – the Euclidean projection onto the set Z.

2.2 New algorithm and its convergence

Our algorithm is a standard Local SGD with a slight modification, namely, we added an extra step (see Algorithm 1). The extra step method is a standard approach to solving smooth saddle-point problems. First of all, this is due to the fact that it allows for optimal theoretical analysis. But in practice, this method gives some minor convergence improvements.

Also, our algorithm provides the ability to set different moments of communication in the variables

x and y. One can note this approach works well for Federated learning of GANs. We can vary the communication frequencies for the generator and discriminator, if one of the models is the same on all devices, and the second requires more frequent averaging.

Such sequences are really virtual, but one can see that at the communication moment ¯xk=xkm or ¯yk=ykm. At the last iteration, it is assumed that the algorithm communicates in both x and y. It means the algorithm’s answer is equal to ¯zK. Therefore, we provide a theoretical analysis using these sequences.

Let {zkm}k≥0 denote the iterates of Algorithm 1 for solving problem (1) and ¯zk from (2.2). Assumptions 1-4 are satisfied for each function fm and their Fm. Also let H=maxp|kp+1−kp| – maximum distance between moments of communication (kp∈I). Then, if γ≤16HL

, we have the following estimate for the distance to the solution

For the proof of the theorem see in Appendix B. It is also possible to prove the convergence corollary:

The proof of this fact is quite obvious and is a simple substitution γ=2μα and α=Klogα2 into (8) and using the fact: 1−x≤exp(−x). Estimate in (9) can be rewritten without polylogarithmic and constant numerical factors as follows

It can be seen that if we take H=O(\nicefracK1/3M1/3), we have a convergence rate of about O(\nicefrac1MK). The estimate for the number of communication rounds is C=\nicefracKH=Ω(M1/3K2/3).

As noted earlier, the bottleneck of distributed optimization is the time and cost of communications, so their number (not the total number of iterations) is the main issue. The obtained estimate for the number of communication rounds shows that if we made ∼K local iterations, then we communicated only ∼M1/3K2/3 times.

Regularization and the convex-concave case. The above estimates can be extended to the case when Assumption 2 is satisfied with μ=0 – a convex-concave saddle-point problem. For this, the original function f(x,y) is regularized in the following form:

where ε – the accuracy of the solution for minxmaxyf(x,y), and R – optimization set Z diameter. In this case, problem minxmaxyg(x,y) is solved with an accuracy ε2. Then the following estimate is valid:

For a regularized problem, we can write an estimate similar to (10):

For the proof, we just need to take into account that μ∼εR2 and also the fact that K=αlogα2=~O(HLR2ε).

This work is in progress. In the near future we want to add experiments on training GANs, as well as on solving Wasserstein Barycenter problem by our new method. In particular, in the case of GANs, we want to test our method in a homogeneous and heterogeneous case, and we also want to test the hypothesis that the generator and discriminator can be taught with different communication frequencies.

From the point of view of theory, we are concerned with the question of whether our proof is optimal and the obtained estimates are unimprovable in the given Assumptions 1-4. Can we get some other estimates? In particular, is it possible to obtain direct estimates for a convex-concave saddle without using regularization?

Also for future research, the question of studying a homogeneous case seems interesting (at the moment, we have only a heterogeneous case). As a simple observation, one can notice that in the homogeneous case D=0. But can other estimates be changed?

For arbitrary integer n≥1 and arbitrary set of positive numbers a1,…,an we have

Appendix B Proof of Theorem 1

We start our proof with the following lemma:

Next, we sum up the two previous equalities

Further, we need to additionally estimate two terms −2γ⟨¯gk+1/2,¯zk+1/2−z∗⟩ and ∥¯gk+1/2−¯gk∥2. For this we prove the following two lemmas, but before that we introduce the additional notation:

The following estimate is valid:

We take into account the independence of all random vectors

Using property of z∗, we have:

The following estimate is valid:

Using independence of each machine and (2.1), we get: