Laderman discovered a scheme for computing the product of two 3x3 matrices using only 23 multiplications in 1976. Since then, some more such schemes were proposed, but it remains open how many there are and whether there exist schemes with fewer than 23 multiplications. In this paper we present two independent SAT-based methods for finding new schemes. Both methods allow computing a few hundred new schemes individually, and many thousands when combined. Local search SAT solvers outperform CDCL solvers consistently in this application. 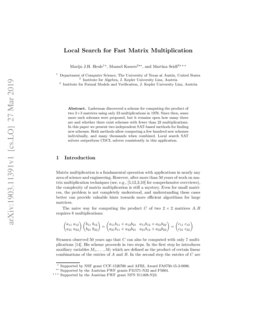 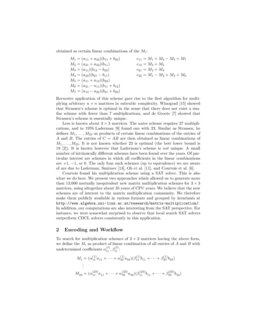 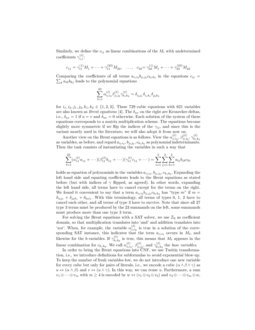 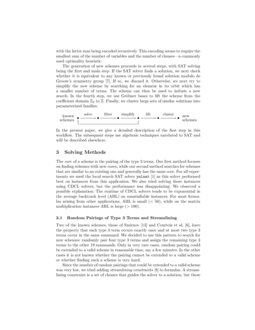 On Improving Local Search for Unsatisfiability

Matrix multiplication is a fundamental operation with applications in nearly any area of science and engineering. However, after more than 50 years of work on matrix multiplication techniques (see, e.g., [5, 12, 3, 10] for comprehensive overviews), the complexity of matrix multiplication is still a mystery. Even for small matrices, the problem is not completely understood, and understanding these cases better can provide valuable hints towards more efficient algorithms for large matrices.

Recursive application of this scheme gave rise to the first algorithm for multiplying arbitrary n×n matrices in subcubic complexity. Winograd [15] showed that Strassen’s scheme is optimal in the sense that there does not exist a similar scheme with fewer than 7 multiplications, and de Groote [7] showed that Strassen’s scheme is essentially unique.

Less is known about 3×3 matrices. The naive scheme requires 27 multiplications, and in 1976 Laderman [9] found one with 23. Similar as Strassen, he defines M1,…,M23 as products of certain linear combinations of the entries of A and B. The entries of C=AB are then obtained as linear combinations of M1,…,M23. It is not known whether 23 is optimal (the best lower bound is 19 [2]). It is known however that Laderman’s scheme is not unique. A small number of intrinsically different schemes have been found over the years. Of particular interest are schemes in which all coefficients in the linear combinations are +1, −1, or 0. The only four such schemes (up to equivalence) we are aware of are due to Laderman, Smirnov [13], Oh et al. [11], and Courtois et al. [6].

Courtois found his multiplication scheme using a SAT solver. This is also what we do here. We present two approaches which allowed us to generate more than 13,000 mutually inequivalent new matrix multiplication schemes for 3×3 matrices, using altogether about 35 years of CPU years. We believe that the new schemes are of interest to the matrix multiplication community. We therefore make them publicly available in various formats and grouped by invariants at http://www.algebra.uni-linz.ac.at/research/matrix-multiplication/. In addition, our computations are also interesting from the SAT perspective. For instance, we were somewhat surprised to observe that local search SAT solvers outperform CDCL solvers consistently in this application.

To search for multiplication schemes of 3×3 matrices having the above form, we define the Mi as product of linear combination of all entries of A and B with undetermined coefficients α(ℓ)ij,β(ℓ)ij:

Similarly, we define the cij as linear combinations of the Mi with undetermined coefficients γ(ℓ)i,j:

for i1,i2,j1,j2,k1,k2∈{1,2,3}. These 729 cubic equations with 621 variables are also known as Brent equations [4]. The δuv on the right are Kronecker-deltas, i.e., δuv=1 if u=v and δuv=0 otherwise. Each solution of the system of these equations corresponds to a matrix multiplication scheme. The equations become slightly more symmetric if we flip the indices of the γij, and since this is the variant mostly used in the literature, we will also adopt it from now on.

Another view on the Brent equations is as follows. View the α(ℓ)i1i2, β(ℓ)j1j2, γ(ℓ)k1k2 as variables, as before, and regard ai1i2,bj1j2,ck1k2 as polynomial indeterminants. Then the task consists of instantiating the variables in such a way that

holds as equation of polynomials in the variables ai1i2,bj1j2,ck1k2. Expanding the left hand side and equating coefficients leads to the Brent equations as stated before (but with indices of γ flipped, as agreed). In other words, expanding the left hand side, all terms have to cancel except for the terms on the right. We found it convenient to say that a term ai1i2bj1j2ck1k2 has “type m” if m=δi2j1+δj2k1+δk2i1. With this terminology, all terms of types 0, 1, 2 have to cancel each other, and all terms of type 3 have to survive. Note that since all 27 type 3 terms must be produced by the 23 summands on the left, some summands must produce more than one type 3 term.

For solving the Brent equations with a SAT solver, we use Z2 as coefficient domain, so that multiplication translates into ‘and’ and addition translates into ‘xor’. When, for example, the variable α(ℓ)i1i2 is true in a solution of the corresponding SAT instance, this indicates that the term ai1i2 occurs in Mℓ, and likewise for the b-variables. If γ(ℓ)k1k2 is true, this means that Mℓ appears in the linear combination for ck1k2. We call α(ℓ)i1i2, β(ℓ)j1j2, and γ(ℓ)k1k2 the base variables.

In order to bring the Brent equations into CNF, we use Tseitin transformation, i.e., we introduce definitions for subformulas to avoid exponential blow-up. To keep the number of fresh variables low, we do not introduce one new variable for every cube but only for pairs of literals, i.e., we encode a cube (α∧β∧γ) as u↔(α∧β) and v↔(u∧γ). In this way, we can reuse u. Furthermore, a sum v1⊕⋯⊕vm with m≥4 is encoded by w↔(v1⊕v2⊕v3) and v4⊕⋯⊕vm⊕w

, with the latter sum being encoded recursively. This encoding seems to require the smallest sum of the number of variables and the number of clauses—a commonly used optimality heuristic.

The generation of new schemes proceeds in several steps, with SAT solving being the first and main step. If the SAT solver finds a solution, we next check whether it is equivalent to any known or previously found solution modulo de Groote’s symmetry group [7]. If so, we discard it. Otherwise, we next try to simplify the new scheme by searching for an element in its orbit which has a smaller number of terms. The scheme can then be used to initiate a new search. In the fourth step, we use Gröbner bases to lift the scheme from the coefficient domain Z2 to Z. Finally, we cluster large sets of similar solutions into parameterized families.

In the present paper, we give a detailed description of the first step in this workflow. The subsequent steps use algebraic techniques unrelated to SAT and will be described elsewhere.

The core of a scheme is the pairing of the type 3 terms. Our first method focuses on finding schemes with new cores, while our second method searches for schemes that are similar to an existing one and generally has the same core. For all experiments we used the local search SAT solver yalsat [1] as this solver performed best on instances from this application. We also tried solving these instances using CDCL solvers, but the performance was disappointing. We observed a possible explanation: The runtime of CDCL solvers tends to be exponential in the average backtrack level (ABL) on unsatisfiable instances. For most formulas arising from other applications, ABL is small (<50), while on the matrix multiplication instances ABL is large (>100).

Two of the known schemes, those of Smirnov [13] and Courtois et al. [6], have the property that each type 3 term occurs exactly once and at most two type 3 terms occur in the same summand. We decided to use this pattern to search for new schemes: randomly pair four type 3 terms and assign the remaining type 3 terms to the other 19 summands. Only in very rare cases, random pairing could be extended to a valid scheme in reasonable time, say a few minutes. In the other cases it is not known whether the pairing cannot be extended to a valid scheme or whether finding such a scheme is very hard.

The methods presented in Section 3 enabled us to find several hundreds of solutions individually, but they were particularly effective when combined. The first method allows finding schemes that can be quite different compared to the known schemes. However, finding a scheme using that method may require a few CPU hours as most pairings of type 3 terms cannot be extended to a valid scheme that satisfies the streamlining constraints. The second method can find schemes that are very similar to known ones with a second. The neighborhood of known solutions turned out to be limited to a few hundred of new schemes.

In contrast, some of the schemes found using the first method have a large neighborhood. We approximated the size of the neighborhood of a scheme using the following experiment: Start with a given scheme S and find a neighboring scheme by randomly fixing 2/3 of the base variables. Once a neighboring scheme S′ is found, find a neighboring scheme of S′, etc. We ran this experiment on a machine with 48 cores of the Lonestar 5 cluster of Texas Advanced Computing Center. We started each experiment using 48 threads with each thread assigned a different seed. Figure 2 shows the number of different schemes (after sorting) found in 1000 seconds when starting with one of the four known schemes and a scheme that was computed from the streamlining method. Some of these different schemes are new, while others are equivalent to each other or known ones. We only assure here that they are not identical after sorting the summands.

In view of the large number of solutions we found, it is also interesting to compare them with each other. For example, if we define the support of a solution as the number of base variables set to 1

, we observe that the support seems to follow a normal distribution with mean around 160, see Fig.

3 for a histogram. We can also see that the Laderman scheme differs in many ways from all the other solutions. It is, for example, the only scheme whose core consists of four quadruples of type 3 terms. In 89% of the solutions, the core consists of four pairs of type 3 terms, about 10% of the solution have three pairs and one quadrupel, and less than 1% of the schemes have cores of the form 2-2-2-2-3 or 2-2-2-3-4.

The main result of the present paper is that the space of schemes with 23 multiplications is enormous. The many thousands of new schemes that we found may still be just the tip of the iceberg. However, we also observed that the state-of-the-art SAT solving techniques are unable to answer several other questions. This section provides four challenges for SAT solvers with increasing difficulty. For each challenge we constructed one or more formulas that are available at https://github.com/marijnheule/matrix-challenges. The challenges are hard, but they may be doable in the coming years.

Our first method combines randomly pairing the type 3 terms with streamlining constraints. The latter was required to limit the search. We expect that local search solvers can be optimized to efficiently solve the formulas without the streamlining constraints. This may result in schemes that are significantly different compared to ones we found. We prepared ten satisfiable formulas with hardcoded pairings of type 3 terms. Five of these formulas can be solved using yalsat in a few minutes. All of these formulas appear hard for CDCL solvers (and many local search solvers).

We observed that complete SAT solvers performed weakly on our matrix multiplication instances. It seems therefore unlikely that one could prove any optimality results for the product of two 3×3 matrices using SAT solvers in the near future. A more realistic challenge concerns proving unsatisfiability of some subproblems. We prepared ten formulas with 23 multiplications and hardcoded pairings of type 3 terms. We expect that these formulas are unsatisfiable.

Challenge 3: Avoiding a type 3 term in a summand.

All known schemes have the following property: each summand has at least one type 3 term. We do not know whether there exists a scheme with 23 multiplications such that one of the summands contains no type 3 term. The challenge problem blocks the existence of a type 3 term in the last summand and does not have any additional (streamlining) constraints.

Challenge 4: Existence of a scheme with 22 multiplications.

The authors acknowledge the Texas Advanced Computing Center at The University of Texas at Austin for providing HPC resources that have contributed to the research results reported within this paper.