We analyze the local Rademacher complexity of empirical risk minimization (ERM)-based multi-label learning algorithms, and in doing so propose a new algorithm for multi-label learning. Rather than using the trace norm to regularize the multi-label predictor, we instead minimize the tail sum of the singular values of the predictor in multi-label learning. Benefiting from the use of the local Rademacher complexity, our algorithm, therefore, has a sharper generalization error bound and a faster convergence rate. Compared to methods that minimize over all singular values, concentrating on the tail singular values results in better recovery of the low-rank structure of the multi-label predictor, which plays an import role in exploiting label correlations. We propose a new conditional singular value thresholding algorithm to solve the resulting objective function. Empirical studies on real-world datasets validate our theoretical results and demonstrate the effectiveness of the proposed algorithm. 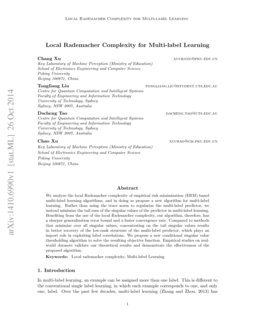 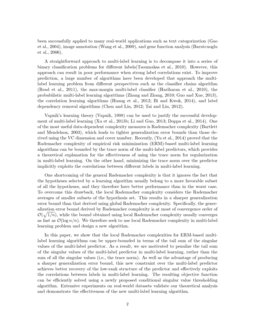 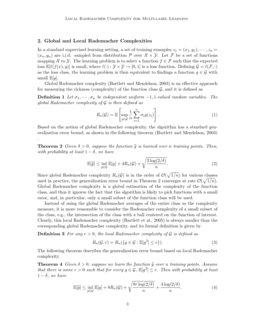 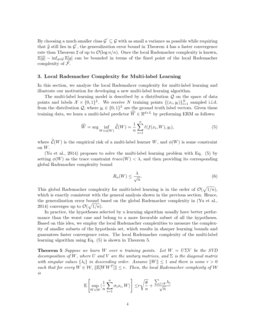 In multi-label learning, an example can be assigned more than one label. This is different to the conventional single label learning, in which each example corresponds to one, and only one, label. Over the past few decades, multi-label learning (Zhang and Zhou, 2013) has been successfully applied to many real-world applications such as text categorization (Gao et al., 2004), image annotation (Wang et al., 2009), and gene function analysis (Barutcuoglu et al., 2006).

A straightforward approach to multi-label learning is to decompose it into a series of binary classification problems for different labels(Tsoumakas et al., 2010)

. However, this approach can result in poor performance when strong label correlations exist. To improve prediction, a large number of algorithms have been developed that approach the multi-label learning problem from different perspectives such as the classifier chains algorithm

In a standard supervised learning setting, a set of training examples

is a loss function. Defining

G=ℓ(F,⋅) as the loss class, the learning problem is then equivalent to findings a function g∈G with small E[g].

Global Rademacher complexity (Bartlett and Mendelson, 2003) is an effective approach for measuring the richness (complexity) of the function class G, and it is defined as Let σ1,⋯,σn be independent uniform −1,1

G is then defined as

Based on the notion of global Rademacher complexity, the algorithm has a standard generalization error bound, as shown in the following theorem (Bartlett and Mendelson, 2003) . Given δ>0, suppose the function ˆg is learned over n

training points. Then, with probability at least

Since global Rademacher complexity Rn(G) is in the order of O(√1/n) for various classes used in practice, the generalization error bound in Theorem 2 converges at rate O(√1/n)

The following theorem describes the generalization error bound based on local Rademacher complexity. Given δ>0, suppose we learn the function ˆg over n training points. Assume that there is some r>0 such that for every g∈G, E[g2]≤r. Then with probability at least 1−δ, we have

By choosing a much smaller class G′⊆G

with as small a variance as possible while requiring that

The multi-label learning model is described by a distribution Q on the space of data points and labels X×{0,1}L. We receive N training points {(xi,yi)}Ni=1 sampled i.i.d. from the distribution Q, where yi∈{0,1}L

are the ground truth label vectors. Given these training data, we learn a multi-label predictor

ˆW∈Rd×L by performing ERM as follows:

where ˆL(W) is the empirical risk of a multi-label learner W, and ϕ(W) is some constraint on W.

(Yu et al., 2014) proposes to solve the multi-label learning problem with Eq. (5) by setting ϕ(W) as the trace constraint trace(W)<λ, and then providing its corresponding global Rademacher complexity bound

In practice, the hypotheses selected by a learning algorithm usually have better performance than the worst case and belong to a more favorable subset of all the hypotheses. Based on this idea, we employ the local Rademacher complexities to measure the complexity of smaller subsets of the hypothesis set, which results in sharper learning bounds and guarantees faster convergence rates. The local Rademacher complexity of the multi-label learning algorithm using Eq. (5) is shown in Theorem 3.

Suppose we learn W over n training points. Let W=UΣV be the SVD decomposition of W, where U and V are the unitary matrices, and Σ is the diagonal matrix with singular values {λi} in descending order. Assume ∥W∥≤1 and there is some r>0 such that for every W∈W, ∥E[WWT]∥≤r. Then, the local Rademacher complexity of W is

Considering W=UΣV, W can be rewritten as

where uj and vj are the column vectors of U and V, respectively. Based on the orthogonality of U and V, we have the following decomposition

According to Theorem 3, the local Rademacher complexity for ERM-based multi-label learning algorithms is determined by the tail sum of the singular values. When ∑j>θλj=O(exp(−θ)), we have E[ˆg]−infg∈GE[g]=O(logn/n), which leads to a sharper generalization error bound than that based on global Rademacher complexity.

In this section, the properties of the local Rademacher complexity discussed above are used to devise a new multi-label learning algorithm.

Each training point has a feature vector xi∈Rd and a corresponding label vector yi={0,1}L. If yij=1, example xi will have label-j; otherwise, there is no label-j for example xi. The multi-label predictor is parameterized as f(x,W)=WTx, where W∈Rd×L. ℓ(y,f(x,W))∈R is the loss function that computes the discrepancy between the true label vector and the predicted label vector.

The trace norm is an effective approach for modeling and capturing correlations between labels associated with examples, and it has been widely adopted in many multi-label algorithms (Amit et al., 2007; Loeff and Farhadi, 2008; Cabral et al., 2011; Xu et al., 2013a). Within the ERM framework, their objective functions usually take the form

where ∥⋅∥∗ is the trace norm and C is a constant. In particular, for Problem (11), (Yu et al., 2014) has proved that the global Rademacher complexity of W is upper-bounded in terms of its trace.

where λj(W) is the j-th largest singular value of W, and θ is a parameter to control the tail sum. If we use the squared L2-loss function, we get

To understand why the trace norm may fail in rank minimization, we consider a matrix

Starting with Eq. (13) without the norm regularization, we get the following problem,

where X is the data matrix and Y is the label matrix. The gradient method is a natural approach for solving this problem and generates a sequence of approximate solutions:

Since Eq. (17) can be regarded as a linear approximation of the function f at point Wk−1 regularized by a quadratic proximal term, Problem (13) can be solved in the following iterative step:

where the terms in Eq. (17) that do not depend on W are ignored.

Recall that if problem (18) is constrained with the trace norm, (Cai et al., 2010) showed that it can be efficiently solved using the singular value thresholding algorithm. Hence, we propose a new conditional singular value thresholding algorithm to handle the newly proposed norm regularization. The solution is summarized in the following theorem.

Assuming that ˆW is the optimal solution, 0 should be a subgradient of the objective function at the point ˆW,

where ∂(∑j>θλj(ˆW)) is the set of subgradients of the new norm regularization. Letting W=UΣVT, we have

in the identity matrix

I as zeros. Set the SVD of Q as

where U0,V0 are the singular vectors associated with singular values greater than C, while U1,V1 correspond to those smaller than or equal to C. With these definitions, we have

where S is defined as C−1U1Σ1VT1. The proof is completed. It turns out that the minimization of Problem (18) can be solved by first computing the SVD of (Wk−1−1tk∇f(Wk−1)), and then applying the conditional thresholding on the singular values. By exploiting the structure of the newly proposed norm regularization, the convergence rate of the the resulting algorithm is expected to be the same as that of the gradient method. The whole optimization procedure is shown in Algorithm 1.

In this section, we evaluate our proposed algorithm on four datasets from diverse applications: bibtex and delicious for tag recommendation, yeast for gene function prediction, and corel5k for image classification. All these datasets were obtained from Mulan’s website 111http://mulan.sourceforge.net/datasets.html and were pre-separated into training and test sets. Detailed information about these datasets is shown in Table 1.

The details of the competing methods are summarized as follows:

Given a test set, we used four criteria to evaluate the performance of the multi-label predictor:

We first compared the proposed LRML algorithm with the ML-trace and ML-Fro algorithms on the four datasets; the results are reported in Figure 2. For LRML, we varied θ to examine the influence of the number of constrained singular values. As shown in Figure 2, when θ is smaller, the performance of LRML is limited, because the rank of the learned multi-label predictor is too low to cover all the information from different labels. With increasing θ, LRML discovers the optimal multi-label predictor with appropriate rank and achieves stable performance. Compared to ML-trace, which constrains over all the singular values, the best LRML performance usually offers further improvements by tightly approximating the rank of the multi-label predictor. Moreover, it is important to note that ML-Fro is of comparable performance to LRML and ML-trace on the yeast dataset. This is not surprising, since this dataset has a relatively small number of labels, and thus the influence of the low-rank structure is limited.

We next compared LRML algorithm with the current state-of-the-art LEML and CPLST algorithms. Since all three of these algorithms are implicitly or explicitly designed to exploit the low-rank structure, we accessed their performances using varying dimensionality reduction ratios. The results are summarized in Table 2.

LRML either improves on, or has comparable performance with, the other methods for nearly all settings. Although these algorithms all focus on the low-rank structure of the predictor in multi-label learning, they study and discover it from different perspectives. LEML factorizes the trace norm by introducing two low-rank matrices, while CPLST learns the multi-label predictor by first learning an encoder to encode the multiple labels. Compared to proposed LRML algorithm, which directly constrains the tail singular values of the predictor to obtain a low-rank structure, both LEML and CPLST increase the number of free parameters in pursuing the low rank, as a result, the optimization complexity will largely increases with large numbers of labels. In addition, since the objective function of LRML is an explicit minimization of the local Rademacher complexity, it will lead to a tight generalization error bound and guarantee stable performances for unseen examples.

In order to investigate the convergence behaviors of LRML, we plot the objective values of LRML on the yeast dataset in Figure 3. We can observe that LRML converges fast in different cases. This confirms that the proposed conditional singular value thresholding algorithm can efficiently solve LRML.