We consider the recovery of signals from their observations, which are samples of a transform of the signals rather than the signals themselves, by using machine learning (ML). We will develop a theoretical framework to characterize the signals that can be robustly recovered from their observations by an ML algorithm, and establish a Lipschitz condition on signals and observations that is both necessary and sufficient for the existence of a robust recovery. We will compare the Lipschitz condition with the well-known restricted isometry property of the sparse recovery of compressive sensing, and show the former is more general and less restrictive. For linear observations, our work also suggests an ML method in which the output space is reduced to the lowest possible dimension. 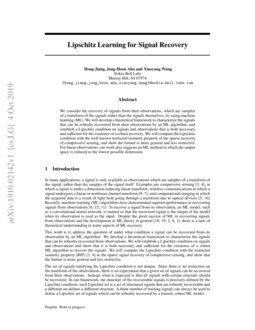 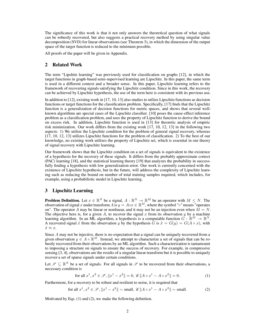 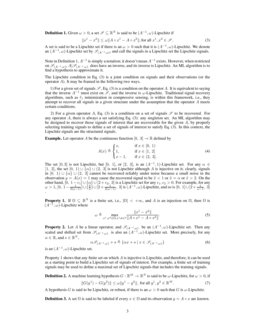 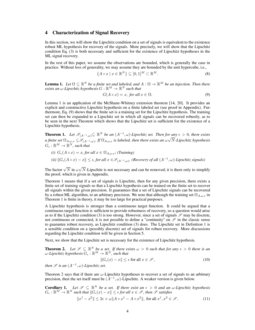 In many applications, a signal is only available as observations which are samples of a transform of the signal, rather than the samples of the signal itself. Examples are compressive sensing Candès (2006); Candès and Tao (2005)

. To recover a signal from its observation, an ML model, such as a convolutional neural network, is trained so that the recovered signal is the output of the model when its observation is used as the input. Despite the great success of ML in recovering signals from observations and the development in ML theory in general

This work is to address the question of under what condition a signal can be recovered from its observation by an ML algorithm. We develop a theoretical framework to characterize the signals that can be robustly recovered from observations. We will establish a Lipschitz condition on signals and observations and show that it is both necessary and sufficient for the existence of a robust ML algorithm to recover the signals. We will compare the Lipschitz condition with the restricted isometry property (RIP) Candès (2006); Candès and Tao (2005) in the sparse signal recovery of compressive sensing, and show that the former is more general and less restrictive.

The set of signals satisfying the Lipschitz condition is not unique. Since there is no restriction on the transform of the observations, there is no expectation that a given set of signals can be recovered from their observations. Instead, what is expected is that all signals with certain structure should be recovered. In our framework, the structure of the recoverable signals is precisely defined by the Lipschitz condition: each Lipschitz set is a set of structured signals that are robustly recoverable and a different set defines a different structure. A finite number of training signals can always be used to define a Lipschitz set of signals which can be robustly recovered by a trained, robust ML model.

The significance of this work is that it not only answers the theoretical question of what signals can be robustly recovered, but also suggests a practical recovery method by using singular value decomposition (SVD) for linear observations (see Theorem 3), in which the dimension of the output space of the target function is reduced to the minimum possible.

All proofs of the paper will be given in Appendix.

, in which the target functions in graph-based semi-supervised learning are Lipschitz. In this paper, the same term is used in a different context and a broader sense. In this paper, Lipschitz learning refers to the framework of recovering signals satisfying the Lipschitz condition. Since in this work, the recovery can be achieved by Lipschitz hypothesis, the use of the term here is consistent with its previous use.

finds that the Lipschitz function is a generalization of decision functions for metric spaces, and shows that several well-known algorithms are special cases of the Lipschitz classifier.

Our framework shows that the Lipschitz condition on a set of signals is equivalent to the existence of a hypothesis for the recovery of these signals. It differs from the probably approximate correct (PAC) learning

, and the statistical learning theory

Vapnik (2000) that analyzes the probability in successfully finding a hypothesis with low generalization error. Our work is currently concerned with the existence of Lipschitz hypothesis, but in the future, will address the complexity of Lipschitz learning such as reducing the bound on number of total training samples required, which includes, for example, using a probabilistic model in Lipschitz learning.

Problem Definition. Let x∈RN be a signal, A:RN→RM be an operator with M≤N. The observation of signal x under transform A is y=A∘x∈RM, where the symbol "∘" means "operates on". The operator A may be linear or nonlinear, and it may not be an injection even when M=N. The objective here is, for a given A, to recover the signal x from its observation y by a machine learning algorithm. In an ML algorithm, a hypothesis is a computable function G:RM→RN. A recovered signal ~x from the observation y by the hypothesis G is ~x=G(y)=G(A∘x), with ~x≈x.

Since A may not be injective, there is no expectation that a signal can be uniquely recovered from a given observation y∈A∘RM. Instead, we attempt to characterize a set of signals that can be robustly recovered from their observations by an ML algorithm. Such a characterization is tantamount to imposing a structure on signals to ensure the success of recovery. For example, in compressive sensing Candès (2006); Candès and Tao (2005), observations are the results of a singular linear transform but it is possible to uniquely recover a set of sparse signals under certain conditions.

Let S⊆RN be a set of signals. For all signals in S to be recovered from their observations, a necessary condition is

Furthermore, for a recovery to be robust and resilient to noise, it is required that

Motivated by Eqs. (1) and (2), we make the following definition.

Note in Definition 1, A−1 is simply a notation; it doesn’t mean A−1 exists. However, when restricted on S(A−1,ω), A|S(A−1,ω)  does have an inverse, and its inverse is Lipschitz. An ML algorithm is to find a hypothesis to approximate it.

The Lipschitz condition in Eq. (3) is a joint condition on signals and their observations (or the operator A). It may be framed in the following two ways.

1) For a given set of signals S, Eq. (3) is a condition on the operator A. It is equivalent to saying that the inverse A−1 must exist on S, and the inverse is ω-Lipschitz. Traditional signal recovery algorithms, such as ℓ1 minimization in compressive sensing, is within this framework, i.e., they attempt to recover all signals in a given structure under the assumption that the operator A meets certain conditions.

2) For a given operator A, Eq. (3) is a condition on a set of signals S to be recovered. For any operator A, there is always a set satisfying Eq. (3): any singleton set. An ML algorithm may be designed to recover those signals of interest that are recoverable for the given A, by properly selecting training signals to define a set of signals of interest to satisfy Eq. (3). In this context, the Lipschitz signals are the structured signals.

Example. Let operator A be the continuous function [0, 3]→R defined by

Definition 2. A machine learning hypothesis G:RM→RN is said to be ω-Lipschitz, for ω>0, if

A hypothesis G is said to be Lipschitz, or robust, if there is an ω>0 such that G is ω-Lipschitz.

Definition 3. A set Ω is said to be labeled if every x∈Ω and its observation y=A∘x are known.

In the rest of this paper, we assume the observations are bounded, which is generally the case in practice. Without loss of generality, we may assume they are bounded by the unit hypercube, i.e.,

Lemma 1. Let Ω⊆RN be a finite set and labeled, and A:Ω→RM be an injection. Then there exists an ω-Lipschitz hypothesis G:RM→RN such that

The factor √N in ω√N-Lipschitz is not necessary and can be removed; it is there only to simplify the proof, which is given in Appendix.

Theorem 1 means that if a set of signals is Lipschitz, then for any given precision, there exists a finite set of training signals so that a Lipschitz hypothesis can be trained on the finite set to recover all signals within the given precision. It guarantees that a set of Lipschitz signals can be recovered by a robust ML algorithm, to an arbitrary precision. We note that although the training set ΩA,ω,ϵ in Theorem 1 is finite in theory, it may be too large for practical purposes.

Next, we show that the Lipschitz set is necessary for the existence of Lipschitz hypothesis.

Theorem 2. Let S⊆RN be a set. If there exists ω>0 such that for any ϵ>0 there is an ω-Lipschitz hypothesis Gϵ:RM→RN, such that

Theorem 2 says that if there are ω-Lipschitz hypotheses to recover a set of signals to an arbitrary precision, then the set itself must be (A−1,ω)-Lipschitz. A weaker version is given below.

Corollary 1. Let S⊆RN be a set. If there exist an ϵ>0 and an ω-Lipschitz hypothesis Gϵ:RM→RN such that ∥Gϵ(x)−x∥≤ϵ for all x∈S, then S satisfies

Theorems 1 and 2 completely characterize robust ML signal recovery: a set of signals can be robustly recovered by ML algorithms if and only if the set satisfies the Lipschitz condition (3).

For linear operators, we have a stronger version of Theorem 1 as follows.

(iii) A(R(Ax))=Ax, for all x∈RN. (Recovered signals match the observations)

In this section, we assume the operator A is linear, i.e., A∈RM×N.

Let S≤N, T⊂{1,...,N}, and AT be the M×|T| submatrix obtained by extracting the columns of A corresponding to the indices in T. A is said to satisfy S-restricted isometry property (RIP) if there exists δS∈(0,1) such that

for all subsets T with |T|≤S and coefficient sequences (cj)j∈T. δS is said to be S-restricted isometry constant. It is shown in Candès and Tao (2005) that if A satisfies the RIP with

Sparse signals with RIP conditions (12) and (13) are Lipschitz

Although we have provided a complete characterization of ML signal recovery in theory, more work is needed to render this theoretical framework for practical use in general. For example, the bound on the total number of training signals required to guarantee robust recovery in this framework is too high to be used in practice. However, this theoretical work does provide insights that can guide the design of practical ML signal recovery algorithms. For linear systems, Theorem 3 suggests a practical method of using SVD to reduce the dimension of the output space of an ML model from RN to RN−M, which is the minimum possible dimension on which a recovery algorithm must learn.

Proof of Property 1. If Ω⊆RN is a finite set and A is injective on Ω, then ω is well-defined in (5), and furthermore,

which shows G is ω-Lipschitz. From (17), it’s easy to verify that G(A∘x)=x. Q.E.D.  It is important to point out that Eq.(17) provides an explicit and constructive Lipschitz hypothesis.

Each vj in (22) is a hypercube in RM of length 1t in each dimension, and therefore, we have

Without loss of generality, we assume A∈RM×N is full rank (if not, M can be reduced until it is). Performing the singular value decomposition (SVD) of A, we have

Note that the output space of the hypothesis Gϵ in (33) has dimension N−M, instead of N in Theorem 1. Now define R:RM→RN by

The following shows (i):