The method of "random Fourier features (RFF)" has become a popular tool for approximating the "radial basis function (RBF)" kernel. The variance of RFF is actually large. Interestingly, the variance can be substantially reduced by a simple normalization step as we theoretically demonstrate. We name the improved scheme as the "normalized RFF (NRFF)". We also propose the "generalized min-max (GMM)" kernel as a measure of data similarity. GMM is positive definite as there is an associated hashing method named "generalized consistent weighted sampling (GCWS)" which linearizes this nonlinear kernel. We provide an extensive empirical evaluation of the RBF kernel and the GMM kernel on more than 50 publicly available datasets. For a majority of the datasets, the (tuning-free) GMM kernel outperforms the best-tuned RBF kernel. We conduct extensive experiments for comparing the linearized RBF kernel using NRFF with the linearized GMM kernel using GCWS. We observe that, to reach a comparable classification accuracy, GCWS typically requires substantially fewer samples than NRFF, even on datasets where the original RBF kernel outperforms the original GMM kernel. The empirical success of GCWS (compared to NRFF) can also be explained from a theoretical perspective. Firstly, the relative variance (normalized by the squared expectation) of GCWS is substantially smaller than that of NRFF, except for the very high similarity region (where the variances of both methods are close to zero). Secondly, if we make a model assumption on the data, we can show analytically that GCWS exhibits much smaller variance than NRFF for estimating the same object (e.g., the RBF kernel), except for the very high similarity region. 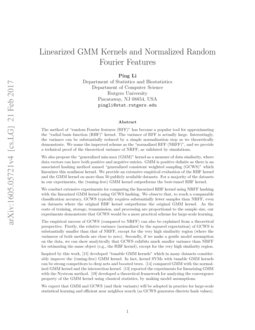 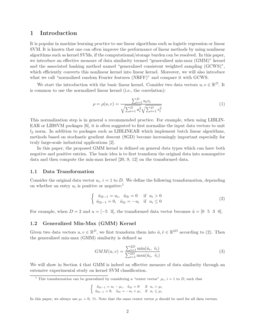 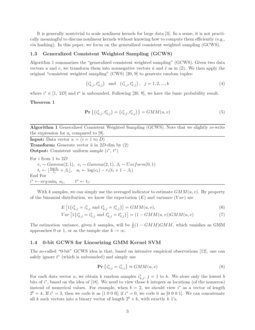 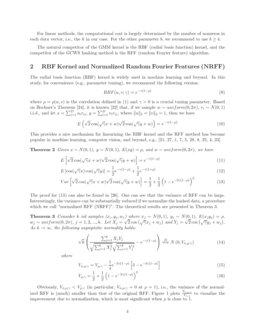 While tree methods have been popular in practice, researchers and practi...
Ping Li, et al. ∙

The min-max kernel is a generalization of the popular resemblance kernel...
Ping Li, et al. ∙

It is popular in machine learning practice to use linear algorithms such as logistic regression or linear SVM. It is known that one can often improve the performance of linear methods by using nonlinear algorithms such as kernel SVMs, if the computational/storage burden can be resolved. In this paper, we introduce an effective measure of data similarity termed “generalized min-max (GMM)” kernel and the associated hashing method named “generalized consistent weighted sampling (GCWS)”, which efficiently converts this nonlinear kernel into linear kernel. Moreover, we will also introduce what we call “normalized random Fourier features (NRFF)” and compare it with GCWS.

We start the introduction with the basic linear kernel. Consider two data vectors u,v∈RD. It is common to use the normalized linear kernel (i.e., the correlation):

This normalization step is in general a recommended practice. For example, when using LIBLINEAR or LIBSVM packages [6], it is often suggested to first normalize the input data vectors to unit l2

In this paper, the proposed GMM kernel is defined on general data types which can have both negative and positive entries. The basic idea is to first transform the original data into nonnegative data and then compute the min-max kernel [20, 9, 12] on the transformed data.

Consider the original data vector ui, i=1 to D. We define the following transformation, depending on whether an entry ui is positive or negative:111 This transformation can be generalized by considering a “center vector” μi, i=1 to D, such that

In this paper, we always use μi=0, ∀i. Note that the same center vector μ should be used for all data vectors.

Given two data vectors u,v∈RD, we first transform them into ~u,~v∈R2D according to (2). Then the generalized min-max (GMM) similarity is defined as

We will show in Section 4 that GMM is indeed an effective measure of data similarity through an extensive experimental study on kernel SVM classification.

It is generally nontrivial to scale nonlinear kernels for large data [3]. In a sense, it is not practically meaningful to discuss nonlinear kernels without knowing how to compute them efficiently (e.g., via hashing). In this paper, we focus on the generalized consistent weighted sampling (GCWS).

, we have the basic probability result.

With k samples, we can simply use the averaged indicator to estimate GMM(u,v)

. By property of the binomial distribution, we know the expectation (

E) and variance (Var) are

The estimation variance, given k samples, will be 1k(1−GMM)GMM, which vanishes as GMM approaches 0 or 1, or as the sample size k→∞.

The so-called “0-bit” GCWS idea is that, based on intensive empirical observations [12], one can safely ignore t∗ (which is unbounded) and simply use

For linear methods, the computational cost is largely determined by the number of nonzeros in each data vector, i.e., the k in our case. For the other parameter b, we recommend to use b≥4.

The radial basis function (RBF) kernel is widely used in machine learning and beyond. In this study, for convenience (e.g., parameter tuning), we recommend the following version:

This provides a nice mechanism for linearizing the RBF kernel and the RFF method has become popular in machine learning, computer vision, and beyond, e.g.,

The proof for (13) can also be found in [26]. One can see that the variance of RFF can be large. Interestingly, the variance can be substantially reduced if we normalize the hashed data, a procedure which we call “normalized RFF (NRFF)”. The theoretical results are presented in Theorem 3.

Obviously, Vn,ρ,γ<Vρ,γ (in particular, Vn,ρ,γ=0 at ρ=1), i.e., the variance of the normalized RFF is (much) smaller than that of the original RFF. Figure 1 plots Vn,ρ,γVγ,γ to visualize the improvement due to normalization, which is most significant when ρ is close to 1.

Note that the theoretical results in Theorem 3 are asymptotic (i.e., for larger k). With k samples, the variance of the original RFF is exactly Vρ,γk, however the variance of the normalized RFF (NRFF) is written as Vn,ρ,γk+O(1k2). It is important to understand the behavior when k is not large. For this purpose, Figure 2 presents the simulated mean square error (MSE) results for estimating the RBF kernel e−γ(1−ρ), confirming that a): the improvement due to normalization can be substantial, and b): the asymptotic variance formula (15) becomes accurate for merely k>10.

Next, we attempt to compare RFF with GCWS. While ultimately we can rely on classification accuracy as a metric for performance, here we compare their variances (Var) relative to their expectations (E) in terms of Var/E2, as shown in Figure 3. For GCWS, we know Var/E2=E(1−E)/E2=(1−E)/E. For the original RFF, we have Var/E2=[12+12(1−E2)2]/E2, etc.

Figure 3 shows that the relative variance of GCWS is substantially smaller than that of the original RFF and the normalized RFF (NRFF), especially when E is not large. For the very high similarity region (i.e., E→1), the variances of both GCWS and NRFF approach zero.

The results from Figure 3 provide one explanation why later we will observe that, in the classification experiments, GCWS typically needs substantially fewer samples than the normalized RFF, in order to achieve similar classification accuracies. Note that for practical data, the similarities among most data points are usually small (i.e., small E) and hence it is not surprising that GCWS may perform substantially better. Also see Section 3 and Figure 4 for a comparison from the perspective of estimating RBF using GCWS based on a model assumption.

Proof of Theorem 2:  The following three integrals will be useful in our proof:

This completes the proof of the first moment. Next, using the following fact

we are ready to compute the second moment

Finally, we prove the first moment without the “w

This completes the proof of Theorem 2.

We express the deviation Zk−Z∞ as

and we can ignore the higher-order term.

Therefore, to analyze the asymptotic variance, it suffices to study the following expectation

which can be obtained from the results in the proof of Theorem 2. In particular, if b1=b2, then