Linear time algorithm to check the singularity of block graphs 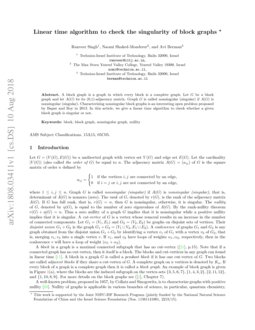 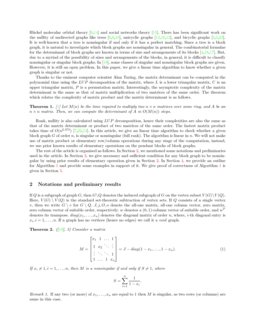 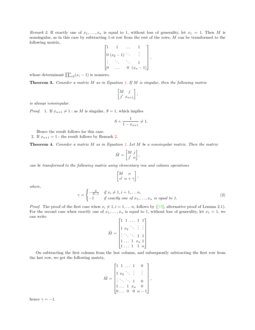 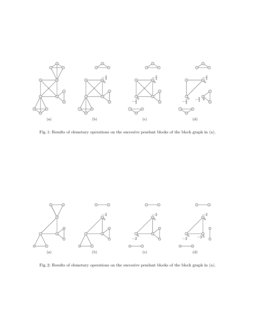 Let G=(V(G),E(G)) be a undirected graph with vertex set V(G) and edge set E(G). Let the cardinality |V(G)| (also called the order of G) be equal to n. The adjacency matrix A(G)=(aij) of G is the square matrix of order n defined by

is equal to the number of zero eigenvalues of

A(G). By the rank-nullity theorem r(G)+η(G)=n. Thus a zero nullity of a graph G implies that it is nonsingular while a positive nullity implies that it is singular. A cut-vertex of G is a vertex whose removal results in an increase in the number of connected components. Let G1=(V1,E1) and G2=(V2,E2) be graphs on disjoint sets of vertices. Their disjoint union G1+G2 is the graph G1+G2=(V1∪V2,E1∪E2). A coalescence of graphs G1 and G2 is any graph obtained from the disjoint union G1+G2 by identifying a vertex v1 of G1 with a vertex v2 of G2, that is, merging v1,v2 into a single vertex v. If v1, and v2 have loops of weights α1,α2, respectively, then in the coalescence v will have a loop of weight (α1+α2).

A block in a graph is a maximal connected subgraph that has no cut-vertex ([21], p.15). Note that if a connected graph has no cut-vertex, then it itself is a block. The blocks and cut-vertices in any graph can found in linear time [11]. A block in a graph G is called a pendant block if it has one cut-vertex of G. Two blocks are called adjacent blocks if they share a cut-vertex of G. A complete graph on n vertices is denoted by Kn. If every block of a graph is a complete graph then it is called a block graph. An example of block graph is given in Figure 1(a), where the blocks are the induced subgraph on the vertex-sets {3,5,6,7},{1,4,3,2},{2,11,12}, and {1,10,8,9}. For more details on the block graphs see ([2], Chapter 7).

A well-known problem, proposed in 1957, by Collatz and Sinogowitz, is to characterize graphs with positive nullity [20]. Nullity of graphs is applicable in various branches of science, in particular, quantum chemistry, Hückel molecular orbital theory [9, 14] and social networks theory [15]. There has been significant work on the nullity of undirected graphs like trees [6, 8, 10], unicyclic graphs [12, 16, 12], and bicyclic graphs [3, 5, 23]. It is well-known that a tree is nonsingular if and only if it has a perfect matching. Since a tree is a block graph, it is natural to investigate in general which block graphs are nonsingular. The combinatorial formulae for the determinant of block graphs are known in terms of size and arrangements of its blocks [4, 18, 17]

. But, due to a myriad of the possibility of sizes and arrangements of the blocks it is difficult in general to classify nonsingular or singular block graphs. In

[19], some classes of singular and nonsingular block graphs are given. However, it is still an open problem. In this paper, we give a linear time algorithm to determine whether a given graph is singular or not.

[1] Let M(n) be the time required to multiply two n×n matrices over some ring, and A be an n×n matrix. Then, we can compute the determinant of A in O(M(n)) steps.

Rank, nullity is also calculated using LUP decomposition, hence their complexities are also the same as that of the matrix determinant or product of two matrices of the same order. The fastest matrix product takes time of O(n2.373) [7, 22, 13]. In this article, we give a linear time algorithm to check whether a given block graph G of order n, is singular or nonsingular (full rank). The algorithm is linear in n. We will not make use of matrix product or elementary row/column operations during any stage of the computation, instead, we prove first results using elementary row/column operation on matrices and use them to treat pendant blocks of the block graphs.

If Q is a subgraph of graph G, then G∖Q denotes the induced subgraph of G on the vertex subset V(G)∖V(Q). Here, V(G)∖V(Q) is the standard set-theoretic subtraction of vertex sets. If Q consists of a single vertex v, then we write G∖v for G∖Q. J,j,O,o

w denotes a (0,1)-column vector of suitable order. diag(x1,…,xn) denotes the diagonal matrix of order n, where the i-th diagonal entry is xi,i=1,…,n. If a graph has no vertices (hence no edges) we call it a void graph.

3 Transformation of the adjacency matrix

Elementary row/column operations transform the adjacency matrix A(G) into another matrix EA(G), which may have nonzero diagonal entries. The graph corresponding to EA(G) can be obtained by a change of weights on the edges and addition of loops on the vertices in G according to the elementary row/column operations on A(G). This can be seen as follows. Let B be a pendant block of a block graph G, having the cut-vertex v of G. As reordering the vertices of G does not change the rank of G, we can write the adjacency matrix A(G) as the follows.

Let the pendant block B have m vertices.

In view of the above discussion, in order to know whether block graph G is singular or nonsingular, we need to further examine the matrices M12 for m≥3, A(G∖B), for m=2. Note that, M12, is the matrix corresponding to the induced subgraph on the vertex-set V(G)∖V(B∖v) of G, with a loop on the vertex v having weight −m−1m−2. By selecting a pendant block from the graph G∖B (for m=2) or the graph corresponding to M12 ( for m≥3) we can further investigate the rank of G. This process will continue until we cover all the blocks of G. The matrix corresponding to the pendant block at any step is of the form M in Theorem 2.1. Hence we use the prior results from Section 2 to check whether G is singular or not. Examples are given in Figure 1 (nonsingular), Figure 2 (singular) and Figure 3 (singular), where at each step a pendant block is chosen for the elementary row/column operations. The detailed algorithm is given in the next section.

For the purpose of the algorithm we first define two auxiliary operations on a set of sets of integers.

A vertex-set V(Bi) in BV is pendant vertex-set if C(Bi) contains exactly one cut-vertex, that is, |C(Bi)|=1. Let f(p) be the number of times the cut-vetex p appears in CV. Let w(i) be the weight assigned to the vertex i, i=1,…,n of G. We first give an outline of the procedure to check whether a given block graph G is singular or nonsingular. We start with the sets BV,CV. Initially, w(i)=0,i=1,…,n.

END: Let H1,…,Ht be the induced subgraphs of G on the vertex sets in BV with the addition of weighted loops added in the process. If Hi is nonsingular for all i=1,…,t, then G is nonsingular else G is singular. Note that, each of Hi is of form M in Theorem 2.1, hence, using Theorem 2.1, it is checked in linear time whether Hi is singular or nonsingular.

The algorithm of the above outline is given in Algorithm 1. Where the function GSING takes BV,CV as input, and makes recursive use of basic arithmetic, auxiliary operations which take at the most linear time, and check whether the block graph G is singular or not. Now we provide some examples in support of Algorithm 1.

Consider the block graph given in Figure 1(a).

Consider block graph in Figure 3(a). We have,

Just before (i)-th calling of function GSING(BV,CV) in Algorithm 1, the adjacency matrix A(G) is transformed to the matrix Mi which is of the form

Acknowledgments The authors are grateful to Dr. Cheng Zheng for his valuable comments and suggestions.