Under appropriate cooperation protocols and parameter choices, fully decentralized solutions for stochastic optimization have been shown to match the performance of centralized solutions and result in linear speedup (in the number of agents) relative to non-cooperative approaches in the strongly-convex setting. More recently, these results have been extended to the pursuit of first-order stationary points in non-convex environments. In this work, we examine in detail the dependence of second-order convergence guarantees on the spectral properties of the combination policy for non-convex multi agent optimization. We establish linear speedup in saddle-point escape time in the number of agents for symmetric combination policies and study the potential for further improvement by employing asymmetric combination weights. The results imply that a linear speedup can be expected in the pursuit of second-order stationary points, which exclude local maxima as well as strict saddle-points and correspond to local or even global minima in many important learning settings. 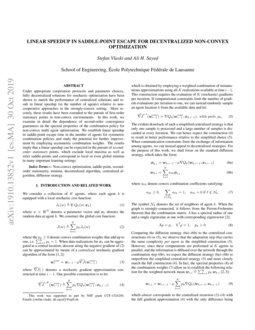 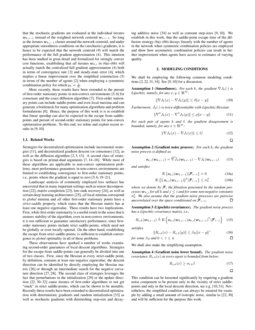 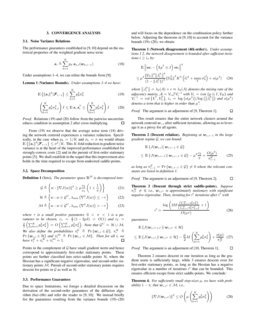 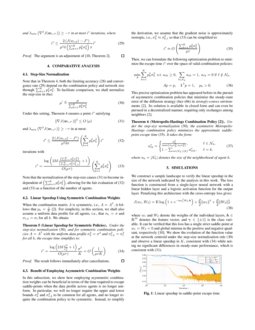 Given a nonconvex function f(x) that is an average of n smooth functions...
Zeyuan Allen-Zhu, et al. ∙

The objective of meta-learning is to exploit the knowledge obtained from...
Mert Kayaalp, et al. ∙

On the Divergence of Decentralized Non-Convex Optimization

We consider a collection of K agents, where each agent k is equipped with a local stochastic cost function:

denotes a parameter vector and

where the pk≥0 denote convex combination weights that add up to one, i.e. ∑Kk=1pk=1. When data realizations for \xk can be aggregated at a central location, descent along the negative gradient of (2) can be approximated by means of a centralized stochastic gradient algorithm of the form [22, 26]:

where ˆ∇J(⋅) denotes a stochastic gradient approximation constructed at time i−1. One possible construction is to let:

which is obtained by employing a weighted combination of instantaneous approximations using all K realizations available at time i−1. This construction requires the evaluation of K (stochastic) gradients per iteration. If computational constraints limit the number of gradient evaluations per iteration to one, we can instead randomly sample an agent location k from the available data and let:

The evident drawback of such a simplified centralized strategy is that only one sample is processed and a large number of samples is discarded at every iteration. We can hence expect the construction (4) to result in better performance relative to the simplified choice (5). When communication constraints limit the exchange of information among agents, we can instead appeal to decentralized strategies. For the purpose of this work, we shall focus on the standard diffusion strategy, which takes the form:

The symbol Nk denotes the set of neighbors of agent k. When the graph is strongly-connected, it follows from the Perron-Frobenius theorem that the combination matrix A

Comparing the diffusion strategy (6a)–(6b) to the centralized constructions (4) or (5), we observe that the adaptation step (6a) carries the same complexity per agent as the simplified construction (5). However, since these computations are performed at K agents in parallel, and the information is diffused over the network through the combination step (6b), we expect the diffusion strategy (6a)–(6b) to outperform the simplified centralized strategy (5) and more closely match the full construction (4). In fact, the spectral properties (8) of the combination weights (7) allow us to establish the following relation for the weighted network mean \wc,i≜∑Kk=1pk\wk,i [6, 26]:

which almost corresponds to the centralized recursion (3)–(4) with the full gradient approximation (4) with the only difference being that the stochastic gradients are evaluated at the individual iterates \wk,i−1 instead of the weighted network centroid \wc,i−1. So long as the iterates \wk,i−1 cluster around the network centroid, and under appropriate smoothness conditions on the (stochastic) gradients, it is hence to be expected that the network centroid (9) will match the performance of the full gradient approximation (4). This intuition has been studied in great detail and formalized for strongly convex cost functions, establishing that all iterates \wk,i in (6a)–(6b) will actually match the centralized full gradient approximation (4) both in terms of convergence rate [6] and steady-state error [7], which implies a linear improvement over the simplified construction (5) in terms of the number of agents [26] when employing a symmetric combination policy for which pk=1K.

Strategies for decentralized optimization include incremental strategies [4], and decentralized gradient descent (or consensus) [28], as well as the diffusion algorithm [26, 6, 32]. A second class of strategies is based on primal-dual arguments [16, 9, 15, 31, 27, 34]. While most of these algorithms are applicable to non-convex optimization problems, most performance guarantees in non-convex environments are limited to establishing convergence to first-order stationary points, i.e., points where the gradient is equal to zero [20, 30, 19, 29, 33].

[17], all local minima correspond to global minima and all other first-order stationary points have a strict-saddle property, which states that the Hessian matrix has at least one negative eigenvalue. These results have two implications. First, while first-order stationarity is a useful result in the sense that it ensures stability of the algorithm, even in non-convex environments, it is not sufficient to guarantee satisfactory performance, since first-order stationary points include strict saddle-points, which need not be globally or even locally optimal. On the other hand, establishing the escape from strict saddle-points, is sufficient to establish convergence to global optimality in all of these problems.

These observations have sparked a number of works examining second-order guarantees of local descent algorithms. Strategies for the escape from saddle-points can generally be divided into one of two classes. First, since the Hessian at every strict-saddle point, by definition, contains at least one negative eigenvalue, the descent direction can be identified by directly employing the Hessian matrix [21] or through an intermediate search for the negative curvature direction [10, 2]. The second class of strategies leverages the fact that perturbations in the initialization [18] or the update direction [11, 5, 14, 25] cause iterates of first-order algorithms to not get “stuck” in strict saddle-points, which can be shown to be unstable. Recently these results have been extended to decentralized optimization with deterministic gradients and random initialization [1] as well as stochastic gradients with diminishing step-size and decaying additive noise [3] as well as constant step-sizes [23, 24]. We establish in this work, that the saddle-point escape time of the diffusion strategy (6a)–(6b

For each pair of agents k and ℓ, the gradient disagreement is bounded, namely, for any x∈RM:

for some βR and 0<γ≤4. We shall also make the simplifying assumption. [Gradient noise lower bound] The gradient noise covariance Rs,k(x) at every agent is bounded from below:

This condition can be loosened significantly by requiring a gradient noise component to be present only in the vicinity of strict saddle-points and only in the local descent direction, see e.g. [14, 24]. Nevertheless, the simplified condition can always be ensured for example by adding a small amount of isotropic noise, similar to [11, 5] and will be sufficient for the purpose this work.

The performance guarantees established in [23, 24] depend on the statistical properties of the weighted gradient noise term:

Relations (19) and (20) follow from the pairwise uncorrelatedness condition in assumption 12 after cross-multiplying. From (19) we observe that the average noise term (18) driving the network centroid experiences a variance reduction. Specifically, in the case when pk=1/K and σk=σ we would obtain \E{∥si∥2|Fi−1}≤σ2/K. This K-fold reduction in gradient noise variance is at the heart of the improved performance established for strongly-convex costs [26] and in the pursuit of first-order stationary points [19]. We shall establish in the sequel that this improvement also holds in the time required to escape from undesired saddle-points.

[Sets] The parameter space RM is decomposed into:

. We also define the probabilities

have small gradient norm and hence correspond to approximately first-order stationary points. These points are further classified into strict-saddle points

Due to space limitations, we forego a detailed discussion on the derivation of the second-order guarantees of the diffusion algorithm (6a)–(6b) and refer the reader to [23, 24]. We instead briefly list the guarantees resulting from the variance bounds (19)–(20) and will focus on the dependence on the combination policy further below. Adjusting the theorems in [23, 24] to account for the variance bounds (19)–(20), we obtain: [Network disagreement (4th order)] Under assumptions 2 12, the network disagreement is bounded after sufficient iterations i≥io by:

where ∥∥J\Tϵ∥∥=λ2(A)+ϵ≈λ2(A) denotes the mixing rate of the adjacency matrix, A=VϵJV−1ϵ with Vϵ=row{p⊗I,VR} and V−1ϵ=col{1\T,V\TL}, and o(μ4) denotes a term that is higher in order than μ4. The argument is an adjustment of [23, Theorem 1]. This result ensures that the entire network clusters around the network centroid \wc,i after sufficient iterations, allowing us to leverage it as a proxy for all agents. [Descent relation] Beginning at \wc,i−1 in the large gradient regime G, we can bound:

as long as πGi−1=Pr{\wc,i−1∈G}≠0 where the relevant constants are listed in definition 3.2. The argument is an adjustment of [23, Theorem 2]. [Descent through strict saddle-points] Suppose πHi⋆≠0, i.e., \wc,i⋆ is approximately stationary with significant negative eigenvalue. Then, iterating for is iterations after i⋆ with

The argument is an adjustment of [24, Theorem 1]. Theorem 3.3 ensures descent in one iteration as long as the gradient norm is sufficiently large, while 3.3 ensures descent even for first-order stationary points, as long as the Hessian has a negative eigenvalue in a number of iterations is that can be bounded. This ensures efficient escape from strict saddle-points. We conclude: For sufficiently small step-sizes μ, we have with probability 1−π, that \wc,io∈M, i.e.,

Note that in Theorem 3.3, both the limiting accuracy (28) and convergence rate (29) depend on the combination policy and network size through ∑Kk=1p2kσ2k. To facilitate comparison, we shall normalize the step-size in (6a):

Under this setting, Theorem 3.3 ensures a point io satisfying

Note that the normalization of the step-size causes (31) to become independent of (∑Kk=1p2kσ2k), allowing for the fair evaluation of (32) and (33) as a function of the number of agents.

When the combination matrix A is symmetric, i.e., A=A\T, it follows that pk=1K [26]. For simplicity, in this section, we shall also assume a uniform data profile for all agents, i.e., that σk=σ and σℓ,k=σℓ for all k. We obtain: [Linear Speedup for Symmetric Policies] Under the step-size normalization (30), and for symmetric combination policies A=A\T with the uniform data profile σ2k=σ2 and σ2ℓ,k=σ2ℓ for all k, the escape time simplifies to:

The result follows immediately after cancellations.

In this subsection, we show how employing asymmetric combination weights can be beneficial in terms of the time required to escape saddle-points when the data profile across agents is no longer uniform. In particular, we will no longer require the upper and lower bounds σ2k and σ2ℓ,k to be common for all agents, and no longer require the combination policy to be symmetric. Instead, to simplify the derivation, we assume that the gradient noise is approximately isotropic, i.e., σ2k≈σ2k,ℓ so that (33) can be simplified to:

Then, we can formulate the following optimization problem to minimize the escape time is over the space of valid combination policies:

This precise optimization problem has appeared before in the pursuit of asymmetric combination policies that minimize the steady-state error of the diffusion strategy (6a)–(6b) in strongly-convex environments [26]. Its solution is available in closed form and can even be pursued in a decentralized manner, requiring only exchanges among neighbors [26]. [Metropolis-Hastings Combination Policy [26]] Under the step-size normalization (30), the asymmetric Metropolis-Hastings combination policy minimizes the approximate saddle-point escape time (35). It takes the form:

where nk=|Nk| denotes the size of the neighborhood of agent k.

We construct a sample landscape to verify the linear speedup in the size of the network indicated by the analysis in this work. The loss function is constructed from a single-layer neural network with a linear hidden layer and a logistic activation function for the output layer. Penalizing this architecture with the cross-entropy loss gives:

where w1 and W2 denote the weights of the individual layers, \h∈RM denotes the feature vector, and γ∈{±1} is the class variable. It can be verified that this loss has a single strict saddle-point at w1=W2=0 and global minima in the positive and negative quadrant, respectively [24]. We show the evolution of the function value at the network centroid under the step-size normalization rule (30) and observe a linear speedup in K, consistent with (34) while noting no significant differences in steady-state performance, which is consistent with (31).