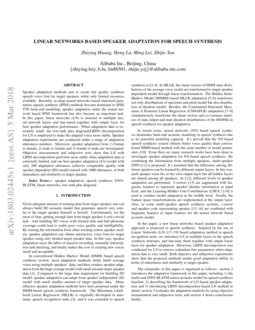 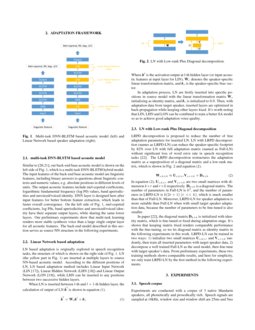 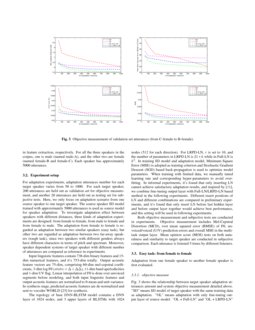 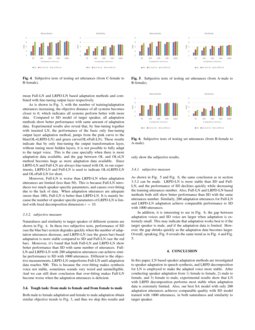 In this paper, a text-to-rapping/singing system is introduced, which can...
Konstantinos Markopoulos, et al. ∙

In this paper, we explore the possibility of speech synthesis from low q...
Sunghee Jung, et al. ∙

Given adequate amount of training data from target speaker, one can always build SD acoustic model that generates speech very similar to the target speaker himself or herself. Unfortunately, for the most of time, getting enough data from target speaker is not a trivial task. And building SD voices with limited data and bad phoneme coverage could lead to really poor voice quality and intelligibility. By reusing the information from other existing source speaker models, speaker adaptation can obtain satisfactory voice font for target speaker using only limited target speaker data. In this way, speaker adaptation saves the labor of massive recording, manually transcription and checking, and finally makes the cost of creating new voices small and acceptable.

. In MLLR, the mean vectors of HMM state distributions of the average voice model are transformed to target speaker dependent model through linear transformation. The Hidden Semi-Markov Model (HSMM) based MLLR adaptation

[5, 6] transforms not only distributions of spectrum and pitch model but also distribution of duration model. Besides, the Constrained Structural Maximum A Posterior Linear Regression (CSMAPLR) adaptation [7, 8, 9]

simultaneously transforms the mean vectors and co-variance matrices of state output and state duration distributions of the HSMMs in speech synthesis for speaker adaptation.

In recent years, neural networks (NN) based speech synthesis dominates back-end acoustic modeling in speech synthesis due to its powerful modeling capacity. It’s proved that the NN-based speech synthesis system obtains better voice quality than conventional HMM-based method with the same number of model parameters [10]. From then on, many research works have been done to investigate speaker adaptation for NN-based speech synthesis. By combining the information from multiple speakers, multi-speaker DNN [11] is proposed. It’s assumed that the difference among different speakers can be learned by different output layers. In this way, each speaker owns his or her own output layer but all hidden layers are shared among all speakers. In [12], different levels of speaker adaptation are performed. I-vectors [13] are augmented with linguistic features to represent speaker identity information at input level, and the Learning Hidden Unit Contributions (LHUC) [14] is used to conduct model adaptation at the middle level. Finally, the feature space transformations are implemented at the output layer. Also, in some multi-speaker speech synthesis systems, i-vector and speaker code representing speaker [15, 16] are combined with linguistic features as input features for the neural network based acoustic model.

In this paper, a new linear networks based speaker adaptation approach is proposed in speech synthesis. Inspired by the use of Linear Networks (LN) [17, 18, 19] based adaptation method in speech recognition tasks, we introduce LN at multiple layers in the speech synthesis structure, and fine-tune them together with output linear layer for speaker adaptation. Moreover, LRPD decomposition was conducted for LN to remove redundant free parameters when adaptation data is very small. Both objective and subjective experiments show that the proposed methods render good adaptation ability in terms of naturalness and similarity to target speaker.

The remainder of this paper is organized as follows: section 2 introduces the adaptation framework in this paper, including 1) the multi-task DNN-BLSTM source acoustic model for speech synthesis baseline, 2) describing the framework of LN based speaker adaptation and 3) introducing LRPD decomposition based LN method in detail, section 3 evaluates the adaptation methods by using objective measurement and subjective tests, and section 4 draws conclusions finally.

, which is a multi-task DNN-BLSTM hybrid model. The input features of the back-end base acoustic model are linguistic features, including binary answers to questions about linguistic contexts and numeric values, e.g. absolute positions in different levels of units. The output acoustic features include mel-cepstral coefficients, logarithmic fundamental frequency (log F0) values, band aperiodicities and unvoiced/voiced identity. DNN layer is designed here after input features for better bottom feature extraction, which leads to faster overall convergence. On the left side of Fig.

LN based adaptation is originally explored in speech recognition tasks, the structure of which is shown on the right side of Fig. 1. LN (the yellow part in Fig. 1) are inserted at multiple layers to source NN-based acoustic model. According to the different positions of LN, LN based adaptation method includes Linear Input Network (LIN [17]), Linear Hidden Network (LHN [18]) and Linear Output Network (LON [19]), while LHN can be inserted to any positions between two successive hidden layers.

When LN is inserted between l-th and l+1-th hidden layer, the calculation of output of LN ^{h}l is shown in equation (1).

Where {h}l is the activation output at l-th hidden layer (or input acoustic features at input layer for LIN), Ws denotes the speaker-specific linear transformation matrix, and {b}s

is the speaker-specific bias vector.

In adaptation process, LN are firstly inserted into specific positions in source model with the linear transformation matrix Ws

initializing as identity matrix, and

{b}s is initialized to 0.0. Then, with adaptation data from target speaker, inserted layers are optimized in back-propagation while keeping other layers fixed. It’s worth noting that LIN, LHN and LON can be combined to train a better SA model so as to achieve good adaptation voice quality.

2.3 LN with Low-rank Plus Diagonal decomposition

In paper [22], the diagonal matrix Dk×k is initialized with identity matrix, which is fine-tuned or fixed during adaptation stage. It’s shown that keeping matrix fixed renders comparable performance with the fine-tuning, so we fix diagonal matrix as identity matrix in the following experiments in this work. LRPD-LN can be trained in two ways: 1) initialize two small matrices Us,k×r and Vs,r×k randomly, then train all inserted parameters with target speaker data, 2) decompose a well trained Full-LN as the seed model, then fine-tune with target speaker’s data. From preliminary experiments, these two training methods shows comparable results, and here for simplicity, we only train LRPD-LN by the first method in the following experiments.

Experiments are conducted with a corpus of 3 native Mandarin speakers, all phonetically and prosodically rich. Speech signals are sampled at 16kHz, window size and window shift are 25ms and 5ms in feature extraction, respectively. For all the three speakers in the corpus, one is male (named male-A), and the other two are female (named female-B and female-C). Each speaker has approximately 5000 utterances.

3.3 Easy task: from female to female

As is shown in Fig. 3, with the number of training/adaptation utterances increasing, the objective distance of all systems becomes closer to 0, which indicates all systems perform better with more data. Compared to SD model of target speaker, all adaptation methods show better performance with same amount of adaptation data. Experimental results also reveal that, by fine-tuning together with inserted LN, the performance of the basic only fine-tuning output layer adaptation method, jumps from the pink curve to the blue(OL+LRPD-LN) and green curve(OL+Full-LN). These results indicate that by only fine-tuning the output transformation layer, without tuning more hidden layers, it is not possible to fully adapt to the target voice. This is the case specially when there is more adaptation data available, and the gap between OL and OL+LN method becomes huge as more adaptation data available. Since LRPD-LN and Full-LN are always fine-tuned with OL in our experiments, LRPD-LN and Full-LN is used to indicate OL+LRPD-LN and OL+Full-LN for short.

Moreover, Full-LN is worse than LRPD-LN when adaptation utterances are limited (less than 50). This is because Full-LN introduces too much speaker-specific parameters, and causes over-fitting due to the lack of data. When adaptation utterances are adequate (more than 100), Full-LN is better than LRPD-LN. It is mainly because the number of speaker specific parameters of LRPD-LN is limited with fixed decomposition dimension r=10.

Naturalness and similarity to target speaker of different systems are shown in Fig. 4. In these two subjective tests, performance of SD (see the blue bar) system degrades quickly when the number of adaptation utterances decrease, and LRPD-LN (see the green bar) based adaptation is more stable compared to SD and Full-LN (see the red bar). Moreover, it’s found that both Full-LN and LRPD-LN show better performance than SD with same number of utterances. Full-LN and LRPD-LN with 200 adaptation utterances can achieve similar performance to SD with 1000 utterances. Different to the objective measurements, LRPD-LN outperforms Full-LN until adaptation data reaches 500. This is because the over-fitting makes synthesis voice not stable, sometimes sounds very weird and unintelligible. And we can still draw conclusion that over-fitting makes Full-LN become worse when the adaptation utterances is deficient.

3.4 Tough task: from male to female and from female to male

Both male to female adaptation and female to male adaptation obtain similar objective trends to Fig. 3, and thus we skip this results and only show the subjective results.

In addition, it is interesting to see in Fig. 6, the gap between adaptation voices and SD voice are larger when adaptation is extremely small. This may indicate that adaptation works best to if the target speaker is male, and if the adaptation data is limited. However, the gap shrinks quickly as the adaptation data becomes larger. Overall, speaking, Fig. 6 reveals the same trend as in Fig. 4 and Fig. 5.