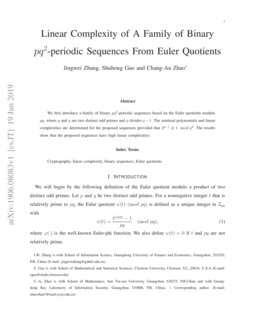 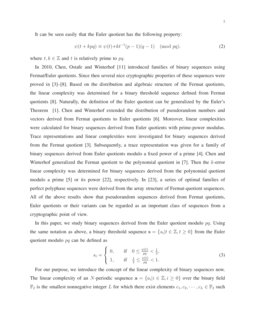 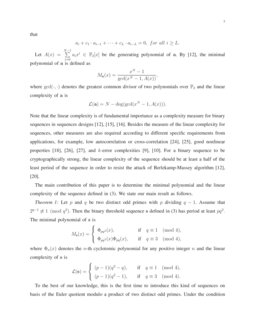 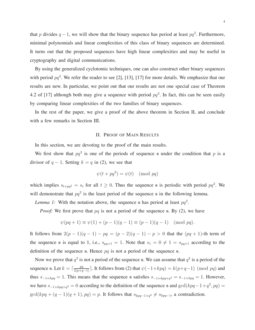 A note on an OACF-preserving operation based on Parker's Transformation

where φ(⋅) is the well-known Euler-phi function. We also define ψ(t)=0 if t and pq are not relatively prime.

It can be seen easily that the Euler quotient has the following property:

where t,k∈Z and t is relatively prime to pq.

In 2010, Chen, Ostafe and Winterhof[11] introduced families of binary sequences using Fermat/Euler quotients. Since then several nice cryptographic properties of these sequences were proved in [6, 7, 8, 3, 5, 4]. Based on the distribution and algebraic structure of the Fermat quotients, the linear complexity was determined for a binary threshold sequence defined from Fermat quotients [8]. Naturally, the definition of the Euler quotient can be generalized by the Euler’s Theorem  [1]

. Chen and Winterhof extended the distribution of pseudorandom numbers and vectors derived from Fermat quotients to Euler quotients

where gcd(⋅,⋅) denotes the greatest common divisor of two polynomials over F2 and the linear complexity of a is

The main contribution of this paper is to determine the minimal polynomial and the linear complexity of the sequence defined in (3). We state our main result as follows.

Let p and q be two distinct odd primes with p dividing q−1. Assume that 2q−1≢1(modq2). Then the binary threshold sequence s defined in (3) has period at least pq2. The minimal polynomial of s is

To the best of our knowledge, this is the first time to introduce this kind of sequences on basis of the Euler quotient modulo a product of two distinct odd primes. Under the condition that p divides q−1, we will show that the binary sequence has period at least pq2. Furthermore, minimal polynomials and linear complexities of this class of binary sequences are determined. It turns out that the proposed sequences have high linear complexities and may be useful in cryptography and digital communications.

By using the generalized cyclotomic techniques, one can also construct other binary sequences with period pq2. We refer the reader to see [13, 2, 17] for more details. We emphasize that our results are new. In particular, we point out that our results are not one special case of Theorem 4.2 of [17] although both may give a sequence with period pq2. In fact, this can be seen easily by comparing linear complexities of the two families of binary sequences.

In the rest of the paper, we give a proof of the above theorem in Section II, and conclude with a few remarks in Section III.

In this section, we are devoting to the proof of the main results.

We first show that pq2 is one of the periods of sequence s under the condition that p is a divisor of q−1. Setting k=q in (2), we see that

which implies st+pq2=st for all t≥0. Thus the sequence s is periodic with period pq2. We will demonstrate that pq2 is the least period of the sequence s in the following lemma.

With the notation above, the sequence s has period at least pq2.

We first prove that pq is not a period of the sequence s. By (2), we have

Hence the least period of the sequence s is pq2, which completes the proof of the lemma.

For any integer n≥2, we denote by Zn={0,1,⋯,n−1} all representatives for the residue classes of integers modulo n and by Z∗n all representatives that are relatively prime to n in Zn, respectively. Since the least period of s is pq2, we restrict the action of ψ on Zpq2 sometimes. With a slight abuse of notation, we shall still use the same symbol ψ to denote this restriction of the Euler quotient on Zpq2.

Let g∈Z∗pq2 be a fixed common primitive root of both p and q2. The Chinese Reminder Theorem(CRT) [14] guarantees that there exists an element h of Z∗pq2 such that

The following lemma shows that the map ψ is a group homomorphism when we restrict the action of the map ψ to the unit group Z∗pq2.

Let ψ:t→ψ(t) be the map from ⟨Z∗pq2,⋅⟩ to ⟨pZpq,+⟩, where pZpq={lp∣0≤l≤q−1} contains exactly all of the residue classes which are divisible by p in the addition group Zpq. Then ψ is a surjective group homomorphism.

Let g and h be defined as above. Then the image and kernel of ψ is given as

as p divides q−1. This means that ψ(t) is divisible by p and thus the map ψ is well defined.

For u,v∈Z∗pq2 it follows from the Euler’s Theorem that

which yields the map ψ is a group homomorphism.

Now we show that the map ψ is surjective. There exists some integer t1 such that gq−1=1+t1q with t1≢0(modq) since g is a primitive root in Z∗q2. This implies that

Note that ψ(g)≡0(modp). It follows from the CRT that there exists some positive integer a with a∈Z∗q such that

It follows that pa is one generator of the addition group pZpq. Consequently, the map ψ is surjective and Img(ψ)=pZpq.

It is known that both ψ(g) and ψ(h) are divisible by p. Also,

Combining the above equation with ψ(h)=0(modp), we get h∈Ker(ψ). Therefore, we have

Now we need to show that the kernal Ker(ψ) and the subgroup ⟨gq,h⟩ have the same cardinality. By the Third Isomorphism Theorem [21], we have

This yields that g0⟨gq,h⟩,g1⟨gq,h⟩,⋯,gq−1⟨gq,h⟩ are all cosets of the subgroup ⟨gq,h⟩ of Z∗pq2. It follows that |⟨gq,h⟩|=(p−1)(q−1). On the other hand, according to the Fundamental Homomorphism Theorem [21], we see that

by the homomorphism property of the map ψ. It follows from ψ(g)≡pa(modq) that

Combining the above equality with ψ(^g)=0(modp), we get ψ(^g)=p(modpq). The following lemma describes a partition of Z∗pq2 which will give a new explanation of the definition of the sequence s.

by the homomorphism property of ψ. This means that

Therefore, there exists some element t0∈D0 such that

Hence we have t=^gℓ⋅t0∈^gℓD0=^Dℓ and so Dℓ=^Dℓ. This completes the whole proof of the lemma.

The new explanation of the sequence s will be helpful to determine linear complexities. We will make extensive use of the following lemmas for completing the proof of Theorem 1.

where all the subscripts are certainly understood modulo q. In particular, Dri=^grDi for 0≤r≤q−1.

The study of the behavior of the coset Dℓ under modulo various divisors of pq2 leads to a number of useful lemmas.

For 0≤ℓ<q, we have the following two multiset equalities

where (q−1)∗Z∗p is the multiset in which each element of Z∗p appears with multiplicity q−1, and

where (p−1)∗Z∗q is the multiset in which each element of Z∗q appears with multiplicity p−1.

According to gcd(p−1,q)=1, we see that gq is also a primitive root of Z∗p. If we fix some j0∈Zd, then (u≡gqi+bℓ+j0(modp)) runs through Z∗p when i run throughs Ze. Now we count the multiplicity of each element in Z∗p when i and j run through Ze and Zd respectively. Assume that

There exists q−1d many solutions in the form of i0,i0+(p−1),⋯,i0+(q−1d−1)(p−1). Note that j0 has d choices. This implies that there are (q−1) many elements of Dℓ mapping into one element in Z∗p. In a similar manner, we can prove the second multiset equality in the lemma. This completes the whole proof of the lemma.

It is obvious that the map from Dℓ to Z∗pq with u→u(modpq) is well-defined. Thus it is sufficient to prove that the map is one-to-one since both Dℓ and Z∗pq have the same cardinality.

Note that d=gcd(p−1,q−1). It follows from the above equality that

Since i1 and i2 belong to Ze, we have i1=i2. This completes the whole proof of the lemma.

Let ^g, g∈Z∗pq2 be the same notations as above. For 0≤ℓ<q, we have the following multiset equality

where ^g and g denote (^g(modq2)) and (g(modq2)), respectively. The set ^gℓ⟨gq⟩ is contained in Z∗q2 and (p−1)∗^gℓ⟨gq⟩ is the multiset in which each element of ^gℓ⟨gq⟩ appears with multiplicity p−1.

This means that (u(modq2)) belongs to ^gℓ⟨gq⟩ indeed. So the map from Dℓ to ^gℓ⟨gq⟩ with u→u(modq2) is well-defined. Now we count the multiplicity when u runs through the set Dℓ. Assume that

for some fixed a0∈Zq−1. It follows that

Define Dℓ(x)=∑u∈Dℓxu∈F2[x]. There exists an important connection between the polynomial Dℓ(x) and the cyclotomic polynomial Φn(x) that will allow us to determine the minimal polynomial of sequences s.

Let γ be a fixed pq2-th primitive root of unity and v an element in Zpq2. Then

We distinguish two cases according to the distinct value of the greatest common divisor of v and pq2.

It follows from the definition of cyclotomic polynomials that

Therefore, we get the desired result since the cyclotomic polynomials Φp(x),Φq(x) and Φq2(x) over F2 are relatively prime.

For v∈Zpq2 with gcd(v,pq2)=q, it follows that γv is a pq-th primitive root of unity. On the basis of Lemma 6, we have

This concludes the whole proof of this lemma.

We are now in a position to give a proof of Theorem 1.